Carla Rust (1908-1977) was a blonde German film actress. She appeared as a leading lady in a number of light entertainment films during the Nazi era. She was married to the actor Sepp Rist. 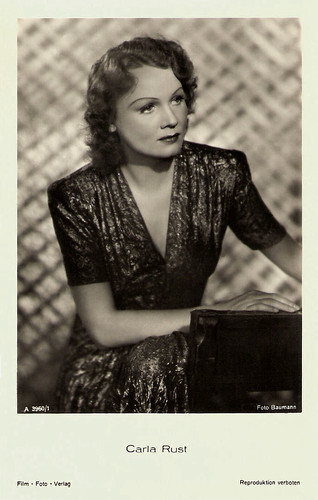 Carla Rust was born in Burgdamm near Bremen, Germany, in 1908. The blonde actress appeared on stage from 1928.

Rust played the central role in the musical revue Es leuchten die Sterne/The Stars Shine (Hans H. Zerlett, 1938). She was a young secretary who travels to Berlin to seek work as an actress. In a comedy of errors, she is mistaken for a famous dancer, which results in her heading the cast of a star-studded musical in Busby Berkeley-style.

The plot was a backdrop for this musical revue film, set as a musical set inside a film studio. Rust headed a cast which included many German stage, sports, and Tobis film stars of the 1930s. Joseph Goebbels, the Nazi Propaganda Minister had commissioned the film to act as a propaganda piece promoting the Third Reich as a cultural entity. 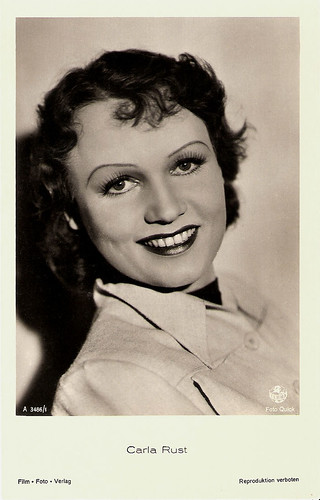 The only anti-Semitic musical comedy released during the Nazi era

Carla Rust co-starred with Mountain Film star Luis Trenker in the romantic comedy Liebesbriefe aus dem Engadin/Love Letters from Engadin or Love Letters from the Engadine (Luis Trenker, Werner Klingler, 1939), set in London and in the Engadin valley in the Swiss Alps, where much of the location shooting took place.

She then costarred with Italian tenor Beniamino Gigli in the Italian comedy Marionette (Carmine Gallone, 1939). 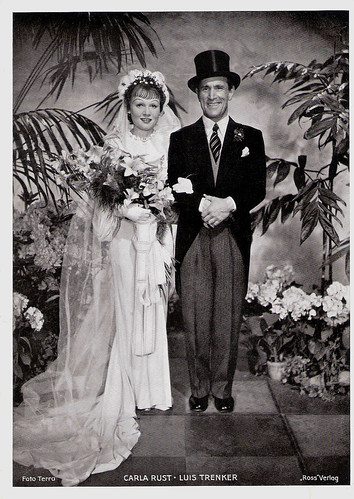 Then followed the German musical comedy Robert und Bertram/Robert and Bertram (Hans Heinz Zerlett, 1939) with Rudi Godden and Kurt Seifert. It was based on the 1856 play 'Robert and Bertram' by Gustav Räder about two wandering vagrants, and it was the only anti-Semitic musical comedy released during the Nazi era and the first film since Kristallnacht to focus on Jews as cultural and economic outsiders.

In 1943, she appeared opposite Anny Ondra in Himmel, wir erben ein Schloß/Heaven, We Inherit a Castle (Peter Paul Brauer, 1943). It was Ondra's last starring role, and the film was shot in German-occupied Prague, Ondra's hometown, by the Prag-Film company.

After Der Adler vom Velsatal/The Eagle of Velsa Valley (Richard Häussler, 1957), she retired from the film business. Carla Rust passed away in 1977 in Hindelang, Bavaria, West Germany. She was 69. 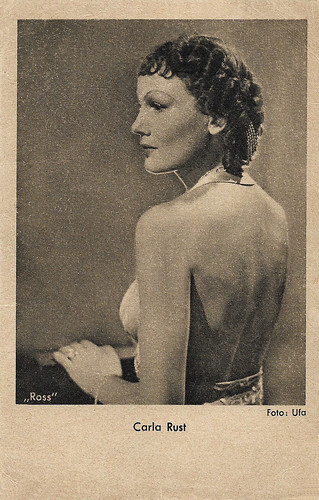 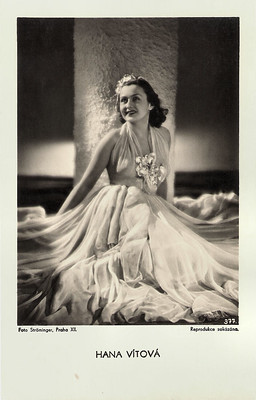