Piper Laurie (1932) is an American stage and screen actress known for her roles in the films The Hustler (1961), Carrie (1976), and Children of a Lesser God (1986), all of which brought her Oscar nominations. She is also known for her performances as Kirsten Arnesen in the original TV production of Days of Wine and Roses (1958) and as Catherine Martell in the cult television series Twin Peaks (1990-1991), for which she won a Golden Globe Award in 1991. She has been nominated twelve times for an Emmy Award. 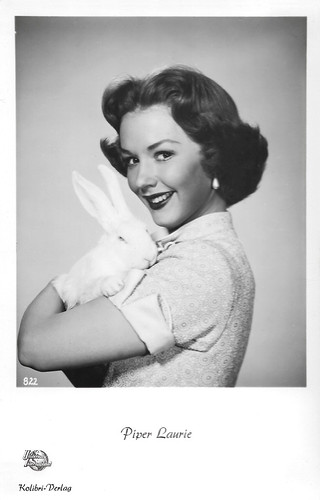 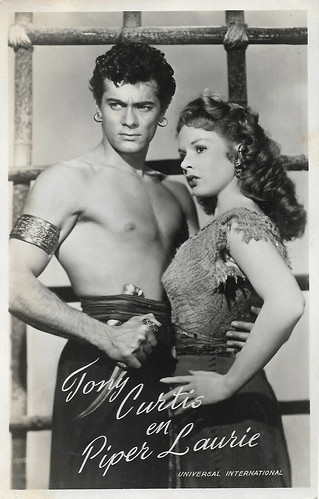 Dutch postcard by Takken, Utrecht, no. 686. Photo: Universal International. Tony Curtis and Piper Laurie in The Prince Who Was A Thief (Rudolph Maté, 1952). 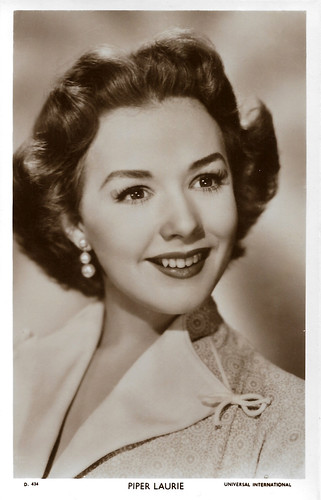 Bathing in milk and eating flower petals for her luminous skin

Piper Laurie was born Rosetta Jacobs in 1932, in Detroit, Michigan. She was the younger daughter of Charlotte Sadie (née Alperin) and Alfred Jacobs, a furniture dealer.

In 1938, the family moved to Los Angeles, where she attended a Hebrew school. For much of her early childhood, her parents placed Laurie and her older sister in a children's home, which they both despised. To combat her shyness, her parents provided her with weekly elocution lessons.

Piper studied acting with Benno and Betomi Schnider for three years. This eventually led to minor roles at nearby Universal Studios. In 1949, Rosetta Jacobs signed a long term contract with Universal Studios, and changed her screen name to Piper Laurie, which she has used since then.

At Universal, she met other soon-to-be familiar actors Julie Adams, Tony Curtis and Rock Hudson. Her breakout role was in the comedy Louisa (Alexander Hall, 1950), with Ronald Reagan, whom she dated a few times before his marriage to Nancy Davis. In her 2011 autobiography 'Learning to Live Out Loud', she claimed that she lost her virginity to him.

Several other roles followed: Francis Goes to the Races (Arthur Lubin, 1951) with Donald O'Connor, the Swashbuckler The Prince Who Was a Thief (Rudolph Mate, 1951) with Tony Curtis in his first starring role, and the comedy Has Anybody Seen My Gal? (Douglas Sirk, 1952) with Rock Hudson.

To enhance her image, Universal Studios told gossip columnists that Laurie bathed in milk and ate flower petals to protect her luminous skin. Other films were the adventures Son of Ali Baba (Kurt Neumann, 1952) again opposite Tony Curtis, and The Golden Blade (Nathan Juran, 1953) again co-starring Rock Hudson. She also co-starred with Rory Calhoun in the Western Dawn at Socorro (George Sherman, 1954), and the musical Ain't Misbehavin' (Edward Buzzell, 1955).

Discouraged by the lack of serious film roles, she moved to New York to study acting and to seek work on the stage and in television. She appeared on TV in Twelfth Night, produced by Hallmark Hall of Fame, in Days of Wine and Roses (John Frankenheimer, 1958) with Cliff Robertson, presented by Playhouse 90 (in the film version, their roles were taken over by Jack Lemmon and Lee Remick), and opposite Martin Balsam in Winterset (George Schaefer, 1959), also presented by Playhouse 90. 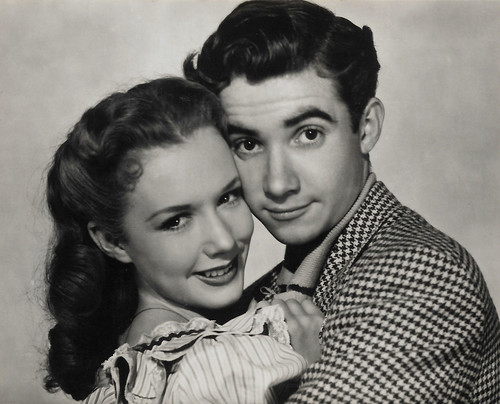 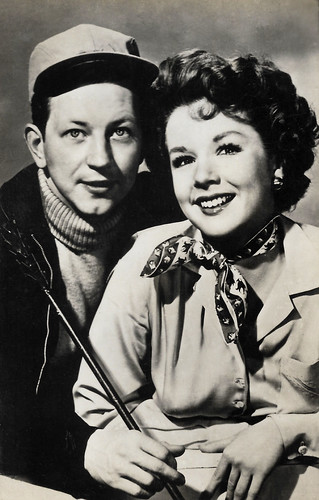 Piper Laurie was again lured to Hollywood by the offer to co-star with Paul Newman in The Hustler (Robert Rossen, 1961). She played Newman's girlfriend, Sarah Packard, and for her performance she received an Academy Award nomination for Best Actress. The Hustler was a major critical and popular success, gaining a reputation as a modern classic.

However, substantial film roles did not come her way, so Laurie and her husband moved to New York. In 1964, she appeared in two TV medical dramas — as Alicia Carter in The Eleventh Hour episode 'My Door Is Locked and Bolted', and as Alice Marin in the Breaking Point episode 'The Summer House'.

In 1965, she starred in a Broadway revival of Tennessee Williams' 'The Glass Menagerie', opposite Maureen Stapleton, Pat Hingle, and George Grizzard. She devoted her energies to the Civil Rights movement and to the Vietnam War, feeling acting was less important.

Laurie did not appear in another feature film until she accepted the role of Margaret White in the supernatural horror film Carrie (Brian De Palma, 1976). Her co-star, Sissy Spacek, praised her acting skill: "She is a remarkable actress. She never does what you expect her to do — she always surprises you with her approach to a scene."

Laurie received an Oscar nomination for Best Supporting Actress, and the commercial success of the film relaunched her career. She appeared in the horror dramas Ruby (Curtis Harrington, 1977) and as Mary Horton in the Australian romance Tim (Michael Pate, 1979) opposite Mel Gibson.

After her 1981 divorce, Laurie relocated to California. She received a third Oscar nomination for her portrayal of Mrs. Norman in Children of a Lesser God (Randa Haines, 1986). That same year, she was awarded an Emmy for her performance in the TV film Promise (Glenn Jordan, 1986), co-starring James Garner and James Woods. 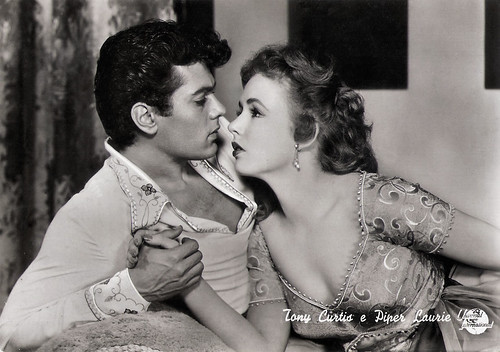 Italian postcard by Bromofoto, Milano, no. 400. Photo: Universal International. Tony Curtis and Piper Laurie in The Prince Who Was A Thief (Rudolph Maté, 1952). 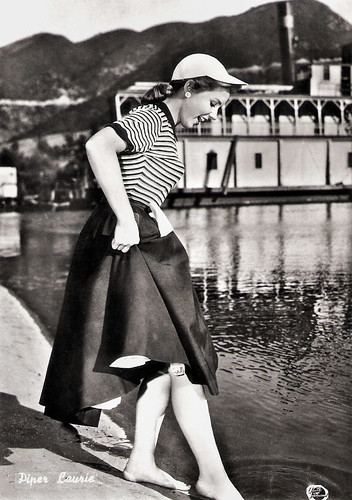 On stage, she had a featured role in the Off-Broadway production of 'The Destiny of Me' in 1992, and later returned to Broadway for Lincoln Center's acclaimed 2002 revival of Paul Osborn's 'Morning's at Seven', with Julie Hagerty and Estelle Parsons.

On television, she played George Clooney's character's mother on ER (1995). Then, she appeared with Patty Duke in the TV film A Christmas Memory (Glenn Jordan, 1997) based on the story by Truman Capote, and in the Sci-Fi thriller The Faculty (Robert Rodriguez, 1998) with Josh Hartnett and Elijah Wood.

She returned to the big screen for independent films, such as Eulogy (Michael Clancy, 2004) and The Dead Girl (Karen Moncrieff, 2006), opposite Toni Collette.

Piper Laurie was married once, to New York Herald Tribune entertainment writer Joe Morgenstern. They met shortly after the release of The Hustler in 1961 when Morgenstern interviewed her during the film's promotion. They soon began dating, and nine months after the interview, they were married in 1962. In 1971, they had a daughter, Anne Grace Morgenstern.

In 1982, the couple divorced, after which she relocated to the Hollywood area and continued working in films and television. Laurie won an Emmy Award for her role in Promise (Glenn Jordan, 1986). In total, she received twelve Emmy nominations, including one for playing Magda Goebbels, wife of Joseph Goebbels, in The Bunker (George Schaefer, 1981), opposite Anthony Hopkins as Hitler, one for her role in the miniseries, The Thorn Birds (Daryl Duke, 1983), two nominations for her work in Twin Peaks, as Catherine Martell, and a nomination for her guest appearance on Frasier.

She has been nominated for an Academy Award for her performances in three films. Most recently, she appeared in the films Snapshots (Melanie Mayron, 2018) and White Boy Rick (Yann Demange, 2018), starring Matthew McConaughey. 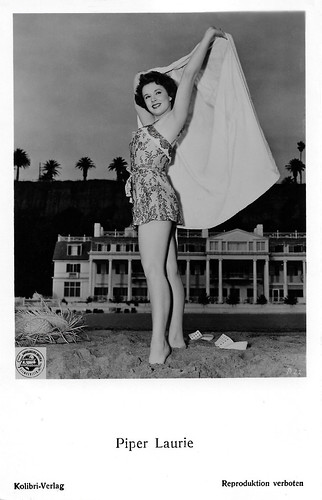 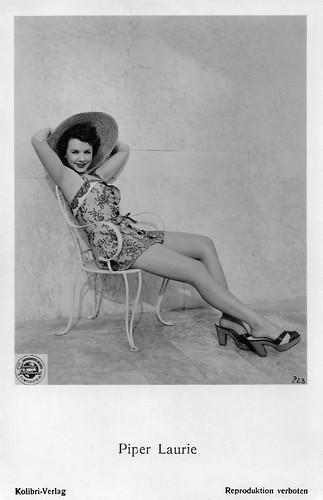 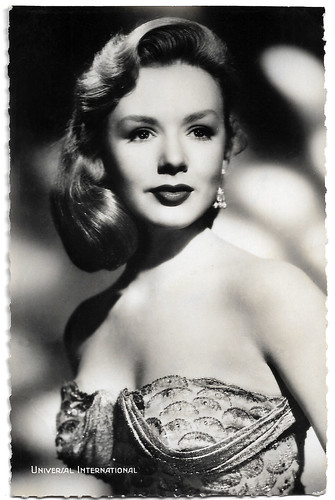