Ida Lupino (1918-1995) was an English-American actress and singer, who became a pioneering director and producer—the only woman working within the 1950s Hollywood studio system to do so. With her independent production company, she co-wrote and co-produced several of her own social-message films, and was the first woman to direct a Film Noir, The Hitch-Hiker (1953). In her 48-year career, she acted in 59 films and directed 8, mostly in the United States, where she became a citizen in 1948. The majority of her later career as an actress, writer, and director was in television, where she directed more than 100 episodes of productions ranging across Westerns, supernatural tales, situation comedies, murder mysteries, and gangster stories. 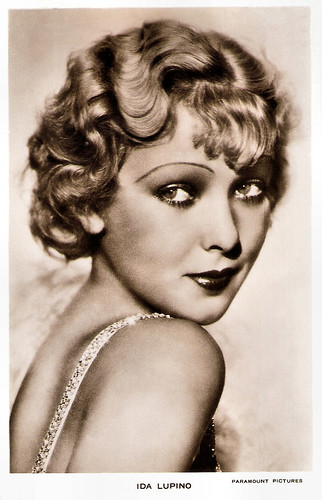 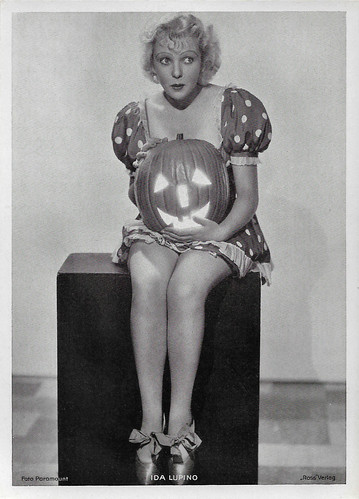 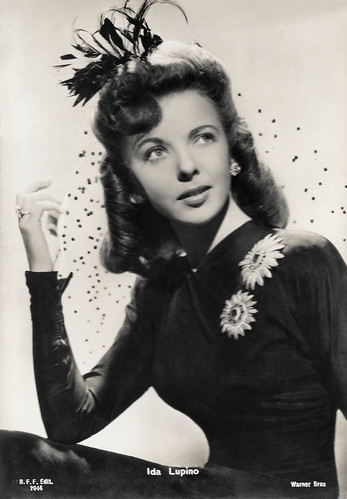 Ida Lupino was born in 1918 in London to a show business family. Her parents were actress Connie O'Shea (also known as Connie Emerald) and music hall entertainer Stanley Lupino, a member of the theatrical Lupino family, which also included Lupino Lane, a popular song-and-dance man.

Her father encouraged Ida to perform at an early age, and built a backyard theatre for her and her sister Rita, who also became an actress and dancer. She wanted to be a writer, but in order to please her father, Lupino enrolled in the Royal Academy of Dramatic Art.

Lupino made her first film appearance in a minor role in The Love Race (Lupino Lane, Pat Morton, 1931), directed by her cousin. According to several sources including >Wikipedia, her mother then brought the 14-years-old Ida with her to an audition and Ida got the part her mother wanted. The picture was Her First Affair (Allan Dwan, 1932), and she played a headstrong young girl, who falls completely for a writer of trashy novels.

However, Marlene Pilaete writes us: "I have the thoroughly researched biography of Ida Lupino written by William Donati. Following him, the story of 'the daughter getting the part her mother wanted' is not true. It seems that Allan Dwan simply saw Ida Lupino in the play 'Heartbreak House' at the Royal Academy and that he asked her to do a screen-test for Her First Affair. That’s how he choose her. I find this story more believable. The scene of Connie Emerald, who was 40 years old in 1932, going to an audition in order to play a teenage girl seems a bit ludicrous to me."

Ida Lupino played leading roles in five British films in 1933 at Warner Bros.' Teddington studios and for Julius Hagen at Twickenham, including in The Ghost Camera (Bernard Vorhaus, 1933) with John Mills, and I Lived with You (Maurice Elvey, 1933) with Ivor Novello.

Dubbed "the English Jean Harlow", the bleached blonde came to Hollywood in 1934 and played small and insignificant parts. Peter Ibbetson (Henry Hathaway, 1935) starring Gary Cooper, was one of her few noteworthy films and it was not until The Light That Failed (William A. Wellman, 1939) that she began to be taken seriously as a dramatic actress.

Mark Hellinger, associate producer at Warner Bros., was impressed by Lupino's performance in The Light That Failed, and hired her for the femme-fatale role in They Drive by Night (Raoul Walsh, 1940), opposite George Raft, Ann Sheridan and Humphrey Bogart.

Her parts improved further during the 1940s. In most of her films, she was cast as the hard, but sympathetic woman from the wrong side of the tracks. In The Sea Wolf (Michael Curtiz, 1941) opposite Edward G. Robinson, and High Sierra (Raoul Walsh, 1941) opposite Humphrey Bogart, she played the part magnificently. Tony Fontana at IMDb: "It has been said that no one could do hard-luck dames the way Lupino could do them. She played tough, knowing characters who held their own against some of the biggest leading men of the day". 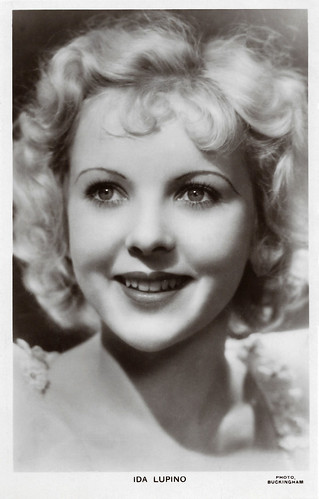 British postcard in the Picturegoer Series, London, no. 786. Photo: Buckingham. 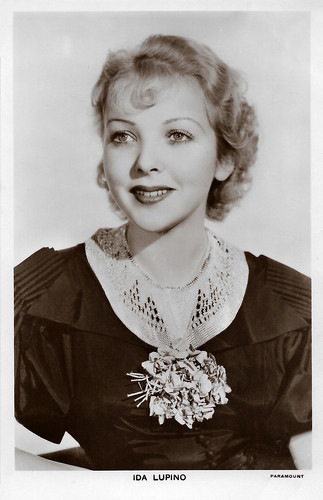 British postcard in the Picturegoer Series, London, no. 786b. Photo: Paramount. 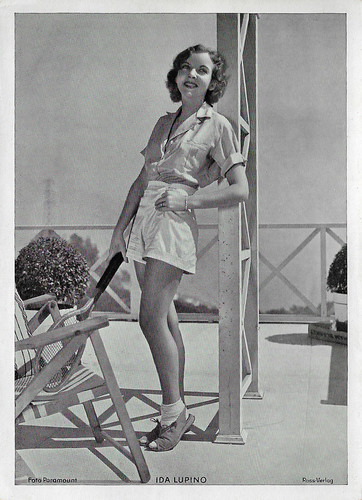 Ida Lupino's performance in The Hard Way (Vincent Sherman, 1943) won the New York Film Critics Circle Award for Best Actress. She made a handful of other films during the 1940s playing different characters ranging from Pillow to Post (Vincent Sherman, 1945), where she played a travelling saleswoman to the tough nightclub singer in The Man I Love (Raoul Walsh, 1947) with Robert Alda.

Although in demand throughout the 1940s, she never became a major star, but was critically lauded for her tough, direct acting style. Good roles for women were hard to get. She left Warner Brothers in 1947 and became a freelance actress. She appeared for 20th Century Fox as a nightclub singer in the Film Noir Road House (Jean Negulesco, 1948), performing her musical numbers in the film.

When better roles did not materialise, Ida stepped behind the camera as a director, writer and producer. She and her husband Collier Young formed an independent company, The Filmakers [sic], to produce, direct, and write low-budget, issue-oriented films.

Her first directing job came when director Elmer Clifton fell ill on Not Wanted (1949), with Sally Forrest as an unwed mother. Lupino co-produced and co-wrote the film, and also stepped in to finish the film. Tony Fontana: "Ida had joked that as an actress, she was the poor man's Bette Davis. Now, she said that as a director, she became the poor man's Don Siegel. The films that she wrote, or directed, or appeared in during the fifties were mostly inexpensive melodramas."

Never Fear (Ida Lupino, 1949) with Sally Forrest and Keefe Brasselle, was her first director's credit. Wikipedia: "She became a wily low-budget filmmaker, reusing sets from other studio productions and talking her physician into appearing as a doctor in the delivery scene of Not Wanted. She used what is now called product placement, placing Coke, Cadillac, and other brands in her films. She shot in public places to avoid set-rental costs and planned scenes in pre-production to avoid technical mistakes and retakes."

She starred in On Dangerous Ground (Nicholas Ray, 1951), and may have taken on some of the directing tasks of the film while director Ray was ill. She later turned to Television where she directed episodes in shows such as The Untouchables (1959), The Fugitive (1963) and The Ghost & Mrs. Muir (1968).

From January 1957 to September 1958, Lupino starred with her then-husband Howard Duff in the sitcom Mr. Adams and Eve, in which the duo played husband-and-wife film stars named Howard Adams and Eve Drake, living in Beverly Hills, California.

In the 1970s, she did guest appearances on various television shows, including Columbo (1972-1974), Police Woman (1975) and Charlie's Angels (1977). She also played Steve McQueen's mother in Junior Bonner (Sam Peckinpah, 1972), and appeared in B-films like the Horror film The Devil's Rain (Robert Fuest, 1975) with Ernest Borgnine, and My Boys Are Good Boys (Bethel Buckalew, 1978) opposite Ralph Meeker, which was her final screen appearance.

She was 60, when she retired from the entertainment business. Ida Lupino was married and divorced three times. She married actor Louis Hayward in 1938. They separated in 1944 and divorced in 1945. Her second marriage was to producer Collier Young in 1948. They divorced in 1951. When Lupino filed for divorce in September that year, she was already pregnant from an affair with future husband Howard Duff. The child was born seven months after she filed for divorce from Young. Lupino's third and final marriage was to actor Howard Duff, whom she married on 21 October 1951. Six months later, their daughter Bridget was born in 1952. Lupino and Duff divorced in 1983.

Ida Lupino died from a stroke while undergoing treatment for colon cancer in Los Angeles in 1995, at the age of 77. Her memoirs, 'Ida Lupino: Beyond the Camera', were edited after her death and published by Mary Ann Anderson. 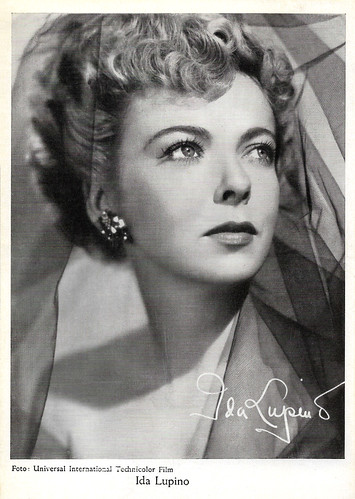 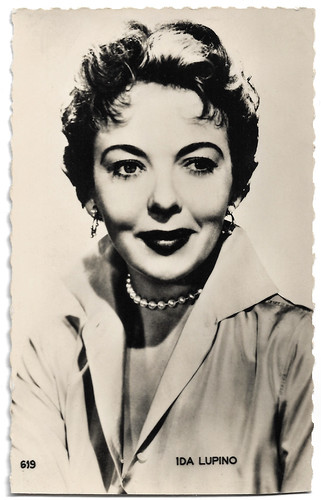 French postcard by Editions P.I., Paris, no. 619. Photo: Warner Bros. The bottom of the card was cut off by a former owner. 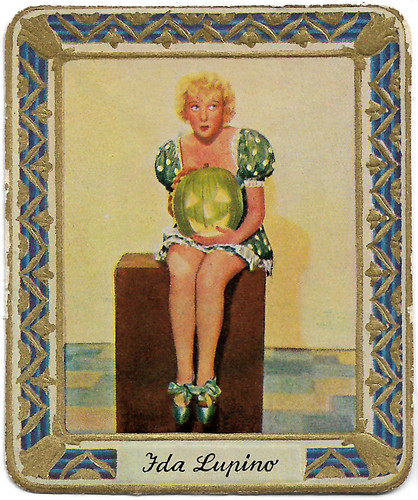