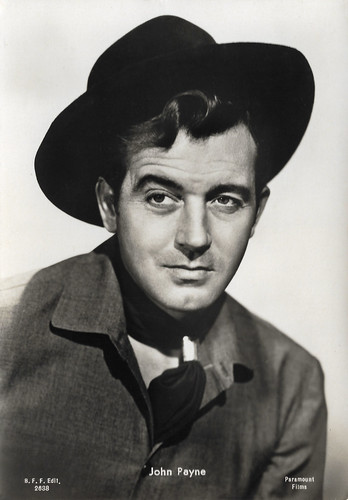 Alexei Petroff, the Savage of the Steppes


John Howard Payne was born in Roanoke, Virginia, in 1912. His parents were Ida Hope (née Schaeffer), a singer, and George Washington Payne, a developer in Roanoke. They lived at Fort Lewis, an antebellum mansion that became a state historic property but was destroyed by fire in the late 1940s.

Payne attended prep school at Mercersburg Academy in Mercersburg, Pennsylvania, and then went to Roanoke College in Salem, Virginia. He then transferred to Columbia University in New York City in the fall of 1930. He studied drama at Columbia and voice at the Juilliard School. To support himself, he took on a variety of odd jobs, including wrestling as 'Alexei Petroff, the Savage of the Steppes' and boxing as 'Tiger Jack Payne'.

In 1932, while visiting his family in Roanoke, Virginia, he agreed to take a small role in a community theatre production of 'The Man Who Came to Dinner', at the Academy of Music on Salem Avenue. In 1934, a talent scout for the Shubert theaters spotted Payne and gave him a job as a stock player. He appeared in road company productions of 'Rose Marie' and 'The Student Prince'. Payne toured with several Shubert Brothers shows, and frequently sang on New York City-based radio programs.

On Broadway, he appeared in the revue 'At Home Abroad' (1935–1936) alongside Eleanor Powell and Beatrice Lillie. He understudied for Reginald Gardiner and took over one night. He was seen by Fred Kohlmar of Sam Goldwyn's company and was offered a film contract. In 1936, he left New York for Hollywood. He tested for a role in Goldwyn's Come and Get It but lost out to Frank Shields.

His first role in Goldwyn's Dodsworth (William Wyler, 1936) presented him as an affable, handsome character actor. He had the male lead opposite Mae Clarke in Hats Off (Boris Petroff, 1936), an independent B-film. Payne was third billed in Fair Warning (Norman Foster, 1937), a B-film at Fox. He was the lead in a low-budget film Love on Toast (Ewald André Dupont, 1937). Payne was down the cast list for Paramount's College Swing (Raoul Walsh, 1938), starring George Burns and Gracie Allen.

He then signed a contract with Warner Bros, where he had a notable break replacing Dick Powell, who turned down the role, in Garden of the Moon (Busby Berkeley, 1938). Warners used Payne as a sort of "back up Dick Powell". He was in Kid Nightingale (George Amy, 1939) and Wings of the Navy (Lloyd Bacon, 1939). Payne supported Ann Sheridan in Indianapolis Speedway (Lloyd Bacon, 1939) and starred in a short The Royal Rodeo (George Amy, 1939) and in the B-films King of the Lumberjacks (William Clemens, 1940) and Tear Gas Squad (Terry O. Morse, 1940). During this time he returned to Broadway to appear in 'Abe Lincoln in Illinois' (1938–1939). Payne was unhappy with his Warner Bros roles and asked for a release. 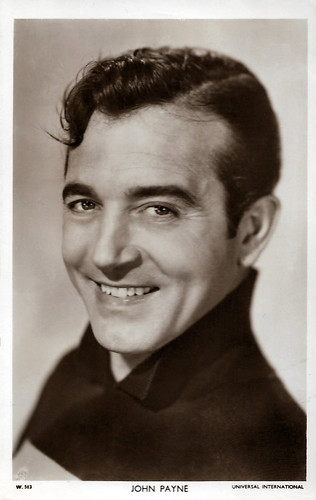 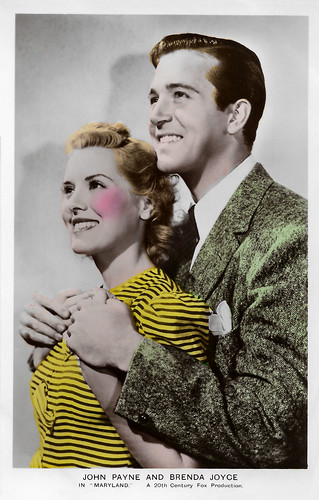 Fox gave him the chance to do drama in Remember the Day (Henry King, 1941), romancing Claudette Colbert. He was meant to be in Song of the Islands (Walter Lang, 1942) with Grable but when George Raft couldn't get released from Warners Bros to play a marine in To the Shores of Tripoli (H. Bruce Humberstone, 1942), Payne stepped in. The film, co-starring Maureen O'Hara and Randolph Scott, was hugely popular.

So too was Footlight Serenade (Gregory Ratoff, 1942) with Betty Grable and Victor Mature, Springtime in the Rockies (Irving Cummings, 1942) with Grable, Iceland (H. Bruce Humberstone, 1943) with Sonja Henie, and especially Hello, Frisco, Hello (H. Bruce Humberstone, 1943) with Alice Faye. During World War II, Payne served as a flight instructor in the United States Army Air Corps. He got his honourable discharge in September 1944.

He returned to work at Fox, who put him in The Dolly Sisters (Irving Cummings, 1945) with Grable and June Haver, playing Harry Fox. It was one of Payne's most successful films. Less popular was Wake Up and Dream (Lloyd Bacon, 1946) with Haver. Payne was teamed with Maureen O'Hara in Sentimental Journey (Walter Lang, 1946), a big hit. He was third-billed in The Razor's Edge (Edmund Goulding, 1946) underneath Tyrone Power and Gene Tierney, Fox's most prestigious film of 1946.

Payne's most familiar role may be his final film for Fox, that of attorney Fred Gailey in the classic holiday favourite Miracle on 34th Street (George Seaton, 1947) with Natalie Wood, Maureen O'Hara, and Edmund Gwenn. It was another box office success. He was meant to make another with O'Hara, Sitting Pretty (Walter Lang, 1948). However, in October 1947 he got his release from the studio, despite the contract having another four years to run, which would have brought him $670,000. Payne claimed he was dissatisfied with the roles being offered him. Payne later said he had asked for his release every week for eight months before he got it. Film historian Jeanine Basinger later wrote that "Fox thought of him [Payne] as a secondary Tyrone Power. They didn't know how to use him." 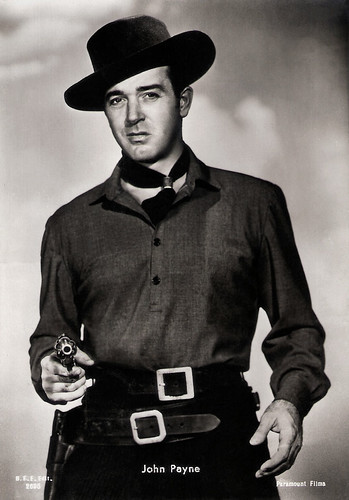 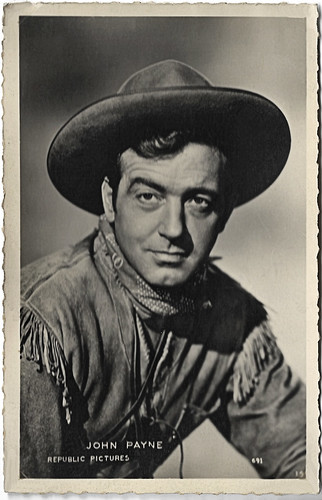 
After leaving Fox, John Payne attempted to change his image and began playing tough-guy roles in Film Noirs. He did two Film Noirs at Universal, Larceny (George Sherman, 1948), where he played the lead role and The Saxon Charm (Claude Binyon, 1948) with Robert Montgomery and Susan Hayward. He had the lead in The Crooked Way (Robert Florey, 1949) for United Artists.

In 1952 he said he got four times the fan mail he did at Fox. "I make fewer pictures now but I make the kind I want to make." For Edward Small, he starred in Kansas City Confidential (Phil Karlson, 1952) with Coleen Gray, a Film Noir; Payne owned 25% of the film. He later worked with Small on the pirate film Raiders of the Seven Seas (Sidney Salkow, 1953), and the Film Noir 99 River Street (Phil Karlson, 1953). 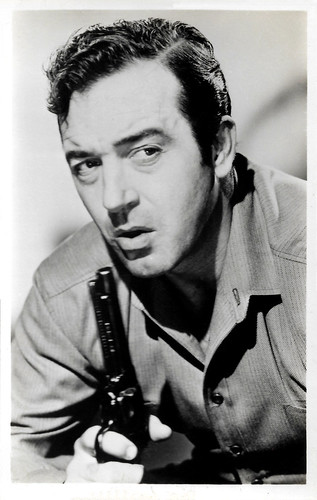 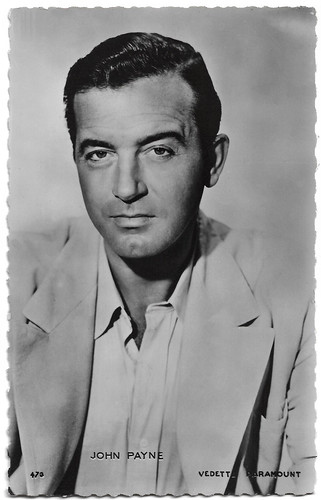 
John Payne then did Rebel in Town (Alfred L. Werker, 1956) and Hidden Fear (André De Toth, 1957) for United Artists. He made one more Pine Thomas, Bailout at 43,000 (Francis D. Lyon, 1957). In 1957 he optioned the rights for 'For the Life of Me, the memoir of a newspaper editor', but it was not made. Payne also starred as Vint Bonner, an educated, commonsense gunfighter, in The Restless Gun which aired on NBC from 1957 to 1959, prior to Dale Robertson's Western series Tales of Wells Fargo. Dan Blocker, James Coburn, and Don Grady made their first substantive acting forays with Payne on The Restless Gun.

In March 1961, John Payne suffered extensive, life-threatening injuries when struck by a car in New York City. His recovery took two years. In his later roles, facial scars from the accident can be detected in close-ups; he chose not to have them removed.

Payne directed one of his last films, They Ran for Their Lives (John Payne, 1968), and again teamed up with Alice Faye in a 1974 revival of the musical 'Good News'. He also starred in the Gunsmoke episode of Gentry's Law (Vincent McEveety, 1970). His final role was on TV in the Columbo episode Forgotten Lady (Harvey Hart, 1975), co-starring with Peter Falk and Janet Leigh.

Later in life Payne, like former Daniel Boone-Davy Crockett series star Fess Parker, became wealthy through real estate investments in southern California. Payne was married to actress Anne Shirley from 1937 to 1942; they had a daughter, Julie Anne Payne. After their divorce, Payne married actress Gloria DeHaven in 1944; the union produced two children, Kathleen Hope Payne (1945) and Thomas John Payne, before ending in divorce in 1950. During the filming of Kansas City Confidential (1952) he had a romance with recently divorced co-star Coleen Gray that continued well past filming. Payne then married Alexandra Beryl 'Sandy' Crowell Curtis in 1953 and remained with her until his death.

John Payne was the father-in-law of writer-director Robert Towne, who was married to his oldest daughter Julie until their divorce in 1982. John Payne died in Malibu, California, of congestive heart failure in 1989, aged 77. His ashes were scattered into the Pacific Ocean. He has two stars on the Hollywood Walk of Fame, in motion pictures and television. 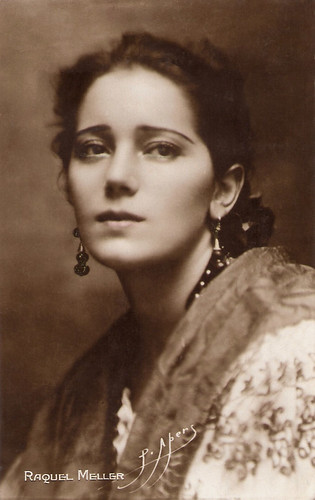