On 6 January 2022, Sidney Poitier (1927) passed away in the Bahamas. The Bahamian-American actor, film director, activist, and ambassador, was one of the last surviving stars from the Golden Age of Hollywood. In 1964, Poitier won the Oscar for Best Actor becoming the first black male and Bahamian actor to win that award. In 1955, he had his breakthrough as a high school student in Blackboard Jungle (1955). In 1958, Poitier starred with Tony Curtis as chained-together escaped convicts in The Defiant Ones, for which he received a nomination for Best Actor - the first for a black actor. In 1964, he won the Academy Award and the Golden Globe for Lilies of the Field (1963). He continued to break ground in such films as Guess Who's Coming to Dinner (1967) and In the Heat of the Night (1967). Poitier was 94. 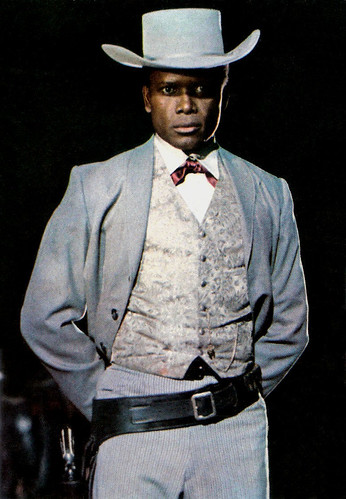 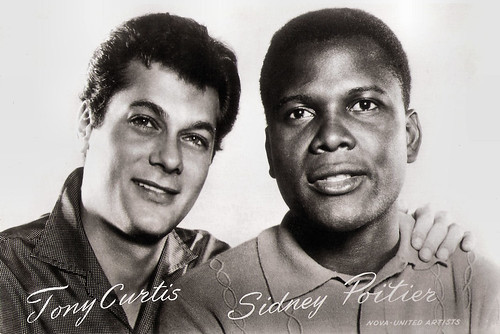 
Sidney L. Poitier was born in 1927 in Miami, but he grew up on Cat Island, one of the Bahamas, then still a British colony. Poitier was born, two months prematurely, in Miami while his parents were visiting Miami to sell tomatoes and other produce. This automatically granted him American citizenship. His parents, Evelyn (née Outten) and Reginald James Poitier, were poor farmers. Jim Beaver at IMDb: "He had little formal education and at the age of 15 was sent to Miami to live with his brother, in order to forestall a growing tendency toward delinquency. In the U.S., he experienced the racial chasm that divides the country, a great shock to a boy coming from a society with a majority of African descent."

At 18, he went to New York, did menial jobs, and slept in a bus terminal toilet. A brief stint in the Army as a worker at a veteran's hospital was followed by more menial jobs in Harlem. He auditioned for the American Negro Theatre but was initially rejected because of his heavy Bahamian accent. After six months of speech lessons, he was accepted after all. On his second attempt at the theatre in 1946, he was noticed and given a leading role in the Broadway production 'Lysistrata' by Aristophanes, for which, though it ran a failing four days, he received an invitation to understudy for 'Anna Lucasta'.

In 1950, he made his film debut in the Film Noir No Way Out (Joseph L. Mankiewicz, 1950), as a black doctor who has to treat a racist, played by Richard Widmark. No Way Out was controversial in its graphic representation of racial violence in what director Mankiewicz termed “the absolute blood and guts of Negro hating.” More, bigger roles followed. Poitier's big breakthrough followed with his role as a rebellious student in The Blackboard Jungle (Richard Brooks, 1955), a social drama film about teachers in an inter-racial inner-city school. The film is also remembered for its innovative use of rock and roll in its soundtrack.

In 1958, he received his first Oscar nomination for his role opposite Tony Curtis in The Defiant Ones (Stanley Kramer, 1958) as two chained-together escaped convicts. The film received nine Academy Award nominations. Both actors received a nomination for Best Actor, with Poitier's being the first for a black actor, as well as a nomination for a BAFTA, which Poitier won.

More films followed, including the musical Porgy and Bess (Otto Preminger, 1959) alongside Dorothy Dandridge. and A Raisin in the Sun (Daniel Petrie, 1961) with Ruby Dee. In 1963, he was the first black actor to receive an Academy Award for Best Actor for Lilies of the Field (Ralph Nelson, 1963), playing a handyman helping a group of German-speaking nuns build a chapel. 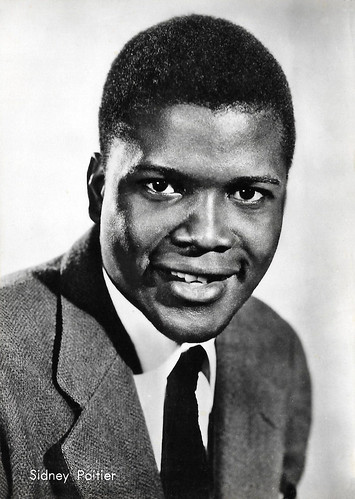 Italian postcard by Bromostampa, Milano, no. 267. 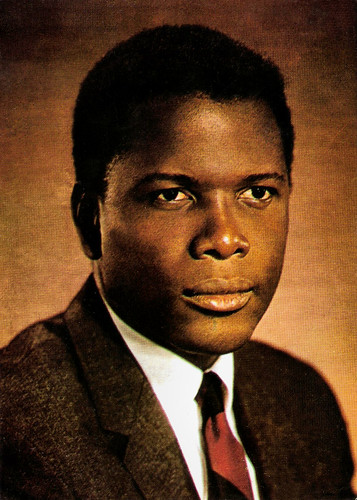 
Sidney Poitier remained active on stage and screen as well as in the burgeoning Civil Rights movement. In 1967, he starred in three very successful films which dealt with issues of race and race relations. The first was the British drama To Sir, With Love (James Clavell, 1967), in which he played a black teacher at a troublesome school in London. Then followed Guess Who's Coming to Dinner (Stanley Kramer, 1967) as the black fiancé of a white woman (Katharine Houghton). The third film, the mystery In the Heat of the Night (Norman Jewison, 1967) became that year's winner of the Academy Award for Best Picture. He played a detective investigating a murder while having to deal with all kinds of prejudice in the southern United States. Poitier was the top box-office star of the year.

In the Heat of the Night featured his most successful character, Virgil Tibbs, a Philadelphia, Pennsylvania detective whose subsequent career was the subject of two sequels: They Call Me MISTER Tibbs! (Gordon Douglas, 1970) and The Organization (Don Medford, 1971). In 1972, Poitier made his directorial debut in Buck and the Preacher. He went on to direct other films such as Uptown Saturday Night (1974), Let's Do It Again (1975), and Piece of the Action (1977). In all these films, he himself played one of the leading roles.

In 1980, he directed the hit comedy Stir Crazy, starring Gene Wilder and Richard Pryor. After directing two more films, Hanky Panky (1982) and Fast Forward (1985), he appeared again as an actor in 1988, in the thriller Shoot to Kill (Roger Spottiswoode, 1988) with Tom Berenger, and the spy drama Little Nikita (Richard Benjamin, 1988) with River Phoenix.

In 1990, he directed Ghost Dad with Bill Cosby, which flopped. That same year, he played the role of Judge Thurgood Marshall in the television film Separate But Equal. In the 1990s, he starred in Sneakers (Phil Alden Robinson, 1992) and The Jackal (Michael Caton-Jones, 1997) with Bruce Willis and Richard Gere. His final screen role was in the TV Movie The Last Brickmaker in America (Gregg Champion, 2001).

Poitier had been married twice, the first time to Juanita Hardy from 1950 to 1965, the second time to actress Joanna Shimkus, from 1976 to his death. He had four children from his first marriage, and two from his second.

In 1974, Sidney Poitier was made a Knight Commander of the Order of the British Empire. As of April 1997, he was the Bahamas' Ambassador to Japan. In 2002, Poitier received the Academy Honorary Award for his contributions to the film industry. In 2009, President Obama awarded him the Presidential Medal of Freedom, the highest award given to citizens on behalf of the United States. 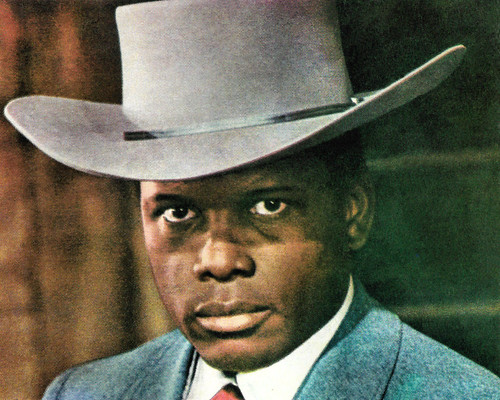 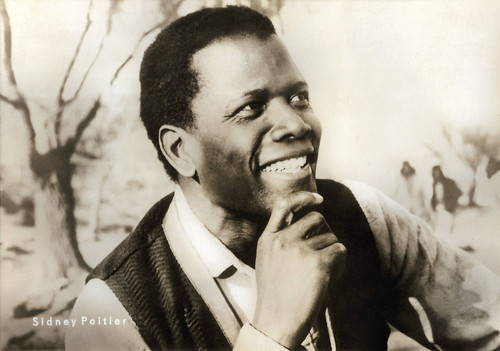 East-German postcard by Progress Film-Verleih, Berlin, no. 13/74. Sidney Poitier in Buck and the Preacher (1971).