English actor Basil Rathbone (1892-1967) appeared both in British and Hollywood films. He rose to prominence in the United Kingdom as a Shakespearean stage actor and went on to appear in more than 70 films. He played suave villains in such classic Swashbucklers as Captain Blood (1935) and The Adventures of Robin Hood (1938). He also became well-known for his roles in Horror films and for playing Sherlock Holmes in a total of 14 detective films between 1939 and 1946. Rathbone was a Tony Award winner. and was nominated for an Oscar twice. 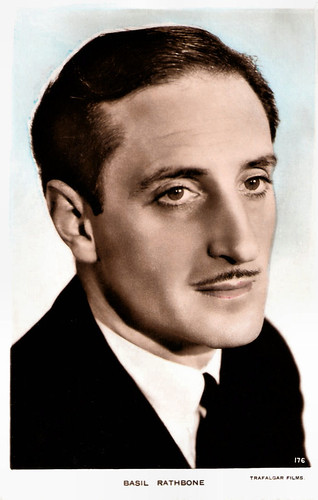 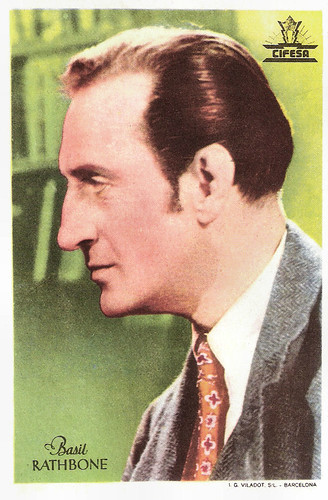 Hoping he would forget about acting


Philip St. John Basil Rathbone was born in Johannesburg, South Africa, in 1892 to British parents. His mother Anna Babera George was a violinist, and his father Edgar Philip Rathbone a mining engineer. Three years later his family was forced to flee the country because his father was accused by the Boers of being a British spy at a time when Dutch-British conflicts were leading to the Boer War.

The Rathbones escaped to England, where Basil and his two younger siblings, Beatrice and John, were raised. From 1906 to 1910 Rathbone attended Repton School, where he was more interested in sports - especially fencing, at which he excelled - than studies, but where he also discovered his interest in the theatre.

After graduation, he planned to pursue acting as a profession, but his father disapproved and suggested that his son try working in the business for a year, hoping he would forget about acting. Rathbone accepted his father's suggestion and worked as a clerk for an insurance company - for exactly one year.

Then he contacted his cousin Frank Benson, an actor managing a Shakespearean troupe in Stratford-on-Avon. Rathbone was hired as an actor on the condition that he work his way through the ranks, which he did quite rapidly. Starting in bit parts in 1911, he was playing juvenile leads within two years.

In 1915 his career was interrupted by the First World War. During his military service, as a second lieutenant in the Liverpool Scottish 2nd Battalion, he worked in intelligence and received the Military Cross for bravery. In 1919, released from military service, he returned to Stratford-on-Avon and continued with Shakespeare but after a year moved onto the London stage. The year after that he made his first appearance on Broadway and his cinema debut in the silent film Innocent (Maurice Elvey, 1921). 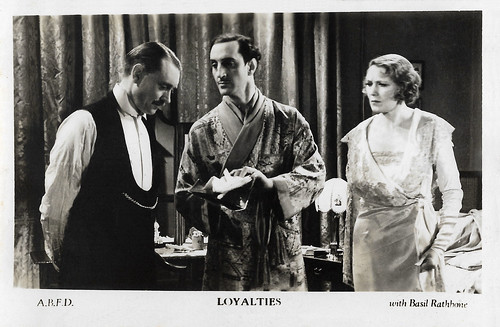 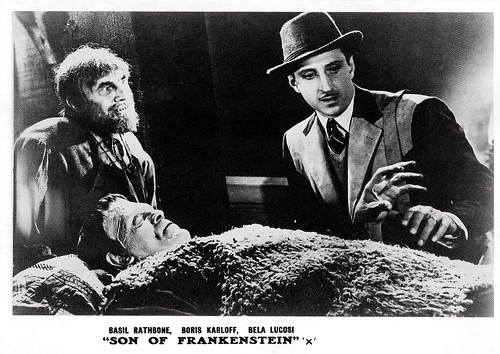 He abandoned his first love for a film career


For the remainder of the decade, Basil Rathbone alternated between the London and New York stages and occasional appearances in films. In 1929 he co-wrote and starred as the title character in a short-running Broadway play called 'Judas'. Soon afterwards he abandoned his first love, the theatre, for a film career.

During the 1920s, his roles had evolved from the romantic lead to the suave lady-killer to the sinister villain (usually wielding a sword), and Hollywood put him to good use during the 1930s in numerous costume romps, including Captain Blood (Michael Curtiz, 1935) starring Errol Flynn, The Personal History, Adventures, Experience, & Observation of David Copperfield the Younger (George Cukor, 1935), and A Tale of Two Cities (Jack Conway, 1935) with Ronald Colman.

Rathbone earned two Oscar nominations for Best Supporting Actor as Tybalt in Romeo and Juliet (George Cukor, 1936) and as King Louis XI in If I Were King (Frank Lloyd, 1938). 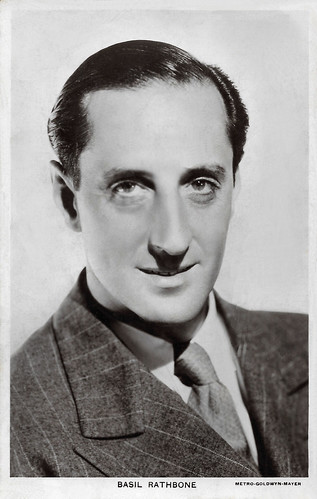 British postcard in the Picturegoer Series, London, no. 472a. Photo: Metro-Goldwyn-Mayer.

His best-known and most popular character


However, it was in 1939 that Basil Rathbone played his best-known and most popular character, Sherlock Holmes, with Nigel Bruce as Dr. Watson, first in The Hound of the Baskervilles (Sidney Lanfield, 1939) and then in The Adventures of Sherlock Holmes (Alfred L. Werker, 1939).

These were followed by 12 more films and numerous radio broadcasts over the next seven years. Feeling that his identification with the character was killing his film career, Rathbone went back to New York and the stage in 1946.

The next year he won a Tony Award for his portrayal of Dr. Sloper in the Broadway play 'The Heiress', but afterwards, he found little rewarding stage work. Nevertheless, during the last two decades of his life, Rathbone was a very busy actor, appearing on numerous television shows, primarily drama, variety and game shows.

He played in occasional films, such as Casanova's Big Night (Norman Z. McLeod, 1954), The Court Jester (Melvin Frank, Norman Panama,1955) with Danny Kaye, Tales of Terror (Roger Corman, 1962) and The Comedy of Terrors (Jacques Tourneur, 1963). He also appeared in his own one-man show, 'An Evening with Basil Rathbone', with which he toured the U.S.

In 1967, Basil Rathbone died of a heart attack in New York City at the age of 75. He was married twice. His first wife was Ethel Marion Foreman (1914-1926). After their divorce, he married actress, playwright and screenwriter Ouida Bergère in 1926. They adopted a child, Cynthia Rathbone. He also had a son with Ethel Marion Foreman: John Rodion. Rathbone remained married to Ouida for over 41 years until his death, and the marriage was considered one of the most exemplary in Hollywood. The couple hosted glamorous parties at their estate in California, which had also once been occupied by Jack Dempsey. 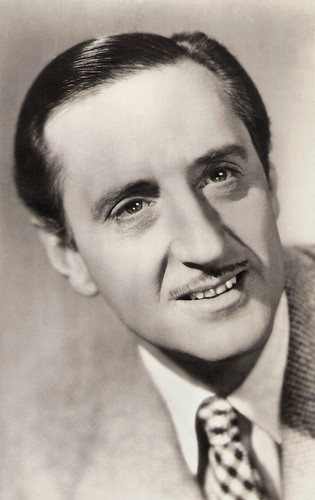 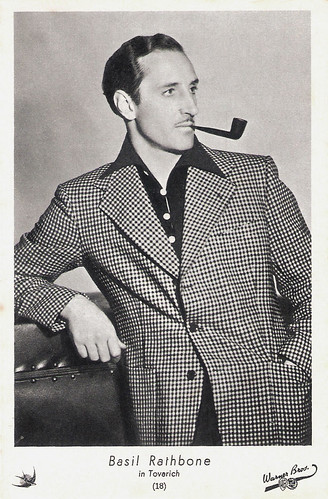 A fine actor and one of the first "British' actors I was introduced to as a child.