German singer/actress Charlotte Ander (1902 - 1969) was a star in the silent era before making the transition to sound. The Nazis broke her successful career, because she was not of 'pure' blood. Heaven on Earth
Charlotte Ander was born Charlotte Andersch in Berlin in 1902. She was the daughter of German stage/film couple Rudolf Andersch and Ida Perry. Charlotte was trained at the Berliner Staatstheater. From 1920 on she appeared on stage as well as in films. Her film career started with Die letzte Stunde/The Last Hour (1920, Dimitri Buchowetzki) with Reinhold Schünzel. One of her next films was Danton/All for a Woman (1921, Dimitri Buchowetzki) in which she acted at the side of Emil Jannings, Werner Krauss and Conrad Veidt. In Tragödie der Liebe/Love’Tragedy (1923, Joe May) she appeared again with Emil Jannings, and also with the up-and-coming Marlene Dietrich. The following years she featured in silent films like Ein Sommernachtstraum/A Midsummer Night's Dream (1925, Hans Neumann) with Hans Albers, Der Himmel auf Erden/Heaven on Earth (1927, Alfred Schirokauer, Reinhold Schünzel) and Die Nacht gehört uns/Night Is Ours (1929, Carl Froelich, Henry Roussel) before she started to conquer the sound film. 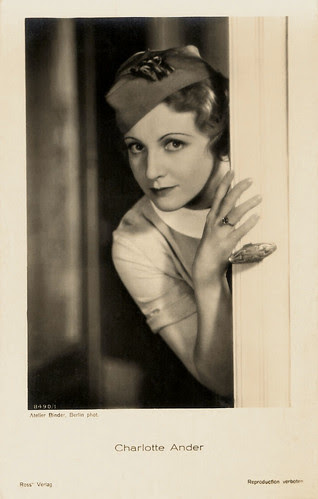 Abrupt Career Interruption
Charlotte Ander continued to feature successfully on screen in the early 1930's, like in Nur Du/Only You (1930, Hermann Feiner, Willi Wolff), Elisabeth von Österreich/Elisabeth of Austria (1931, Adolf Trotz) with Lil Dagover, and Gräfin Mariza/Countess Maritza (1932, Richard Oswald) with Dorothea Wieck. She celebrated her greatest success with the role of the record shop assistant Nina in Ein Lied geht um die Welt/A Song Goes Around the World (1933, Richard Oswald) in which she starred with the popular singer Joseph Schmidt, and with her mother, Ida Perry. In 1933 followed an abrupt interruption in her career. After the Nazis came to power, it became difficult for Charlotte to find work, because she was not reinrassig (of ‘pure’ blood; not an Aryan). She went to England and made at least two films, including Maid Happy (1933, Mansfield Markham) and My Song Goes Round the World (1934, Richard Oswald), again with Joseph Schmidt. But soon she found roles as hard, or harder, to find in England than they had been in Germany. Despite the difficult conditions for her in Nazi Germany, Charlotte Ander returned. 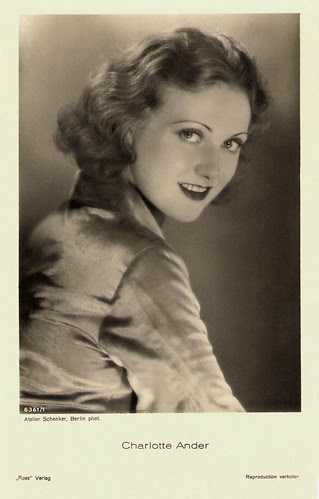 The Plot to Assassinate Hitler
Back in Germany Charlotte Ander could make a living although not often in front of the cameras. Her only two Nazi era films were Wie einst im Mai/Like Once in May (1937, Richard Schneider-Edenkoben) and the comedy Anton, der Letzte/ Anthony the Last (1939, E.W. Emo) with Elfriede Datzig and Hans Moser. Her fortunes were somewhat better on the stage. After the war she continued to work in the theatre, like on the stages of Baden-Baden and Berlin. She returned to the screen in 1950, in the DEFA production Familie Benthin/The Benthin Family (1950, Slatan Dudow, Richard Groschopp, Kurt Maetzig). She played small parts in West-German productions like the comedy Maharadscha wider Willen/Maharadja Against His Will (1950, Ákos Ráthonyi) with Olga Tschechova, Mein Herz darfst du nicht fragen/You May Not Ask For My Heart (1952, Paul Martin), Das tanzende Herz/The Dancing Heart (1953, Wolfgang Liebeneiner), and Die Mücke/The Gnat (1954) with Hilde Krahl. She featured in the TV film Peter Schlemihl (1955, Hans-Waldemar Bublitz). Her last film appearance was in Der 20. Juli/The Plot to Assassinate Hitler (1955, Falk Harnack) with Wolfgang Preiss as Oberst Claus Schenk Graf von Stauffenberg. Charlotte Ander died in 1969 in Berlin. 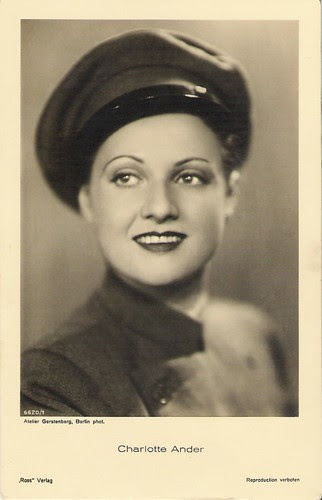