French actor Jacques Dumesnil (1904 - 1998) played mostly secondary roles in more than 50 films. He was often cast as an officer or a crook. 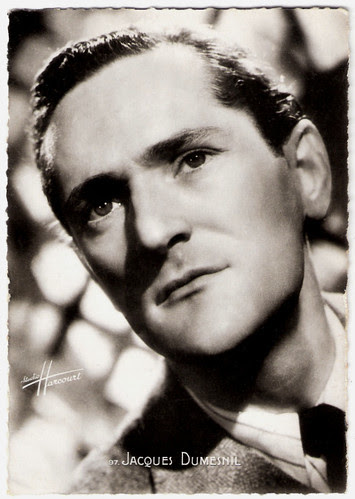 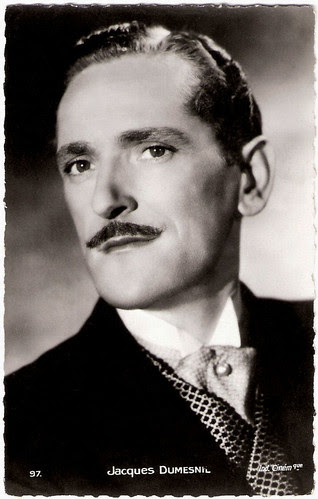 Buster Keaton
Jacques Dumesnil was born as Marie Émile Eugène André Joly in Paris, France in 1904. His film career started in the early 1930’s with parts in melodramas like Le maître de forges/The Ironmaster (1933, Abel Gance, Fernand Rivers) with Gaby Morlay, La belle de nuit/The Beauty of the Night (1934, Louis Valray) and Lucrèce Borgia/Lucrezia Borgia (1935, Abel Gance) starring Edwige Feuillère. He played a gangster in Le Roi des Champs-Élysées/Champ of the Champs Elysees (1934, Max Nosseck). In this curious comedy, silent screen legend Buster Keaton played both an American gangster who leads a chase for the ‘good’ Buster, his look-alike, a hapless Parisian publicist. Keaton speaks French in this film and just before the end the 'Great Stone Face' breaks into an uncharacteristic wide smile. Other 1930’s films with Dumesnil are the romantic drama Retour à l'aube/Return to the Dawn (1938, Henri Decoin) and the in China situated adventure film Les pirates du rail/The Pirates of the Railroad (1938, Christian Jacque) based on a script by Hergé, the creator of Tintin. 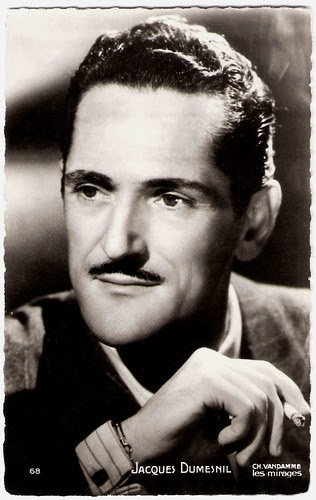 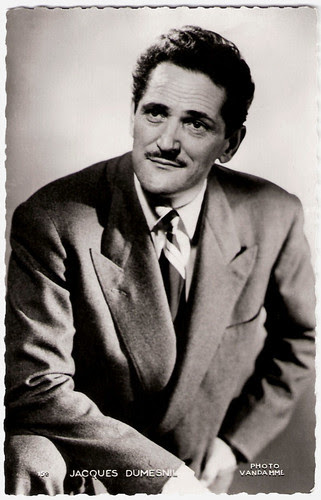 The French Voice of Charlie Chaplin
During the French occupation, Jacques Dumesnil acted in such films as Le mariage de Chiffon/The Marriage of Chiffon (1942, Claude Autant-Lara), but also worked as a production designer for the Fernandel vehicle La bonne étoile/The Good Star (1943, Jean Boyer) and the opera drama La Malibran/Maria Malibran's Story (1944, Sacha Guitry). After the war he played the leads in the comedy Jeux de Femmes/Women's Games (1946, Maurice Cloche) as a carefree young man, living in exquisite sin, who suddenly has to marry. He also starred in La ferme des sept péchés/The Farm of Seven Sins (1949, Jean-Devaivre), a drama set during the Napoleonic era. The latter film won first prize at the Locarno Film Festival, but commercially more successful were the films in which he played secondary roles, like Anna (1951, Alberto Lattuada) starring Silvana Mangano, Ulisse/Ulysses (1954, Mario Camerini) starring Kirk Douglas, and Napoléon (1955, Sascha Guitry) with Daniel Gelin in the title role. Dumesnil gave Charlie Chaplin a French voice in the synchronised versions of Monsieur Verdoux (1947, Charles Chaplin) and A King in New York (1957, Charles Chaplin) and he was also active in the theatre as a member of the Comédie-Francaise. His last film role was a dying mob boss in the excellent thriller Les tontons flingueurs/Grisby or Not Grisby (1963, George Lautner). In later years he only worked for TV and for the Comédie-Francaise. His son, Pierre Dumesnil was a French swimming champion who participated in the Olympic Games of 1952. Jacques Dumesnil died in 1998 in Bron, France.

Hi, I'm putting up some Ross cards on my blog at www.junkshopsnapshots.blogspot.com this weekend and I'm wondering if you have any information on Rolf Randolf. I have the brief article about him on Wikipedia and his filmography but any idea about his private life or how he died would be appreciated.
Regards
John Toohey

Sorry, can't really help you. Randolf was more a director and producer
than a film star and his best known film is Der Bettler vom Kölner Dom
(1927). Besides Wikipedia and ImDb, you can check out Filmportal.de.

And there is a clip of Der Bettler vom Kölner Dom

Ok thanks Bob. He remains a mystery.