Last Thursday, 29 May 2014, Austrian actor Karlheinz Böhm has passed away after a long illness. Böhm, who was sometimes referred to as Carl Boehm or Karl Boehm, played in 45 films. He was the young Emperor Franz Joseph I of Austria in the Sissi trilogy. He and Romy Schneider became the perfect couple of the German cinema of the 1950s. Internationally, he is also known for his role as Mark, the psychopathic protagonist of Michael Powell's terrifying thriller Peeping Tom (1960). 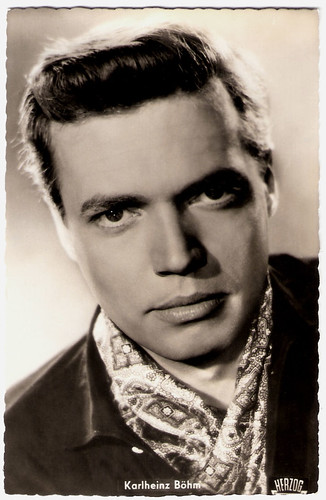 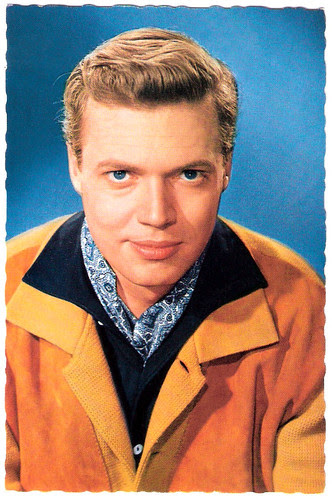 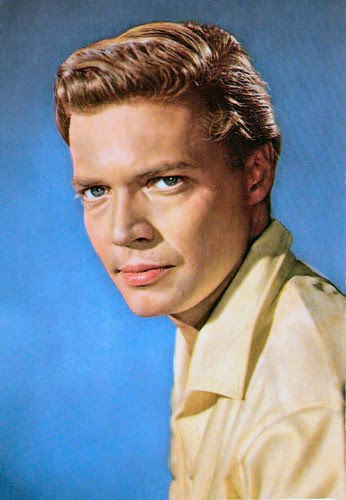 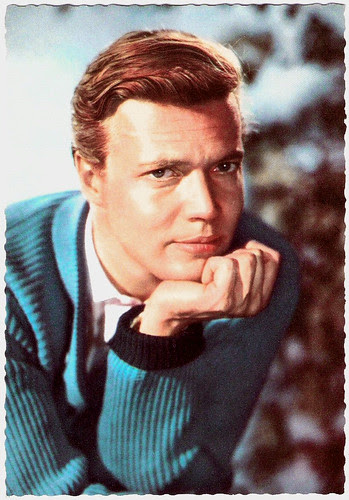 Karlheinz Böhm (sometimes Carl Boehm) was born in Darmstadt, Germany in 1928. His father was the conductor Karl Böhm and his mother the soprano Thea Linhart.

Karlheinz started his career in 1948 as an assistant director of Der Engel mit der Posaune/The Angel with the Trumpet (Karl Hartl, 1948), in which he also played a small part.

Later he attended the actor's training at the Burgtheater and subsequently became a member of the ensemble.

In the following decade, Böhm appeared in more than 30 films. His first success was his role as the elegant young lover of Alraune/Mandrake (Arthur Maria Rabenalt, 1952) starring Hildegard Knef. 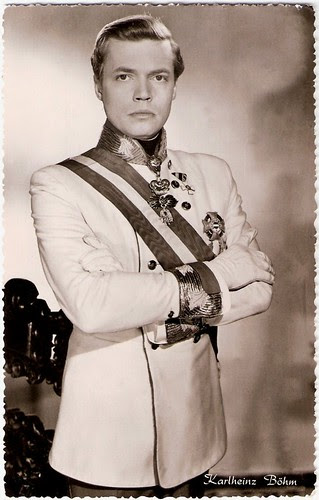 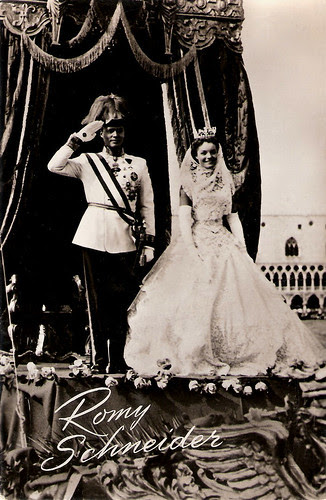 Hugely popular were the three Sissi films. Karlheinz Böhm and Romy Schneider formed the perfect couple of the German film in the 1950s.

They left Böhm with a serious image problem. He attempted a change in international films, but with his first British film he succeeded almost too well. 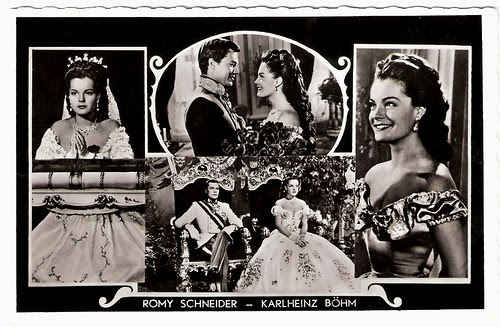 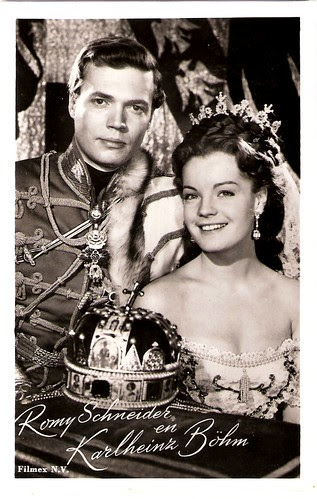 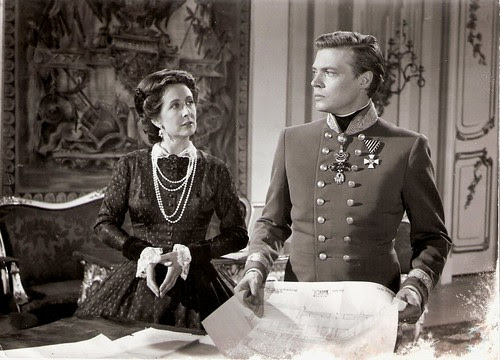 Outside of Europe, Karlheinz Böhm is probably best known for his role as the psychopathic voyeur and serial killer Mark in Peeping Tom (Michael Powell, 1960).

The film received slating reviews by British and German critics, but it was re-examined 20 years later and is nowadays considered as a masterpiece.

Böhm subsequently appeared with Jayne Mansfield in the striptease thriller Too Hot to Handle (Terence Young, 1959) and the French thriller La Croix des vivants/Cross of the Living (Ivan Govar, 1960) with Pascale Petit.

Next he appeared as the Nazi-sympathizing son of Lee J. Cobb in the remake of The Four Horsemen of the Apocalypse (Vincente Minnelli, 1963).

In Hollywood, he also played Jakob Grimm in the Cinerama spectacular The Wonderful World of the Brothers Grimm (Henry Levin, 1963), Ludwig van Beethoven in the Disney production The Magnificent Rebel (Georg Tressler, 1962) and a sadistic agent in The Venetian Affair (Jerry Thorpe) with Robert Vaughn. 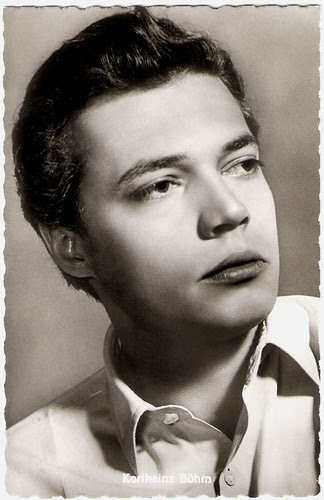 German postcard by Kolibri-Verlag, no. 2773. 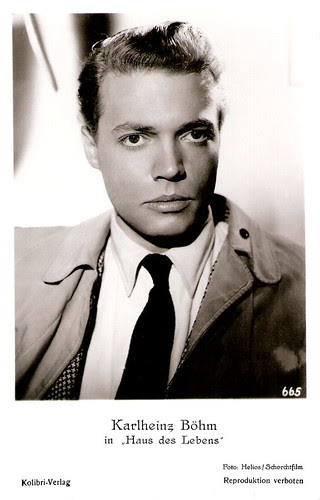 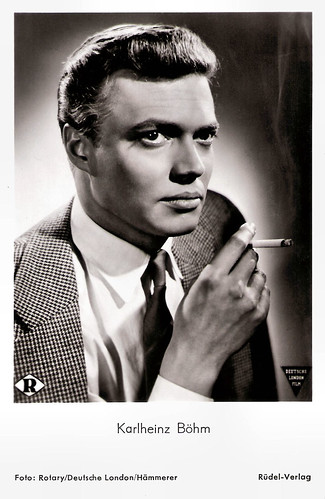 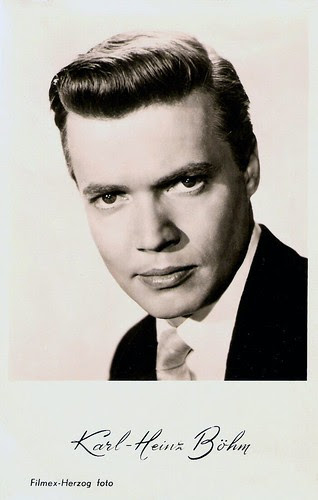 In the mid-1960s Karlheinz Böhm moved to Italy and focussed more on his theatre work. In 1964, he made his debut as a director of opera productions.

A second German film career began in 1972, when Rainer Werner Fassbinder made full use of Böhm's by now many-layered star image.

He first cast him as the worldly-wise Prussian councillor Wüllersdorf in Fontane - Effi Briest/Effi Briest (1974) opposite Hanna Schygulla, and then as the sadistic husband of Margit Carstensen in the TV thriller Martha (1974).

Later, Böhm was mainly appearing on stage or in TV productions. After losing a bet on the popular German TV show Wetten, dass..? (You Bet That..?) (1981), he founded the charity organization Menschen für Menschen (People For People). For over 30 years, Karlheinz Böhm promoted charities for starving children in Central Africa and Ethiopia.

Karlheinz Böhm died in Grödig, Salzburg, Austria. He was 86. 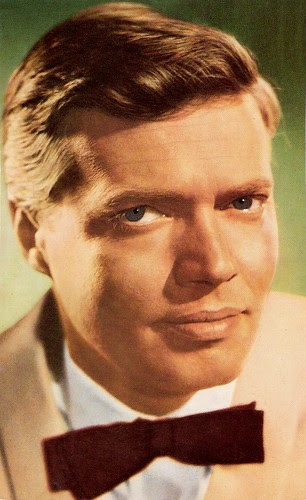 An amazing story...what a career!

He is a excellent actor, but mostly an outstanding human being. His work for the people of Ethiopia will be his legacy.

Yes, he is one of Germany's real stars of the post-war era. Handsome, a great actor with a diverse career, and sa man with his heart in the right place. Thanks for your comments.