Austrian child actress Traudl Stark (1930-?) was the Shirley Temple of the German-language cinema. Between 1935 and 1940 she made a dozen popular films in Austria. About what happened to her after the war, little is known. 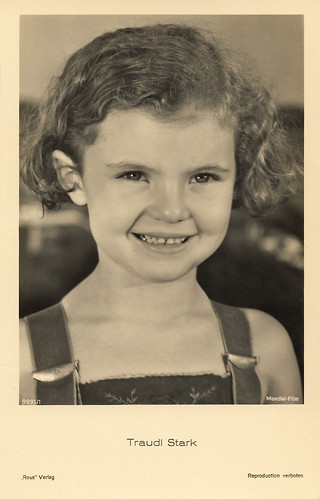 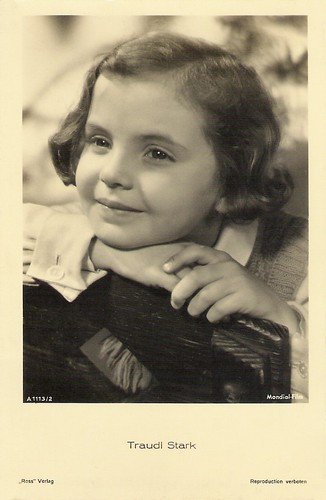 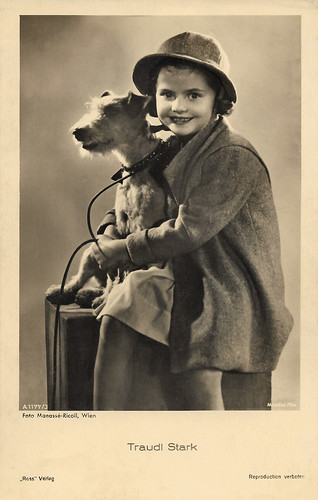 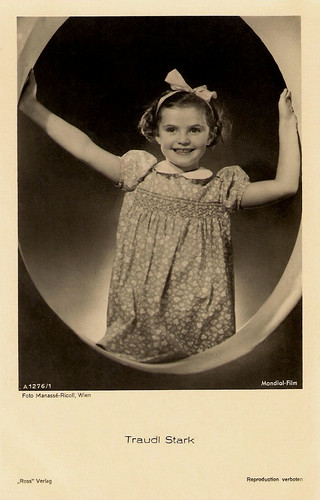 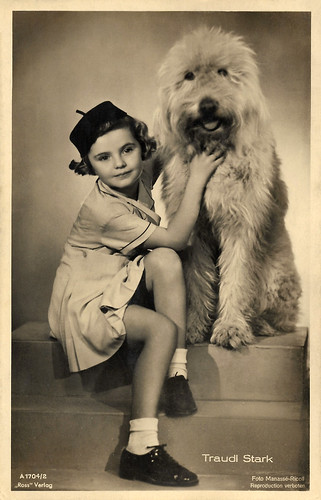 
Traudl Stark was born as Gertraude Marianne Münzel to the secretary Siegfried Stark and Margarete Münzel. Her parents married after her birth.

In 1934 little Traudl was discovered by Austrian filmmaker Robert Reich on the Wiener Messe (the fair trade of Vienna) during a film exhibition and he asked her for commercials.

She played her first film parts at the age of five in Die Fahrt in die Jugend/The Journey into Childhood (Carl Boese, 1935), the film operetta Im weißen Rößl/The White Horse Inn (Carl Lamac, 1935), and as the daughter of Fritz Rasp and Olga Tschechowa in the spy drama Lockspitzel Asew/Agent rovocateur Asew (Phil Jutzi, 1935).

The Berlin film company Siegel-Monopol tried to lure Traudl Stark away from the Mondial studio and there was even a court case.

The next years Traudl was seen for Mondial in Liebling der Matrosen/The Darling of The Sailors (Hans Hinrig, 1937) with Wolf Albach-Retty, and again as Peter in Peter im Schnee/Peter in the Snow (Carl Lamac, 1937). 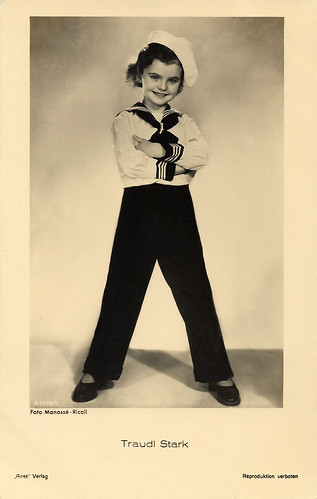 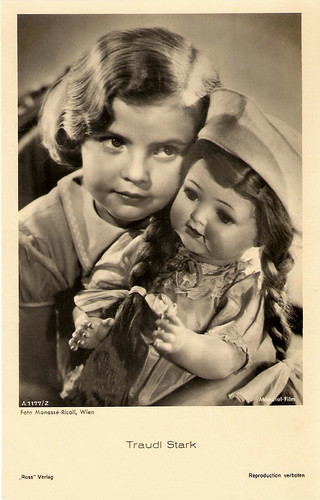 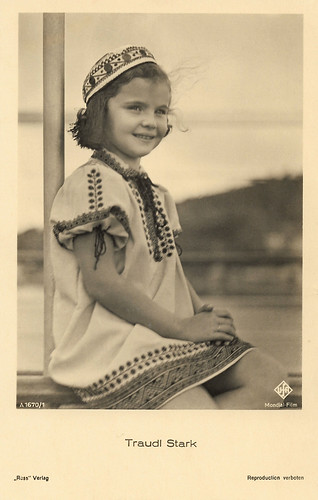 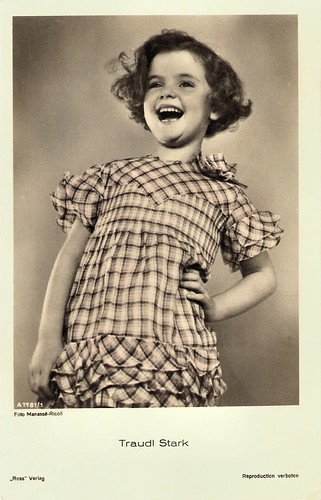 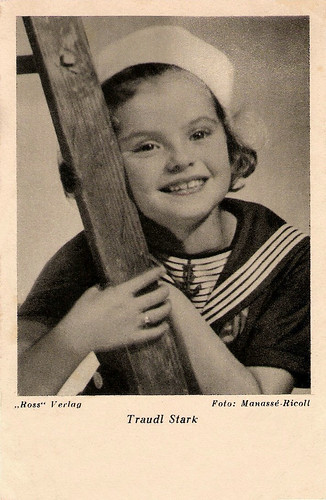 Her last part was in Der Fuchs von Glenarvon/The Fox of Glenarvon (Max W. Kimmich, 1940) starring Olga Tschechova. Because of the start of World War II, Traudl Stark never made an international career.

After the war Traudl had become a teenager, who wasn’t interested in the film any longer. Between 1945 and 1947 she acted on stage in Vienna.

In 1948 she married the American GI Jack Elliot and went with him to his hometown in Alabama, USA. At 18, Traudl Stark retired. There's little more information to be found about her life as an adult. 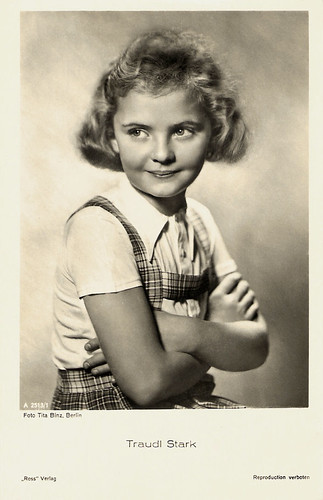 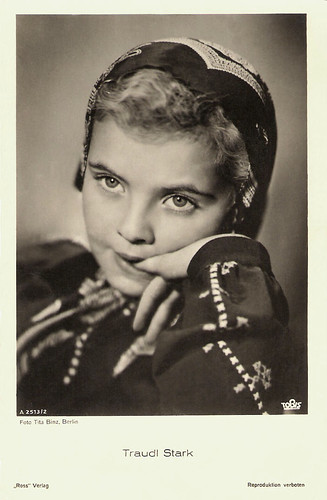 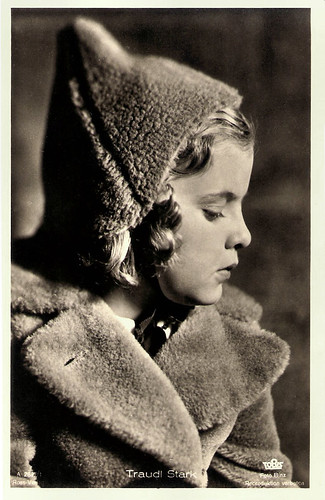 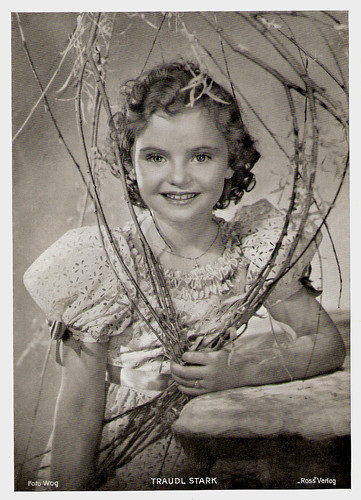 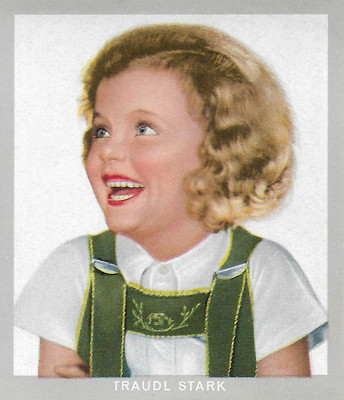 Traudl stark is my grandmother... she DID NOT have four children with her earlier husband Jack Elliot. That is a lie and would like you to get your facts straight

Oops, my excuses, I'll change this. There's so little information to find about her as an adult. Maybe, you can supply with more info?

Hi This may be a long shot but I am looking for Traudl and Jack Elliott’s children Linda Susan and Robert Dean. I am Jack Elliott’s sister. If someone with info could message my daughter in law at Kara.chandler.23@icloud.com. Thanks!