Luxembourg actress and dancer Germaine Damar (1929) started her career as an acrobat. She played in nearly 30 German films, including three films in which she was the partner of Peter Alexander. 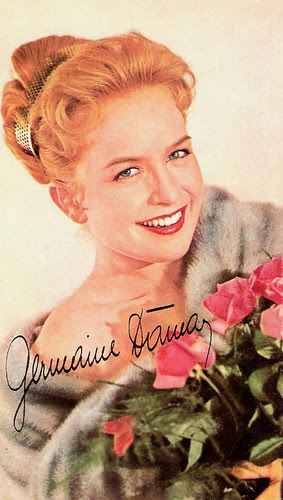 Dancing Stars
Germaine Damar was born as Germaine Haeck in Petingen in Luxembourg in 1929. She was the third of four daughters of metallurgical worker Dominique Haeck and his wife Barbara Poncelet. At the gymnastics club of Nidderkuer (Niederkorn) in Luxembourg, the 5-year-old Germaine layed the foundations for her future career. With her sister Geny and two gym teachers she formed the acrobatic quartet Los Habaneros. On 10 May 1940, after the invasion of Luxembourg by the German troops, she fled with her parents and siblings to Paris. There, the 12-year-old continued to develop her talents and she performed with her sister Geny and her former gym teacher Atilio Bariviera as Trio Deluxe at the Alhambra and the Bobino. She also took dance classes and was trained in acting and ballet. After the Second World War, she started a solo career and toured through Europe. She travelled to North Africa and the Orient to perform there with her sister Sylvie and Sylvie’s husband as Trio Vialine. In Cairo, they even performed for King Farouk. She used as her stage name Ria Poncelet. In Cairo she also met film actress Zarah Leander, who mediated a screen-test for her in Hamburg in 1952 at Herzog Filmverleih. Although producer Herbert Tischendorf and director Robert A. Stemmle were not satisfied with the test, she soon landed her first film role. Director Géza von Cziffra sought a talented dancer to replace the ill Maria Litto in his Revuefilm Tanzende Sterne/Dancing Stars (1952). He watched the screen-test and gave her the lead part opposite Georg Thomalla. She changed her name from Germaine Haeck into Germaine Damar and the press concluded for some time that she was a French dancer. 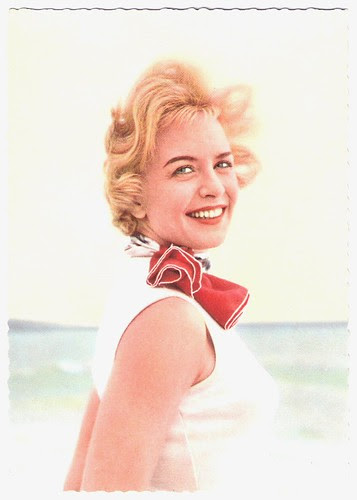 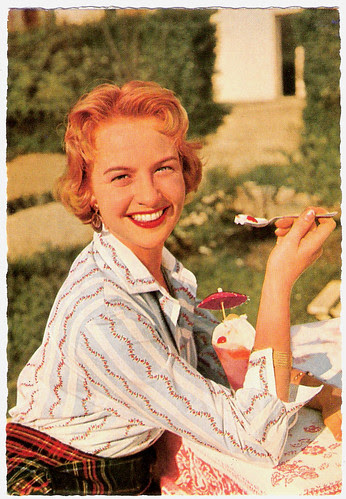 The Legs of Dolores
Tanzende Sterne/Dancing Stars (1952) became Germaine Damar’s breakthrough. Herzog offered her a 5-year contract and she went on to play in a total of 28 films. She appeared in such light entertainment fare as Südliche Nächte/Southern Nights (1953, Robert A. Stemmle), Die Drei von der Tankstelle/The Three of the Gas Station (1955, Hans Wolff) with Adrian Hoven, and Symphonie in Gold/Symphony in Gold (1956, Franz Antel) opposite Joachim Fuchsberger. Her best known musical was Die Beine von Dolores/The legs of Dolores (1957, Géza von Cziffra) with Claus Biederstaedt. In France she made the western musical Sérénade au Texas/Serenade of Texas (1958, Richard Pottier) with Bourvil and Luis Mariano. In three films she was the partner of Peter Alexander. These were the comedies So ein Millionär hat's schwer/It’s so hard to be a millionaire (1958, Géza von Cziffra), Peter schießt den Vogel ab/Peter shoots the bird (1959, Géza von Cziffra) and Salem Aleikum (1959, Géza von Cziffra). In the early 1960s Damar made two films in Spain, the comedies Cariño mío/Little Darling (1961, Rafael Gil) and Escala en hi-fi/Scale in Hi-Fi (1963, Isidoro M. Ferry). Her film Die Beine von Dolores/The legs of Dolores was such a big hit in Argentina, that Damar moved for three years to South America. There she became a popular star with her own TV show. In Germany, Damar had dated with actor Georg Thomalla and producer Andreas C. Schuller. The latter had ruined her financially with his flop Glück und Liebe in Monaco/Love and Happiness in Monaco (1959, Hermann Leitner). In Argentina, she met the American Roman G. Toporow and married with him. In 1964 she retired and two years later her son Roman Martin Toporow was born. Her husband died in 1993 and Germaine Damar has since then lived with her son in Fort Lauderdale, Florida. In 1997 she appeared in one more film, the science fiction thriller Nirvana (1997, Gabriele Salvatores) starring Christopher Lambert. Her role was a small supporting part. In 2011 the documentary Germaine Damar – Der tanzende Stern/Germaine Damar, the dancing star (2011, Michael Wenk) was presented in the Luxembourg cinema Ciné Utopia. The former dancing star herself was present and even sang one of her old songs. The audience gave her a standing ovation.


German trailer for So ein Millionär hat's schwer/It’s so hard to be a millionaire (1958). Source: Maxi Böhm Fangruppe (YouTube).