Irene Papas (1926) is a Greek actress of international fame. In a career spanning more than fifty years, she starred in over seventy films, including such classics as The Guns of Navarone (1961) and Zorba the Greek (1964). Papas also portrayed ancient Greek heroines in Antigoni/Antigone(1961), Ilektra/Electra (1962), Helen in The Trojan Women (1972), and Clytemnestra in Iphigenia (1977). 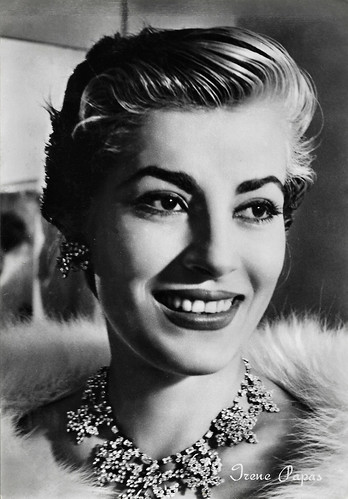 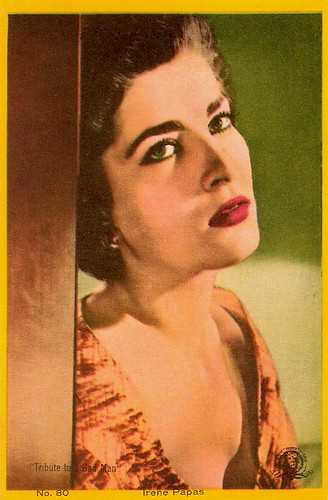 
Irene Papas (Greek Ειρήνη Παππά) was born as Eiríni Lelékou in Chilimodion, outside Corinth in Greece in 1926. At the age of 12, she enrolled in a dramatic school. She spent her first professional years as a singer-dancer in stage reviews and as a radio vocalist.

In 1943 she married director Alkis Papas. Four years later the marriage ended in a divorce, but she kept his name. Papas rose to stardom acting in Greek films as the drama Hamenoi angeloi/Fallen Angels (Nikos Tsiforos, 1948) and Nekri politeia/Dead City (Frixos Iliadis, 1952).

The next stop was Hollywood, where Papas appeared for MGM in the big-budget western Tribute to a Bad Man (Robert Wise, 1956) as the love interest of James Cagney. In Athens, she was trained in the classics of Greece's Golden Age. She played all the major tragic stage roles, including Medea and Electra. In addition, she was active in the contemporary productions put on by the Greek Popular Theatre in the late 1950s.

She also featured in the film Bouboulina (Kostas Andritsos, 1959) about the Greek heroine of 1821 (when Greeks fought the Turks). Papas became best known to international filmgoers for her portrayals of gutsy resistance fighter Maria Pappadimos in the major box-office hit Guns of Navarone (J. Lee Thompson, 1961), the widow in Alexis Zorbas/Zorba the Greek (Michael Cacoyannis, 1964), and the wife of Yves Montand in the political thriller Z (Costa-Gravas, 1968), which won the Oscar for Best Foreign Film in 1969.

In between, she starred in film adaptations of the classic Greek tragedies Antigoni/Antigone (George Tzavellas, Dinos Katsouridis, 1961) and Ilektra/Electra (Michael Cacoyannis, 1962), and she made her Broadway debut in 'That Summer, That Fall' (1967). 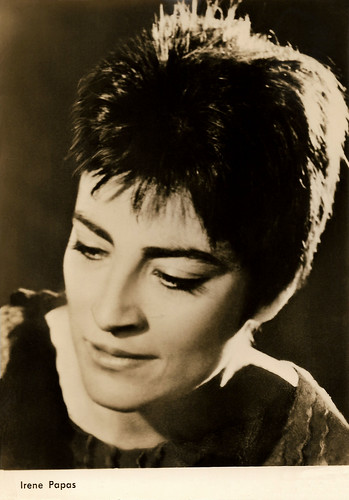 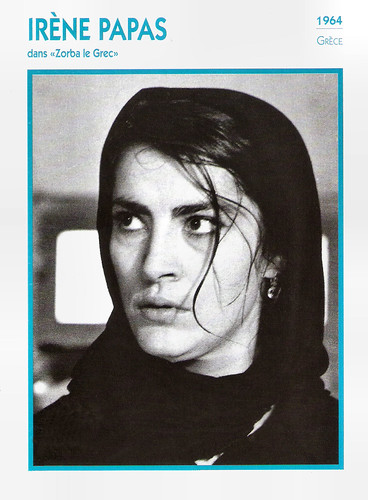 
Irene Papas is an occasional singer. In 1969, she recorded 11 songs of Mikis Theodorakis, for the album 'Irene Papas Songs of Theodorakis'. Papas and Theodorakis had worked together in 1964 on Alexis Zorbas/Zorba the Greek.

In 1971 she contributed to a song of the concept album '666' of the Greek rock band Aphrodite's Child, with singer Demis Roussos and Vangelis Papathanassiou, who later became an Oscar-winning composer. With Vangelis, she also recorded 'Odes' (1976), containing eight Greek folk songs, and 'Rapsodies' (1986), an electronic rendition of seven Byzantine liturgical hymns. The songs and hymns were re-arranged by Vangelis. Both records have gained the status of classical music in Greece and are very popular around the Greek Orthodox Easter.

In the cinema, she appeared as Catherine of Aragon in Anne of the Thousand Days (Charles Jarrott, 1969), opposite Richard Burton and Geneviève Bujold.

She also delivered award-winning performances in the ambitious Euripides adaptations directed by Michael Cacoyannis, playing Helen in The Trojan Women (1972) opposite Katharine Hepburn and Vanessa Redgrave, and Clytemnestra in Iphigenia (1977).

Her last film appearances were as Christian Bale’s mother in Captain Corelli's Mandolin (John Madden, 2001), and as a tourist on a cruise ship in Um Filme Falado/A Talking Picture (Manoel de Oliveira, 2003) with Catherine Deneuve.

In 2002, she was named 'Europe's woman', a title given to women who offer a lot to European civilization. In her speech, she sang a Greek folklore song. According to IMDb, she has no intention of returning to Greece to play in the theatre because she has suffered from continuous negative criticisms.

Irene Papas lives in Greece, Spain, and Italy. She is the aunt of director-producer Manousos Manousakis and actor Aias Manthopoulos.


Trailer for The Guns of Navarone (1961). Source: IFILMuser (YouTube).