Meeting in a Streetcar
Dorothea Josephina Friedericke Nicolette Kreisler was born in Mödling, Austria-Hungary (now Austria) in 1909. Some sources say in a field hospital near Budapest, while her father was a colonel of the cavalry, and her mother had accompanied her husband when she was pregnant. As a child Dorit showed already ambitions for the stage. The Viennese theater critic Dr. Liebstöckl reportedly was so impressed with her when they met in a streetcar, that he advised the young girl to work on the stage. He talked with her parents and they finally agreed. After following acting and dancing classes she made her theatrical debut in a performance of Jedermann/Everyman in Böhmen. From there she went on to St. Gallen, Switzerland, where she mostly played light-weight roles. 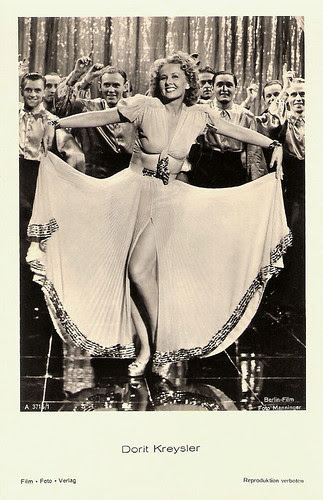 Have You Ever Kissed in the Dark
In 1934 Dorit Kreysler made her film debut. She filled in for the ill Renate Müller in the Ufa production Freut euch des Lebens/Enjoy Yourselves (1934, Hans Steinhoff). She also starred in a romantic comedy about two competing hotels, Jungfrau gegen Mönch/The Maiden Against The Monk (1934, E.W. Emo) with Ida Wüst, in Frischer Wind aus Kanada/Fresh Wind Out of Canada (1935, Erich Holder, Heinz Kenter) with Paul Hörbiger, and in Eine Nacht an der Donau/A Night on the Danube (1935, Carl Boese). Then she focussed again on her theatre work. After guest roles in the Metropoltheater in Berlin, she turned in 1938 again to films, like Peter spielt mit dem Feuer/Peter Plays With Fire (1938, Joe Stöckl) with Hans Holt, and Die Frau ohne Vergangenheit/Woman Without A Past (1939, Nunzio Malasomma) with Sybille Schmitz. Her best known films include the comedy Frau nach Maß/Wife Bespoke (1940, Helmut Käutner) with Hans Söhnker, Wiener Blut/Vienna Blood (1940, Willi Forst) with Willy Fritsch, Karneval der Liebe/Carnival of Love (1943, Paul Martin) with Johannes Heesters and the film version of Johann Strauss' comic opera Die Fledermaus/The Bat (1944-1945; released in 1946, Géza von Bolváry), in which she played Adele. 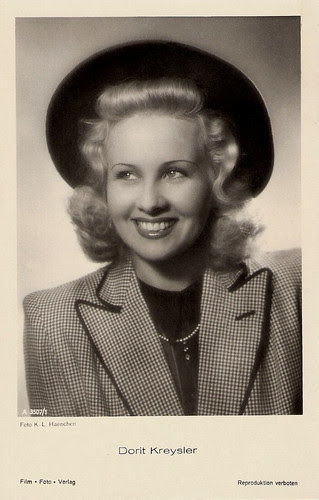 Easy Girl
In 1945 Dorit Kreysler married the White-Russian Timothé Stutloff. At the first day after the end of WWII her daughter Anja was born. In 1953 the pair divorced again. During the 1950’s Dorit played mainly supporting roles in films. Among her post-war films were Artistenblut/Artist’s Blood (1949, Wolfgang Wehrum), Ich mach dich glücklich/I’ll Make You Happy (1950, Sándor Szlatinay), Sensation in San Remo (1951, Georg Jacoby) with Marika Rökk, and Dieses Lied bleibt bei Dir/Cabaret (1954, Willi Forst) with Paul Henreid, and Opernball/Opera Ball (1956, Ernst Marischka) with Johannes Heesters. Her last film appearance was in the Caterina Valente musical Das Einfache Mädchen/The Easy Girl (1957, Werner Jacobs). From then on she concentrated again on stage work. In 1970 she appeared in the TV film Die Vertagte Nacht/The night adjourned (1970, Otto Anton Eder). During her stage tours Dorit Kreysler always returned to her home city Graz. There she died in 1999.


Karneval der Liebe/Carnival of love (1943), was an elaborate musical with big production numbers and songs by Michael Jary. Reportedly, propaganda minister Josef Goebbels was so infuriated by Jary's 'American music', that he instructed the music not be mentioned in the press reviews of the film. Dorit Kreysler is the scene stealer as the delightful Kitty, the dancer/singer to whom Johannes Heesters' character is engaged. They sing this song briefly in the film and it later became known as Haben Sie schon mal im Dunkeln geküsst/Have you ever kissed in the dark?