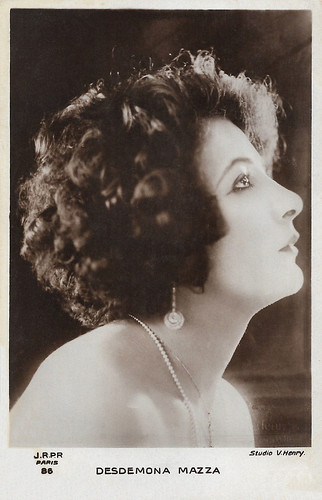 Desdemona Mazza was born in Castel San Pietro, Italy in 1901.

One of her first films was the Caesar Film production Tre milioni di dote/Three million gift (Camillo De Riso, 1920), which was released in two episodes. That same year she starred in La naufraga della vita/The shipwrecks of life (Eugenio Perego, 1920).

That year she also appeared in the French production L'appel du sang/The Call of the Blood (Louis Mercanton, 1921) with Gabriel de Gavrone. The film was shot in Rome, but this proved to be an entry to the French cinema for her.

Janiss Garza at AllMovie: “This romantic melodrama, directed by Louis Mercanton, was not as technically advanced as American made films and had to be edited for U.S. consumption, but it had several strong points - it was filmed on location at a real French chateau, and its star, Madame Rejane, was a contemporary of Sarah Bernhardt, and one of the most famous European actresses of her generation. This picture, in fact, was Rejane's last screen appearance - she died shortly after completing her role.” 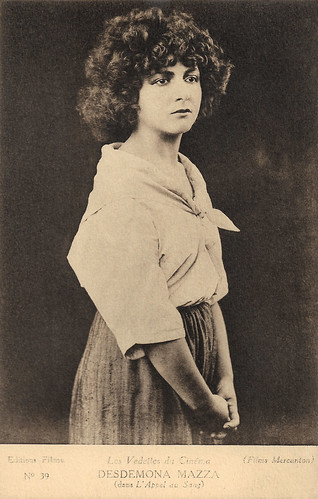 Desdemona Mazza appeared in a small part in the popular serial Les mystères de Paris/Mysteries of Paris (Charles Burguet, 1922) with Huguette Duflos. It is based on the novel 'The Mysteries of Paris' by Eugène Sue. The serial ran in twelve installments.

After another interval in her career, Desdemona Mazza played opposite Charles Vanel in Martyre/Martyrdom (Charles Burguet, 1927).

In 1930 she made her first sound film, L'enfant de l'amour/Illegitimate Child (Marcel L’Herbier, 1930) starring Emmy Lynn and Jaque Catelain. Her role was only a bit part.

The next year she played a supporting part in Olive passager clandestine/Olive stowaway (Maurice de Canonge, 1931) with Maurice de Canonge and Marcel Dalio. It was to be the last film of Desdemona Mazza.

We could not find more online information about her. 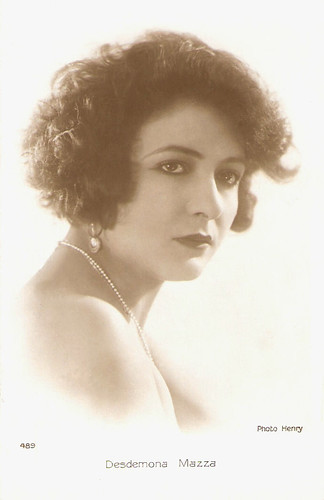