Austrian film and theatre actor Oskar Homolka (1898–1978) had a stocky appearance, bushy eyebrows and a rather Slavic-sounding name, which led many to believe he was Eastern European or Russian. His expressive face predestined him to play character roles as a scoundrel, pimp or communist spy. 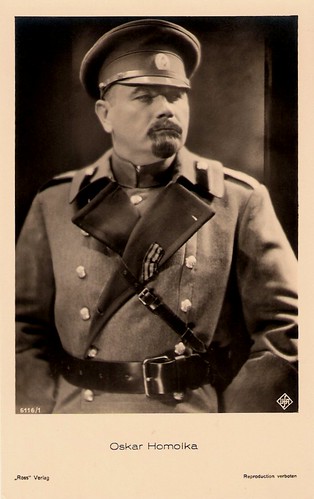 
Oskar Homolka was born in Vienna, Austria-Hungary (now Austria) in 1898.

He studied at the Akademie für Musik und darstellende Kunst (Imperial Academy of Music and Performing Arts) between 1915 and 1917, and served in the Austrian Army during World War I. After that he made his debut at the Komödienhaus in Vienna.

Success in Vienna led to stage work in Munich, where he appeared in 'Edward II', but also worked as a co-director with Bertolt Brecht. Later he worked in Berlin, where he was a member of Max Reinhardt's troupe.

He made his film debut in Die Abenteuer eines Zehnmarkscheins/The Adventures of a Ten Mark Note (Bertold Viertel, 1926) with Werner Fuetterer.

Among his other silent films were the German productions Dirnentragödie/Women without Men (1927, Bruno Rahn) with Asta Nielsen, Schinderhannes/The Prince of Rogues (Kurt/Curtis Bernhardt, 1928), and Die Rothausgasse/The Street of Shame (Richard Oswald, 1928).

Although he didn't possess a polished pronunciation, he could assert himself in the sound film era. He appeared in German films like Hokuspokus/Hocuspocus (Gustav Ucicky, 1930) with Lilian Harvey and Willy Fritsch, Dreyfus/The Dreyfus Case (Richard Oswald, 1930) with Fritz Kortner, and Spione am Werk/Spies at Work (Gerhard Lamprecht, 1933) with Brigitte Helm.

In 1932 he was successful as the director of the stage play 'Pygmalion'. But with the rise to power of Adolf Hitler and the Nazi party, he was one of the many Jewish actors and theatrical people who fled Germany. First he moved to Paris, then to Great Britain and later to the USA. He wrote his first name with a ‘c’ from now on. 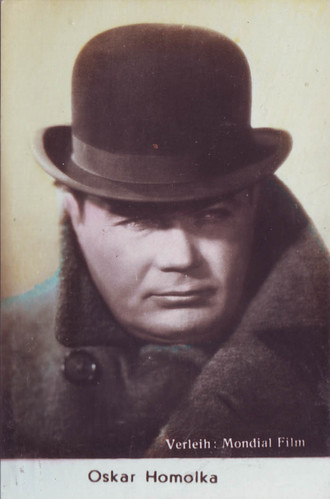 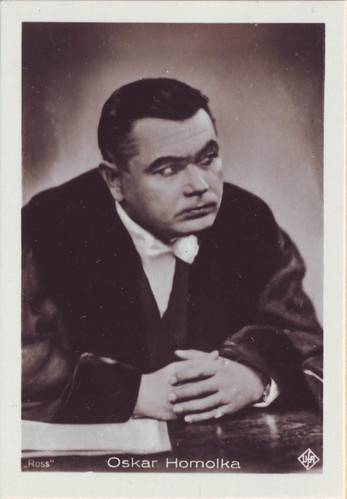 He acted also as Verloc, opposite Sylvia Sidney in Alfred Hitchcock's film Sabotage (1936), one of his best screen roles. Rather than cast him as a stereotypical German heavy, Hitchcock, while never excusing Verloc's guilt, perversely endowed this character with a sympathetic edge. Verloc is guilty of sabotage, but is also clearly a man trapped between loyalties. Homolka's tense and frightened performance heightens this complex conception. He literally seems to shrink with guilt over his role in the death of his young brother-in-law, Stevie. Verloc's death, visualised in Hitchcock's famous dinner-table montage, seems an act of mercy. In these last moments, Homolka effectively releases the tensions built up across the narrative and greets death with a peculiar calm.

It was a good visiting card for his departure to the US in 1937. In Hollywood he became a popular supporting actor in films like Seven Sinners (Tay Garnett, 1940) with Marlene Dietrich, Comrade X (King Vidor, 1940) with Clark Gable and Hedy Lamarr, The Invisible Woman (A. Edward Sutherland, 1940) with John Barrymore, and Ball of Fire (Howard Hawks, 1941) starring Barbara Stanwyck and Gary Cooper.

In 1940 he also made his Broadway debut in 'Grey Farm'. Although he often played villainous roles – Communist spies, Soviet-bloc military officers or scientists – he was nominated for an Oscar for his portrayal of the crusty uncle Chris in the film version of I Remember Mama (George Stevens, 1948). In 1944 he had already played this role on stage.

Beginning in 1951, Homolka began also working outside the United States. In Italy, he played the great Russian patriot Marshal Mihail Kutuzov in War and Peace (King Vidor, 1956), based on the novel by Leo Tolstoy. He also acted with Ronald Reagan in Prisoner of War (Andrew Marton, 1954), with Marilyn Monroe in The Seven Year Itch (Billy Wilder, 1955), with Sophia Loren in The Key (Carol Reed, 1958), and with Silvana Mangano in La Tempesta/Tempest (Alberto Lattuada, 1958).

Homolka settled in England in 1966. He chalked up two eye-catching turns in the spy thrillers Funeral in Berlin (Guy Hamilton, 1967) and Billion Dollar Brain (Ken Russell, 1968), playing the Russian intelligence officer Stok, adversary to Michael Caine's Harry Palmer. He appeared with Katharine Hepburn in The Madwoman of Chaillot (Bryan Forbes, 1969). His last film was the romantic drama The Tamarind Seed (Blake Edwards, 1974) in which he was the nasty Russian General Golitsyn.

On television he had starred in 1957 as a villain in an episode of Alfred Hitchcock Presents called Reward to Finder. He later appeared in several TV series, including Quiller (1975), Kojak (1975), and The Invisible Man (1976). In 1967 Homolka was awarded the Filmband in Gold or the Deutscher Filmpreis for his outstanding contributions to German cinema.

He was married four times. His first wife was the Hungarian Jewish film and theatre actress Grete Mosheim. They married in Berlin in 1928 and divorced in 1937. His second wife, Baroness Vally Hatvany, was also a Hungarian actress. They married in December 1937, but she died four months later. In 1939, Homolka married the socialite and photographer Florence Meyer, who was a daughter of Washington Post owner Eugene Meyer. They had two sons, Vincent and Laurence. They later divorced. His last wife was actress Joan Tetzel, whom he married in 1949. They remained together until Tetzel's death in 1977.

Oscar Homolka died of pneumonia in Sussex, England, in 1978, just three months after his wife's death. He was 79.

Hi
I've been lurking on your site for awhile and i just wanted to let you know how wonderful it is.

However,i can't seem to find a way to e-mail you directly.
Please e-mail me at drillers at rogers dot com.
I'd like to discuss several items with you.
thanks,
Amit