Hungarian actor Imre Ráday (1905-1983) started his film career as a handsome jeune premier in the European cinema of the silent era. During more than five decades he appeared in over fifty Hungarian films and TV films and was one of the most famous actors of his country. He also worked as a theatre director, university professor and radio show host. 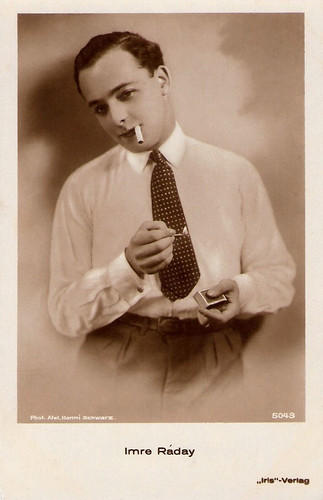 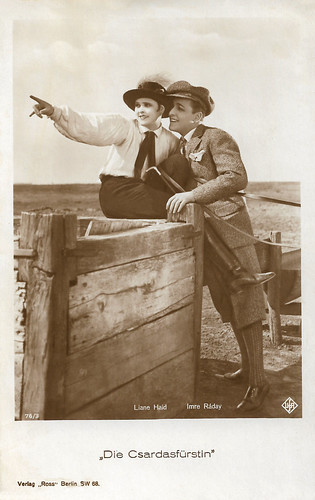 
Imre Ráday was born in Budapest, Austria-Hungary (now Hungary) in 1905. He was sometimes credited as Rádai Imre.

Originally he wanted to be a painter. After graduating high school he attended the College of Applied Arts. Then he enrolled at the Rózsahegyi Kálmán drama school, which in 1923 was conducted.

In Germany he appeared in the following years in such Ufa productions as the drama Am Rande der Welt/At the Edge of the World (Karl Grune, 1927), and the comedy Die Frau im Schrank/The Woman in the Wardrobe (Rudolf Biebrach, 1927).

In the courtroom drama Der Kampf des Donald Westhof/The Trial of Donald Westhof (Fritz Wendhausen, 1928), Ráday played a trouble-prone patsy who ends up being accused of murder. All he'd wanted to do was prevent the marriage of the heroine, played by Erna Morena, to a nasty moneylender, but things turned ugly when the villain ended up dead. At his trial, Westhof looks like a dead duck, but suddenly the hard-nosed prosecuting attorney breaks down and confesses that it was he, and not Daniel, who committed the crime. In his review at AllMovie, Hal Erickson concludes: “Strange, strange stuff, made stranger by the implication that the ‘hero’ is a half-wit.”

With the arrival of the sound film his German film career halted. Ráday then returned to Budapest where the first golden period of Hungarian film making just started. During the 1930s, mainly entertaining comedies were made in Hungary. The handsome Ráday and other actors from those comedies would become legends of the Hungarian cinema.

Csokolj Meg Edes/Kiss Me, Darling (Bela Gaal, 1932) was Raday’s first Hungarian sound comedy. He starred opposite Marika Rökk, later a superstar of the Ufa. It was only the third talking feature to be produced in Budapest. He appeared opposite Franciska Gaál in Peter (Hermann Kosterlitz aka Henry Koster, 1934).

During the 1930s, Ráday appeared in nearly 20 of such light-hearted comedies. Two of them are now considered classics of the Hungarian cinema: A kölcsönkért kastély/The Borrowed Castle (Ladislao Vajda, 1937) and A hölgy egy kissé bogaras/The Lady is a Little Crazy (Ákos Ráthonyi, 1938). In A kölcsönkért kastély, two couples want to get married, but because of financial and social difficulties they aren't able to. Then comes the great idea of lending a rich girl's mansion to a poor young man, so that they will seem just the opposite of what they are actually.

Ráday played the poor but handsome man in love. Daniel Papp reviews on IMDb: “With many original jokes and superb acting, this comedy from Hungary is one of the best!” The following year Imre Ráday appeared in another successful romantic comedy, A hölgy egy kissé bogaras/The Lady is a Little Crazy (Ákos Ráthonyi, 1938). These domestic success stories were accompanied by international, mostly German acclaim. 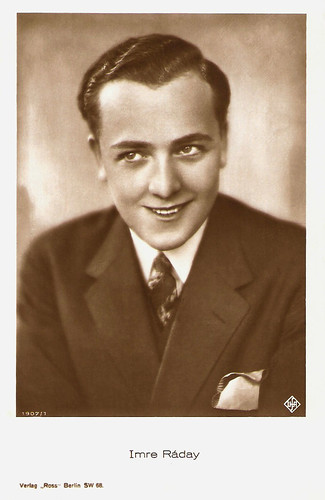 
Imre Ráday was Jewish and when the Nazis entered Austria-Hungary in 1938 his film career stopped. Happily he survived the Second World War. In 1944-1945, he and some 2,500 other Jewish men, women and children were saved by a daring and unique rescue operation.

Responsible for this rescue was Captain László Ocskay. As director of the Clothing Collection Labour Service Company, Ocskay was able to protect them from the German Nazis and the Hungarian Arrow Cross (Hungary's Nazi party) in the Abonyi Street Jewish School in Budapest. Ocskay was able to secure protection from the constant threat posed by the vicious Arrow Cross by using his contacts to arrange for armed SS officers to permanently stand guard outside the building.

After the war László Ocskay’s incredible personal sacrifice was rarely acknowledged. In 2008 the documentary Ocskay László százados, az elfelejtett hös/Captain László Ocskay, the forgotten hero (Gergely Fonyó, 2008) was made. The film was screened in the European Parliament building in Brussels and has been nominated for an award at the 39th Hungarian Film Festival.

From 1950 till 1956, Imre Ráday worked as a teacher at the Theatre and Film Academy. From 1957 till 1970 he was a member of the Attila József Theatre. Ráday was considered an excellent actor, but after the war he did not make a film for seven years.

Then he appeared in Teljes gözzel (Félix Máriássy, 1951), followed by supporting roles in comedies like Dollárpapa (Viktor Gertler, 1956) and Puskák és galambok/Guns and Doves (Márton Keleti, 1961).

Though his film career would never become as successful as during the 1930s, he was respected as one of the great Hungarian actors and regularly appeared in films during the 1960s and 1970s. Among his best films of this period are Falak/The Lost Generation (András Kovács, 1968) and Déryné hol van?/Mrs. Dery Where Are You? (Gyula Maár, 1975). The latter drama was entered into the 1976 Cannes Film Festival, where Mari Töröcsik won the award for Best Actress. 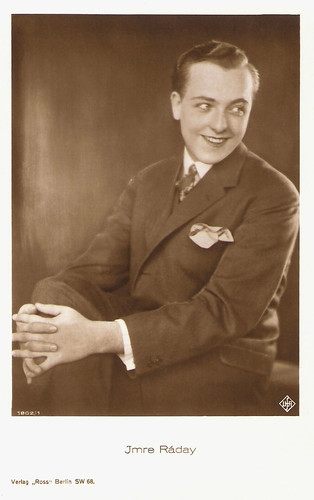 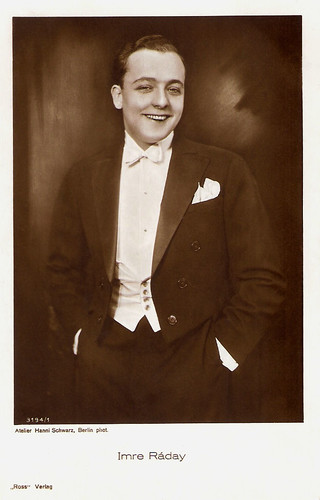