Film director, co-producer, writer, and actor Sergei Bondarchuk (1920 –1994) was one of the most important filmmakers of the Soviet Union and had a career that spanned over five decades. The theme of war ran through many of the films he directed. He won an Oscar for his spectacular epic Voyna i mir/War and Peace (1967), in which he also starred as Pierre Bezukhov. 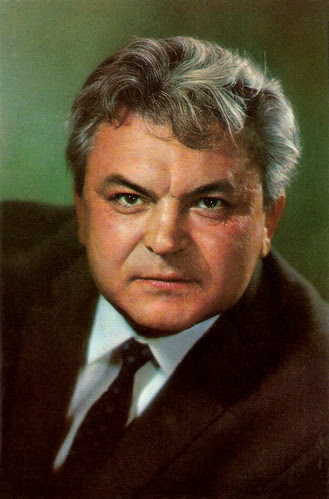 People's Artist of the USSR
Sergei Fedorovich Bondarchuk (Russian pronunciation: Серге́й Фё́дорович Бондарчу́к; Ukrainian: Сергі́й Фе́дорович Бондарчу́к) was born in the village of Belozerka, in the Kherson Governorate, Ukraine (now Bilozerka, Kherson Oblast, Ukraine) in 1920. Bondarchuk spent his childhood in Southern Ukraine, then in Southern Russia in the cities of Yeysk and Taganrog. Young Bondarchuk was fond of theatre and books by such authors as Anton Chekhov and Leo Tolstoy. As a schoolboy in Taganrog, he made his acting debut in 1937 on the stage of the Chekhov Drama Theatre. From 1938 on he studied at the Rostov-on-Don theater school. In 1942 his studies were interrupted by the Nazi invasion during WWII. Bondarchuk was recruited for the Red Army to fight against Nazi Germany and served for four years. After being discharged from the army in 1946, he studied under Sergei Gerasimov at the acting department at the All-Union State Institute of Cinematography (VGIK) in Moscow. In 1948 he made his film debut in the war drama Povest o nastoyashchem cheloveke/Story of a Real Man (1949, Aleksandr Stolper) then co-starred in another war drama Molodaya gvardiya/The Young Guard (1949, Sergei Gerasimov). In 1949 he married actress Inna Makarova. They had two children, including the actress Natalya Bondarchuk, but they divorced in 1956. For his title role in Taras Shevchenko (1952, Aleksandr Alov, Vladimir Naumov, Igor Savchenko), Bondarchuk won the Stalin Prize, and was also designated People's Artist of the USSR. At the age of 32, he was the youngest Soviet actor ever to receive this honor. Then he played the title role in the internationally renowned adaptation of William Shakespeare's Otello/Othello (1956, Sergei Yutkevich). Irina Skobtseva appeared opposite him as Desdemona, and four years later, the two actors married. Bondarchuk expressed his own experience as a soldier of WWII when he starred in Sudba cheloveka/Destiny of a Man (1959, Sergei Bondarchuk) about an ordinary, unheroic soldier struggling to survive in a German POW camp. He had played the role before in a televised version of a short story by Mikhail Sholokhov, but he was so unhappy with the result that he decided to direct a film version himself. His compelling performance and internationally acclaimed directorial debut earned him the top prize at that year's Moscow Film Festival and the prestigious Lenin Prize of the USSR in 1960. 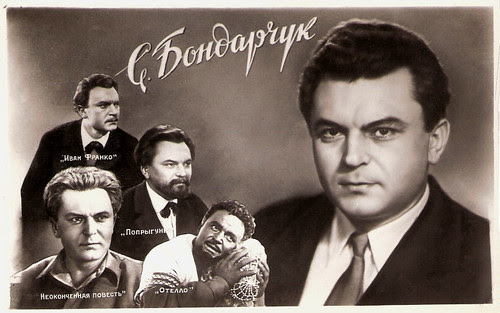 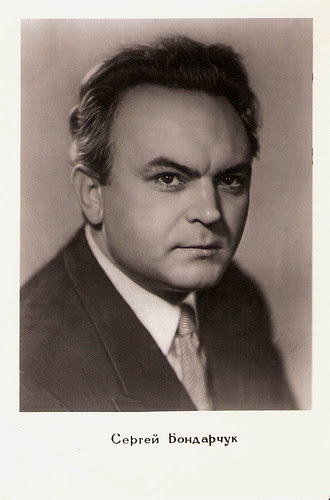 Tens Of Thousands Extras
Sergei Bondarchuk shot to international fame with the astonishing epic Voyna i mir/War and Peace (1965-1967, Sergei Bondarchuk), based on the famous novel by Leo Tolstoy. He both directed and played Pierre Bezukhov opposite a very impressive Lyudmila Savelyeva as Natasha Rostova. The film took seven years to complete (from 1961 till 1968) and on original release it totaled more than ten hours of cinema. The Russian release was in two mammoth parts, totaling 507 minutes. For the US cinemas, the film was edited in four parts with a total of seven hours. The production involved over three hundred professional actors from several countries and also tens of thousands extras from the Red Army in filming of the 3rd two-hour-long episode about the historic Battle of Borodino against Napoleon's invasion. The film was shot in 70mm wide-screen and color and Bondarchuk made history by introducing several remote-controlled cameras that were moving on 300 meter long wires above the scene of the battlefield. Remarkable were also his extensive pans, sometimes 360 degrees. With an estimated cost of $100,000,000 (over $800,000,000 adjusted for inflation in 2010, according to Steve Shelokhonov at IMDb), it was the most expensive project in film history. It won Bondarchuk the Academy Award for Best Foreign Language Film in 1969, and a reputation of one of the finest directors of his generation. After this victory, he starred with Yul Brynner, Hardy Krüger, Franco Nero, Sylva Koscina and Orson Welles in the Yugoslav epic Bitka na Neretvi/Battle of Neretva (1969, Veljko Bulajic). Although he was now the most awarded actor and director in the Soviet Union, he was not a member of the Soviet Communist Party. Soon Bondarchuk received an official recommendation to join it. To prevent running into hurdles with the Soviet government, he joined the Party in 1970. A year later, he was appointed president of the Union of Cinematographers, a semi-government post in the Soviet system of politically controlled culture. In 1970 he also began teaching drama at VGIK while continuing to direct and act. 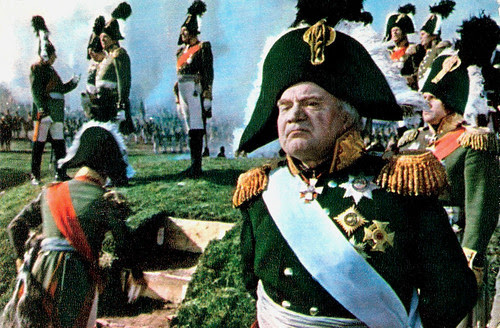 A Symbol Of Conservatism
Sergei Bondarchuk’s first English language film was the big-budget Russian-Italian co-production Waterloo (1970, Sergei Bondarchuk), co-produced by Dino De Laurentiis. In the cast were Rod Steiger as Napoleon, Christopher Plummer, Jack Hawkins, and several Russian actors including Sergo Zaqariadze, Yevgeni Samojlov and Oleg Vidov. Orson Welles made a cameo as the old King Louis XVII of France. The result was remarkable for its masterly reconstruction of the final battle of Napoleon, but the film failed at the box office although it got favorable reviews. In 1975 Bondarchuk directed another war drama, Oni srazhalis za rodinu/They Fought for Their Country (1975, Sergei Bondarchuk) with Vasili Shukshin, which was entered into the Cannes Film Festival. Then followed the two-part Krasnye kolokola/Red Bells (1982-1983, Sergei Bondarchuk) starring Franco Nero and Ursula Andress. This chronicle about the 1917 Russian Revolution was based on Ten Days that Shook the World, by American journalist John Reed, who had been portrayed a year earlier by Warren Beatty in Reds (1981, Warren Beatty). Bondarchuk’s next film, Boris Godunov (1986, Sergei Bondarchuk) based on the play by Alexander Pushkin, was also screened at Cannes, but the cultural climate had changed. It was now the time of the liberalization of the Soviet Union under Mikhail Gorbachev. In the Russian cinema Bondarchuk had become a symbol of conservatism. Steve Shelokhonov writes at IMDb that through the 1970’s and 1980’s Bondarchuk had “evolved into a politically controlled figure and turned to making such politically charged films”. So he was voted out as president of the Union of Cinematographers in 1986. Bondarchuk's last feature film was an epic TV version of Tikhiy Don/Quiet Flows the Don (2006, Sergei Bondarchuk) based on the eponymous novel by Nobel Prize winner Mikhail Sholokhov, starring Rupert Everett. It was filmed in 1992-1993 but premiered on the Russian television only in November 2006. At the end of filming, just before post-production, Bondarchuk learned about unfavorable clauses in his contract. It lead to a bitter dispute with the producers over the rights to the film. Amidst this legal battle the production was stopped and the film remained unedited in a bank vault, even after his death. Bondarchuk suffered a heart attack in 1994 and died in Moscow at the age of 74. His death caused a considerable mourning in Russia. Bondarchuk was survived by his second wife, actress Irina Skobtseva and their children, actress Alyona Bondarchuk, and actor/director Fyodor Bondarchuk. His eldest daughter, actress Natalya Bondarchuk is best known for her role in Andrei Tarkovsky's masterpiece Solaris. His son, Fyodor who had appeared with him in Boris Godunov, dedicated his directorial debut, 9 rota/The 9th Company (2005, Fyodor Bondarchuk) to his father. The film is set in war-torn Afghanistan, whereas Sergei's directorial debut was set in WWII. In 2007, his ex-wife Inna Makarova unveiled a bronze statue of Sergei Bondarchuk in his native Yeysk.