Dutch tenor Willy Alberti (1926 - 1985) sang in Dutch and Italian. The internationally popular ‘Tenore Napolitano’ was also an actor, and a radio and TV personality. 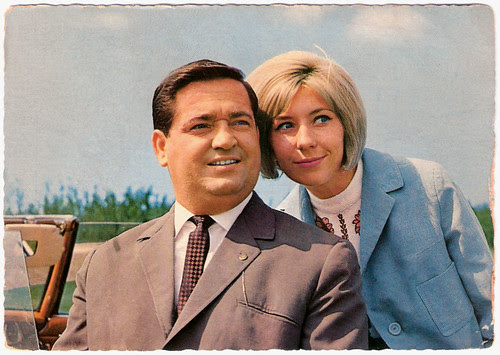 Willeke
Willy Alberti was born as Carel Verbrugge in Amsterdam, The Netherlands in 1926. He was the third of eight children born to Jacobus Willem Verbrugge and Sophia Jacoba van Musscher. One of his cousins, Jantje van Musscher, would also become a popular Amsterdam singer under the stage name Johnny Jordaan. At the time, de Jordaan was a famous working-class neighbourhood in the heart of Amsterdam. In 1931, the 5-year-old Carel made his singing debut. From then on, he sang on street corners, often with his cousin Jantje. He began recording professionally in the early 1940's as 'Willy Alberti Tenore Napolitano'. He married Hendrika Geertruida 'Ria' Kuiper in 1944, and his daughter Willeke Alberti was born a year later. In 1950 followed son Tonny Alberti. After the war Alberti established himself in the Netherlands with hits like Ik zing dit lied voor jou alleen (1946, I Sing This Song For You Alone), Veel mooier dan het mooiste schilderij(1946, More beautiful Than Any Picture) and Droomland(1950, Dreamland). In the 1940’s he also worked as an actor in popular dramas by Henvo (Henk Voogd) a.o. 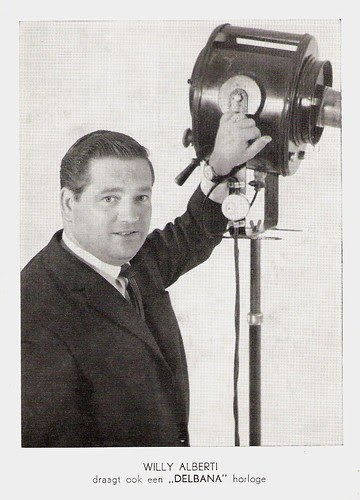 Tenore Napolitano
In the 1950’s Willy Alberti became increasingly popular with his Italian songs He often performed them on the Duch radio in the popular show De bonte dinsdagavondtrein (The colorful Tuesday evening train). In 1958 he made his debut on Dutch television in the show of the legendary Dutch clown Dorus. Alberti had a string of hits, including Ci-ciu-ci (1955), Vivere (1955), Nel blu dipinto di blu/Volare (1958), Come prima (1958), the #1 hit Piove (1959), Una marcia infa (1959), and another #1 hit, Marina (1959). As Guillermo Alberti or Gino Fattori he was also internationally well known. His version of Marina was even the first Dutch hit to reach the Billboard Hot 100 in the USA. Alberti played a part as a café owner in the successful Dutch film Rififi in Amsterdam (1963, John Korporaal aka Giovanni Korporaal) starring Maxim Hamel and Johan Kaart. However, his film appearances were only incidental. In duet with his daughter Willeke he scored hits on the Dutch charts like Sei rimasta sola (1963) and Sabato sera (1964). Solo he had another #1 hit with Buono notte bambino (1963). From 1965 father and daughter presented a popular monthly television show at the public broadcasting station AVRO. During the 1960’s, Alberti won twice the prestigious Edison Award. 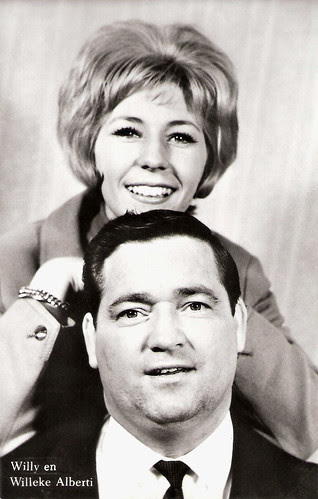 Tribute to the Queen
In the 1970’s Willy Alberti's fame began to recede, though he did score a few hits, including Juliana bedankt(1980, Thanks Juliana), a tribute to former Queen Juliana, and another duet with daughter Willeke, Niemand laat z'n eigen kind alleen(1983, Nobody Leaves His Child Alone). He also played another small part in a film, Rooie Sien/Red Sien (1975, Frans Weisz), which featured his daughter. He started a record store, where his son Tonny worked. In 1984 Willy Alberti was diagnosed with liver cancer, and he died the next year at the age of 58. A Willy Alberti museum was established in Amsterdam in 1998; but it quickly closed due to a lack of interest. His grandson Johnny de Mol is now a well known actor and TV personality in the Netherlands.