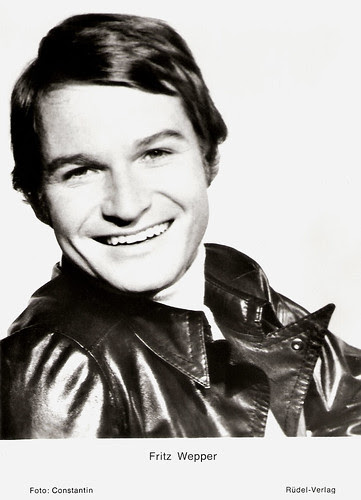 A Seemingly Unimportant Bridge
Fritz Wepper was born in Munich, Germany in 1941. His father was the jurist Friedrich Karl Wepper, who is missing since early 1945 in Poland. As a 9-year old boy, Fritz played in children’s TV programs at the Bayerische Rundfunk (Bavarian TV). In 1952 he made his stage debut in Peter Pan. He made his film debut with a small supporting part in Sauerbruch – Das war mein Leben/The Life of Surgeon Sauerbruch (1954, Rolf Hansen), starring Ewald Balser. More small roles followed in the drama Der dunkle Stern/The Dark Star (1955, Hermann Kugelstadt), the Grimm Brothers’ fairytale Tischlein deck dich/Table, Donkey and Stick (1956, Jürgen von Alten) and the comedy Eine verrückte Familie/A crazy family (1957, Harald Philipp) starring Paul Dahlke and Hans Moser. Wepper also appeared in the Heinz Rühmann comedy Der Pauker/The Crammer (1958, Axel von Ambesser) and then had his breakthrough in the anti-war film Die Brücke/The Bridge (1959, Bernhard Wicki). Dan Pavlides at AllMovie: “this is an excellent little film with little plot and no known names on the roster. In the final days of World War II, German teenagers join the Nazi army in a futile attempt to stop the enemy invasion. A sympathetic officer places the boys as guards of a seemingly unimportant bridge. The seven youths are thrown into battle when American tanks unexpectedly appear and try to cross the bridge. The film has a definite anti-war message.” From then on he also played on stage, such as at the Kleinen Komödie in Munich. In the cinema he was seen in such films as Question 7 (1961, Stuart Rosenberg), the Walt Disney production Miracle of the White Stallions (1962, Arthur Hiller), and on television in the Shakespeare adaptation Was Ihr wollt/As You Like It (1962, Franz Peter Wirth) with Ingrid Andree, and Sonderurlaub/Special leave (1963, Rainer Erler). In 1964, the then 23-year old Wepper won the Filmband in Gold as Best Young Actor for his role in the war drama Kennwort: Reiher/The River Line (1964, Rudolf Jugert) starring Peter van Eyck and Marie Versini. 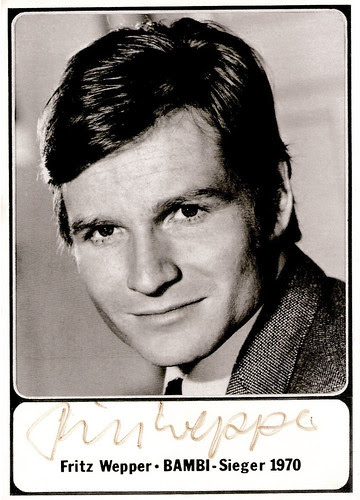 Harry Klein
Fritz Wepper’s film career was limited by the crisis in the German film industry of the 1960’s. He only found roles in mediocre genre films as the crime drama Wenn es Nacht wird auf der Reeperbahn/When Night Falls on the Reeperbahn (1967, Rolf Olsen), Der Arzt von St. Pauli/ Bedroom Stewardesses (1969, Rolf Hoppe) with Curd Jürgens, the Edgar Wallace thriller Der Mann mit dem Glasauge/The Man with the Glass Eye (1969, Alfred Vohrer) starring Horst Tappert, and the comedy Wir Hau'n Die Pauker in Die Pfanne/We'll Take Care of the Teachers (1970, Harald Reinl) with Uschi Glas. He found new employment in the budding German TV industry. Wepper became internationally known with the popular Krimi series Der Kommissar/The Commissioner (1969–1976). In 66 episodes, Wepper portrayed Harry Klein, the assistant of commissioner Keller (Erik Ode), from the series' start until 1974. In 1972 Fritz Wepper had another chance at an international film career with his role opposite Liza Minnelli and Michael York in the groundbreaking musical Cabaret (1972, Bob Fosse), based on Christopher Isherwood's Goodbye to Berlin. In this for 10 Oscars nominated film, he played Fritz Wendel, a Jew passing as a Christian. Although it lost Best Picture to The Godfather (1972, Francis Coppola), Cabaret won eight Oscars, including awards to Liza Minnelli and Bob Fosse. Hollywood agency MCA offered Wepper stage and film roles, but Der Kommissar producer Helmut Ringelmann did not allow Wepper to attend the Oscar gala, nor to accept the offered roles. It was a bitter disappointment for the actor.

Most Successful German TV Series Ever
In 1974, the character Harry Klein was replaced in Derrick by his younger brother Erwin, played by Fritz Wepper's brother Elmar Wepper. Harry was transferred to the new Krimi series Derrick, starring Horst Tappert. In Derrick (1974-1998), Wepper would play Harry, now promoted to inspector, 281 times. The series was sold to over 100 countries, and is reportedly the most successful German TV series ever. In the cinema, Wepper appeared in the French Sci-Fi film Le Dernier Combat/The Last Battle (1983), the first feature-length film by the then 24-year-old Luc Besson. With his brother Elmar, Fritz Wepper worked together in the TV series Zwei Brüder/Two Brothers (1994-2001). He also had a role at the American made-for-TV remake of Agatha Christie’s mystery Murder on the Orient Express (2001, Carl Schenkel), starring Alfred Molina as Hercule Poirot. Since 2002 Wepper plays the lead in the TV series Um Himmels Willen/For heaven's sake, for which he was awarded the Deutscher Fernsehpreis (German TV Award). He stars in the series as mayor Wolfgang Wöller. In 2004 Harry Klein returned in the comic animation film Derrick – Die Pflicht ruft/Derrick - Duty calls! (2004, Michael Schaack, Michael Ekbladh), and once again Wepper gave the character his voice. It was not a success. Since 1979, Fritz Wepper has been married to Angela von Morgen, Countess von Grotz and former Princess von Hohenzollern. They have one daughter, actress Sophie Wepper, with whom he appears in the TV series Mord in bester Gesellschaft/High Society Murder (2007-). From 2009 on, Wepper lives together with camera woman and director Susanne Kellermann, who is 36 years his junior. In 2011 their daughter Filippa was born.