Austrian gentleman-actor Karl Schönböck (1909–2001) with his always meticulously trimmed moustache had a major film and stage career of 70 years. He was a star of the Munich cabarets, performed in many sophisticated boulevard plays and also played more than 100 elegant roles in German films and TV series. 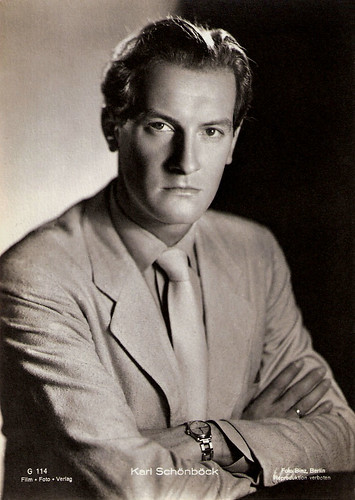 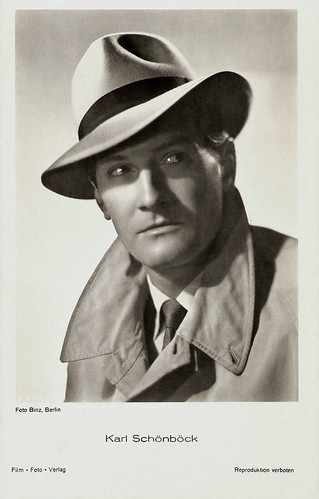 Bon Vivant Or Grand Seigneur
Karl Ludwig Josef Maria Schönböck was born in Vienna, Austria-Hungary (now Austria) in 1909. He was the son of Emanuel Schönböck, a Danube steamboat ship captain, and his wife Louise Schönböck-Bogner. He grew up in Vienna and already performed on stage with an amateur theatre group while he still went to school. He seemed to go on with a career as a successful athlete. He was second in the heavyweight category at the boxing championship for newcomers in 1926. Later he also won the West German championship in fencing. After studying one year at the University of Vienna, he enrolled at Vienna’s Akademie für Musik und darstellende Kunst (Academy of Music and Dramatic Art) and also took singing lessons from Professor Jekelius in Berlin. He worked for the radio station Ravag. In 1930 he had his stage debut in the Stadttheater in Meissen as Ashley in Vater sein dagegen sehr (To be a father on the other hand very much). In the following 70 years he had engagements and guest appearances in theaters in Hannover, Salzburg, Königsberg, Bonn, Berlin and Munich. At the beginning of his career he played dramatic roles, but his focus later moved to the boulevard theater where he usually was cast as the bon vivant or grand seigneur. In 1936 he made his film debut in was also his film debut in Das Mädchen Irene/The Girl Irene directed by Reinhold Schünzel and starring Lil Dagover and Sabine Peters. Filmportal.de: “At just 27 years old, he already played a graying British aristocrat in this melodrama – a role type that he increasingly specialized on during the following years. Thus, the tall Schönböck who always wore a meticulously trimmed moustache convincingly portrayed gallant bon vivants, aristocrats, and distinguished socialites”. His charming womanizing characters were often a bit vain and therefore not quite taken seriously. Many roles followed in films such as Daphne und der Diplomat/Daphne and the Diplomat (1937, Robert A. Stemmle) with Karin Hardt, the comedy Der Blaufuchs/The Blue Fox (1938, Viktor Tourjansky) starring Zarah Leander, Casanova heiratet (1940, Viktor de Kowa) with Lizzi Waldmüller, the operetta Frau Luna/Lady Moon (1941, Theo Lingen) and Titanic (1942, Herbert Selpin), a film about the most known ship disaster of the 20th century. 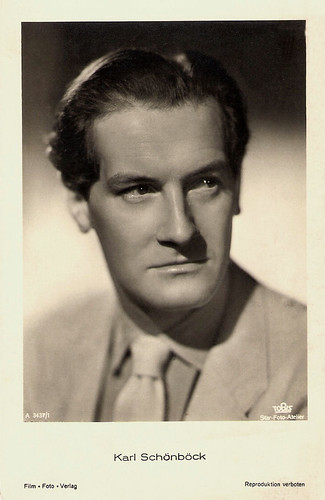 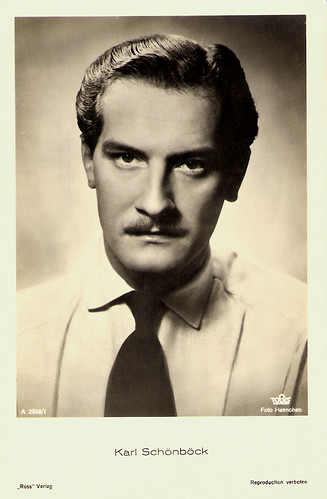 Sophisticated Boulevard Theater
After the Second World War, Karl Schönböck made his first appearance at Munich’s Kammerspiele. In Munich he also appeared in the revue theater Die Schaubude (the show tent) and was one of the founders of the cabaret Der Kleinen Freiheit (the little freedom). In both cabarets he appeared with his then wife, actress Herta Saal. Besides, Schönböck performed at theatres in Stuttgart, Vienna, and Berlin, in sophisticated boulevard theater plays, like Private Lives by Noel Coward and Somerset Maugham’s Lady Frederick. He also appeared in many film and TV roles, mostly as the nonchalant grand seigneur or the suave gentleman.Successes were Berliner Ballade (1948, Robert A. Stemmle) starring Gert Fröbe, the musical comedy Feuerwerk/Fireworks (1954, Kurt Hoffmann) with Lili Palmer and Romy Schneider, the remake of Der Kongreß tanz/The Congress Dances (1955, Franz Antel) starring Johanna Matz, and Der Traum von Lieschen Müller/The Dream of Lieschen Mueller (1961, Helmut Käutner) featuring Sonja Ziemann. Late highlights of his self-mocking, caricaturing style were his impersonations as a professor in the satire Schtonk! (1992, Helmut Dietl) about the affair of the forged Hitler diaries, and Halali oder der Schuss ins Brötchen/Halali or the Shot in the Buns (1994, Joachiem Roering), in which Schönböck played an old landowner and hunter, who’s last will is to shoot his final deer. His last major role was as the father of hobby-detective Friedrich von Thun in several episodes of the German Krimi series Die Verbrechen des Professor Capellari/The crimes of Professor Capellari (1998-2001). Schönbock was honored with major awards: the Bundesverdienstkreuz der Bundesrepublik Deutschland I. Klasse (Germany’s cross of merit) in 1979, the Filmband in Gold in 1985 and Österreichisches Ehrenkreuz für Wissenschaft und Kunst (Austria’s cross of merit) in 1989. In 1988 he published his memoirs, Wie es war durch achtzig Jahr (How it was through 80 years). Schönböck was married twice. First to actress Herta Saal, who passed away in 1964. They had a daughter, Christine (1942). From 1965 on he was married to actress Corinna Genest. Karl Schönbock died of a stroke in 2001 in Munich, Germany. He was 92. 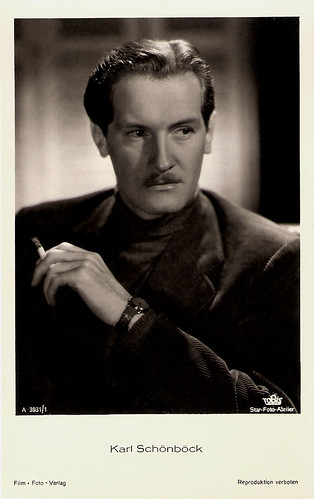 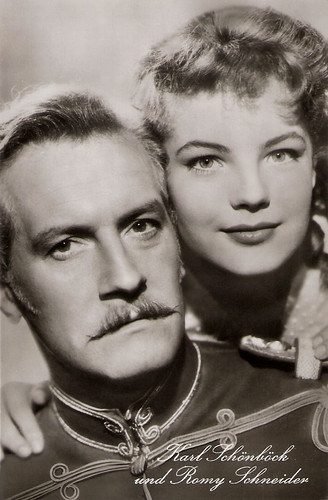