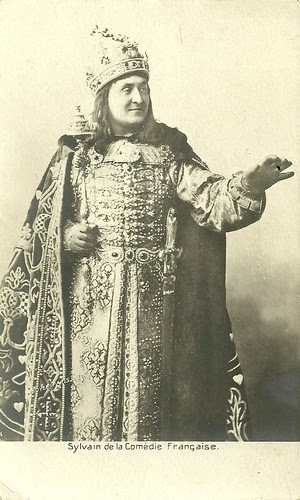 Very Successful at the Comédie Française
Eugène Charles Joseph Silvain was born in Bourg-en-Bresse, France in 1851. Sylvain was an officer in the French army during the Franco-Prussian war of 1870-1871. After the war he left the army to become a stage actor. He debuted in Algeria, then played Beaumarchais in Paris. There he studied at the Conservatoire d'art dramatique. In 1878 he was accepted at the Comédie Française, where he became very successful. He played several times Ergaste in L’Ecole des maris by Molière. Sylvain was not only a typical Molière performer but also often acted in plays by Victor Hugo such as Hernani. In 1883 he was appointed sociétaire of the Comédie Française, and from 1916 to 1928 he was doyen (dean) of the prestigious theater company. In 1922 made his film debut in the silent film, Molière, sa vie, son oeuvre/Moliere, his life, his work (1922, Jacques de Feraudy). In this documentary De Feraudy first related about the places where Molière was born, studied, played his works and died. Then, through engravings, Molière is seen performing at Versailles and in front of Parisian audiences. Finally Sylvain and other actors of the Comédie-Française interpret scenes from Molière's work including Le dépit amoureux, Tartuffe, Les précieuses ridicules, Le Misanthrope, le bourgeois gentilhomme, Don Juan and Le malade imaginaire. Sylvain married actress Louise Hartman, who had a brilliant career at the Théâtre de l'Odéon, and afterwards at the Comédie Française. Their children were the dramaturg Jean Sylvain and Jeanne Sylvain, who was married to actor/director Edmond Roze. 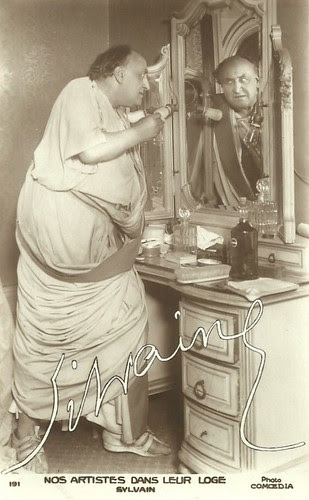 Fat, Skinny, Wrinkled, With Warts In Their Faces
In 1928 Sylvain left the Comédie Française. This coincided with his role in the silent masterpiece La passion de Jeanne d’Arc/The Passion of Joan of Arc (1928, Carl Theodor Dreyer). La passion de Jeanne d’Arc is a true pan-European production with a Danish director, a German art director (Hermann Warm, famous for his sets for Caligari), a Polish-Hungarian director of photography (Rudolph Maté), and a largely French cast, led by Maria Falconetti – also a member of the Comédie-Française - as Jeanne d’Arc. The film focused on the famous trial of Jeanne d’Arc in 1431. Sylvain played Pierre Cauchon, bishop of Beauvais, who leads the ecclesial court that must trial Jeanne. Despite the enormous set by Warm, Dreyer’s camera focuses only on emotions by keeping the camera close to the faces of Jeanne and her persecutors. They try to nail her for blasphemy and heresy, and are commissioned by the English to find a ground to burn her at the stake. Dreyer thus accentuates the ugliness of the judges, who are presented as fat or skinny, wrinkled, having warts in their faces etc. Their faces contrast with the virgin-like features of Jeanne. In addition to Sylvain, other judges were played by a.o. André Berley, Maurice Schutz and Antonin Artaud. For a long time the film was considered lost until a print was found in a mental hospital in Oslo. Sylvain died not too long after the release of the film, in 1930 in Marseille, the city where he had built his own theatre in 1923. His wife died just a few months after. Both were buried at the Père-Lachaise cemetery in Paris. 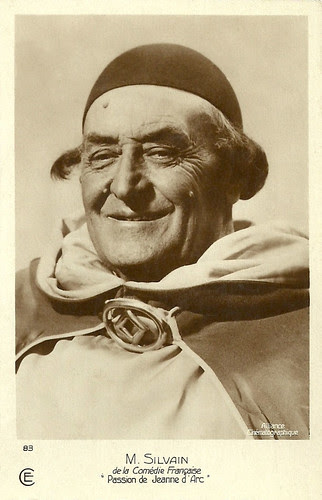