Ever since her first film appearance Mari Törőcsik (1935) has been the leading Hungarian screen star. The sensitive and intelligent actress played a great diversity of roles both on stage and for the camera. During her long career she appeared in more than 120 films and TV films. 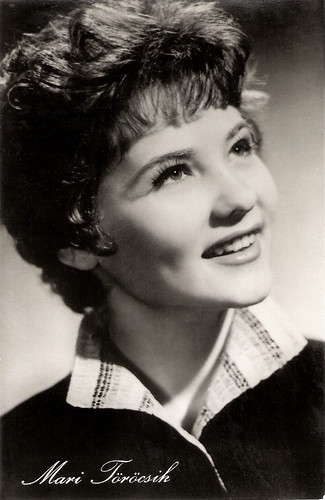 A Superbly Refined Screen Presence
Mari Törőcsik (or Törőczik) was born in Pely, Hungary, in 1935. She graduated in 1957 after which she went to work for the National Theatre. Her first role was Solveig in Peer Gynt. She would stay with the National Theatre for 25 years. She studied with leading Hungarian director Zoltán Fábri who cast her in his famous film, Körhinta/Merry-Go-Round (1955), which brought Mari Törőcsik immediate international recognition at the Cannes Film Festival that year. The story concerns a young village couple (Mari and Bela Barsi) who date at a traditional country fair. Hal Erickson at AllMovie: “As they dance the night away, the boy expresses his love for the girl, resulting in a startling reaction. The film is unabashedly sentimental, but the performances of the two leads transcend the storyline's goofier passages.” Dina Iordanova writes at Senses of Cinema: “A breakthrough indictment of patriarchy, Körhinta was among the first films that explored the tensions between patriarchy and the socialist rush for collectivisation of agriculture”and she describes Töröcsik as “Seemingly plain by appearance, she has a superbly refined screen presence“. 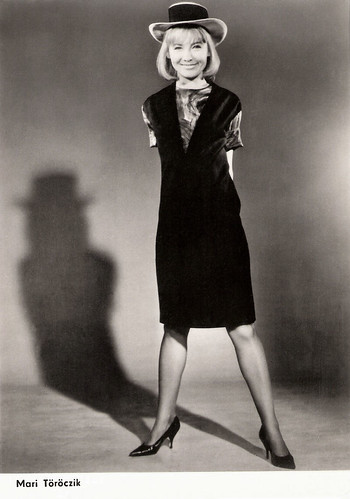 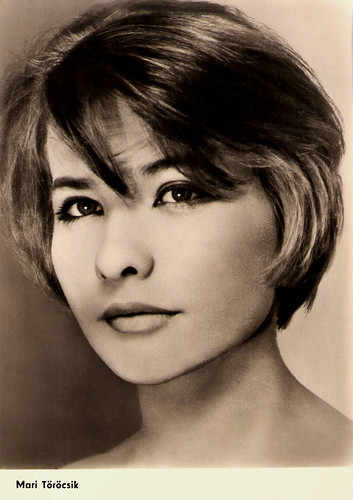 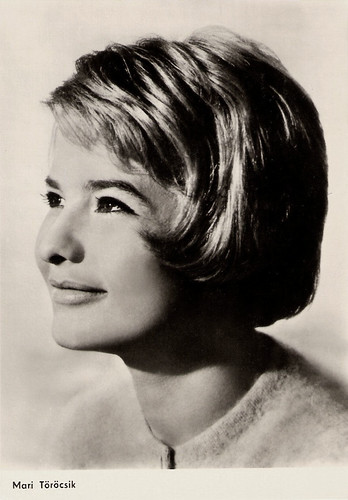 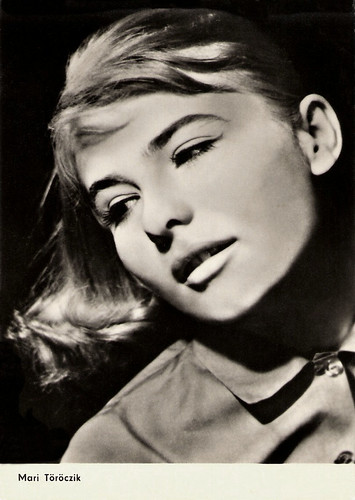 Cannes Film Festival
In the 1960’s, Mari Törőcsik was ‘discovered’ by a new generation of directors. Miklos Jancsó gave her a leading role in his political drama Csend és kiáltás/Silence and Cry (1967), and later in Szerelmem, Elektra/Electra, My Love (1974), a drama based on the Greek myth. In 1968, she also worked with Márta Mészáros on Holdudvar/Binding Sentiments (1968), and with Jerzy Skolimowski on the melodrama Párbeszéd/Dialogue (1963, Jerzy Skolimowski, János Herskó). Töröcsik won twice an award at the Cannes Film Festival. In 1971 she shared the Special Mention to the film's lead actresses for Szerelem/Love (1971, Károly Makk) with Lili Darvas who played the old woman in the film. This tender drama deals with two women in the 1950’s, the wife and old mother of a soldier who are forced to spend a lot of time together. While they love each other, they also act out their personal neuroses on the other. A following cooperation with Károly Makk, Macskajatek/Catsplay (1972) was nominated for the 1974 Academy Award for Best Foreign Film. Earlier, A pál-utcai fiúk/The Boys of Paul Street (1969, Zoltán Fábri) also had been nominated for an Oscar. In 1976 Mari won the Best Actress award in Cannes for Déryne, hol van?/Mrs Déry, Where Are You? (1976, Gyula Maár). That year she tied the prize with Dominique Sanda for L'eredità Ferramonti/The Inheritance (1976). In 1983, she received a special award at Cannes for her whole career. 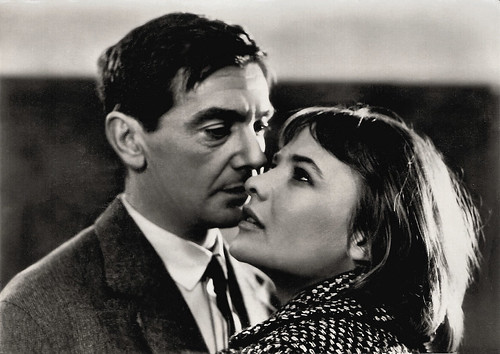 International Productions
In the 1980's, another generation of filmmakers started to work with Mari Törőcsik. Every second year, she played a role in the film of the best graduating student at the Film School. She had memorable leads in Pál Sándor's Szerencsés Dániel/Daniel Takes a Train (1983) and in Attila Janisch's Hosszú alkony/Long Twilight (1997). She was the choice for crucial secondary parts in Napló apámnak, anyámnak/Diary for My Father and Mother (1990, Márta Mészáros), and Szamárköhögés/Whooping Cough (1986, Péter Gárdos), a sensitive exploration of the failed Hungarian 1956 anti-communist revolution. She also incidentally appeared in international productions, such as The Music Box (1990, Costa-Gavras) with Jessica Lange, Mio caro dottor Grasler/The Bachelor (1991, Roberto Faenza) starring Keith Carradine, Le Violon De Rothschild/Rotschild’s Violin (1997, Edgardo Cozarinsky) and Sunshine (2000, István Szabó) starring Ralph Fiennes. Recent films in which she played are Telitalálat/Winning Ticket (2003, Sandor Kardos), Egy Het Pesten Es Budan/ A Long Weekend in Pest and Buda (2003, Károly Makk) for which she was reunited with Lili Darvas, and Eszter Hagyateka/Eszter's Inheritance (2008, Jozsef Sipos) with Eszter Nagy-Kálózy. In her homecountry Mari Törőcsik was awarded with the Kossuth Prize twice, in 1973 and 1999. Mari Töröcsik has been married twice, first she married actor Gyula Bodrogi, and from 1973 on she is married to film director Gyula Maár, with whom she has a child. She was cast by Maár in a number of female roles focusing on mid-life crisis, like Végül/At the End of the Road (1973), Déryné hol van?/Mrs. Déry, Where Are You? (1975) and Teketória/Flare and Flicker (1976), as well as in Hoppá/Whoops (1993). Mari Törőcsik’s Cannes experiences are recounted in Gyula Maár's documentary Töröcsik Mari Cannes-ban (1997). Mari continues to be active in the cinema. Recently, she appeared in the romantic drama Kaland/Adventure (2011, József Sipos) and played the lead in the TV film Ideje az öregségnek/It's time for an old phenomenon (2011, Emil Novák).

Another interesting talent i would never have known about without your blog. Thank you Bob.