Tiny Italian singer and comedian Renato Rascel (1912 – 1991) appeared in more than 60 films between 1942 and 1972. In 1960, he represented Italy in the Eurovision Song Contest with the song Romantica. It was placed equal eighth out of thirteen entries. 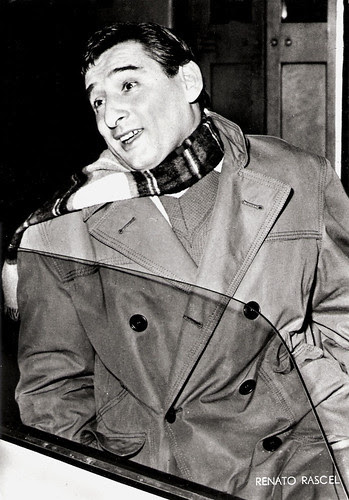 Distinctive Kind Of Humor
Renato Rascel was born Renato Ranucci in Turin, Italy in 1912. His parents, opera singer Cesare Tanucci and ballet dancer Paola Massa, were performing a show in Turin at the time of his birth. Renato could really say that he was born in the back stage of the theater and that’s where he spent all of his life. His father tried to make it up to him by having him baptized at Saint Peter's in Rome. He grew up in Rome. At the age of 8, Renato started to sing for the ‘white voices choir’ of Saint Peter under direction of Don Lorenzo Perosi, and at 14, he played drums in ballrooms around Rome. Soon after, he joined the Di Fiorenza Sisters as an actor, dancer and clown, and in 1934 he was hired for his first big role by the Schwartz Brothers in the operetta Al Cavallino bianco (The White Horse). In 1935, he joined Elena Gray for his first foreign tour in Africa, and in 1941 he created his own theater company. There he began to develop his distinctive kind of humor that in the following years crowned him as the inventor of the ‘non-sense’ with phrases like “two friends that didn’t know each other”. He decided to make his small size work for him, being only 1.58 m (5’2”) tall. He became known as Il piccoletto nazionale (the tiny Italian). In his show he accentuated his stature by wearing huge extravagant coats, his most famous one had a large pocket on the back. In this period he created some of his most famous characters such as Napoleon and Il Corazziere (a parody on his size since the Corazziere is a military division that employs only soldiers over 6 feet tall). These characters brought him an extraordinary popularity in Italy. In 1942, Rascel made his film debut in Pazzo d’amore/Crazy For Love (1942, Giacomo Gentilomo). At the set he met actress Tina de Molo for whom he wrote the title song of the film. They soon married. 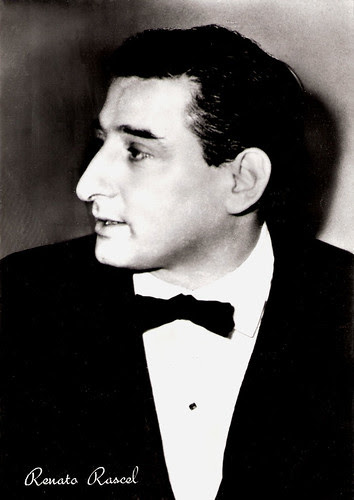 Italian postcard by Rotalfoto, Milano, no. 254. 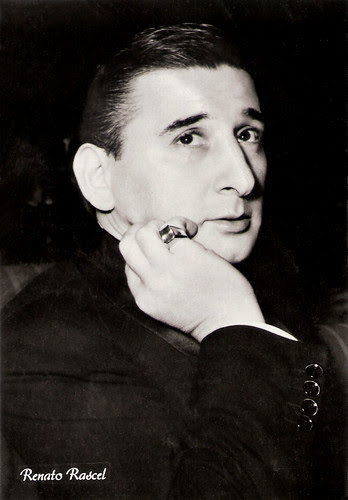 A Nebbishy Nobody
After the war, Renato Rascel appeared in more than 60 films. An early example was Figaro qua, Figaro là/Figaro here, Figaro there (1950, Carlo Ludovico Bragaglia) opposite Italy’s favorite comedian Totò. In these films Rascel developed and established his very peculiar kind of humor. One of Renato Rascel’s most interesting films is Il Cappotto/The Overcoat (1952, Alberto Lattuada) based on the novel by Nikolai Gogol. Hal Erickson at AllMovie: “some consider the film to be Lattuada's best 'psychological study.' Comedian Renato Rascel plays a nebbishy nobody who spends his life-savings on a fancy overcoat. Suddenly, the nobody becomes a somebody, proving beyond doubt that clothes make the man. And then one day, the overcoat is stolen... Fleshing out the short-but-bittersweet Gogol original are several colorful new characters, including a publicity-hungry small-town mayor, played by Giulio Stival.” This film was the winner of the Golden Palm in Cannes and was Rascel’s breakthrough. The following year he directed himself in La passeggiata/The Walk (1953, Renato Pascel) with Valentina Cortese. But it was not a success and it would stay his only film direction. His most popular hits were the musicals by Garinei & Giovannini. According to Wikipedia, the artistic trio is responsible for the existence of the Musical in Italy with Attanasio cavallo vanesio/Attanasio, the vain horse (1952, Camillo Mastrocinque) featuring the American Peters Sisters, and Alvaro piuttosto corsaro/Alvaro, the little Pirate (1953, Camillo Mastrocinque), both also with Tina de Molo. The creative trio also made very popular stage musicals like Tobia la candida spia (Tobias the white light) (1955), Un paio d'ali (A Pair of Wings) (1957), Rascelinaria (1958), and Enrico '61 (1961), which was also performed for an entire year in London at the Piccadilly Theater in 1962. Rascel also played the leading role in the Italian film comedy Questi fantasmi/These Phantoms (1954, Eduardo De Filippo). He also had main roles in international productions like The Monte Carlo Story (1957, Sam Taylor) with Marlene Dietrich, Arrivederci Roma/Seven Hills of Rome (1957, Roy Rowland) with Mario Lanza, and The Secret of Santa Vittoria (1969, Stanley Kramer) with Anthony Quinn and Anna Magnani. 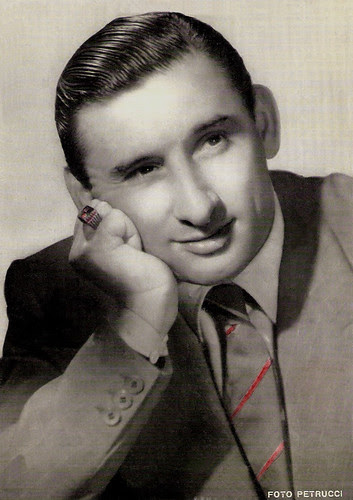 One Of The Most Famous Italian songs Of All Time
During his career, Renato Rascel established himself as a comic and dramatic actor, dancer, singer and songwriter. His most famous song Arrivederci Roma (1957) is among the three most famous Italian songs of all time. Among his other well-known songs are Venticello de Roma, Con un po' di fantasia, Vogliamoci tanto bene and Te voglio bene tanto tanto. RAI Television entrusted Rascel with the role of entertaining the country in the very first live Saturday night show. Among the most memorable are Rascel la nuit in 1956 and Stasera Rascel City in 1964. He represented Italy in the Eurovision Song Contest 1960 with the song Romantica. It was placed equal eighth out of thirteen entries. In I racconti di Padre Brown/Father Brown (1970, Vittorio Cottafavi), he interpreted a priest who solves crimes in his community. The TV series was one of the biggest television successes of the decade. In 1977, Rascel made his last camera appearance with a cameo in Jesus of Nazareth (1977, Franco Zeffirelli). Renato Rascel died in 1991 in Rome at the age of 78. He was married three times: to actress Tina De Mola (1943 – 1958; divorce), personal secretary Huguette Cartier (1966 - ?; divorce), and actress Giuditta Saltarini (1980 – 1991; his death). He is the father of composer Cesare Ranucci Rascel (1973).