English singer and actress Zena Dare (1887 – 1975) was famous for her charming, graceful and vivacious performances in Edwardian musicals and comedies in the first decade of the 20th century. Decades later she again enjoyed great success with her role as Mrs. Higgins in the long-running original London production of My Fair Lady. She also made several appearances on film and television. 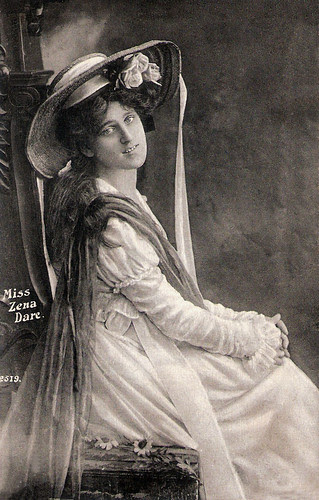 British postcard by The Rapid Photo Printing Co. London, no. 2519. 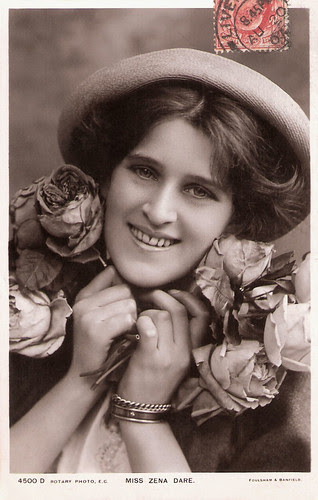 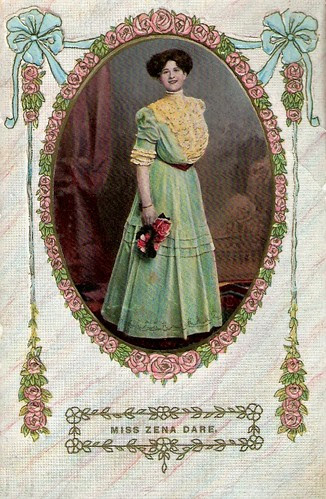 Remarkably Intelligent
Zena Dare was born Florence Hariette Zena Dones in London, in 1887. Her father, Arthur Albert Dones, was a divorce clerk, and his wife was Harriette Amelia Wheeler. Dare was the oldest of three children. Her sister, Phyllis, three and a half years her junior, would also become a well-known musical comedy actress. They had a brother named Jack. Zena was educated at Maida Vale high school. She had her first performance on stage at the age of 12, in the Christmas pantomime Babes in the Woods (1899) at the Coronet Theatre in London, where she performed under her real name Florence Dones. Phyllis was also cast in this production (Phyllis playing the girl babe, Zena as understudy to the boy babe), and they both adopted the stage name of Dare. However, Zena's mother insisted that she should continue her education for several more years in the intervals between further pantomime appearances. From 1900, Zena played in various pantomimes produced by F. Wyndham in Edinburgh and Glasgow. In 1902, the only 15-years-old Dare was hired by Seymour Hicks to tour as Daisy Maitland in An English Daisy, and to play the title role in Cinderella in the 1903-1904 season at the Shakespeare Theatre in Liverpool. In 1904 she played in Seymour Hick's The Catch of the Season (a retelling of the Cinderella fable) the part of Angela Crystal (Cinderella) at the Vaudeville Theatre. This was her first adult role. Hicks had originally designed this part for his wife Ellaline Terriss who had fallen pregnant. Zena successfully played the part until Mrs Hicks returned after having given birth. Zena's sister Phyllis later took over from Terriss to complete the run of 621 performances. Seymour Hicks said of Zena: "She was remarkably intelligent, worked hard and had a beautiful face, (…) and her performance was a charming one, which not only helped us out of our extremely difficult position but spelt her name in golden letters of success." 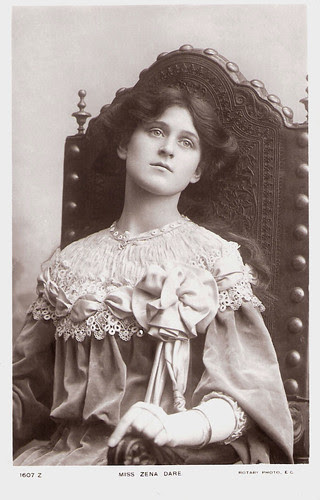 At the Top her Glittering Career
In 1905, Zena Dare was hired by producer George Edwardes to play three roles at The Prince of Wales's Theatre in London: the title role in Lady Madcap, Lady Elizabeth Congress in The Little Cherub and the title role in The Girl on Stage. Later that year, she re-appeared in The Catch of the Season. During the earlier run, she had met and subsequently become engaged to Maurice Vyner Baliol Brett, the second son of the second Viscount Esher. They married in January 1911, and, at the age of 23 and at the top of her glittering career, Dare retired from the theatre. She and her husband moved to rural Chilston, near Ascot, Berkshire, and raised a son and two daughters. During World War I, she nursed soldiers for three years at Mrs. Vanderbilt's American Hospital in Neuilly, France. According to Alan Courtney in his biography of Dare at Stage Beauty: "This harrowing experience left a lasting impression on Zena." In 1926, after fifteen years away from the stage, the then 39-years-old Dare played Mrs. Cheyney in The Last of Mrs. Cheyney. Courtney comments: "(She did this) without any big names supporting her and then toured with the production. This was some achievement as this was an exacting role for a late beginner to high comedy." In 1928, she played Kendall Frayne in The Second Man with Noel Coward at the Playhouse. Dare began her own theatre company in 1928 and toured South Africa in The High Road, The Trial of Mary Dugan, The Squeaker and Other Men's Wives. She returned from her tour at the end of 1929 and took over the management of the Haymarket Theatre, where she played Mrs. Fraser in The First Mrs. Fraser. In 1933, Dare began her long association with Ivor Novello, playing his mother in Proscenium at the Globe Theatre. In 1934, she played Mrs. Sherry in Novello’s Murder in Mayfair at the Theatre Royal. Her husband died that year. In 1936, she played Phyllida Frame in Novello's long-running musical Careless Rapture. With her wit, sophistication and talent for mild caricature, Dare was ideally suited to the Novello mix of frivolity and romantic sentiment. In 1938, she went on to play Tiny Fox-Coller in Farrell and Perry's Irish comedy, Spring Meeting, at the Ambassadors Theatre, which was directed by John Gielgud. She then toured in this role in 1939. 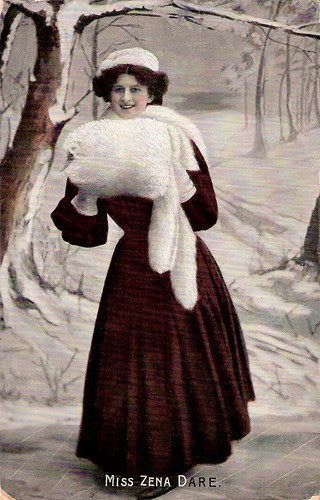 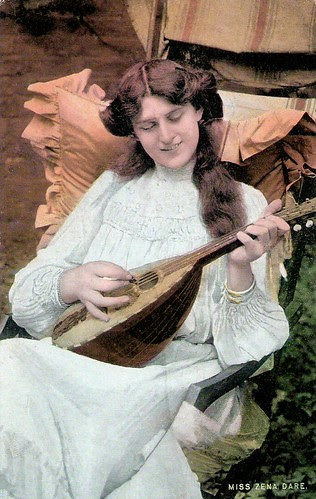 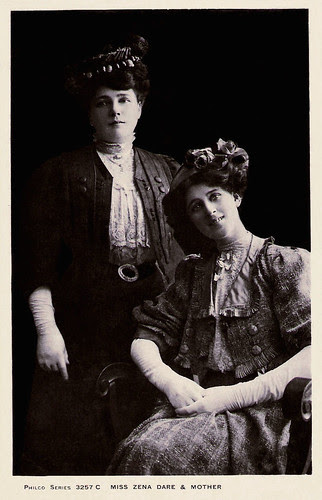 British postcard by The Philco Publishing Co. London, no. 3257 C. Sent by mail in Sunderland in 1909.

Mrs Higgins
In 1940, for the first time in over four decades, Zena and Phyllis Dare shared the stage in a tour of Ivor Novello's play Full House, in which Dare played Frynne Rodney. She rejoined Novello himself in 1945, taking over the part of Charlotte Fayre in Perchance to Dream. In 1949, she appeared as the royal mother in Novello's musical King's Rhapsody at the Palace Theatre, again with her sister Phyllis. The show ran for two years, surviving Novello's death. Zena Dare's last stage appearance was at Theatre Royal playing the part of Mrs Higgins, Rex Harrison's mother in the original production of My Fair Lady. It opened in the April of 1958 and ran for five and a half years. Dare was the only one of the principal performers to stay for the complete run, followed by a season on tour. At its conclusion in 1965, she retired from the stage. In addition to her stage career, Dare made several appearances on television and in films. Her filmography includes the silent films No. 5 John Street (1921, Kenelm Foss) with Mary Odette, and A Knight in London (1928, Lupu Pick) starring Lilian Harvey. She also appeared in a few sound films, such as the crime melodrama The Return of Carol Deane (1938, Arthur B. Woods) featuring Bebe Daniels, and Over the Moon (1939, Thornton Freeland) starring Rex Harrison and Merle Oberon. On television she played in Spring Meeting (1938, John Gielgud), the series Barbie (1955, Hazel Wilkinson), The Burning Glass (1956, Cyril Coke) and the Oscar Wilde adaptation An Ideal Husband (1969, Rudolph Cartier) with Margaret Leighton. In 1963, she was the special guest on an episode of BBC's This is your Life. She died in London in 1975 at the age of 88. Her sister Phyllis died just six weeks later. Zena Dare's career had spanned over six decades. In effect she had two careers, both successful, separated by 15 years.