Danish film actor and operetta singer Carl Brisson (1893 – 1958) appeared in 12 films between 1918 and 1935, including two silent films by Alfred Hitchcock. In the Paramount production Murder at the Vanities (1934), he introduced the popular song Cocktails for Two. 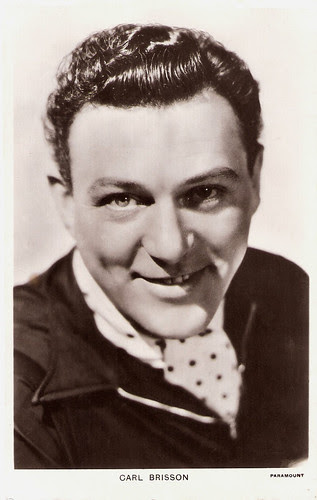 British postcard in the Picturegoer Series, London, no. 404b. Photo: Paramount. 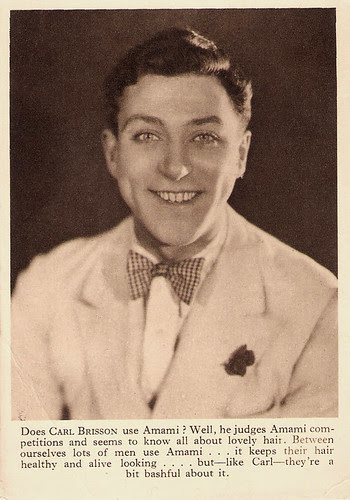 Hitchcock
Carl Brisson was born as Carl Frederik Ejnar Pedersen in Copenhagen, Denmark in 1893. He was the son of labourer Carl Pedersen and his wife Kirsten Madsdatter. He started his career as a milk boy in Copenhagen and was also a brewery worker. Between 1912 and 1915, he was a welter-weight prize-fighter. In 1915 he won Central Europe's amateur middle-weight boxing championship, and also married actress and cabaret singer Cleo Willard (pseudonym for Maria Laurenze Jorgensen), who would be his wife till his death. The next year, he also started a career as a travelling cabaret and operetta artist with appearances in cities like Copenhagen and Stockholm. He made his film debut credited as Carl Villard in the silent Nordisk production De mystiske fodspor/The mysterious footsteps (1918, A.W. Sandberg) opposite Else Frölich. The following year he moved to London. In 1923, he attracted attention at the West End when he appeared as Prince Danilo opposite Evelyn Laye in Ferenc Lehar's musical The Merry Widow at The Daly's Theatre. He appeared in the same role when it was revived at the Lyceum Theatre the following year. He would perform the role 780 times. In August 1924, he toured the provinces as Karl in Katja the Dancer, eventually returning to London to appear in The Apache at the London Palladium. In 1925, he acted in Oscar Straus, Julius Brammer, and Alfred Gruenwald's musical, Cleopatra, again with Evelyn Laye at the Daly's Theatre. He made his British screen debut in The Ring (1927, Alfred Hitchcock). Brisson starred as a boxer in this love triangle between two boxers (Brisson and Ian Hunter) and a woman (Lilian Hall-Davis). The Ring is widely considered a minor work of Alfred Hitchcock, but it does feature photography tricks he would use again years later in films like The Man Who Knew Too Much, most notably during the climactic boxing sequences. Two years later Brisson again appeared for Hitchcock in The Manxman (1929, Alfred Hitchcock) with Anny Ondra. It was another drama focusing on a love triangle, filmed almost entirely in the small fishing village of Polperro in Cornwall. It was the last silent film for Hitchcock. Brisson made another silent film in Sweden, Hjärtats triumph/The Triumph of the Heart (1929, Gustaf Molander) with Lissi Arna. 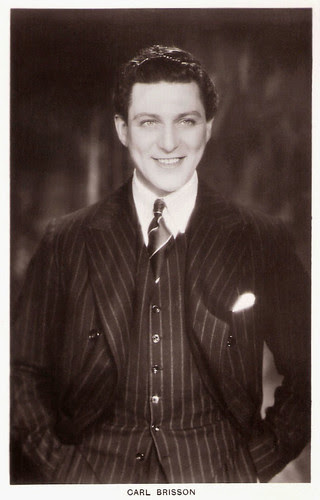 British postcard in the Picturegoer Series, London, no. 404. 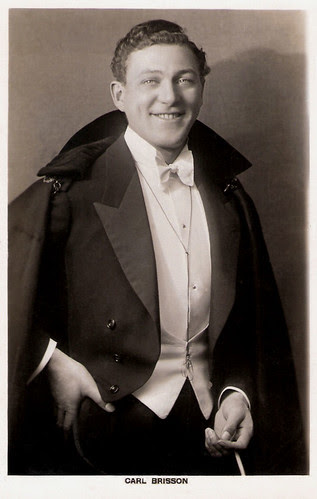 Nightclub Entertainer
Carl Brisson made a smooth transition to sound film. He co-starred with Madeleine Carroll in the British drama The American Prisoner (1929, Thomas Bentley). Other early sound films were the romantic comedy Knowing Men (1930, Elinor Glyn) with Elissa Landi, and the musical Song of Soho (1930, Harry Lachman). He used his full, rich tenor voice in the British musicals Prince of Arcadia (1933, Hanns Schwarz) with Ida Lupino in her film debut, and Two Hearts in Waltz Time (1934, Carmine Gallone, Joe May). In the latter, he played a composer who falls in love with the star of an opera company. Brisson went to Hollywood and starred for Paramount in the musical comedy All the Kings Horses (1934, Frank Tuttle) with Mary Ellis. It tells the story of a film actor who changes places with a Ruritanian prince. The film was nominated for the Oscar for Best Dance Direction. In this film, he launched the song A Little White Gardenia which became his signature tune in the further course of his career as a performing entertainer in the leading American nightclubs. In his next film Murder at the Vanities (1934, Mitchell Leisen), he co-starred with Victor McLaglen and Jack Oakie. In this musical he introduced the popular song Cocktails for Two. Another song is Sweet Marijuana (sung by Gertrud Lawrence), which got past the censors because at the time the film was made, the drug was not illegal. Today, most prints omit this production number all together. This hilarious and suggestive musical was just released before the Production Code cracked down in July 1934. Brisson then starred in the Paramount musical Ship Cafe (1935, Robert Florey) opposite Arlene Judge and Mady Christians. It was his last film. At IMDb, Malcomgsw explains why: ”I had not realised until I read his biography on IMDb that Brisson was a former boxer. This explains his performance which is so wooden one could imagine that he was a permanent fixture on the Ship featured in this film. Given that this was his last film clearly he must have outstayed his welcome at Paramount. This film is a long step down from his previous Murder At The Vanities. Given that his best point was his voice it is slightly surprising that he does relatively little vocalising in this film. Further what he does sing is instantly forgettable.” The next year, Brisson appeared on Broadway in the musical comedy Forbidden Melody, directed by Macklin Megley in the New Amsterdam Theatre. There were only 32 performances and it would be his only Broadway appearance. Since then on he focused on appearances on radio and in cabarets. From 1942 on, he appeared with a one-man show in hotels and clubs in the United States, and later also in Europe. In 1951, by the construction of the Philharmonic Auditorium in Los Angeles, he retook his old success role as Count Danilo in The Merry Widow. From 1955 on, he had his regular TV show in New York. He was the father of theatrical producer Frederick Brisson and father-in-law of Frederick's wife, actress Rosalind Russell. Carl Brisson died of jaundice in 1958 at the Palads Hotel in Copenhagen. 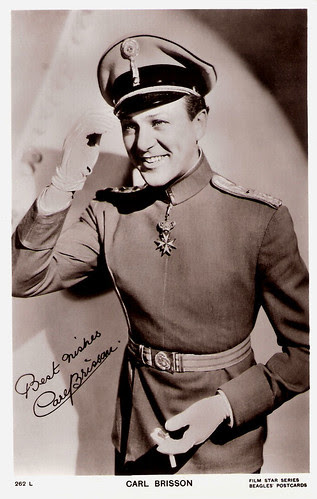 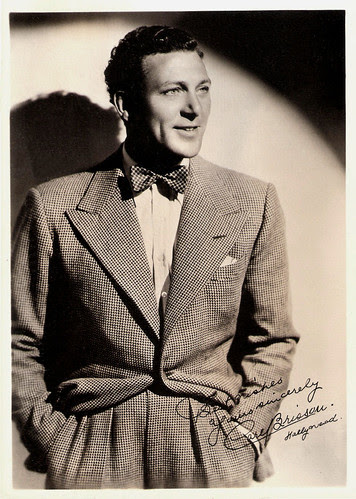