Dorothy Dickson (1893 - 1995) was an American-born London theater star. She also appeared in silent and sound films in Hollywood, France and Great-Britain 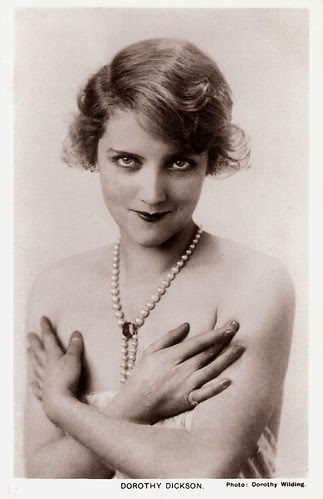 Heading East
Dorothy Dickson was born in Kansas City, Missouri, USA in 1893. In 1919 she made her film debut in the silent Fox production Eastward Ho! (1919, Emmett J. Flynn). Her first leading part was in Paying the Piper (1921, George Fitzmaurice). More film roles followed in silent Hollywood movies like The Silver Lining (1921, Roland West) and Headin' North (1921, Charles Bartlett). Dickson herself headed east to Europe. In Britain, she popularized the song Look for the Silver Lining, when she introduced it in London in 1921 in the Jerome Kern musical Sally. She stayed in London and starred in another Kern musical The Cabaret Girl (1922). 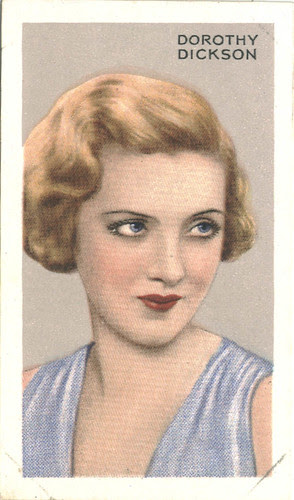 Ziegfield Follies
In 1930 Dorothy Dickson appeared in the French film La route est belle/The road is fine (1930, Robert Florey) with André Baugé, which was filmed in the British Elstree studio. She played in British films like Channel Crossing (1933) with Matheson Lang, and Sword of Honour (1939) starring Sally Gray. She also appeared on the New York stage and in the Ziegfield Follies before World War II. During the war, she was one of the leading figures behind the Stage Door Canteen, a popular London club frequented by Allied troops. In the 1950's, she appeared on the London stage with Fay Compton in Red Letter Day and opposite Jack Buchanan in As Long As They're Happy Her last stage appearance was in 1980 at a gala performance at the Duke of York's Theater to commemorate 75 years of Peter Pan, in which she had performed a half-century earlier. She also maintained a friendship with Queen Elizabeth, the Queen Mother, dating from the 1920's until the Queen Mother's death at age 102. Her daughter was the actress Dorothy Hyson, who was married to Sir Anthony Quayle. Dorothy Hyson Quayle died, aged 81, one year after her mother's death in 1995 at age 102.


Dorothy Dickson sings Wheres that rainbow with the guilt edged four. The second of two rare records from Peggy Ann (1927) by Rogers and Hart in London at Dalys Theatre. Source: Robgems2 (YouTube).