We start 2013 with an extra long post on Brigitte Bardot (1934), the sex kitten of the European cinema. Prrrrr. During the 1950's and 1960's, she was every man's idea of the girl he'd like to meet in Paris. She starred in 48 films, performed in numerous musical shows, and recorded 80 songs. After her retirement in 1973, BB established herself as an animal rights activist. 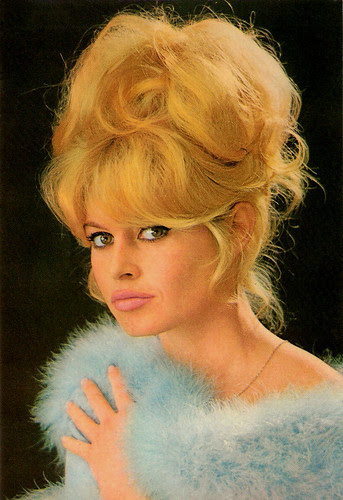 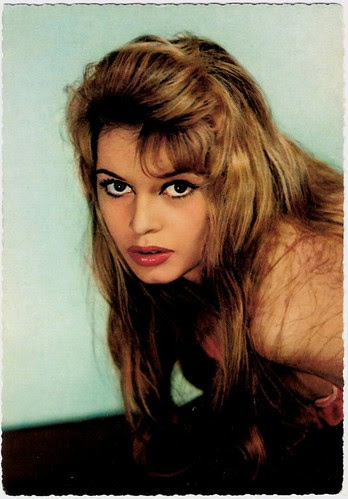 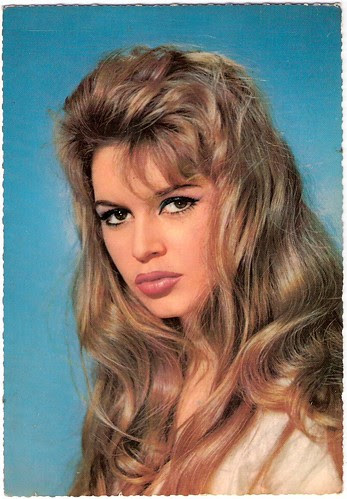 Massive Media Attention
Brigitte Bardot was born in Paris in 1934. Her father, Louis Bardot, had an engineering degree and worked with his father in the family business. Her mother, Ann-Marie Mucel, was 14 years younger than Brigitte's father and they married in 1933. Brigitte's mother encouraged her daughter to take up music and dance. At the age of 13 she entered the Conservatoire Nationale de Danse to study ballet. By the time she was 15, Brigitte was trying a modeling career, and found herself in May 1949 on the cover of French magazine Elle. Her incredible beauty readily apparent, Brigitte was noticed by Roger Vadim, then an assistant to the film director Marc Allegrét. Vadim was infatuated with Bardot and encouraged her to start working as a film actress. BB was 18 when she debuted in the comedy Le Trou Normand/Crazy for Love (1952, Jean Boyer). In the same year she married Vadim. Brigitte wanted to marry him when she was 17, but her parents quashed any marriage plans until she turned 18. In April 1953 she attended the Cannes Film Festival where she received massive media attention. She soon was every man's idea of the girl he'd like to meet in Paris. From 1952 to 1956 she appeared in seventeen films. Her films were generally lightweight romantic dramas in which she was cast as ingénue or siren, often with an element of undress. She made her first US production in 1953 in Un acte d'amour/Act of Love (1953, Anatole Litvak) with Kirk Douglas, but she continued to make films in France. 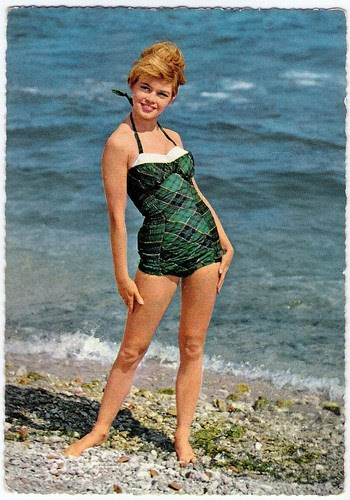 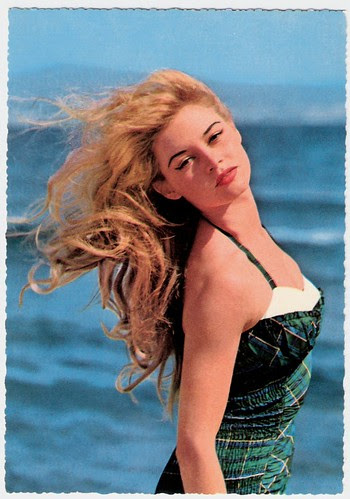 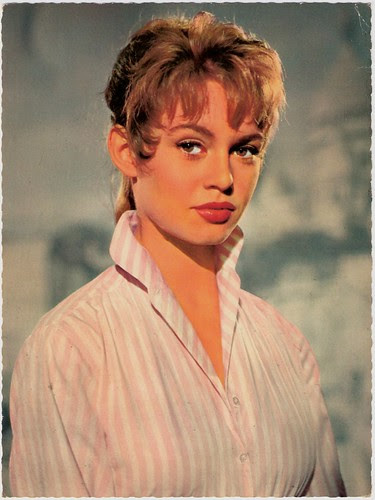 Immoral Teenager
Roger Vadim was not content with the light fare his wife was offered. He felt Brigitte Bardot was being undersold. Looking for something more like an art film to push her as a serious actress, he showcased her in Et Dieu créa la femme/...And God Created Woman (1956, Roger Vadim). This film, about an immoral teenager in a respectable small-town setting, was a smash success on both sides of the Atlantic. Craig Butler at AllMovie: "It's easy enough to say that ...And God Created Woman is much more important for its historical significance than for its actual quality as a film, and that's true to an extent. Woman's immense popularity, due to its willingness to directly embrace an exploration of sex as well as its willingness to show a degree of nudity that was remarkably daring for its day, demonstrated that audiences were willing to view subject matter that was considered too racy for the average moviegoer. This had both positive (freedom to explore, especially for the French filmmakers of the time) and negative (freedom to exploit) consequences, but its impact is undeniable. It's also true that Woman is not a great work of art, not with a story that is ultimately rather thin, some painful dialogue, and an attitude toward its characters and their sexuality that is unclear and inconsistent. Yet Woman is still fascinating, due in no small part to the presence of Brigitte Bardot in the role that made her an international star and sex symbol. She's not demonstrating great acting here, although her performance is actually good and much better than necessary, and her legendary mambo scene at the climax is nothing short of sensational." During the shooting of Et Dieu créa la femme/And God Created Woman (1956), directed by her husband Roger Vadim, Brigitte Bardot had an affair with her co-star Jean-Louis Trintignant, who at that time was married to French actress Stéphane Audran. Her divorce from Vadim followed, but they remained friends and collaborated in later work. 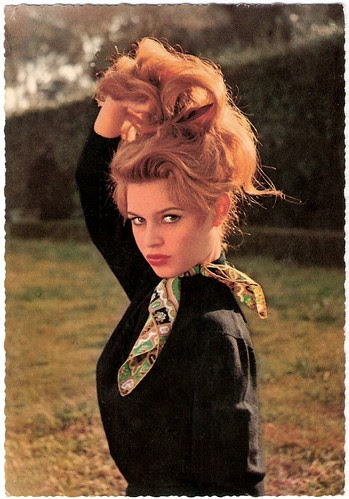 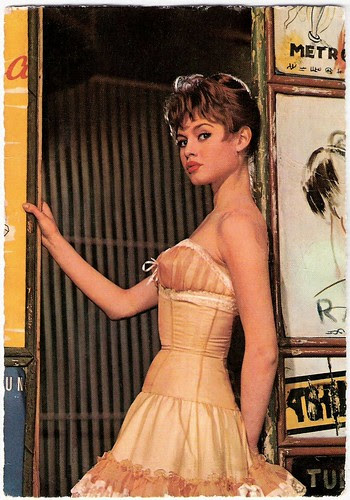 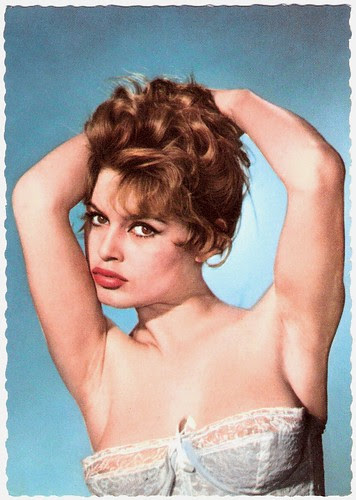 Sensuality and Slight Immorality
Et Dieu créa la femme/...And God Created Woman (1956, Roger Vadim) helped her international status. The film took the USA by storm, her explosive sexuality being unlike anything seen in the States since the days of the 'flapper' in the 1920's. It gave rise to the phrase 'sex kitten' and fascination of her in America consisted of magazines photographs and dubbed over French films - good, bad or indifferent, her films drew audiences - mainly men - into theaters like lemmings.BB appeared in light comedies like Doctor at Large (1957, ) - the third of the British 'Doctor' series starring Dirk Bogarde - and Une Parisienne/La Parisienne (1957, Michel Boisrond) which suited her acting skills best. However, she was a sensation in the crime drama En cas de malheur/Love is my profession (1958, Claude Autant-Lara). Hal Erickson at AllMovie: "this Brigitte Bardot vehicle ran into stiff opposition from the Catholic Legion of Decency, severely limiting its U.S. distribution. Bardot plays a nubile small-time thief named Yvette, who becomes the mistress of influential defense attorney Andre (Jean Gabin). Though Andre is able to shower Yvette with jewels and furs, he cannot "buy" her heart, and thus it is that it belongs to handsome young student Mazzetti (Franco Interlenghi). Alas, Yvette is no judge of human nature: attractive though Mazzetti can be, he has a dangerous-and deadly-side. En Cas de Malheur contains a nude scene that has since been reprinted in freeze-frame form innumerable times by both film-history books and girlie magazines." Photographer Sam Lévin's photos contributed considerably to her image of sensuality and slight immorality. One of Lévin's pictures shows Brigitte, dressed in a white corset. It is said that around 1960 postcards with this photograph outsold in Paris those of the Eiffel Tower. 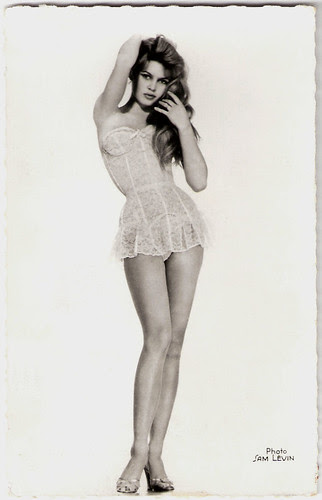 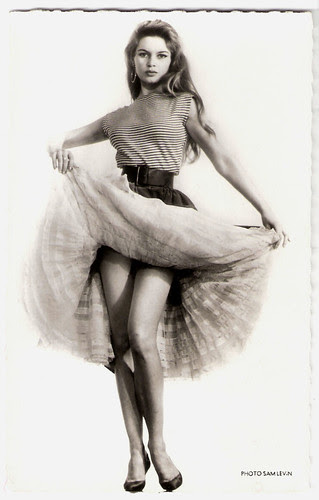 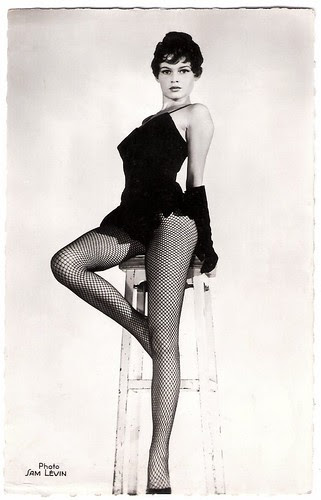 Preying Paparazzi
Brigitte Bardot divorced Vadim in 1957 and in 1959 she married actor Jacques Charrier, with whom she starred in Babette s'en va-t-en guerre/Babette Goes to War (1959, Christian-Jaque). The paparazzi preyed upon her marriage, while she and her husband clashed over the direction of her career. Her films became more substantial, but this brought a heavy pressure of dual celebrity as she sought critical acclaim while remaining a glamour model for most of the world. Vie privée/Private Life (1962), directed by Louis Malle has more than an element of autobiography in it. James Travers at Films de France: "Brigitte Bardot hadn’t quite reached the highpoint of her career when she agreed to make this film with high profile New Wave film director Louis Malle. Even so, the pressure of being a living icon was obviously beginning to get to France’s sex goddess and Vie privée is as much an attempt by Bardot to come to terms with her celebrity as anything else. Malle is clearly fascinated by Bardot and the documentary approach he adopts for this film reinforces the impression that it is more a biography of the actress than a work of fiction. Of course it’s not entirely biographical, but the story is remarkably close to Bardot’s own life and comes pretty close to predicting how her career would end." The scene in which, returning to her apartment, Bardot's character is harangued in the elevator by a middle-aged cleaning lady calling her offensive names, was based on an actual incident, and is a resonant image of celebrity in the mid-20th century. Soon afterwards Bardot withdrew to the seclusion of Southern France. 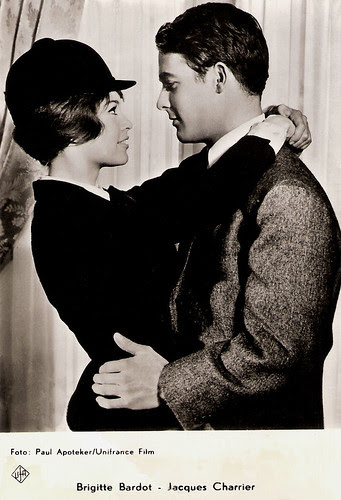 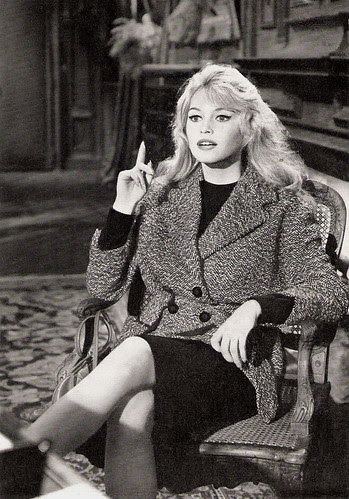 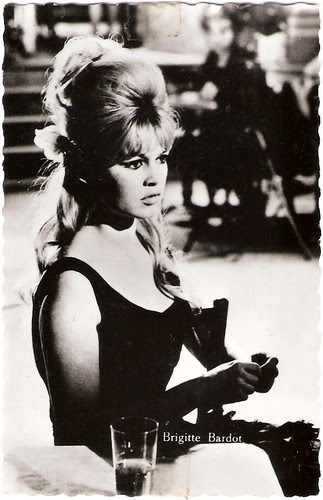 Harley Davidson
Brigitte Bardot's other husbands were German millionaire playboy Gunter Sachs and right-wing politician Bernard d'Ormale. She is reputed to have had relationships with many other men including Sami Frey, her co-star in La Vérité/The Truth (1960, Henri-Georges Clouzot), and musicians Serge Gainsbourg and Sacha Distel. In 1963, Brigitte Bardot starred in Godard's critically acclaimed film Le Mépris/Contempt (1963, Jean-Luc Godard). She was also featured along with such notable actors as Alain Delon in Amours célèbres/Famous Love Affairs (1961, Michel Boisrond) and Histoires extraordinaires/Tales of Mystery (1968, Louis Malle), Jeanne Moreau in Viva Maria! (1965, Louis Malle), Sean Connery in Shalako (1968, Edward Dmytryk), and Claudia Cardinale in Les Pétroleuses/Petroleum Girls (1971, Christian-Jaque). She participated in various musical shows and recorded many popular songs in the 1960’s and 1970’s, mostly in collaboration with Serge Gainsbourg, Bob Zagury and Sacha Distel, including Harley Davidson, Le Soleil De Ma Vie (the cover of Stevie Wonder's You Are the Sunshine of My Life) and notorious Je t'aime... moi non plus. 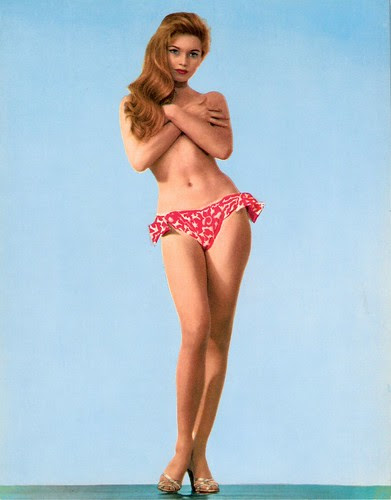 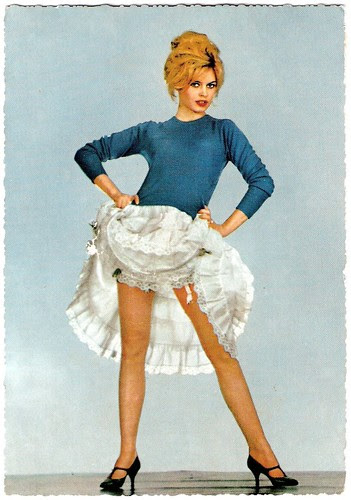 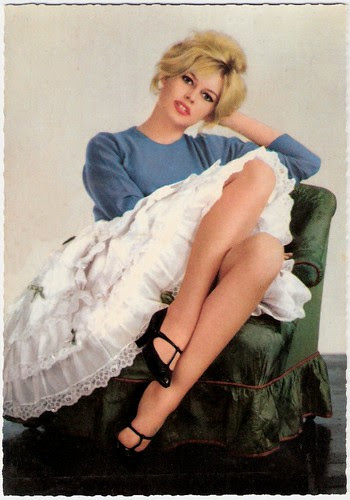 Racial Hatred
Brigitte Bardot’s film career showed a steady decline in the late 1960's and early 1970's. In 1973 just before her fortieth birthday, she announced her retirement. She chose to use her fame to promote animal rights. In 1976 she established the Brigitte Bardot Foundation for the Welfare and Protection of Animals. She became a vegetarian and raised three million French francs to fund the foundation by auctioning off jewelry and many personal belongings. For this work, she was awarded the Légion d’honneur in 1984. During the 1990's she became also outspoken in her criticism of immigration, interracial relationships, Islam in France and homosexuality. Her husband Bernard d'Ormal is a former adviser of the far right Front National party. Bardot has been convicted five times for 'inciting racial hatred'. More fun is that Bardot is recognised for popularizing bikini swimwear, in such early films such Manina/Woman without a Veil (1952), in her appearances at Cannes and in many photo shoots. Bardot also brought into fashion the choucroute ('Sauerkraut') hairstyle (a sort of beehive hair style) and gingham clothes after wearing a checkered pink dress, designed by Jacques Esterel, at her wedding to Charrier. The fashions of the 1960's looked effortlessly right and spontaneous on her. Time Magazine: "She is the princess of pout, the countess of come hither. Brigitte Bardot exuded a carefree, naïve sexuality that brought a whole new audience to French films." 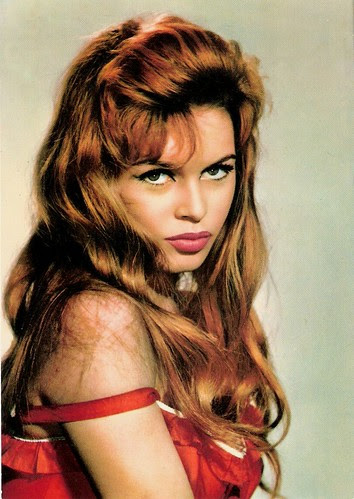 Italian postcard by Rotalcolor, Milano, no. 45. 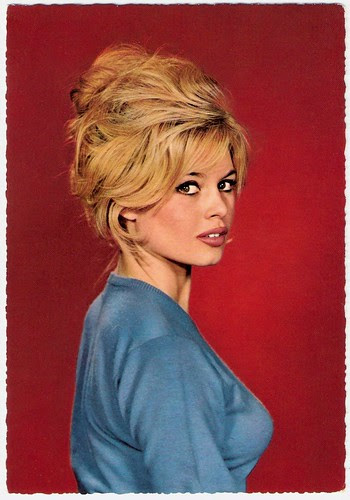 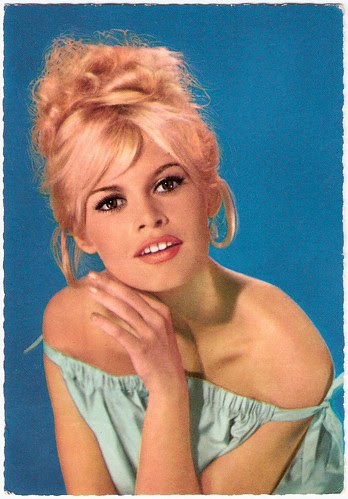 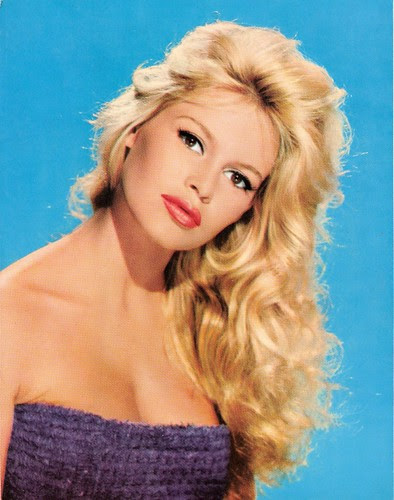 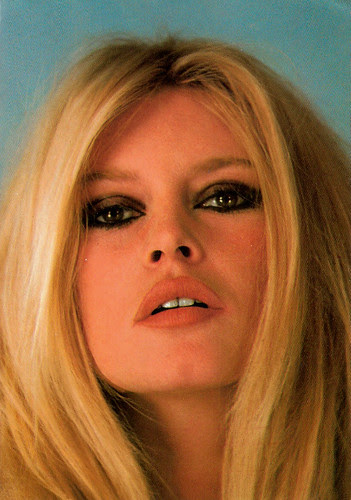 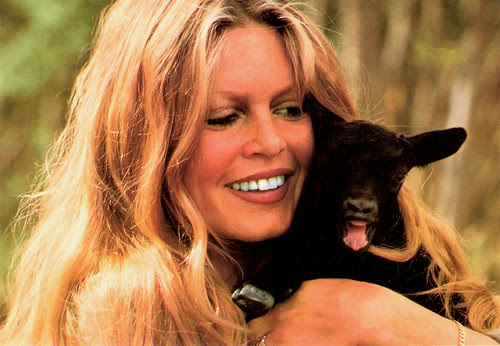 I have always adored Brigitte Bordot. She has been a favorite of mine for years. Thank you so much for sharing all this information about her life. I learned things I did not know.

A European film star that I am actually familiar with! She is lovely!

She really is incredibly sexy and beautiful. Can't wait for Part II!

It's interesting to see her early photos. Nowadays they look relatively innocent.

I think she's the first film star you have had on your blog that I had heard of before. I don't even know much about U. S. stars.

Great film clip! Va va voom! I knew she was the epitome of the sex kitten, but didn't see her films (I was a kid when they came out, but her fame was widespread, as you know). Interesting to see her full lips, accomplished by nature, not botox. Look forward to seeing next week's entry.

Thanks for all your wonderful comments. This month I'm very busy privately, so it's sometimes hard to join you in the blog fun and visit your fabulous blogs. I'll be a better boy next month!

A great way to start the year!