Sophisticated German actress Brigitte Helm (1906-1996) is a legend because of her dual role as the noble Maria and as her evil double, the hypersexed robot Maria in Metropolis (Fritz Lang, 1927). After her debut in this silent science-fiction classic, she starred in over 30 films in which she often portrayed a cool, unobtainable vamp. Helm easily made the transition to sound film, but in 1935 she suddenly retired. 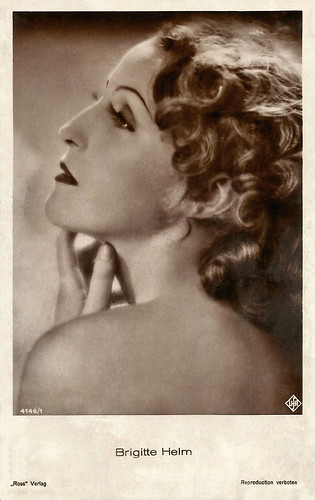 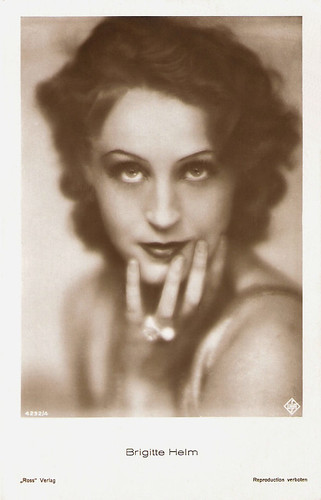 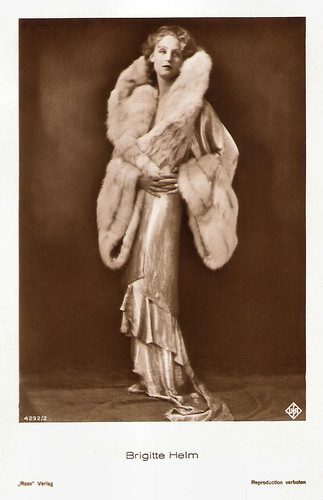 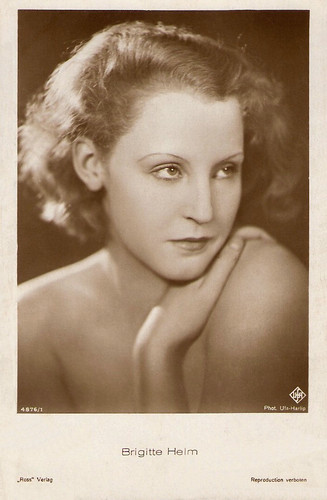 Metropolis
Brigitte Helm was born as Brigitte Eva Gisela Schittenhelm in Berlin, Germany, in 1906 (some sources say 1908). Her father was a Prussian army officer, who left his wife a widow not long after. Brigitte gained her acting experience in school productions, but never thought of acting classes. After her  school exams, she wanted to be an astronomer. But then she was discovered by the famous director Fritz Lang for the lead in Metropolis (1927, Fritz Lang), then the most expensive German film ever made. Her mother had send a photograph of her beautiful 16-years-old daughter to Lang's wife, scriptwriter Thea von Harbou. Helm was invited to the set of Die Nibelungen, and was given a screen test. She got the double role of the noble and virginal Maria and her evil and sensual twin, the Maschinenmensch, a robot created to urge the workers in revolting and destroying their own city. In their 1996 obituary in The New York Times, Robert McThomas and Peter Herzog note: "The film depicts the world of 2006, a time, Lang envisioned, when a ruling class lives in decadent luxury in the loft heights of skyscrapers linked by aerial railways, while beneath the streets slave like workers toll in unbearable conditions to sustain their masters. But for all the steam and special effects, for many who have seen the movie in it various incarnations, including a tinted version and one accompanied by music, the most compelling lingering image is neither the towers above nor the hellish factories below. It is the staring transformation of Ms. Helm from an idealistic young woman into a barely clad creature performing a lascivious dance in a brothel." Metropolis made Brigitte Helm a star overnight. 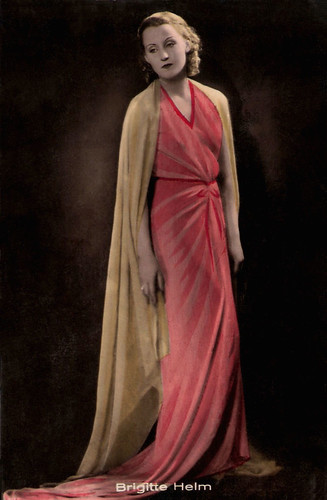 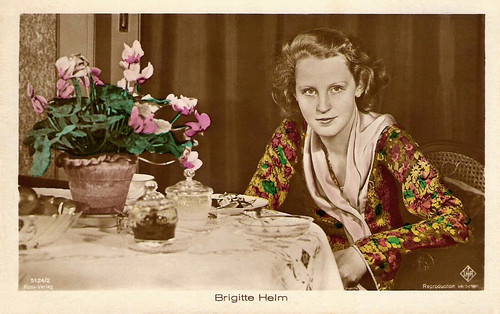 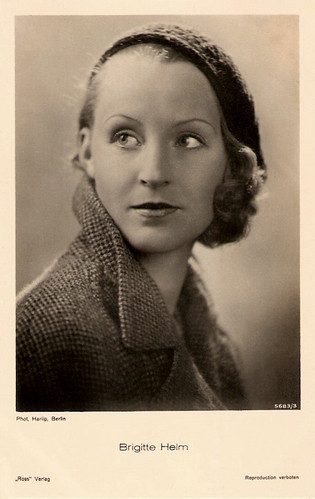 Ice Queen
UFA gave Brigitte Helm a contract, and over the next 10 years she acted in 29 German, French and English films. She was cast as the evil but oh so seductive protagonist in the sci-fi-horror film Alraune. First in the silent version of 1928, directed by Henrik Galeen.  Hal Erickson at AllMovie: "Hanns Heinz Ewers' grim science-fiction novel Alraune has already been filmed twice when this version was assembled in 1928. In another of his 'mad doctor' roles, Paul Wegener plays Professor Brinken, sociopathic scientist who combines the genes of an executed murderer with those of a prostitute. The result is a beautiful young woman named Alraune (Brigitte Helm), who is incapable of feeling any real emotions - least of all guilt or regret. Upon attaining adulthood, Alraune sets about to seduce and destroy every male who crosses her path. Ultimately, Professor Brinken is hoist on his own petard when he falls hopelessly in love with Alraune himself." Two years later Helm also starred in the sound version, Alraune/A Daughter of Destiny (1930, Richard Oswald), for which the Dutch postcard lower in this post was made. 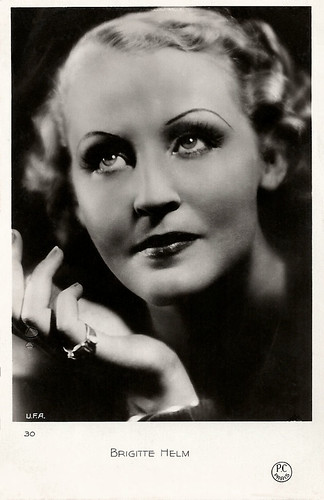 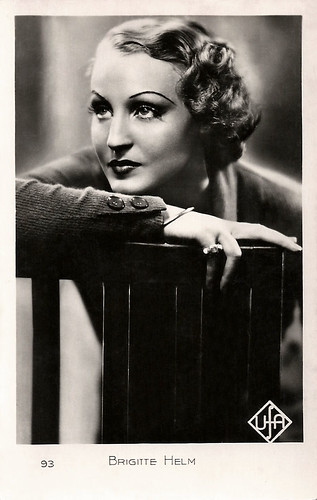 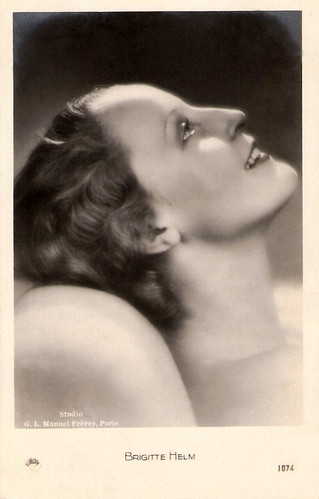 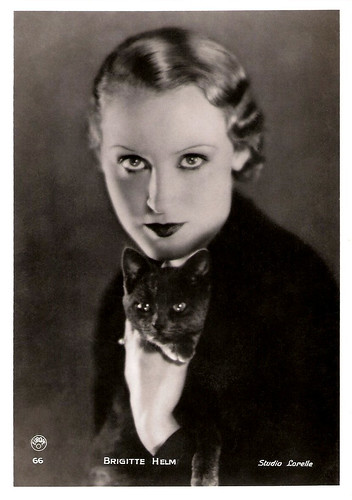 Mysterious Adaptability
Brigitte Helm played a helpless blind woman who is seduced by a rogue in the wartime melodrama Die Liebe der Jeanne Ney/The Love of Jeanne Ney (1927, G.W. Pabst). It was Brigitte Helm's first project with Georg Wilhelm Pabst, the director who could - better than any other director - bring out her mysterious adaptability. In his films Abwege/The Devious Path (1928) and L’Atlantide/Die Herrin von Atlantis/Queen of Atlantis (1932) she proved that she could perform more restrained and emotionally expressive characters. In Abwege, she portrays a spoilt woman of the world who from sheer boredom almost destroys her own life. In L'Atlantide (1932), Helm plays a goddess, the mere sight of whom makes men crazy. Werner Sudendorff wrote in his obituary of Helm in The Independent:  "Her power is not of this world, but incomprehensible, magical. This was Helm's last really great role, a legendary mysterious sphinx of the German cinema."These films and Marcel L'Herbier's late silent film L'Argent/The Money (1928, Marcel L’ Herbier) allowed Helm to act outside the tired cliches she was later often subjected to by script writers and producers. 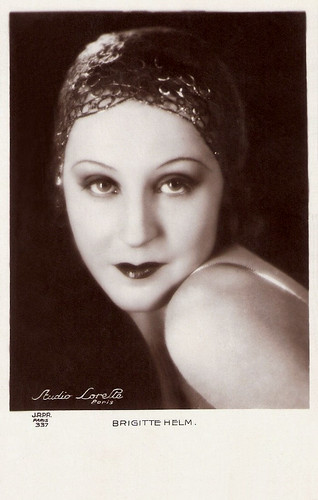 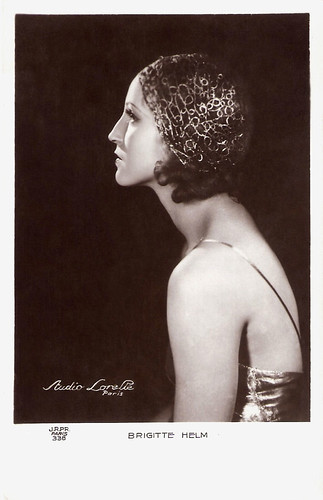 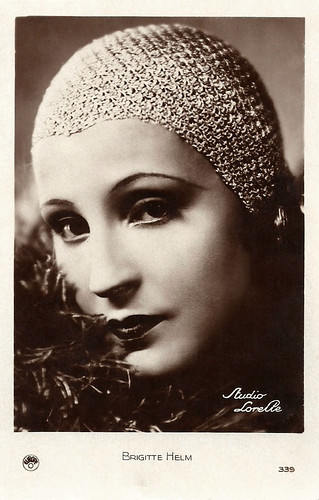 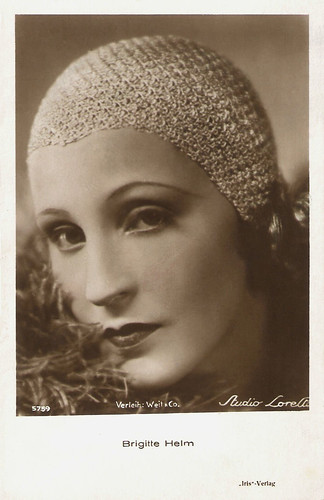 Restricting Clauses
Brigitte Helm's first sound film was the musical Die singende Stadt/City of Song (1930, Carmine Gallone) with Jan Kiepura. She also appeared in the French and English versions of her German films. Werner Sudendorff: "In her films of the early 1930s Brigitte Helm became the embodiment of the down-to earth, affluent modern woman. With her slim figure and austere pre-Raphaelite profile, she seems unapproachable, a model fashion-conscious woman, under whose ice-cold outer appearance criminal energies flicker." However, her sound films, like Gloria (1931, Hans Behrendt), The Blue Danube (1932, Herbert Wilcox) and Gold/L’Or (1934, Karl Hartl), do not have the artistic cachet of her best silent films. Her relationship with the Ufa happened to be very rocky. While the studio had made her a star and kept increasing her pay, the actress was unhappy with the material the Ufa offered her and she was annoyed about the restrictive clauses dictating her weight. 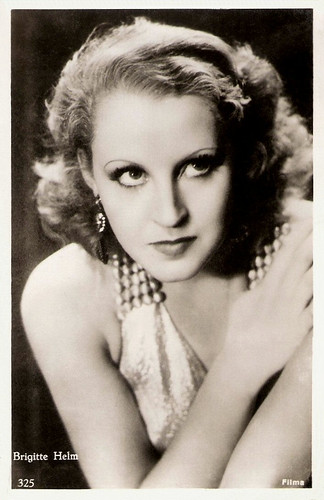 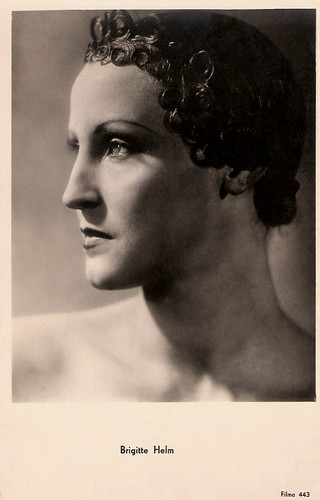 Dutch postcard by Filma, no. 443. Photo: publicity still for L’Atlantide/Queen of Atlantis (1932). 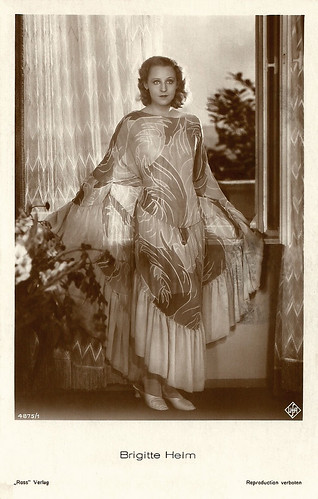 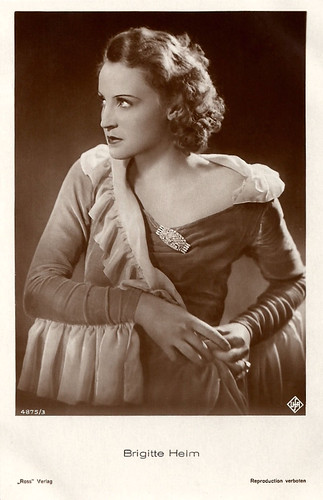 Blue Angel
Reportedly Brigitte Helm was Josef Von Sternberg's original choice for the starring role of Der Blaue Engel/The Blue Angel (1930), but the part went to Marlene Dietrich. Helm was also James Whale's first choice for his Bride of Frankenstein (1935), but reportedly she refused to go to America. In 1935, angered by the Nazi control of the German film industry, she didn’t extend her contract with the Ufa. Perhaps another reason for her decision were the negative press reports about her many traffic accidents and the short prison sentence as a result of it. Her last film was Ein Idealer Gatte/An Ideal Husband (1935, Herbert Selpin), an adaptation of the play by Oscar Wilde. 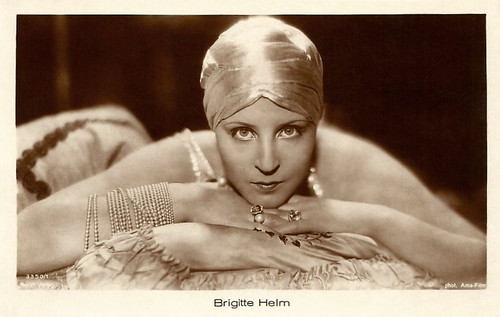 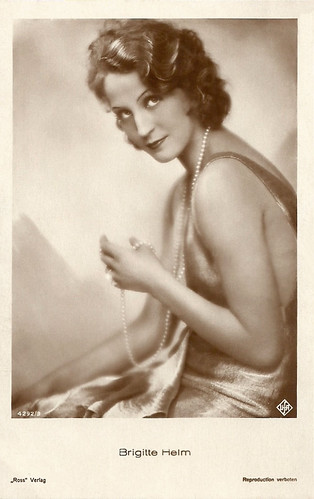 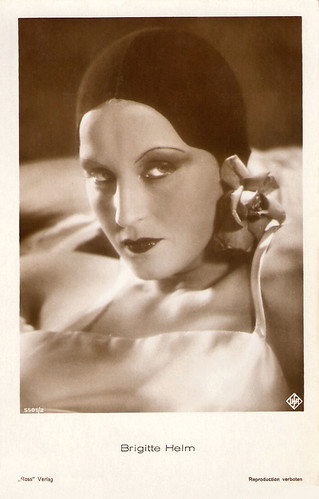 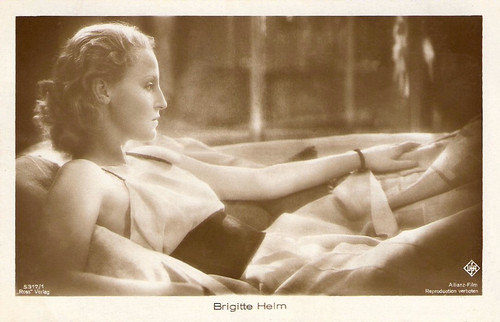 Timid, Modest and Not Very Ambitious
In private, Brigitte Helm was a timid, modest and not very ambitious personality. In 1935, after a short but prolific career of 32 films, she married Dr. Hugo Von Kunheim, a German industrialist of Jewish descent, and retired. Bruce Eder at AllMovie: "in addition to no longer needing to pursue her acting, with which she was never 100-percent comfortable, she was repelled by the takeover of the German movie industry by the Hitler government. Her marital status, coupled with her anti-Nazi political views, made it impossible for Helm to continue working in movies or living in Germany. From 1935 onward, the couple lived in Switzerland. After the war, they divided their time between Germany and Switzerland, but Helm chose to live quietly and remain anonymous." The pair would raise four children. In 1968 Helm received the Filmband in Gold for “continued outstanding individual contributions to German film over the years". She steadfastly refused to appear in a film again, nor even grant an interview about her film career, but she always answered requests from her old fans for her signature. Brigitte Helm died in 1996 in Ascona, Switzerland. In particular her Evil Maria won't be forgotten. Apt for her is the Mae West line: "When I am good, I am very good; but when I am bad, I am better."


The creation of the evil Maria in Metropolis (1927). Source: fadigaziri (YouTube).


Scene from Abwege (1928). Brigitte Helm (as Mrs. Irene Beck) is woken up by her friends from the party, where she was the day before. Source: Samotaaar (YouTube).

What an astounding number of looks, and a fantastic grouping of cards.

How beautiful she was... These are lovely postcards. Happy Valentines and a late Happy PFF!

Thanks for your comments. I liked your blogs and your appreciation of Brigitte Helm.

A wonderful pictorial Bob. I'm sure you've seen it, but I love this behind the scenes picture of Helm: