French comedian Jean Lefebvre (1919 – 2004) appeared in about 150 films, mainly in supporting roles. He is best known for the film comedies about the gendarme of Saint-Tropez, in which he co-starred with Louis de Funès. The public loved his big, black, mournful spaniel's eyes and nervous, slightly rat-like smile. 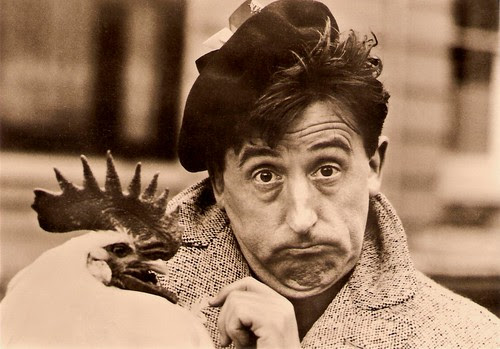 Too Big For His Body
Jean Marcel Lefebvre (sometimes Lefevre) was born in Valenciennes, in the North of France in 1919(some sources indicate he was born in 1922). He was the son of Georges Marcel Lefebvre and Zélia Louise Mathilde Masquelier. As a boy, Jean made his first film appearance as the son of Judex in Judex 34 (1933, Maurice Champreux, Roger de Trémeuse). After the war he was an extra in films like Un flic/A Cop (1947, Maurice de Canonge). He went to the conservatory in Paris in 1948. He won second prize at the Opéra Comique, where he studied for a while. But his subsequent drama teacher, René Simon, took him down a few pegs when he informed Lefebvre that his stage acting voice was too big for his body. The effect was unintentionally ludicrous, so he was advised to stick to light comedy. He made his stage debut in Vignes du Seigneur at the Cabaret Amiral, then played a small part in Robert Dhéry's first great success, La Plume de ma tante (The Pen of My Aunt), in the early fifties. He became a member of Dhéry’s company Les Branquignols. He was to appear in numerous plays and in more than a hundred films, some of them total flops. In French a flop is called a navet (turnip) which prompted him to remark that in his long career he had planted a whole field of turnips. But he also appeared in some memorable comedies. 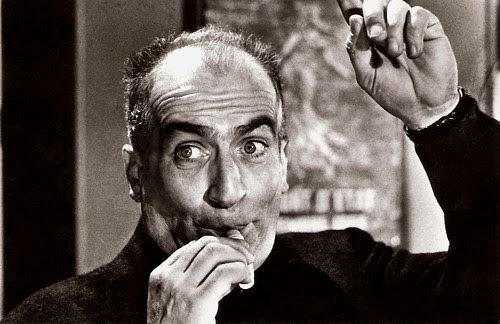 Les Gendarmes
Jean Lefebvre entered the film world in the early 1950’s and played some minor roles. In 1954 he appeared as a drunken sailor in Les Diaboliques/Diabolique (1954, Henri-Georges Clouzot) starring Simone Signoret. Two years later he appeared as René in Et Dieu... créa la femme/And Woman… Was Created (1956, Roger Vadim) with Brigitte Bardot, and again two years later in La Fille de Hamburg/The Girl From Hamburg (1958, Yves Allégret) with Daniel Gélin and Hildegard Knef. He also appeared in some comedies by his old buddy Robert Dhéry, La belle Américaine/The American Beauty (1961, Robert Dhéry, Pierre Tchernia) and Allez France!/Up the French! (1964, Robert Dhéry, Pierre Tchernia) with Diana Dors. He also appeared in the Hollywood production Gigot (1964, Gene Kelly), an Oscar nominated tribute to Charlie Chaplin and his film The Kid (1921) with Jackie Coogan. Among his other successful films of the 1960’s were the gangster comedy Les Tontons flingueurs/Crooks in Clover (1963, Georges Lautner), and Ne nous fâchons pas/Let’s Not get Angry (1966, Georges Lautner), both with Lino Ventura. Very popular was the comic series about the policemen of St. Tropez, starting with Le Gendarme de Saint-Tropez/The Gendarme of St. Tropez (1964, Jean Girault). In these hilarious farces he co-starred as the naïve Fougasse at the side of Louis de Funès and Michel Galabru. According to James Kirkup in The Independent, Lefebvre was called ‘le tendre pitre’ - the soft-hearted stooge. Audiences loved his randy adolescent's sidelong off-screen look of slightly panic-stricken bliss in the clutches of a statuesque but indulgently motherly hoofer. 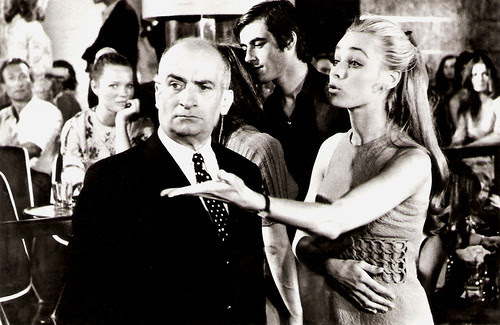 The Seventh Company
Jean Lefebvre appeared in the 1970’s in some international productions, such as Treasure Island (1972, John Hough) with Orson Welles. Among his most successful films of this decade were Le Magnifique/The Magnificent Secret Agent (1973, Philippe de Broca) starring Jean-Paul Belmondo, and Pas de problème!/No Problem (1975, Georges Lautner) with Miou-Miou. He also starred in the popular war comedies about the seventh company, On a retrouvé la 7eme compagnie !/The Seventh Company Has been Found (1975, Robert Lamoureux) and La 7ème compagnie au clair de lune/The Seventh Company Oudoors (1977, Robert Lamoureux). In the 1980’s he made far less films. He published a book, Pourquoi ça n'arrive qu'à moi? in 1984, in which he mentions as his birth date 1922 and not 1919. And in the following decades he mainly appeared on TV. In 1999, Lefebvre won 15 million French Francs (2.5 million euro) with the Lottery, and he opened a restaurant, La Bohème, in Marrakech, Morocco (some sources indicate that the fortune was won with gambling and not with the Lottery). Incidentally he appeared in films or on TV. His last film was Fifi Martingale (2001, Jacques Rozier). At the age of 84, Jean Lefebvre died in Marrakech in 2004. He was married four times (of which twice with the same wife): to Micheline Reine Grasser (1950-1962); Catherine Chassin-Briault, aka actress Yori Bertin (1967-1973 and 1974-1977); and finally in 1994, with Brigitte Jacqueline Françoise Lerebours. He had five children: Bernard, Catherine, Marie-Christine, Carole and Pascal.