Vaudeville star Anna Fougez (1894-1966) shone on the Italian stage from the First World War to the mid-1920s. Fougez became internationally noted for her performance of the Neapolitan song. The gorgeous dark-haired star also played in various Italian films. 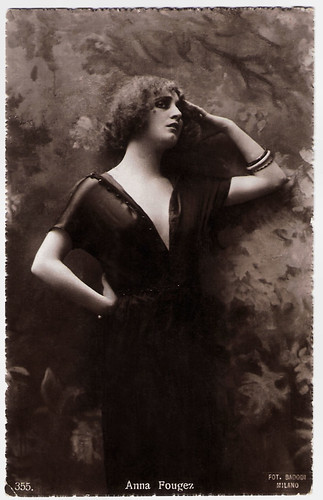 Italian postcard by A. Traldi, Milano, no. 355. Photo: Badodi, Milano. 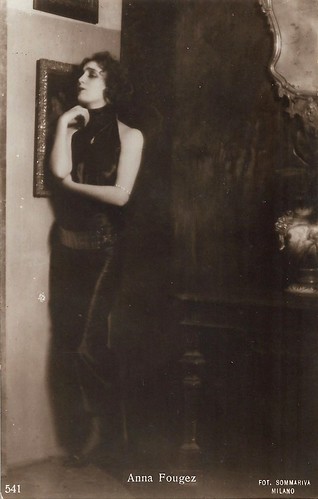 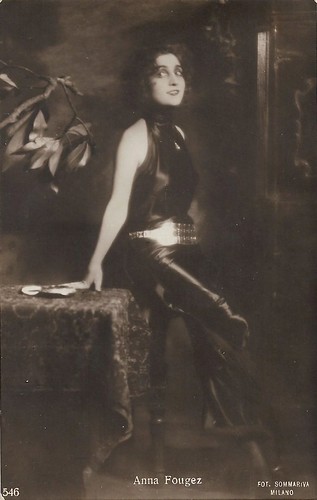 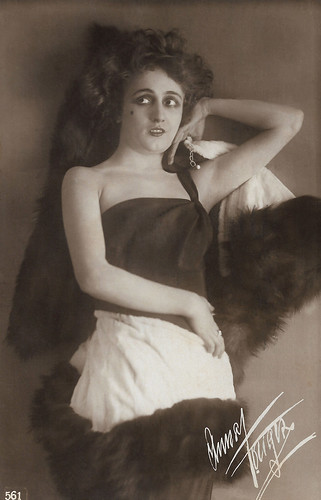 Rhinestones and a fake fox


Anna Fougez was born as Maria Annina Laganà Pappacena in Taranto, Southern Italy, in 1894. Her parents were Angelo and Teresa Catalano Pappacena.

Soon she became an orphan and she was adopted by Giuseppe Laganà and her aunt Giovannina Catalano. At the age of 8, she debuted on stage and when she was 15 she appeared as a couple with Petrolini.

When she was 16, she mended her torn socks with rhinestones, bought two hare bellies and wore them like they were foxes, and thus sang 'Bambola' at the Teatro Mastroieni in Messina.

Soon she had her name on the billboards next to the big names of the variety and cafe-chantant of those years such as Gino Franzi, Gennaro Pasquariello, Elvira Donnarumma, Armando Gill, and Gabrè.

Both in Italian theatres and on stages all over Europe, she became noted for her performance of Neapolitan songs. 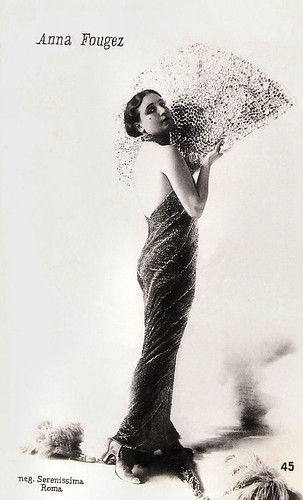 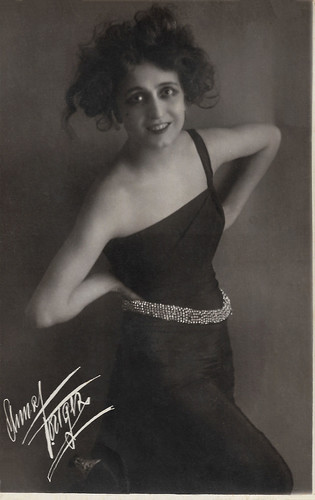 Italian postcard by Fotocelere, Torino, no. 135. 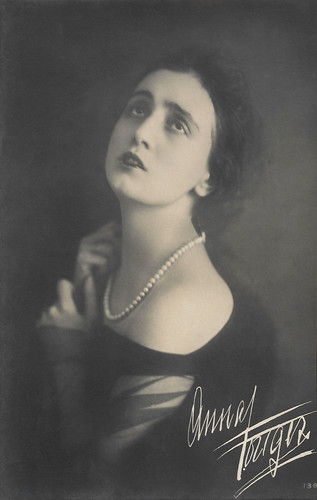 Italian postcard by Fotocelere, Torino, no. 136.

The epitome of luxury

Fougez was the most elegant of the Vaudeville stars: she got the first ostrich feathers, the first steps on stage, the first golden fountains. She wore priceless jewelry, a regal hairdo, and had beautiful naked legs.

She danced and sang after her own announcement: "Anna Fougez, signori, vi si presenta già per danzar... per cantar...", which became her trademark.

Fougez was the epitome of luxury, elegance and richness. Her nom de plume was inspired by the famous international vedette of the Folies Bergère, Eugénie Fougère.

Fougez was a talented artist whose name songs are attached like: 'Abat-jour' (Lamp-shades), 'Addio mia bella signora' (Farewell my lovely lady), and 'A tazza 'e cafè' (A Cup of Coffee). 'Vipera' (Viper) was her best-known song. 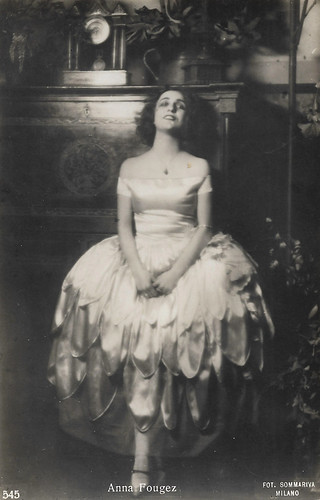 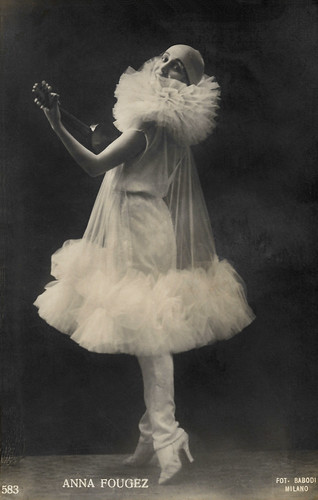 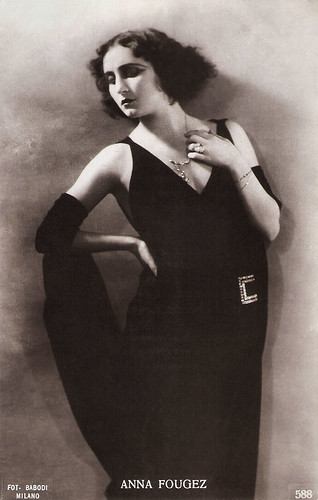 Imitations of Borelli and Menichelli


Anna Fougez also played in several films. In 1916 she made her cinema debut at the Cinès studio in the title role of Le avventure di Colette/The Adventures of Colette (R. Savarese, 1916), based on the comedy 'La gamine' by Pierre Veber and Henri de Gorsse.

Then in 1919, she starred in three films by Gustavo Serena, who also played the male lead: L'immagine dell'altra/The Image of the Other Woman (1919), L'ultima recita di Anna Parnell/The Last Performance of Anna Parnell (1919) with Rinaldo Rinaldi, based on a story by George Sand, and La vita e la leggenda/The Life and the Legend (1919), a modern version of the King Candaules story.

In 1921-1922 she again performed in films by and with Gustavo Serena. The first was Fiore selvaggio/Wild Flower (1921) for which she wrote the script herself. It is the story of a poor shepherdess climbing up the social ladder, becoming a rich demi-mondaine. In the end, she dies in the arms of her first love.

Then followed Senza colpa/Without Guilt (Gustavo Serena, 1921) for which the press accused her of imitating Lyda Borelli and Pina Menichelli, who were by now considered passé.

Finally, she appeared in Il fallo dell'istitutrice/The Mistake of the Teacher (Gustavo Serena, 1922), which received the same comments in the press. 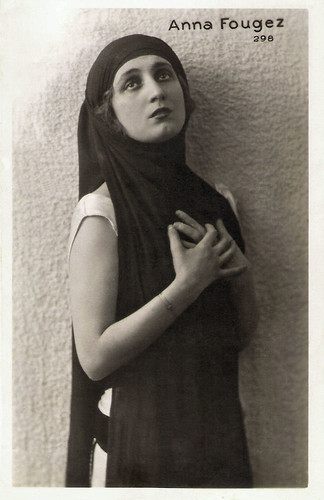 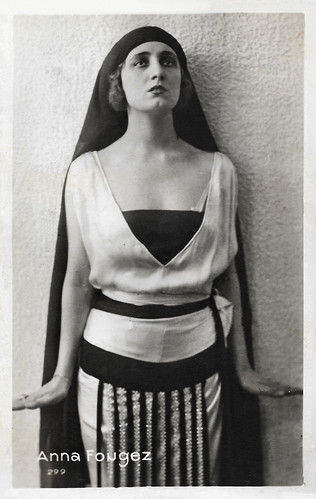 Italian postcard by Vettori, Bologna, no. 299. 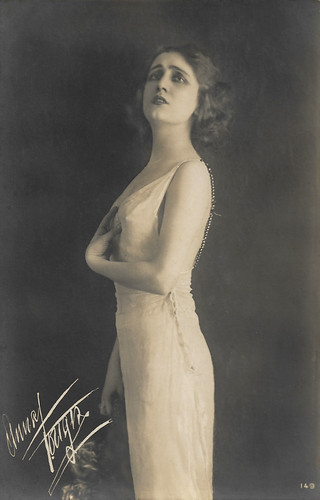 Italian postcard by Fotocelere, no. 149.


In 1928 Anna Fougez created a revue company together with her husband, the French dancer and tango specialist René Thano.

Two years later she published her autobiography 'Il mondo parla e io passo' (The world talks while I am passing). Actually, the title was a line borrowed from Lyda Borelli who used it in French: "La meute aboie, je passe." Fougez mingled memories about her career with her own poems.

In the 1930s she continued to perform with her Fougez-Thano company. Young talents such as Nino Taranto and Carlo Dapporto started their careers in these revue shows. Both the political and theatrical milieu were enamored by her.

In 1940 Anna Fougez retired in a villa full of souvenirs, in Santa Marinella, near Rome. There she kept living like a Grande Diva, together with René Thano, and her friends Amelia De Fazi and Annamaria De Fazi. 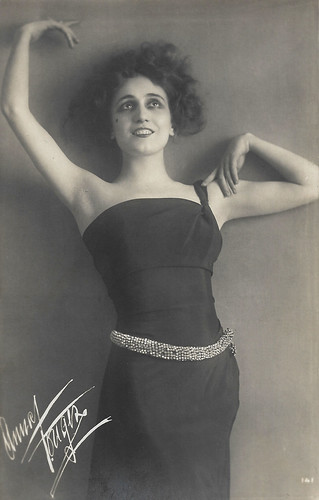 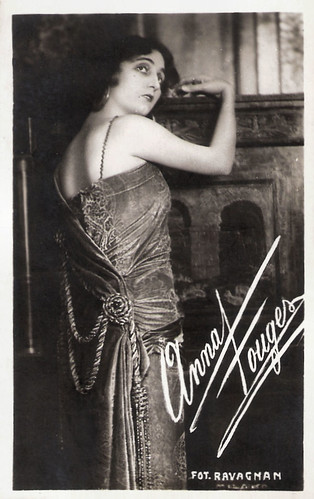