Il Cinema Ritrovato presents a restored version of Swedish director Mai Zetterling’s explosive Nattlek/Night Games (1966), based on her own novel, which at the time was banned from the Venice Film Festival. Mai Zetterling (1925-1994) was a talented and controversial director whose films focus on the role of women in society and show a fascination with outsiders, whether Eskimos, Gypsies, or girl delinquents. As an actress, she graced many European films of the 1940s and 1950s, with her slim figure, green eyes, blonde hair, and bewitchingly elfin features. 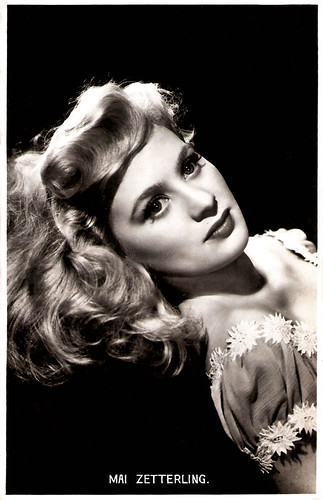 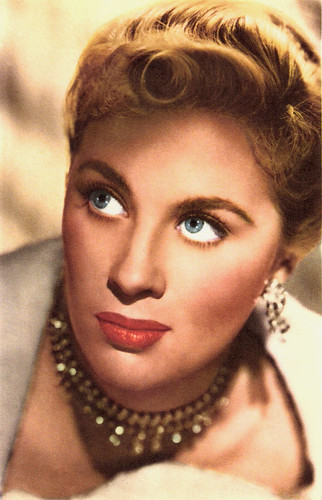 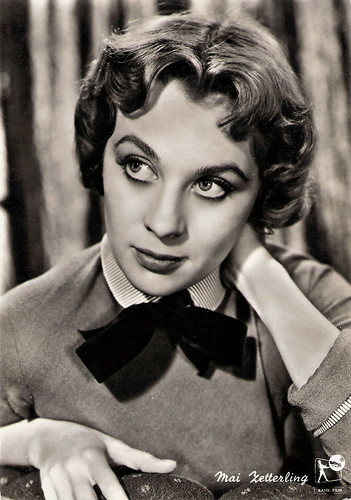 
Mai Elizabeth Zetterling was born in Västerås, Sweden, in 1925. She was illegitimate and found her father when she was about 24. She lived from 1929 till 1932 in Australia with her mother and stepfather in impoverished circumstances.

She only went to school until about 13 then left to be a shop assistant which wasn't good as she couldn't count. After working in a drug store and a mail-order company, she tried acting. She trained at the Kungliga Dramatiska Teatern, the Swedish Royal Dramatic Theater, where Alf Sjöberg became her mentor. At 16, she made her debut on both stage and screen.

Following her film debut in Lasse-Maja/Lasse Maja (Gunnar Olsson, 1941), she made quite an impact in the terminally dark Hets/Frenzy (1944), directed by her mentor Alf Sjöberg and written by Ingmar Bergman. Glenn Collins in his obituary in the New York Times writes that "her sensitive portrayal of a simple girl victimized by a sadistic professor (...) created a sensation and is now considered a landmark of the Swedish cinema."

Bergman went on to direct her in his Musik i mörker/Music in the Dark (Ingmar Bergman, 1948). The international attention she received from Hets led her to England where she debuted on London's West End in a revival of Henrik Ibsen's 'Wild Duck'.

Zetterling also played the title role of the film Frieda (Basil Dearden, 1947), about the problems of an RAF officer's German bride in dealing with postwar prejudice in his hometown. This led to a successful British film career with the J. Arthur Rank Organisation. For Rank, she played decorative roles in a segment of Quartet (Ralph Smart, 1948) and The Romantic Age (Edmond T. Gréville, 1949).

Developing modest sex symbol success, she went on to co-star opposite a number of handsome leading men throughout the post-war years in primarily dramatic works, including Dennis Price in the flop The Bad Lord Byron (David MacDonald, 1949), Dirk Bogarde in Blackmailed (Marc Allégret, 1951), and Herbert Lom in Hell is Sold Out (Michael Anderson, 1951) and The Ringer (Guy Hamilton, 1952). 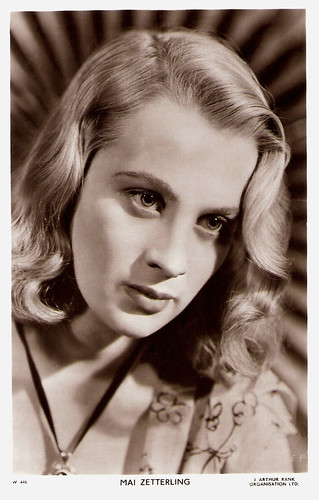 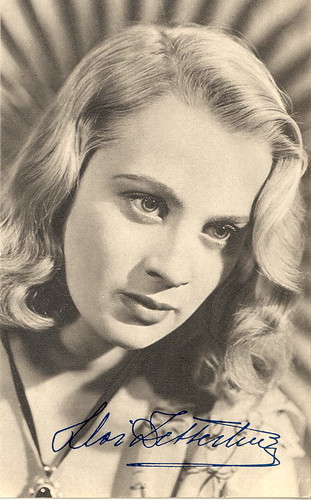 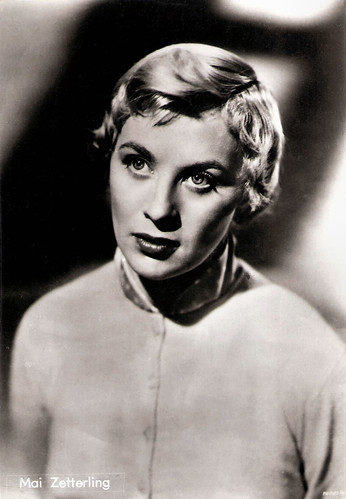 Italian postcard by Bromostampa, Milano, no. 221.


Mai Zetterling accepted an offer to be Danny Kaye's leading lady in the American espionage spoof Knock on Wood (Melvin Frank, Norman Panama, 1954). It was to be her only film in Hollywood, a place she reportedly hated.

In her autobiography 'All Those Tomorrows' (1985), she wrote that she was always too serious about her craft ever to do jobs just for the money. "For that, I had a reputation as a freak in Hollywood, but I can't say I ever regretted [never going back]."

She returned to England and starred on the stage in a production of 'A Doll's House'. Later she appeared in two more American films, the crime caper A Prize of Gold (Mark Robson, 1955) with Richard Widmark, and opposite Tyrone Power in Seven Waves Away (Richard Sale, 1957), a variation on Alfred Hitchcock's Lifeboat (1944).

Along the way she proved just as adaptable and sexy in a smart comedy when she came between husband and wife Peter Sellers and Virginia Maskell in Only Two Can Play (Sidney Gilliat, 1962), based on a satiric novel by Kingsley Amis.

Disheartened by the quality of most of the films she was being offered, she turned her back on acting after the routine action thriller The Bay of St. Michael (John Ainsworth, 1963). 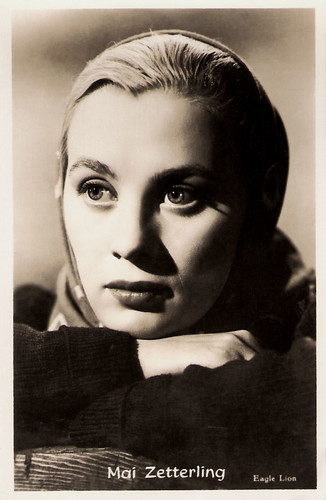 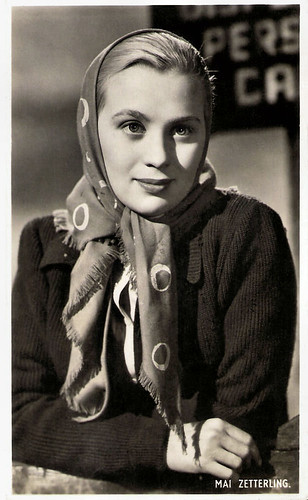 Vintage collectors card, no. A 68. Mai Zetterling in Portrait from Life/The Girl in the Painting/Lost Daughter (Terence Fisher, 1949). 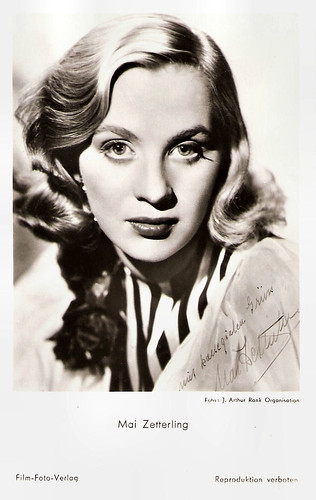 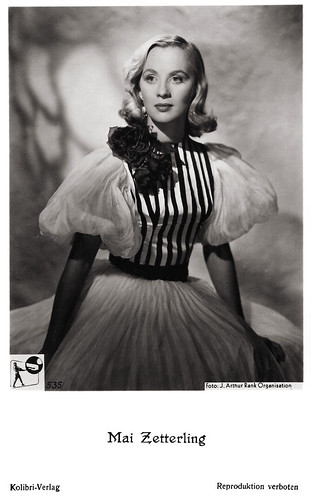 Mai Zetterling would become one of the few women who found regular work as a film director in the 1960s and 1970s. She started her second career with four documentaries for the BBC. Her first effort as a director was the BBC documentary The Polite Invasion (1960).

After she was divorced from Norwegian dancer Tutte (Samuel) Lemkow in 1953, she had married novelist David Hughes in 1958. The couple co-wrote the screenplay of her first fiction short The War Game (1962), an anti-war film about two boys playing a game that turns nasty. The short film won the Golden Lion Prize at the 1963 Venice Film Festival.

Obviously influenced by Ingmar Bergman, her first feature film, the dark, sexy drama Älskande par/Loving Couples (1964), dealt with homosexual themes and featured nudity. Its poster won a prize in Vienna but it was banned in Cannes as obscene.

Her directing ventures were controversial seemed ahead of their time. Nattlek/Night Games (1966) was based on her own novel and was even more of a cause celebre. Banned from the Venice Festival, it was censured by critics for scenes of sexuality, childbirth, and vomiting in detailing the story of a 35-year-old man's attempts to deal with childhood memories marked by depravity and perversity.

Flickorna/The Girls (1968), was a feminist rumination on Aristophanes' classical antiwar play Lysistrata, with Bibi Andersson, Harriet Andersson, and Gunnel Lindblom. In Of Seals and Man (1978) she detailed the disappearing breed of Eskimo seal hunters. In Great Britain, she directed Scrubbers (1982) for HandMade Films about young female offenders sent to Borstal prison.

Bruce Eder at AllMovie: "Her feature films Loving Couples and Night Games (the latter based on her own novel) established Zetterling as one of the most-respected women filmmakers of her generation, and the fact that her work frequently dealt with issues of special interest to women put her at the forefront of the feminist movement." 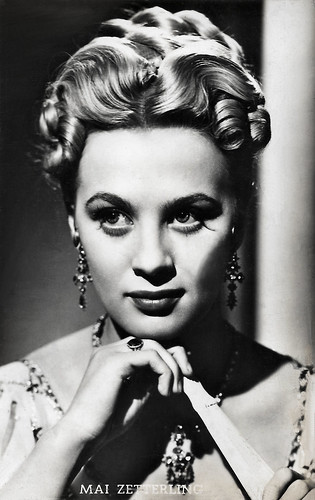 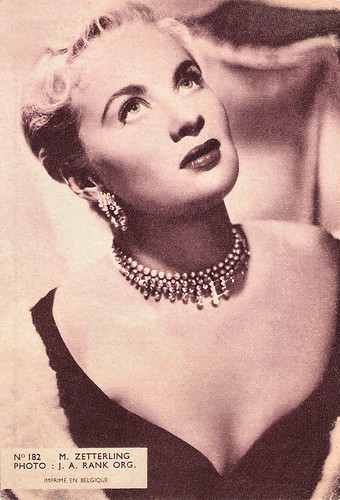 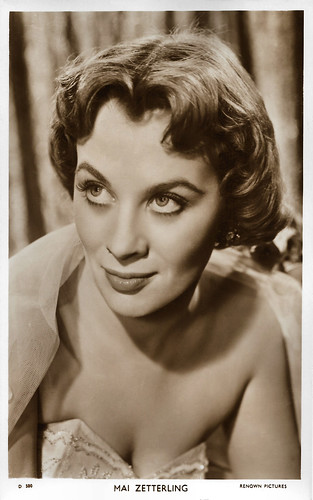 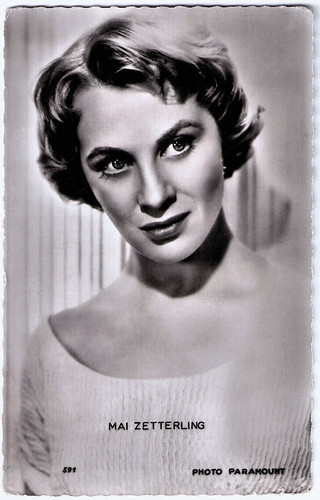 
In the 1970s Mai Zetterling turned her attention to writing short stories and novels. In 1985 she published her frank autobiography, 'All Those Tomorrows'. She confessed she had a love affair and lived with actor Tyrone Power for two years. His chapter in her book is called 'Tyrone the Magnificent'.

Toward the end of her life, she returned to film acting. Best remembered is her wise grandmother in The Witches (Nicholas Roeg, 1990), the film adaptation of Roald Dahl's book. In this wonderful film fantasy, she is forced to tangle with a particularly virulent ringleader, played by Anjelica Huston, to save her grandson from her coven of hags.

She was also excellent in Ken Loach's Hidden Agenda (1990) with Frances McDormand and Brian Cox. Her last film role was in the Swedish production Morfars resa/Grandpa's Journey (Stafan Lamm, 1993) with Max von Sydow.

Mai Zetterling had two children from her first marriage to Tutte Lemkow (1944-1953), a son Louis Lemkow, who is a professor in Barcelona, Spain, and a daughter, Etienne Lemkow. Her marriage to David Hughes (1958 - 1979) was childless. Both marriages ended in a divorce.

She died of cancer in London in 1994. She was 68. Upon her death, she was cremated and her ashes were scattered at her home in Mont Blanc, France. At the time of her death, she was directing the film The Woman Who Cleaned the World, which she also had written.

Great post. I see Netflix has The Girls and Loving Couples. I will check them out.