Hungarian actor and film director Julius von Szöreghy (1883-1943) was one of the busiest supporting actors of the German and Austrian cinema in the second half of the 1920s. 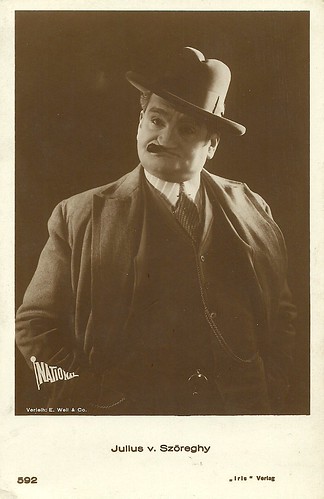 The Largest And Most Expensive Austrian Film Production


Julius von Szöreghy was born Gyula Szöreghy in 1883 in Budapest. He debuted as an actor in 1902 and played at various theatres, for example, in Temesvár and Buda.

His film appearances began in 1913. Among his silent Hungarian films are Mary Ann (Alexander Korda, 1918) starring Ica von Lenkeffy, and the drama Fehér rózsa/White Rose (Alexander Korda, 1919) starring María Corda. Fehér rózsa/White Rose was released by the state-owned Hungarian film industry during the Hungarian Soviet Republic, although production had begun before the regime came to power.

In 1920, he moved to Vienna in Austria. There he changed his name to Julius von Szöreghy. Alexander Korda worked there for the Sascha-Film company.

Korda gave him a part in the silent adventure film Herren der Meere/Masters of the Sea (Alexander Korda, 1922) starring Victor Varconi. Several other Hungarian exiles also worked on the film, including the producer Arnold Pressburger and scriptwriter Ernest Vajda. The film's storyline offered a romantic view of modern-day pirates and their pursuit of treasure.

It was followed by another adventure epic Eine versunkene Welt/A Vanished World (Alexander Korda, 1922). Von Szöreghy was also among the gigantic cast of the silent epic Sodom und Gomorrha/Sodom and Gomorrah (Mihály Kertész a.k.a. Michael Curtiz, 1922), the largest and most expensive production in Austrian film history. In the creation of the film between 3,000 and 14,000 performers, extras and crew were employed. 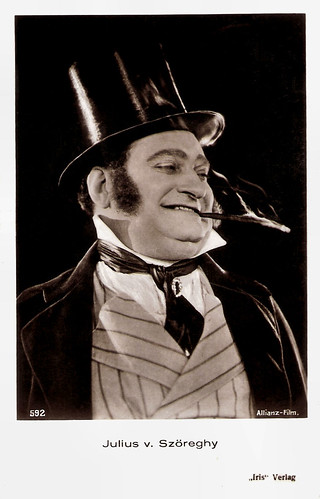 During the second half of the 1920s, he became one of the busiest supporting actor in the German-Austrian silent cinema. The burly Szöreghy embodied usually comic characters, including strange relatives, servants, petty bourgeois and officials.

Von Szöreghy also participated in the German-British romance Der fesche Husar/The Gallant Hussar (Géza von Bolváry, 1928) starring Ivor Novello. The film was a co-production made under an agreement between Gainsborough Pictures and the German studio Felsom-Film and was shot in Berlin.

Von Szöreghy seldom received starring roles. An exception was Mikosch rückt ein/Mickosch engages (Rolf Randolf, 1928) in which he played a factory owner. He also occasionally directed himself, such as in Der Onkel aus Sumatra/The uncle from Sumatra (1930) with Wolf Albach-Retty.

The transition to the sound film was no problem for him and he continued his career in Germany seamlessly during the early 1930s. When the National Socialists seized the power in Germany he returned to Budapest in 1934.

Julius von Szöreghy died in 1943 in Budapest. His final film was the German revue film Karneval der Liebe/Carnival of Love (Paul Martin, 1943), which had been partly filmed in Budapest. He was married to actress René Sello.