Ukrainian actress Vera Voronina (1905-?) had a short but shining career in the late silent era, in Berlin as well as in Hollywood. 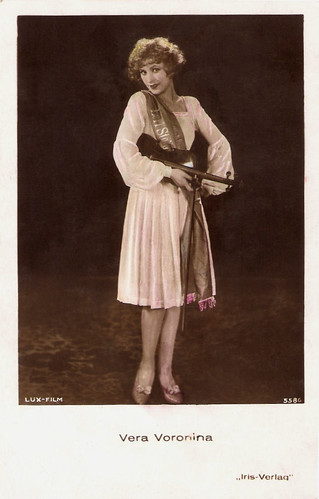 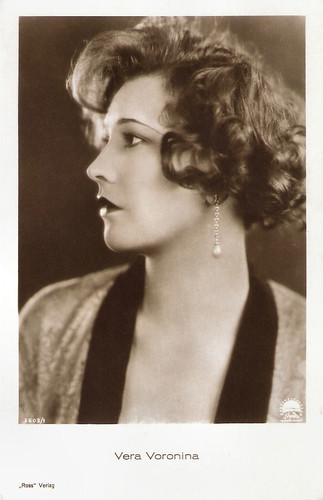 Vera Voronina aka Wera Woronina was born in Kiev, then part of the Russian Empire (now Ukrain) in 1905.

During the Russian revolution her family fled to Sweden.

There she made her film debut in the silent production Hon den enda/Never Say... Never! (Gustav Molander, 1926). She played the female lead opposite Austrian silent film star Alphons Fryland.

The film was probably an adaptation of Alfred de Musset's play Il ne faut jurer rien (You should swear nothing), about a spendthrift young man.

Vera then moved to Austria to play in Haifische der Nachkriegszeit/Sharks of the post-war period (Eugen Preiss, Louis Seeman, 1926).

Probably her first German film was Das deutsche Mutterherz/The Heart of a German Mother (Geza von Bolvary, 1926), starring Margarete Kupfer and a young Heinz Ruhmann in his film debut as her bad son.

Then Voronina played a part in the Austrian production Schwiegersöhne/The Sons-in-law (Hanns Steinhoff, 1926) starring the Danish comic duo Fy og By (aka Pat and Patachon). 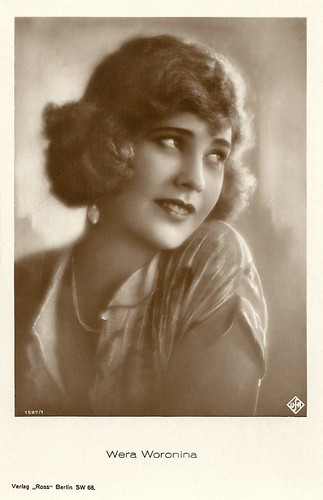 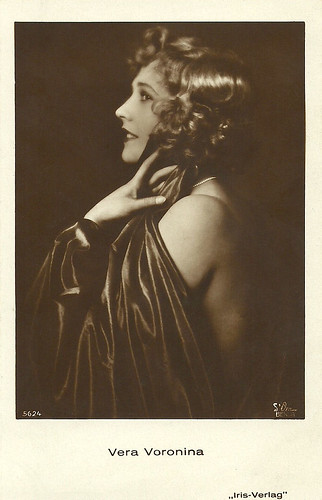 Vera Voronina crossed the Atlantic to play for Paramount in two Hollywood movies: the romantic drama The Whirlwind of Youth (Rowland Lee, 1927) starring Lois Moran, and the comedy Time to Love (Frank Tuttle, 1927), in which Vera had the female lead opposite Raymond Griffith and William Powell.

Subsequently she went to Britain to star in George Pearson's silent adventure film Huntingtower (1928), starring Harry Lauder and Patrick Aherne.Voronina played Russian princess Saskia who is imprisoned in a deserted castle and is saved by a modern day grocer.

She then returned to Hollywood to play Mademoiselle Lapoukhine in Ernst Lubitsch' famous film The Patriot (1928), starring Emil Jannings. It was oone of the first films that won an Academy Award.

The Patriot was nominated for five Oscars. It won the Academy Award for Best Writing Achievement and was nominated for Best Actor in a Leading Role (Lewis Stone), Best Art Direction, Best Director and Best Picture. It is said to contain one of Jannings' best performances as Mad Czar Paul I, but we can't check it, because it is now one of the most sought after of all 'lost' films. Only pieces of the film are left.

Sound film finished off the Hollywood careers of both Jannings and Voronina. Their accents were too heavy and both returned to Germany.

Finally, she played the lead role in the German-Czech production Aufruhr des Blutes/Rebellion of the blood (Victor Trivas, 1929) with Oscar Marion.

Vera Voronina retired when the sound film was introduced and nothing more was heard of her. If you have more information about her, please let us know. 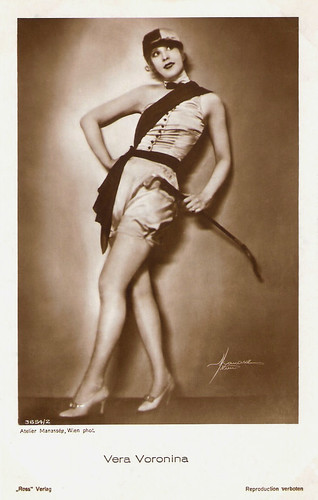 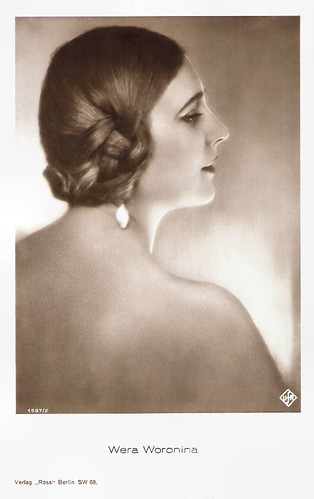