At the age of 16, French actor and singer-songwriter (Marcel) Mouloudji (1922-1994) was already a film star. Angelic and raven-curled, he appeared in one film after another, but he is now best remembered for his politically engaged songs, among which Boris Vian's masterpiece Le Déserteur. He was a free and libertarian artist who explored cinema, theatre, painting, writing and of course music. 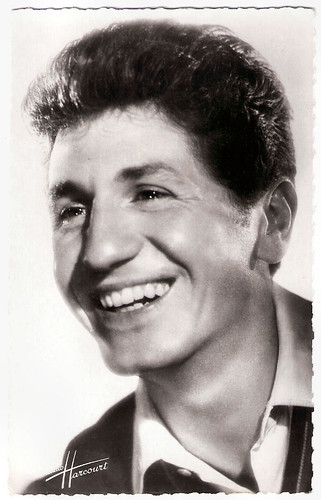 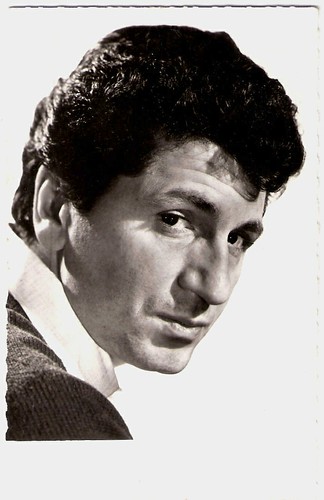 
Marcel Mouloudji was born in Paris in 1922. His father, Said Mouloudji, came from Algeria, where he had worked as a shepherd and farmer before he moved to Paris. In France he became a mason and joined the Communist party. He married a young Breton cleaning woman who was a devote Catholic and bore him two sons, Andre and Marcel.

Marcel went with his father to the Communist Party meetings, a party which he felt close to part of his life. Rather a cute child, he got a role in the film Ménilmontant (René Guissart, 1936) at the age of eleven. Besides this, he worked many odd jobs on the street with his brother André, such as a singer. They enlisted in the Communist youth group Faucons Rouges (Red Falcons) where Marcel and Andre entertained with songs and sketches, and with anti-Fascist, anti-military ballads.

In 1935 Marcel met Sylvain Itkine, director of Le Groupe Octobre, an organization affiliated with the Fédération des Théâtres ouvriers de France (French federation of working class theatre). It was then at only the age of thirteen that he had already met the great names in theatre like Jean-Louis Barrault and Roger Blin.

His illiterate father lived in a small room after his wife went mad and had to be interned, and he was unable to raise his two sons of which the eldest was very ill. Thus during his adolescence, Marcel was hosted for a period by Jean-Louis Barrault, who introduced him to the art world of Paris.

Mouloudji (who came to be known by his surname alone) also took classes with Charles Dullin. In 1936, he performed in his first show Le tableau des Merveilles (The Table of Wonders) inspired by Cervantes and adapted in French by Jacques Prévert. At this time, he took part in a large artistic solidarity movement during the great strikes of 1936. This is how with many other artists he played in factories among other places.

In parallel to the theatre, Mouloudji started in cinema. Through Jacques Prévert, he met Marcel Carné who gave him a small role as a street singer in Jenny (Marcel Carné, 1936) with Francoise Rosay. He then did one film after another. One of the most famous was Les Disparus de St. Agil/Boy’s School (Christian-Jaque, 1938) with Erich von Stroheim. At sixteen, tall, raven-curled and angelic Mouloudji was already a star of the French cinema. 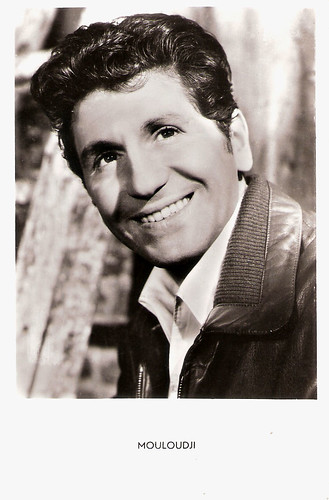 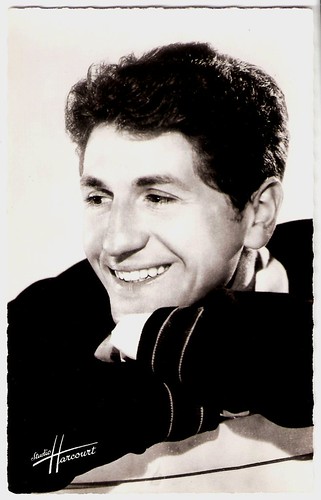 
At the beginning of the Second World War, Mouloudji fled with the Groupe Octobre to the South of France, to Marseille in the unoccupied zone. On this occasion, he met the singer Francis Lemarque. Despite the chaos of the time, he continued working. He had another film success at the side of Raimu in Les Inconnus dans la maison/Strangers in the House (Henri Decoin, 1942) based on a script by Henri-Georges Clouzot in which Mouloudji played an assassin.

Thanks to his brother André, Mouloudji avoided doing the Service du Travail Obligatoire (Mandatory work service). Quickly, he returned to Paris where he did a ton of odd jobs semi-clandestinely. He sang at the Bœuf sur le Toit and discovered the artistic milieu of Saint-Germain-des-Pres.

Mouloudji became one of the leading lights of Parisian literary and theatrical life, and was a regular at the table of Jean-Paul Sartre and Simone de Beauvoir at the Café Flore and at other Saint-Germain hangouts. Keeping company with the literary world drove him to write a novel, Enrico (1945), at only 20. This book with childhood memories was awarded with the new Prix de la Pléiade (the prize of the Pleiades).

In 1943, Mouloudji had met Louise Fouquet, known as Lola-la-Brune, whom he married. She would be his wife and artistic agent until 1969. After the war, he became seriously interested in music and sang songs by Boris Vian or Jacques Prevert in fashionable cabarets.

Meanwhile he also could be seen in such films as Boule de Suif/Angel and Sinner (Christian-Jaque, 1947) with Micheline Presle, Eaux troubles/Troubled Waters (Henri Calef, 1949) as himself, and Nous sommes tous des assassins/We Are All Murderers (Andre Cayatte, 1952), a strong polemic against the death penalty. He had his first hit song with his interpretation of La Complainte des infidèles (The Rime of the infidels), a song from the film La Maison Bonnadieu/The House Bonnadieu (Carlo Rim, 1951).

Jacques Canetti, a famous talent agent and owner of the cabaret Les Trois Baudets (The Three Donkeys) lead Mouloudji to success. He let him record Comme un p'tit coquelicot (As a little poppy), which won the Grand Prix du Disque in 1953 and the Prix Charles-Cros in 1952 and 1953. He had the same success in 1954 with Un jour tu verras (One day you'll see), a song from the film Secrets d'alcôve/The Bed (Ralph Habib a.o., 1954).

Another highlight was the provocative anti-war song Le Deserteur (The Deserter), written by Boris Vian. In 1956, at the height of the implication of France in the Indochina War in Vietnam, the song was banned as disruptive to national security and morale. The recording was removed from the shops, and forbidden on the radio.

However, music would now take the first place in Mouloudji's life, and more and more he wrote his own lyrics. In 1958 he made two of his last appearances in the cinema, in Rafles sur la ville/Sinners of Paris (Pierre Chenal, 1958) with Charles Vanel, and in the Hispano-Swedish film Llegaron dos hombres/Two Men in Town (Eusebio Fernández Ardavín, Arne Mattsson, 1958) with Ulla Jacobsson. 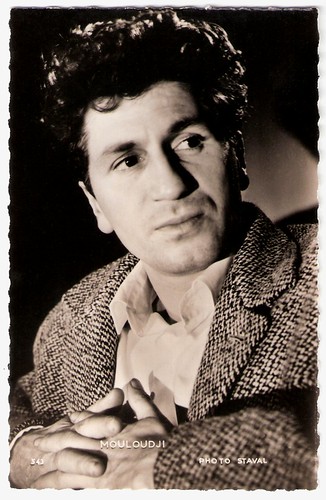 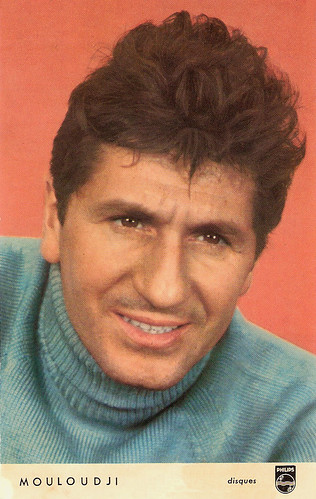 
After having signed with Vogue records in 1961, Mouloudji finally created his own record label in the form of a cooperative. In 1965 he launched thus Graeme Allwright, a young New Zealander living in France. Not inclined to melt into the record industry, Mouloudji didn't have the success that he had had in the cinema during the 1950s. In 1966, he even opened a hair salon.

When the events of May '68 took place it was the political activist who sang in the factories like he had done in 1936. Remaining honest and not sacrificing his convictions for his career was essential for him. In 1970, Mouloudji appeared on stage at the Theatre de la Porte Saint-Martin in the musical La Neige en été (Snow in summer).

Mouloudji returned to the first ranks as a singer with an anti-Establishment song that Boris Vian had written in 1952 but that did not achieve success until Mouloudji's 1971 recording: the title Allons z'enfants (Come On Children) is a sly dig at the first words of the French national anthem. Mouloudji received again the Prix Charles-Cros in 1974, now as a tribute to his recordings, and a second Grand Prix du Disque in 1977.

In 1976, he recorded with the accordionist Marcel Azzola an anthology of the musette, Et ça tournait (And it revolved). In 1980 he released the album Inconnus Inconnues (Unknown Unknown) and he gave countless concerts throughout the country, but the media hardly noticed it. Tired, he devoted more time to writing and painting, his first loves. He published his childhood memories, that mingle wry humour and nostalgia: Le Petit Invité (The Little Guest) in 1989, La Fleur de l'âge (The Flower of age) in 1991 and Le Coquelicot (The Poppy) in 1997.

In 1992, a pleurisy took away part of his voice. This did not stop him from recording a new album which however would never be completed. Marcel Mouloudji died in Paris in 1994. He had two children: Gregory Mouloudji (1960) with Lilia Lejpuner in 1960 and with Nicolle Tessier, Annabelle Mouloudji (1967), who herself interpreted several songs including Fly Lawrence of Arabia during the 1980s. Lilianne Patrick was his last companion.

In his Obituary in The Independent, James Kirkup commemorates Mouloudji thus: “Marcel Mouloudji started as a street urchin and a street singer, and his long career always reflected those early beginnings. He was a real Paris sparrow, light and quick, agile, graceful and symbolic of a certain romanticism of the working-class city streets, with a style that was very pure, direct and heartfelt. A male Piaf.”

I love reading what actors/actresses did before their acting careers ... shepherd and farmer ... sounds better to me than acting!!!!! There goes THOSE eyes again!!!!

Never heard of him. Interesting all I have learned on your site over time.
TFS... Happy PFF

I love all the history associated with a photograph (or postcard).

Thank you for your post. So much us Americans do not know.

Very handsome man - and do you have to have killer eyelashes to be an actor?

I admire that he stood true to his political beliefs.

A real rags to riches story, this one. He seems to have been multi-talented.