With his bumbling English charm, Hugh Grant (1960) achieved international stardom in the romantic comedy Four Weddings and a Funeral (1994). The handsome Brit with his floppy hair and posh accent delivered more endearing comic performances in hits like Notting Hill (1999), Bridget Jones's Diary (2001) and About a Boy (2002). Privately, Grant also proved to have enough sense of humour to survive a media frenzy. 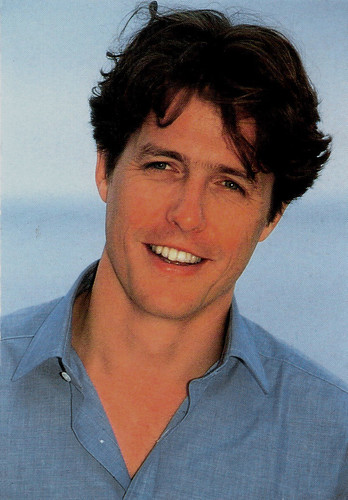 Hugh John Mungo Grant was born in Hammersmith, London, in 1960. He was the second son of Fynvola Susan MacLean, a schoolteacher, and James Murray Grant, a carpet sales representative. His elder brother, James Grant, is a successful banker.

From 1969 to 1978, Hugh attended the independent Latymer Upper School in Hammersmith on a scholarship and played 1st XV rugby, cricket and football for the school. In 1979, he won the Galsworthy scholarship to New College, Oxford where he starred in his first film, Privileged (Michael Hoffman, 1982), produced by the Oxford University Film Foundation.

Viewing acting as nothing more than a creative outlet, he joined the Oxford University Dramatic Society and starred in a successful touring production of Twelfth Night by William Shakespeare. To obtain his Equity card, he joined the Nottingham Playhouse, a regional theatre.

Bored with small acting parts, he created his own comedy revue called The Jockeys of Norfolk with friends Chris Lang and Andy Taylor. The group toured London's pub comedy circuit and proved a hit at the Edinburgh Festival. Their sketch on the Nativity, told as an Ealing comedy, gained them a spot on the BBC2 TV show Edinburgh Nights.

During this time, Grant also appeared in theatre productions of plays such as An Inspector Calls, Oscar Wilde's Lady Windermere's Fan, and Shakespeare's Coriolanus.

His first leading film role came as as a sexually conflicted Edwardian in Maurice (James Ivory, 1987), adapted from E. M. Forster's novel. He and co-star James Wilby shared the Volpi Cup for best actor at the Venice Film Festival for their portrayals of lovers Clive Durham and Maurice Hall.

Despite such acclaim, Grant's next films were largely forgettable affairs with the exception of The Lair of the White Worm (Ken Russell, 1988). Grant attained some cult status as a lord attempting to foil the murderous charms of a campy, trampy vampire (Amanda Donahoe).

He had supporting parts in the BAFTA Award-nominated White Mischief (Michael Radford, 1987) and in Dawning (Robert Knights, 1988), opposite Anthony Hopkins.

His classic good looks made him a natural for romantic leads. He played Lord Byron in the Spanish production Remando al viento/Rowing with the Wind (Gonzalo Suárez, 1988). During the shooting of this Goya Award-winning film, Grant met model and actress Elizabeth Hurley, who was cast in a supporting role as Byron's former lover Claire Clairmont. Their subsequent relationship created much media attention.

In Roman Polanski's Bitter Moon (1992), he portrayed a fastidious and proper British tourist married to Kristin Scott Thomas, who finds himself enticed by the sexual hedonism of a seductive French woman (Emmanuelle Seigner) and her embittered, paraplegic American husband (Peter Coyote). His work in the award-winning Merchant-Ivory drama The Remains of the Day (James Ivory, 1993) went largely unnoticed. 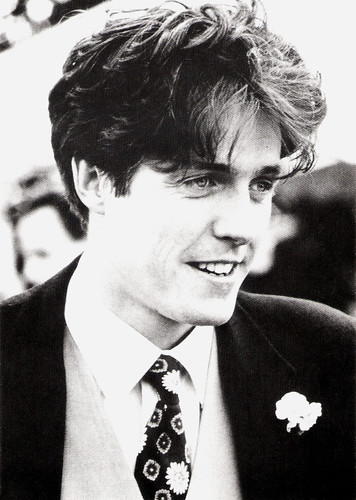 A bohemian and debonair bachelor

At 32, Hugh Grant became an overnight international star when he played bohemian and debonair bachelor Charles in Four Weddings and a Funeral (Mike Newell 1994), opposite Andie MacDowell. The romantic comedy, written by Richard Curtis, became the highest-grossing British film to date with a worldwide box office in excess of $244 million. Among the numerous awards for the film, Grant earned his first and only Golden Globe Award and a BAFTA Award.

He signed a two-year production deal with Castle Rock Entertainment and became founder and director of the UK-based Simian Films Limited. He appointed Elizabeth Hurley as the head of development to look for prospective projects. Simian Films produced two Grant vehicles in the 1990s but closed its US office in 2002.

Grant was one of the choices to play James Bond in GoldenEye (Martin Campbell, 1995), but eventually lost out to Pierce Brosnan. He did play Emma Thompson's suitor in Sense and Sensibility (Ang Lee, 1995), the Academy Award-winning film version of Jane Austen's classic 1811 novel,  and Grant was a cartographer in 1917 Wales in The Englishman Who Went Up a Hill But Came Down a Mountain (Christopher Monger, 1995). He also performed in the Academy Award-winning Restoration (Michael Hoffman, 1995) with Robert Downey Jr.

On 27 June 1995, Grant was arrested in Los Angeles, California, for lewd conduct after police checking into a ‘suspicious parked car’ found him with Divine Brown, a prostitute, in the front seat. He pleaded no contest and was fined $1,180, placed on two years' summary probation.

The arrest occurred about two weeks before the release of Grant's first major studio film, Nine Months (Chris Columbus, 1995) , which he was scheduled to promote on several American television shows. The Tonight Show with Jay Leno had him booked for the same week. In the much-watched interview, Grant was noted for not making excuses for the incident after Leno asked him, "What the hell were you thinking?" Grant answered, "I think you know in life what's a good thing to do and what's a bad thing, and I did a bad thing. And there you have it."

The comedy Nine Months was almost universally panned by critics, but it proved a hit at the box office. Grant made his debut as a film producer with the thriller Extreme Measures (Michael Apted, 1996), a commercial and critical failure.

After a three-year hiatus, he paired with Julia Roberts in Notting Hill (Roger Michell, 1999), made by much of the same team that was responsible for Four Weddings and a Funeral. This new Working Title production displaced Four Weddings and a Funeral as the biggest British hit in the history of cinema, with earnings equalling $363 million worldwide. The comedy helped to restore some of Grant’s luster.

After 13 years together, Grant and Elizabeth Hurley split up in May 2000, but two years later Grant became godfather to Hurley's son Damian (2002). 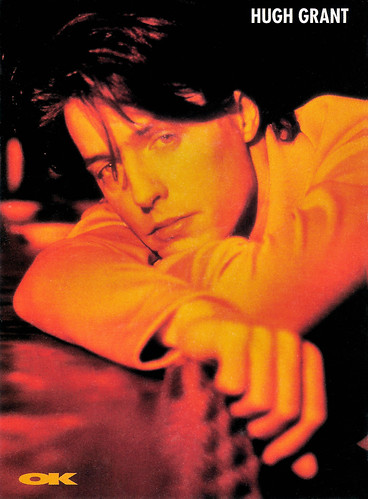 Grant also appeared as another womaniser, Will Freeman, in About a Boy (Paul Weitz, 2002), the film adaptation of Nick Hornby's best-seller At AllMovie, Michael Hastings notes: “Hugh Grant is one of the few actors since Cary Grant who can remain likeable even as he's committing near-despicable acts of dishonesty.” The film earned Grant his third Golden-Globe nomination, while the London Film Critics Circle named Grant its Best British Actor.

About a Boy also marked a notable change in Grant's boyish look. Now 41, he had lost weight and also abandoned his trademark floppy hair. Grant was paired with Sandra Bullock in Warner Bros.'s Two Weeks Notice (Marc Lawrence, 2002), which made $199 million internationally but was panned by critics.

It was followed by the ensemble comedy, Love Actually (Richard Curtis, 2003), headlined by Grant as the British Prime Minister. A Christmas release by Working Title Films, the film was promoted as ‘the ultimate romantic comedy’ and accumulated $246 million at the international box office.

In 2004, Grant reprised his role as Daniel Cleaver for a small part in Bridget Jones: The Edge of Reason (Beebon Kidron, 2004), which, like its predecessor, made more than $262 million commercially.

Gone from the screen for two years, Grant then reteamed with Paul Weitz for the black comedy American Dreamz (2006), in which he portrayed the acerbic host of an American Idol-like reality show. American Dreamz failed financially but Grant’s self-loathing performance was generously praised.

In 2007, Grant starred opposite Drew Barrymore in Music and Lyrics (Marc Lawrence, 2007), a parody of pop culture and the music industry. Grant learned to sing, play the piano, dance (a few mannered steps) and studied the mannerisms of prominent musicians to prepare for his role as a has-been pop singer, based loosely on Andrew Ridgeley.

He co-starred with Sarah Jessica Parker in the romantic comedy Did You Hear About the Morgans? (Marc Lawrence, 2009), which was a commercial as well as a critical failure.

In April 2011, he published an article in the New Statesman ‘The Bugger, Bugged’ about a conversation with Paul McMullan, former journalist and paparazzo for News of the World. In unguarded comments which were secretly taped by Grant, McMullan alleged that editors at the Daily Mail and News of the World, had ordered journalists to engage in illegal phone tapping and had done so with the full knowledge of senior British politicians.

Wikipedia describes how “Grant's article attracted considerable interest, due to both the revelatory content of the taped conversation, and the novelty of Grant himself ‘turning the tables’ on a tabloid journalist”. The later revelation that the voicemail of the by then murdered Millie Dowler had been hacked, and evidence for her murder enquiry had been deleted, turned the coverage from media interest to widespread public and eventually political outrage. “Grant became something of a spokesman against Murdoch's News Corporation, culminating in a bravura performance on BBC television's Question Time in July 2011”.

In November 2011, it was announced that Grant had become a father to a baby girl, Tabitha, earlier that autumn. The identity of the mother, with whom Grant had a 'fleeting affair' according to his publicist, was not at first announced; however, it was later revealed to be a Chinese woman, Tinglan Hong. In an interview on The Ellen DeGeneres Show in April 2012, Grant revealed that his daughter's Chinese name is Xiao Xi, meaning ‘happy surprise’. Grant and Hong reportedly briefly reunited in 2012. In February 2013, Hugh Grant announced that they had recently welcomed a son named Felix Chang.

In the cinema Hugh Grant played six evil characters in the epic drama film Cloud Atlas (Tom Tykwer, Andy Wachowski, Lana Wachowski, 2012). Soon, he can be seen in another romantic comedy, The Rewrite (Marc Lawrence, 2014) with Marisa Tomei, and in the action comedy The Man from U.N.C.L.E. (Guy Ritchie, 2015), based on the legendary TV series. 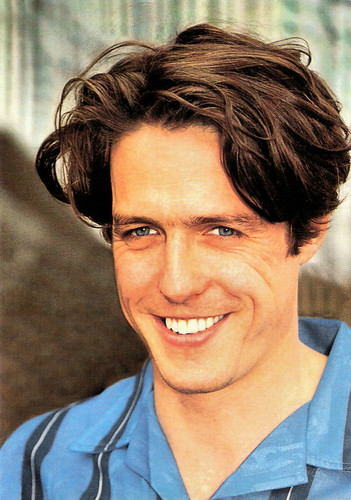 Italian postcard by World Collection, no. 541.