Belgian martial artist and actor Jean-Claude Van Damme (1960) is best known for his Hollywood films of the 1980s and 1990s. His most successful films include Bloodsport (1988), Universal Soldier (1992), and Timecop (1994). But the Belgian crime drama JCVD (2008) gave him his best reviews ever and paved the way for his come-back to the mainstream. 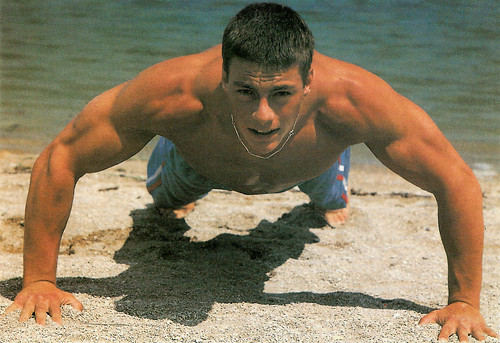 The Muscles from Brussels

Jean-Claude Van Damme (or JCVD) was born Jean-Claude Camille François Van Varenberg in Brussels, Belgium, in 1960. He was the son of Eliana and Eugène Van Varenberg, who was an accountant.

He began martial arts at the age of ten, enrolled by his father in a Shotokan karate school. At the age of 11, Van Damme joined the Centre National De Karaté (National Centre of Karate) under the guidance of Claude Goetz in Belgium.

Van Damme trained for four years and he earned a spot on the Belgian Karate Team. Later he was trained in full-contact karate and kickboxing by Dominique Valera. He eventually earned his black belt in karate.

At the age of 15, Van Damme started his competitive karate career in Belgium. From 1976 to1980, he compiled a record of 44 victories and 4 defeats in tournament and non-tournament semi-contact matches. He started lifting weights to improve his physique, which eventually led to a Mr. Belgium bodybuilding title and the nickname ‘The Muscles from Brussels’.

At the age of 16, he took up ballet, which he studied for five years. According to Van Damme, ballet is an art, but it's also one of the most difficult sports: "If you can survive a ballet workout, you can survive a workout in any other sport."

Van Damme began his full-contact career in 1977, when Claude Goetz promoted the first ever full-contact karate tournament in Belgium. From 1977 to 1982, Van Damme compiled a record of 18 victories (18 knockouts) and 1 defeat. Van Damme retired from competition in 1982. 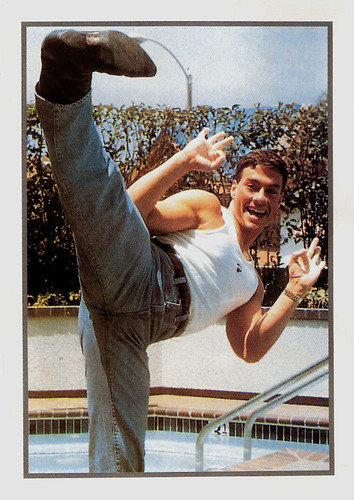 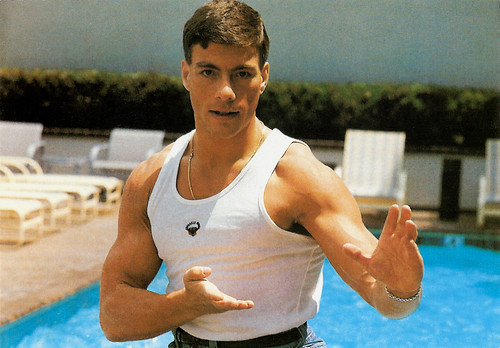 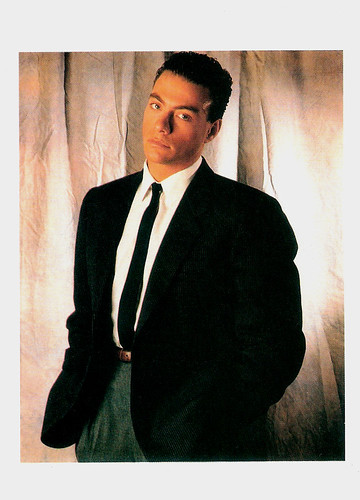 French postcard by Underground, no. C 87.

In 1982, Jean-Claude Van Damme and childhood friend, Michel Qissi, moved to America in the hope of becoming action stars. He took English classes while working as carpet layer, pizza delivery man, limo driver, and thanks to Chuck Norris he got a job as a bouncer at a club.

He and Qissi were cast as extras in the break dancing film, Breakin' (Joel Silberg, 1984). Van Damme had his first part as a ‘Gay Karate Man’ in the short film Monaco Forever (William A. Levey, 1984).

After a small part in Missing In Action (Joseph Zitto, 1984), Van Damme was next cast in the low-budget martial arts-film No Retreat, No Surrender/Karate Tiger (Corey Yuen, 1986), as the Russian villain Ivan Kraschinsky. Van Damme worked for director John McTiernan for Predator (1987) as the titular alien, before being removed and replaced by Kevin Peter Hall. He also had a non-speaking part as a Secret Service agent who carries a polio-crippled President Franklin Roosevelt (Ralph Bellamy) out of a pool in the TV miniseries War and Remembrance (1988).

His breakout film was Bloodsport (Newt Arnold, 1988), based on the alleged true story of martial arts artist Frank Dux. He performed numerous physical feats such as helicopter-style, jump spinning heel kicks, and a complete split. Shot on a 1.5 million dollar budget, it became a box-office hit grossing more than 11 million dollar in the US and 30 million world-wide. A new sensational action star was born.

He then starred in Cyborg (Albert Pyun, 1989), shot for less than $500,000 and filmed in 24 days. Despite negative reviews, it became another box-office hit.

Then the films followed rapidly. In Kickboxer (Mark DiSalle, 1989), his character fights to avenge his brother who has been paralyzed by a Thai kickboxing champion (Qissi). In Double Impact (Sheldon Lettich, 1991) he played the dual role of Alex and Chad Wagner, estranged twin brothers fighting to avenge the deaths of their parents. This film reunited him with his Bloodsport co-star, Bolo Yeung.

In the science fiction action film Universal Soldier (Roland Emmerich, 1992), he co-starred with Dolph Lundgren as soldiers who kill each other in Vietnam but are reanimated in a secret Army project along with a large group of other previously dead soldiers. While it grossed $36,299,898 in the US, it was an even bigger success in the rest of the world, making over $65 million. With a modest $23 million budget, it was Van Damme's highest grossing film at the time. 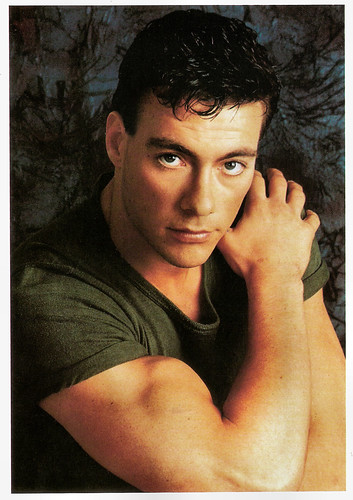 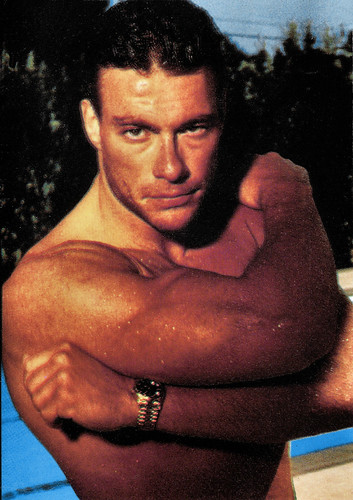 French postcard, no. C 469. Sorry, for the poor technical quality of the card. 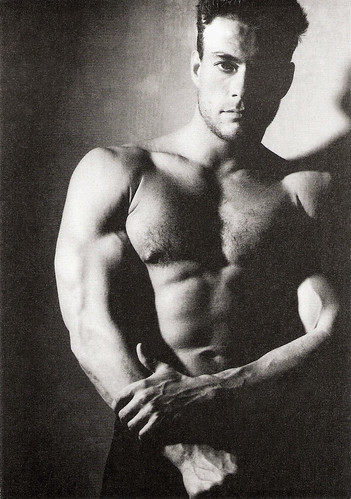 In his next film, the science fiction action film Timecop (Peter Hyams, 1994),Van Damme played a time travelling cop, who tries to prevent the death of his wife (Mia Sara). With a box office of over $100 million worldwide Timecop remains Van Damme's highest grossing film in a lead role to date and is also generally regarded as one of his better films by critics.

After this huge success, Street Fighter (Steven E. de Souza, 1994) with Raul Julia was universally panned by critics and fans of the video game series alike, but it was another commercial success. Sudden Death (Peter Hyams, 1995) did fairly well and was considered one of his best films to date.

There was more trouble. The stress led him to develop a cocaine habit, on which he spent up to $10,000 a week, and consuming up to 10 grams per day by 1996. In 1997, Frank Dux, the martial artist whom Van Damme portrayed in Bloodsport, filed a lawsuit against Van Damme for $50,000 for co-writing and consultation work Dux did on The Quest. According to the lawsuit, Dux also accused Van Damme of lying to the public about his martial arts fight record. Van Damme won the court case.

Van Damme’s next film Universal Soldier: The Return (Mic Rodgers, 1999) was again a box-office flop, and his last theatrically released film until 2008. Van Damme was arrested for driving under the influence in 1999. Attempts at drug rehabilitation were unsuccessful, and he resorted to resolve his addiction via quitting cold turkey and exercise. 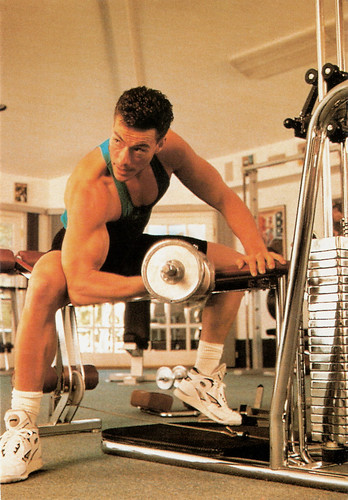 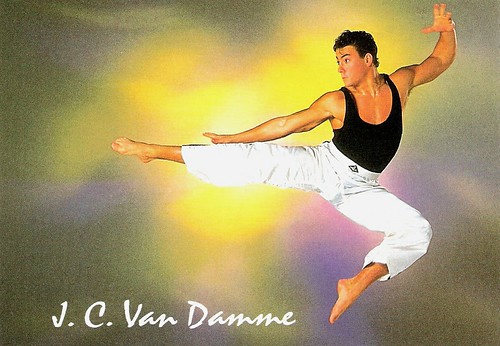 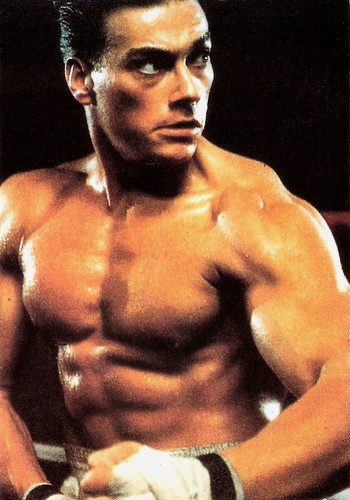 The return of the veteran action stars

Jean-Claude Van Damme returned to the mainstream with the Belgian crime drama JCVD (Mabrouk El Mechri, 2008). He played a down and out action star whose family and career are crumbling around him as he is caught in the middle of a post office heist in his hometown of Brussels, Belgium.

The film was screened at various festivals and Time Magazine named Van Damme's performance in the film the second best of the year (after Heath Ledger's The Joker in The Dark Knight). According to Time, he even deserved an Oscar.

Van Damme reprised his role as Luc Deveraux in Universal Soldier: Regeneration (John Hyams (2009), directed by John Hyams, son of Peter Hyams. Sylvester Stallone offered him a lead role in The Expendables (2010), but Van Damme turned it down.

He voiced Master Croc in Kung Fu Panda 2 (Jennifer Yuh Nelson, 2011), the highest grossing animated feature film of the year. He also appeared in commercials for Coors Light beer, showing him on a snow-covered mountain wearing a sleeveless denim jacket, and for the washing powder Dash.

That year he was honoured with a life-size statue of himself in his hometown of Brussels. Van Damme has been married five times to four different women. His first two wives were Maria Rodriguez (1980-1984) and Cynthia Derderian (1985-1986). He was married to his third wife, bodybuilder Gladys Portugues, until 1992, when he began an affair with actress Darcy LaPier, whom he married in February 1994. That same year he had an affair with his Street Fighter co-star Kylie Minogue during filming in Thailand, though LaPier, who was pregnant at the time with their son Nicholas, did not become aware of this until Van Damme publicly admitted this in 2012.

After leaving LaPier, Van Damme remarried bodybuilder Portugues, in 1999. They have two children: Kristopher van Varenberg (1987) and Bianca Bree (1990). He appeared with both children in the action film Six Bullets (Ernie Barbarash, 2012).

Van Damme has been planning to make a comeback to fight former boxing Olympic gold-medalist Somluck Kamsing. The fight was a focal point in his ITV reality show Jean Claude Van Damme: Behind Closed Doors. However, the fight has been repeatedly postponed, and critics doubt it will ever occur.

But no worries, the Muscles of Brussels keeps himself busy and three new films with him are scheduled for 2014. 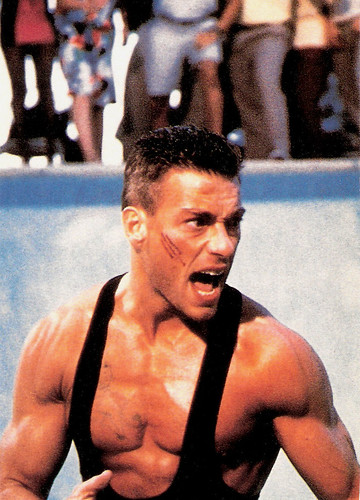 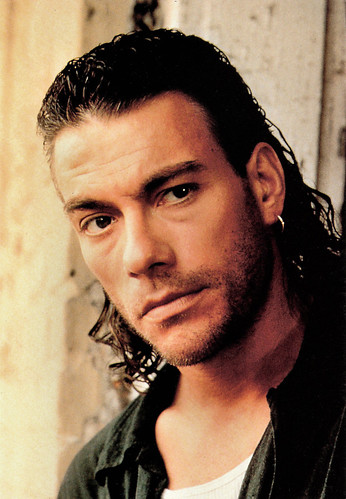