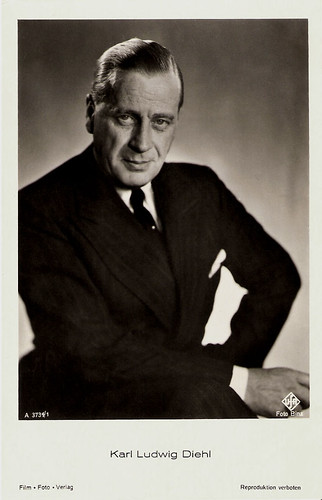 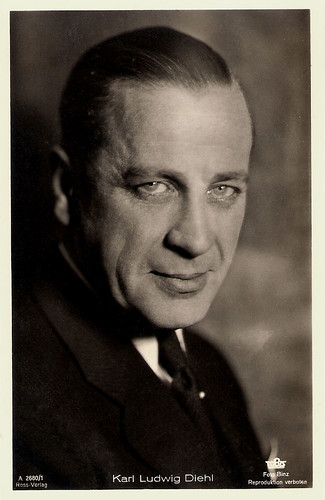 
Karl Ludwig Diehl was born in Halle an der Saale, Germany in 1896 as the son of economist Carl Diehl.

He visited a humanistic Gymnasium in Königsberg and in Freiburg. After graduation, he took acting lessons, but after the start of the First World War he was recruited as a soldier.

In 1919 he was able to continue his training at the Drama School of the Deutsches Theater in Berlin and received first engagements in Wiesbaden, at the prestigious Münchner Kammerspiele in Munich and at the Schillertheater in Berlin.

In 1924, he made his film debut with a supporting role in Die Tragödie der Entehrten/The Tragedy of the Dishonoured (Josef Berger, 1924), a production of the Union Film Co. Ltd. in Munich. In the same year he also appeared in his second film, Die Schuld/The Blame (Josef Berger, 1924).

Five years later he went to Berlin. There he played his first starring role in the silent crime film Masken/Masks (Rudolf Meinert, 1929), a remake of a successful film from 1919. Diehl played the hero, gentleman-detective Stuart Webb and his co-stars were Trude Berliner and Italian star Marcella Albani.

That same year, he starred as Lord Chamberlain opposite Lilian Harvey and Willy Fritsch in both the German and the English versions of the Ufa operetta film Liebeswalzer/Waltz of Love (Wilhelm Thiele, 1929), his first sound film.

He appeared in the hit Der Greife/The Snatcher (Richard Eichberg, 1930) starring Hans Albers. The film was shot concurrently in a German and an English language version (Night Birds). This was a fairly common practice in the early days of talking pictures, when it was not yet practical to overdub dialogue soundtracks.

He co-starred with Lissi Arna in Der Zinker/The Squeaker (Martin Frič, Karel Lamač, 1931), based on an Edgar Wallace novel and also shot in a Czech version. 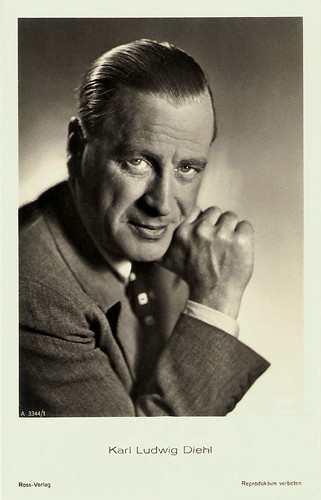 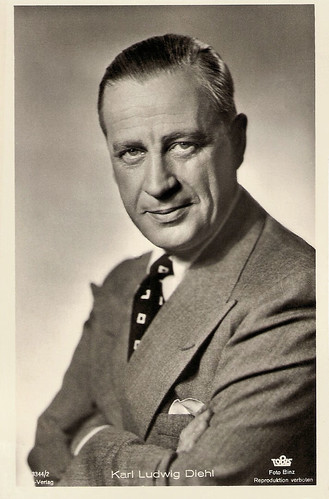 
Karl Ludwig Diehl continued to work for Ufa and other smaller production companies in Berlin. With his distinguished appearance he often played diplomats, noblemen, officers, attorneys, bankers, engineers or doctors.

He was a count in the historical drama Rasputin, Dämon der Frauen/Rasputin, Demon with Women (Adolf Trotz, 1932) starring Conrad Veidt as Gregory Rasputin who wielded influence over the Russian Royal Family around the time of the First World War.

However, the following year Diehl starred in the Austrian romantic comedy Episode (1935), directed, written and produced by Walter Reisch. It is remarkable because it is the only Austrian film with a Jewish producer that was permitted to be imported and shown in Nazi Germany after 1933 and the ban on Jews working in the film industry. The credits were spoken against a musical background; when Reisch's name was reached, the music in German cinemas swelled to make it inaudible. Episode belongs to the popular Austrian light romantic comedy genre known as the Wiener Film, but also contains, for a film of this genre, unusually serious social comment.

From 1931 on, Diehl appeared again and again as a film lover, although he radiated more integrity and reliability than sensuality.

Herbert Selpin’s faithful Oscar Wilde adaptation Ein idealer Gatte/An Ideal Husband (1935) was the first in a series of films in which Diehl played husbands who make up for their lack of lover qualities with loyalty and reliability. 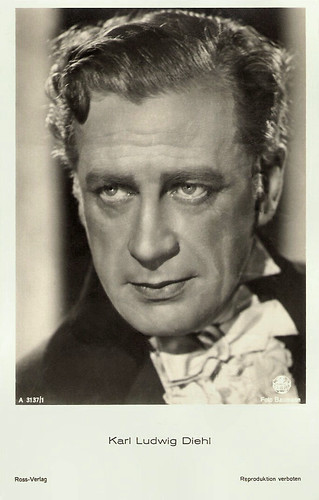 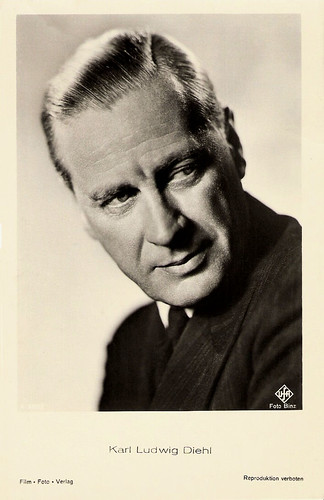 State Actor of the Third Reich


In 1939, Karl Ludwig Diehl was appointed state actor by the Minister of Public Enlightenment and Propaganda, Joseph Goebbels and subsequently worked in another propaganda film.

He played an Irish baron in the anti-British drama Der Fuchs von Glenarvon/The fox of Glenarvon (Max W. Kimmich, 1940) with Olga Tschechova and Ferdinand Marian. It portrayed the years of the Irish fight for independence during World War I and stands in a long line of anti-British propaganda films that portray the British as oppressors or traitors of minorities.

He also starred in the German sports film Das große Spiel/The Big Game (Robert A. Stemmle, 1942). It featured famous German footballers of the era. National coach Sepp Herberger arranged for many German international footballers to be recalled from fighting in the Second World War, ostensibly to improve the quality of the film, but actually to try to protect them from the horrors of war.

Also remarkable was the German war film Der 5. Juni/5 June (Fritz Kirchhoff, 1942) starring Carl Raddatz. The film depicts the events of 1940 when German forces successfully invaded France. It was shot on location in France and Germany. Constant changes to the film, often at the request of the German military, led to large cost overruns. In November 1942 the film was banned by Joseph Goebbels for unspecified reasons. It has been speculated that Goebbels thought the film was not entertaining enough or wished to avoid offending the Vichy government of France.

After WWII, Diehl had theatre engagements in Konstanz, Göttingen and Munich.

In the 1950s, he returned to the cinema. In Germany he played small parts in films like Mädchenjahre einer Königin/The Story of Vickie (Ernst Marischka, 1954) as prime minister Lord Melbourne opposite Romy Schneider as the young Queen Victoria, Des Teufels General/The Devil's General (Helmut Käutner, 1955) starring Curd Jürgens, and Es geschah am 20. Juli/It Happened on July 20th (Georg Wilhelm Pabst, 1955), a dramatic reconstruction of the July 1944 attempt by German Army Officers to assassinate Adolf Hitler with a bomb and to end the war before Germany was totally destroyed.

In Italy he acted in the drama Atto d'accusa/The Accusation (Giacomo Gentilomo, 1951) with Marcello Mastroianni. Diehl starred in 16 more films, but was unable to match his earlier success.

Since 1930, he was married to with Mary von Ruffin, the sister of actor Kurt von Ruffin. They had two daughters. Karl Ludwig Diehl died in his villa Berghof near Penzberg in Bavaria in 1958. He was 61. 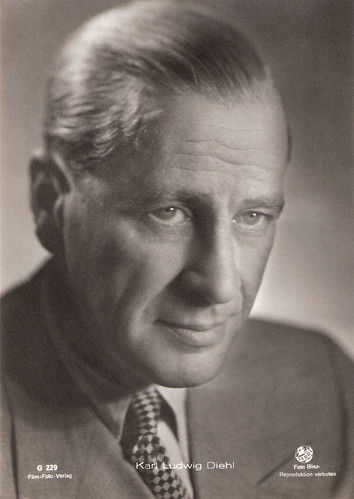 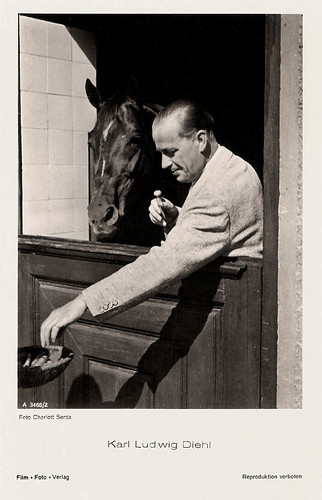 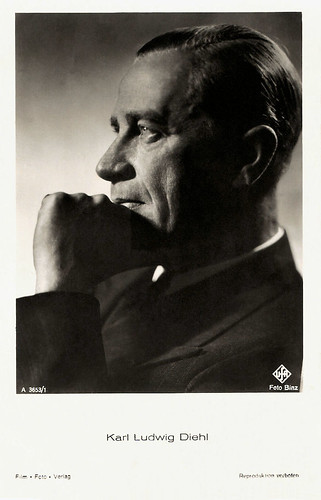