René Cresté (1881-1922) was a French stage and film actor and director of the silent film era. He is best remembered as the amazingly cool title character in the crime-adventure serial Judex (1917-1918), directed by Louis Feuillade. Judex was the first superhero of the cinema. 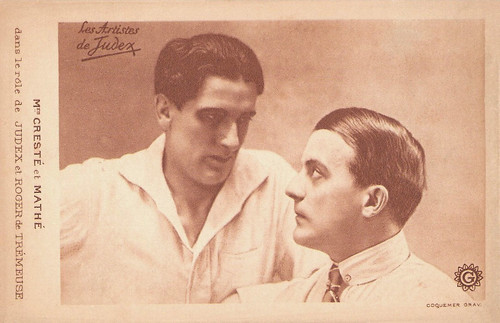 René Cresté was born in Paris, France, in 1881.
He began his acting career on the stages of Paris as a jeune premier in plays such as Claudine à Paris (Claudine in Paris) by and with Colette, Ruy Blas by Victor Hugo, and Adrienne Lecouvreur by Eugene Scribe. In 1913, Alphonse Séché engaged him for his Nouveau Théâtre d’Art to play leading roles in several plays.
Cresté was also signed to a contract to the Gaumont Film Company in 1908. Little is known of these first film appearances as they are considered lost. For Pathé he appeared in La chatte métamorphosée en femme/The cat transformed in a woman (Michel Carré, 1910) with Carlos Avril.
In 1912 he began appearing in a series of mystery shorts directed by Léonce Perret for Gaumont. These films included La bonne hôtesse/The good hostess (Léonce Perret, 1912) with Suzanne Grandais, Le mariage de Suzie/Suzie’s Wedding (Léonce Perret, 1912) with Suzanne Grandais, and Par l’amour/By Love (Léonce Perret, 1913) with Jean Aymé.
At the onset of the First World War, Cresté enlisted in the French army and actively participated in the fighting. Injured and demobilized, he resumed his acting career at Gaumont studios by the end of 1915 and appeared in Son or/His Gold (Louis Feuillade, 1915) with Yvette Andréyor, Dernier amour/Last love (Léonce Perret, 1916) with Valentine Petit, and Le roi de la montagne/The King of the Mountain (Léonce Perret, 1916) with Fabienne Fabrèges.
In 1917 he played in several films for Louis Feuillade, including Le passé de Monique/Monique (Louis Feuillade, 1917) with Edouard Mathé, Mon Oncle/My Uncle (Louis Feuillade, 1917) with Musidora, and Les petites marionnettes/The small puppets (Louis Feuillade, 1917) again opposite Edouard Mathé. 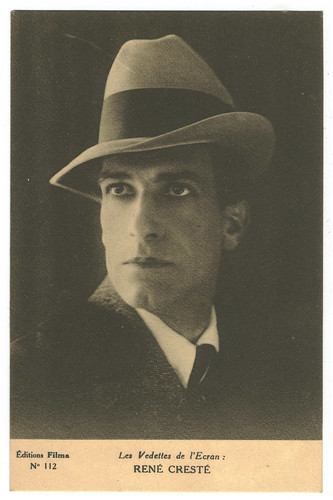 René Cresté was then cast for his greatest role – Judex, a positive hero who steals to help the poor. The character's arch-nemesis is the callous banker Favraux, who had carelessly driven thousands of people into bankruptcy.

In 1916, Feuillade and writer Arthur Bernède had begun to develop a surrealistic character called 'Jacques de Tremeuse' (aka Judex) - a mysterious avenger who sports a signature long dark cloak, a wide-brimmed black hat, and a fatalistic air.

Judex (which means Justice) appears and disappears like a ghost, and would appear to have mild hypnotic powers. He is a master of disguise, and an excellent fighter. He commands the loyalty of an organization composed of circus folks and redeemed apaches. Finally, he flies a plane and has a secret lair, where he interrogates his prisoners through a ‘television’ screen - everything Judex writes on the screen on his desk appears on a similar screen on the wall of his victim's cell.

The serial began production in 1917 and was released the same year in its first instalment to critical and public praise. Jefferey M. Anderson at Combustible Celluloid calls Judex an ‘unalloyed masterwork’: “establishing Feuillade as one of history's greatest directors. He had an uncanny knack for finding shocking beauty in simple images, such as a gate or a wall or an antique car driving down the road”.

The character of Judex is widely recognized as one of cinema's first superheroes. René Cresté, who was already popular among female audiences, now became an immensely popular film star.

Simultaneously with the release of the serial, a novelization, signed by both Feuillade and Bernède, was released, first as a serial in Le Petit Parisien, then in a collected edition by Tallandier. 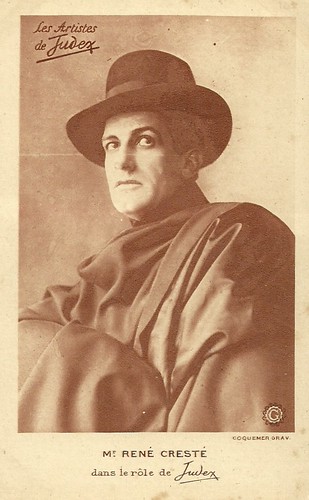 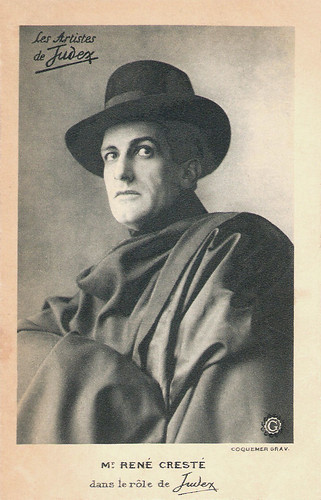 Eyes Without a Face

Disappointed and ruined he decided to take the management of an Parisian Cinema, the Cocorico. He also played Judex again at the stage of the Gaîté-Rochechouart.

In 1922, René Cresté died of tuberculosis in Paris, aged 40. To support the financial needs of his widow and infirmed daughter, a charity gala was organized by friends of the Cresté family with the help of the Surrealist artists in February 1929. Three months following the event, his only daughter Renée died. 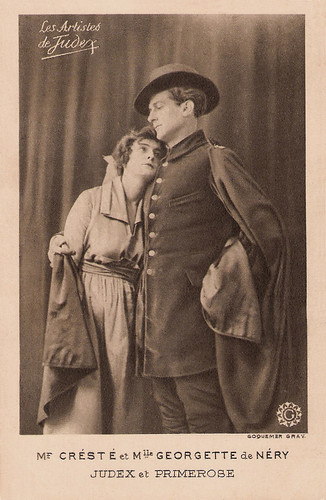 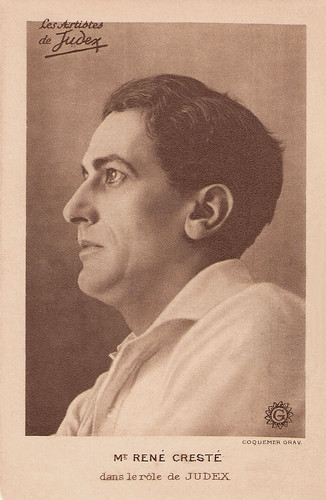