Baroness Irene von Meyendorff (1916-2001) never planned to become a film star, but she appeared in more than 40 films. Unexpectedly, the breathtaking beautiful, cool blonde became a star of the Ufa in the 1940s. Her beauty attracted Josef Goebbels, who got a harsh rebuff by her. After the war she played several parts in interesting German films and led a full, remarkable life. 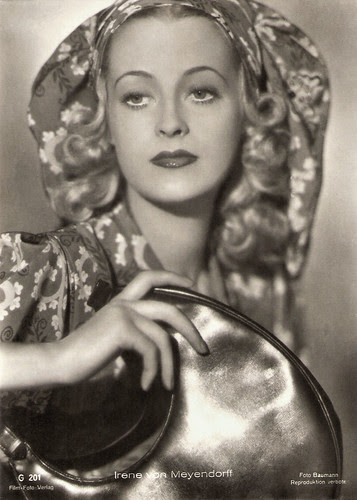 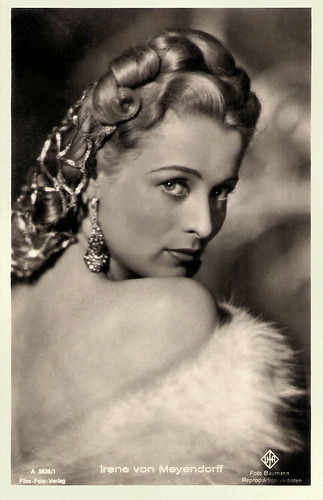 Irene von Meyendorff was born as Irene Isabella Margarethe Paulina Caecilia Freiin von Meyendorff in Reval, Russian Empire (now Tallinn, Estonia) in 1916. She was the eldest child of a German-Baltic aristocrat.
After the October Revolution, the family fled to Bremen in Germany. There Irene's mother Elisabeth left her conservative husband with the children to live an unconventional life in the theatre circles of Weimar/Thuringia.
In the early 1930s Irene went to Berlin to work as a cutter in the Ufa film studios of Babelsberg. Breathtakingly beautiful, she was soon discovered for the screen.
Her debut was a mediocre swashbuckler film, Die letzten Vier von Santa Cruz/The Last Four of Santa Cruz (Werner Klingler, 1936), which unexpectedly made her a star.
She then appeared with Lída Baarová in Verräter/The Traitor (Karl Ritter, 1936), and with Hans Albers and Francoise Rosay in the circus film Fahrendes Volk/People Who Travel (Jacques Feyder, 1938).
Von Meyendorff starred opposite Erich Ponto in Schneider Wibbel/Tailor Wibbel (Viktor de Kowa, 1939) based on a script by Helmut Käutner, and she appeared opposite Hans Moser in the comedy Einmal der liebe Herrgott sein/To Be God For Once (Hans H. Zerlett, 1942). She also starred in operetta films such as Frau Luna/Lady Luna (Theo Lingen, 1943) with Lizzi Waldmüller.
Maybe her best part during this period was the noble Hamburg Patrician daughter Octavia in Veit Harlan's Opfergang/The Great Sacrifice (1944) with Carl Raddatz and Kristina Söderbaum. She also appeared in Harlan’s propaganda film Kolberg/Burning Hearts (Veit Harlan, 1945) starring Söderbaum and Heinrich George.
This film was the pride and joy of the Nazi propaganda machine. It was filmed during the last year of the war. Lavish financial and material resources were expended to produce the film and it premiered just ahead of the advancing allied armies.
Von Meyendorff never was a sympathiser of the Nazi system though. Her first husband, Dr. Heinz Zahler, was a member of the Kreisau Circle, a group of religious motivated anti-Nazi-bourgeois. Her beauty attracted Josef Goebbels, minister of propaganda, who got a harsh rebuff by her ("You would degrade me - and you would degrade yourself"), according to her own recollections. Reportedly, Goebbels's nasty nick name ‘Bock von Babelsberg' (Horny Goat of Babelsberg) was Irene's creation. 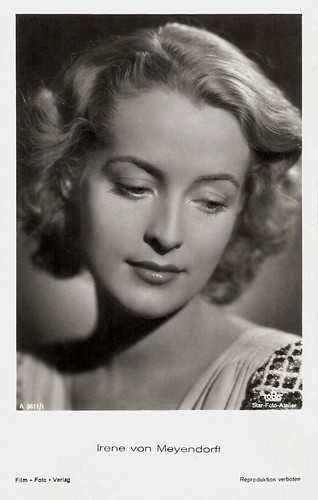 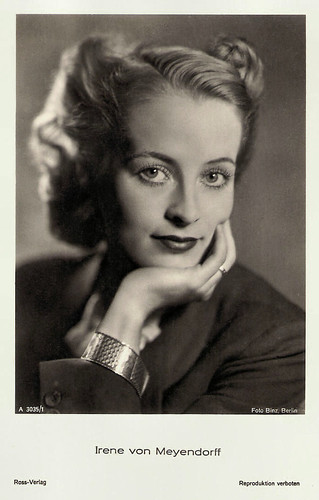 A Modern Adam and Eve

Between 1946 and 1949 some German films showed the will not to just simply go on like nothing happened but to search for new forms of entertainment in the light of the Second World War and the guilt of the German people.
Irene von Meyendorff starred in one of these films, Film ohne Titel/Film Without a Title (Rudolf Jugert, 1948) with Hans Söhnker and Hildegard Knef. Reviewer Herbert Schwaab writes at IMDb that the film is an “interesting reflection about the rights to be entertained: Which stories can be told, when all stories seem to have been finished? It shows the attempts of a film crew to shoot a film. They offer several versions of one simple love story in different film form (melodrama or German expressionism) until they come out with the right form (which is this film itself).”
That same year she was also seen in the bio The Mozart Story (Karl Hartl, Frank Wisbar, 1948) featuring Hans Holt. This was an Austrian film that was begun by Karl Hartl prior to World War II, but was shelved, unfinished, when the war began. After the war, the American rights to the film were purchased by Screen Guild. American-German director Frank Wisbar supervised the English dubbing, and even added some new scenes, with Wilton Graff as Mozart's great rival Antonio Salieri. The result was released as a new film, when it was actually at least 10 years old.
Hal Erickson at AllMovie comments: “Despite its patchwork construction, The Mozart Story weaves a cogent and credible (if not altogether accurate) version of Mozart's life and work.”
Another interesting film was Der Apfel ist Ab/The Original Sin (Helmut Käutner, 1948), a fantasy about a modern Adam and Eve.
The next year she played the lead role in the comedy Einmaleins der Ehe/1 x 1 of the Marriage (Rudolf Jugert, 1949) opposite Hans Söhnker and in 1950 she co-starred in Epilog: Das Geheimnis der Orplid/Epilogue (Helmut Käutner, 1950) a suspenseful drama about people on board of a boat.
In 1953 she starred in the crime film Gift im Zoo/Poison in the Zoo (1953, Hans Müller) with Carl Raddatz. She again worked with Helmut Käutner in the romance Bildnis einer Unbekannten/Portrait of an Unknown Woman (Helmut Käutner, 1954) starring Ruth Leuwerik and O.W. Fischer.
During the second half of the 1950s her roles became less frequent and her films less interesting. She focused more on her stage career and played in theatres in Stuttgart, Zurich, Frankfurt am Main and Hamburg. 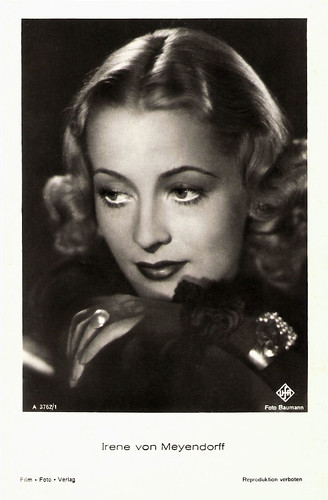 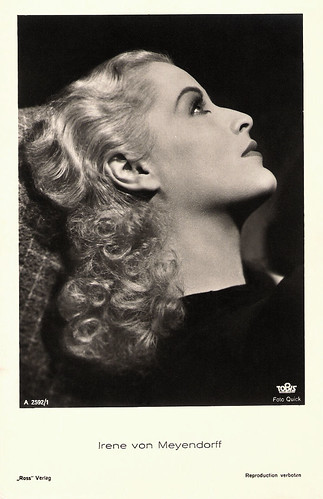 In 1960 Irene von Meyendorff met British actor James Robertson Justice on the set of Die Botschafterin/The Ambassadress (Harald Braun, 1960). The couple fell passionately in love. She left her third husband, journalist Pit Severin, to follow Robertson Justice to England. (Her second husband had been film producer Joachim Matthes).
Incidentally she appeared in German films like Lange Beine - lange Finger/Long Legs, Long Fingers (Alfred Vohrer, 1966) starring Senta Berger.
She became a British citizen in 1967, and changed her name to Irina. She did small parts in international films with her husband such as the crime film Hell is empty (John Ainsworth, Bernard Knowles, 1967) starring Martine Carol in her last role, and the costume drama Mayerling (Terence Young, 1968) with Omar Sharif and Catherine Deneuve.
Her last film was the Italian production Il gesto/The Gesture (Marcello Grottesi, 1973) with Ilse Steppat and Willy Birgel.
A series of strokes gradually prevented James Robertson Justice working and led to his bankruptcy. Earning her living as a teacher at a local Language School, Irina nursed him until his death in 1975.
After 14 years of living together, they were finally married on his deathbed in hospital.
In 1990, she married his best friend and their neighbour, the millionaire and philanthropist Keith ‘Toby’ Bromley. She was a passionate gardener and excellent cook, her rose garden at Ashley Manor - the home she and Keith Bromley shared - was renowned locally as was her extensive hospitality.
Even at the age of 70 she sailed to the Arctic and the Orinoco River. For her long and acclaimed work in the German cinema, she was awarded the Filmband in Gold in 1988.
In 2001, Irene von Meyendorff died of natural causes in King's Somborne, Hampshire, UK, after a full, remarkable life. She had one son, Andreas Zahler, who died in 1985. She had two grandchildren, Rebecca, daughter of Andreas Zahler, and a son from his first marriage. 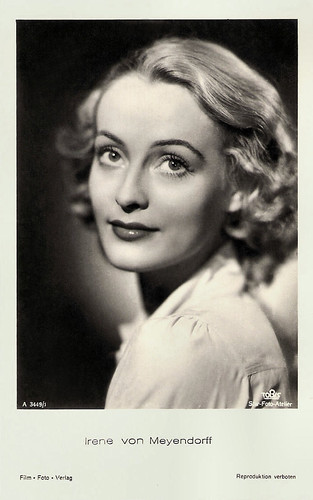 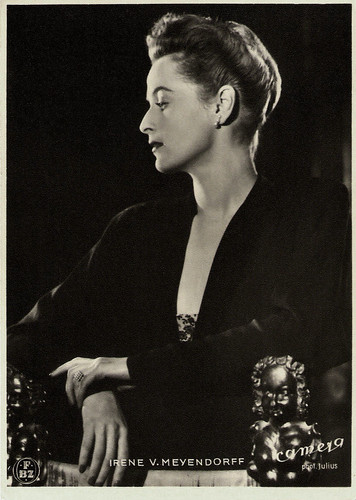 Vintage postcard in the Camera series by F.B.Z. Photo: Julius. 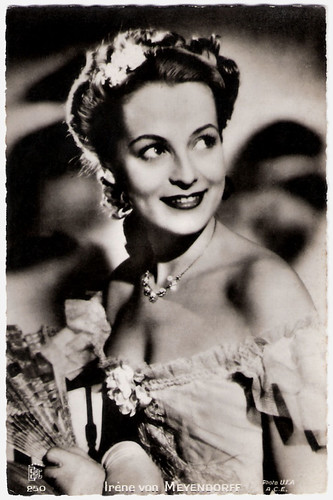