Carla Del Poggio (1925-2010) was the female star of Federico Fellini’s bittersweet debut Luci del varietà/Variety Lights (1950). In the 1940s and 1950s she also starred in films by such other famous directors as Vittorio De Sica and her husband, Alberto Lattuada.


Carla Del Poggio was born as Maria Luisa Attanasio in Naples, Italy, in 1925.

At 15, while she was studying foreign languages and modern dance, she started attending the Italian school for performing arts, Centro Sperimentale di Cinematografia in Rome.

Director Vittorio De Sica chose her for his second film Maddalena, zero in condotta/Maddalena, Zero for Conduct (Vittorio De Sica, 1940). This was not yet one of his famous neorealist films but a white telephone comedy - a typical Italian genre of the 1930s and early 1940s: fluffy comedies situated in the upper classes. Del Poggio played the title role, a dreamy Italian school girl who accidentally gets entangled in a romantic affair with a young Austrian businessman (played by De Sica himself).

Two years later she appeared in De Sica’s Un garibaldino al convent/A Garibaldian in the Convent (Vittorio De Sica, 1942), an old woman's poignant reminiscence of her youth in a convent school, the happy and sad moments, and her tragic love for a Garibaldian soldier.

At 19, Del Poggio met her future husband, director Alberto Lattuada, 11 years her senior, who chose her for a role in a film adaptation of the renowned novel Gli indifferenti (Times of Indifference) by Alberto Moravia. The film was never realized, but they eventually married a few months later in 1945.

She did star in his film Il bandito/The Bandit (Alberto Lattuada, 1946) with Anna Magnani. Other films in which she appeared were Gioventù perduta/Lost Youth (Pietro Germi, 1947) with Massimo Girotti, Caccia tragic/The Tragic Hunt (Giuseppe De Santis, 1947), and Senza pieta/Without Pity (Alberto Lattuada, 1948), an affecting drama of an affair between an Italian girl and an Afro-American GI (John Kitzmiller). The plot was based on an actual postwar dilemma: in Northern Italy, dozens of black American GIs chose to go AWOL rather than return to a racially divided United States.

The following year Del Poggio also appeared in her husband’s Il mulino del Pò/The Mill on the Po (Alberto Lattuada, 1949), co-starring Jacques Sernas and based on a screenplay by Federico Fellini.

According to Hal Erickson at AllMovie: “The romantic plot line is placed in context within the events leading up to the famous Po Valley farmers' strike of 1876; characteristically, Lattuada offers a topical political slant to the facts at hand. As in his other neorealist exercises, Lattuada manages to bridge the gap between ‘art’ and box-office appeal in Il Mulino del Po.” 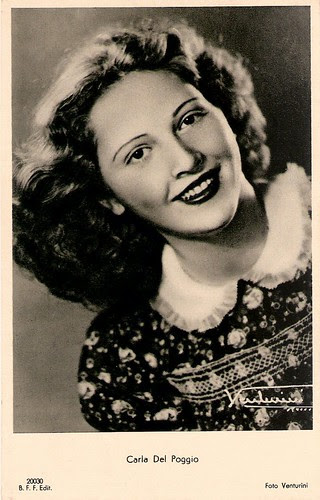 
Carla Del Poggio and her husband Alberto Lattuada founded a co-op with Federico Fellini and his wife Giulietta Masina.

Together they realized Fellini's film debut Luci del varietà/Variety Lights (Alberto Lattuada, Federico Fellini, 1950), a bittersweet drama about a bunch of misfits in a traveling vaudeville troupe. The group of actors, dancers, and performers struggle to make it from town to town, playing to minimal crowds.

Their leader, Checco Dal Monte (Peppino De Filippo) just wants his act to be a success. He meets beauty queen Lily (Del Poggio) and puts her in the show as a dancer. The infatuated Checco breaks up the troupe in order to put on a showcase for Lily instead, but his star-eyed discovery proves to be relentless in her quest for fame.

However, during the 1950s she mainly took part in stage plays.

In her last film, I girovaghi/The Wanderers (Hugo Fregonese, 1956), she starred opposite Peter Ustinov and Abbe Lane. Later she worked regularly for RAI television, and in the late 1960s she retired.

Carla Del Poggio passed away in Rome in 2010. She was married to Alberto Lattuada for sixty years till his death in 2005. They had two children.

I love the phrase "white telephone comedy" I've not heard that before despite the fact that so many American films were also upper class fluff during that time. I enjoyed several of your recent posts including your PFF entry for Friday! Thanks so much for stopping by my blog!

Thanks MuseSwings! Actually there were always white telephones in the art déco sets of these films. A kind of bourgeois status symbol at the time. The Italians called these films (both comedies ánd melodramas) Telefoni Bianchi. Sounds even better.