Mounet-Sully (1841-1916) was one of the greatest French theatre actors of the late 19th and early 20th century. He appeared in several short silent films of the Film d'art cinema. 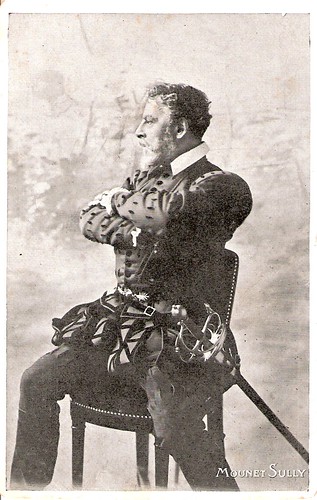 He made his stage debut at the Odeon theatre in 1868, without attracting much attention.

His career was interrupted by the Franco-Prussian War of 1870-1871, and his passion for his military career almost convinced him to give up the stage career.

In 1872 he had his breakthrough, when he could play Oreste in Jean Racine's Andromaqueat the Comédie-Française.

In the following years is striking presence, voice and vigorous acting made him one of the most important actors of the Comédie-Française. He played the great roles of the classic repertory, including Achilles in Racine's Iphigenie et Aulide, Rodrigue in Le Cid, Nero in Brittanicus, Hippolyte in Phèdre and the title parts in Victor Hugo's Hernani and Ruy Blas.

He reached his apex in 1881 with the première of L'Oedipe roi, a French version by Jules Lacroix of Sophocles' drama Oedipus Rex.

Mounet-Sully was innovating in thinking that an actor should lose his own personality and totally absorb that of his character, once on stage.

His Oedipus was such a performance that only until 1937, when Jean Cocteau's La Machine Infernale really revived Sophocles' play in a modernised version at the Theatre Antoine. It was also the adebut for actor Jean Marais.

Another triumph for Mounet-Sully was his Hamlet in the play by William Shakespeare in 1886. He was created chevalier of the Legion of Honour in 1889. 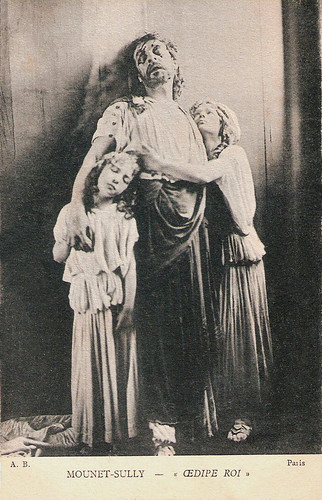 French postcard by A.B. Photo: still of Mounet-Sully in the play Oedipe Roi/Oedipus Rex by Sophocles. 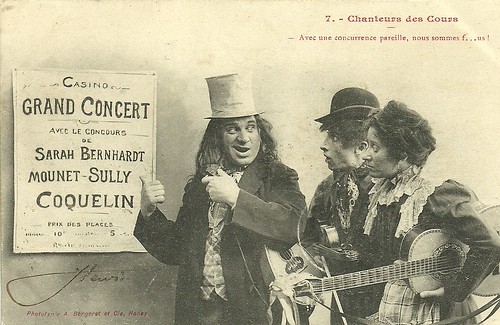 French postcard in the series Chanteurs des Cours, no. 7. Photo: A. Bergeret & Co., Nancy. Caption: "Avec une concurrence pareille, nous sommes f....us!" (With such a competition, we are lost!)
This postcard is from a caricature series on street singers. The names on the poster refer to well acclaimed actors around 1900: Sarah Bernhardt, Mounet-Sully and Jean Coquelin.

Mounet-Sully also was a film actor during the short French 'wave' of the film d'art cinema.

In 1908 he acted in a film after his stage success Oedipe roi, directed by André Calmettes.

Soon other examples of his previous popular stage performances were transformed into film: Brittanicus (André Calmettes, 1908) opposite Gabrielle Réjane and Hamlet (Gerard Bourgeois, 1908).

In 1913 Mounet-Sully acted in another adaptation of Sophocles' play, entitled La légende d'Oedipe, and directed by Gaston Roudès. In this film also played his younger brother Paul Mounet and Joë Hamman.

When the First World War broke out and many actors were mobilised, he defended the interests of his Comédie-Française, where he had been a Doyen (dean) since 1894.

Although he was over seventy years old, he still played at the Comédie-Française from time to time. In 1915 he played here his last role, his former success Polyeucte.

He was a good friend, co-performer, and one-time lover of legendary actress Sarah Bernhardt. 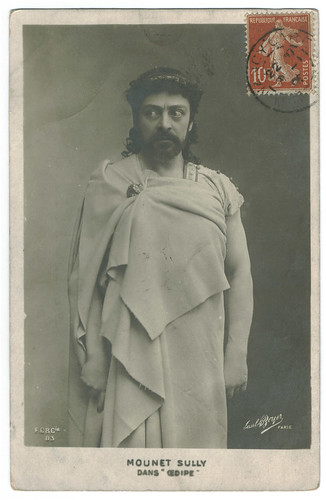 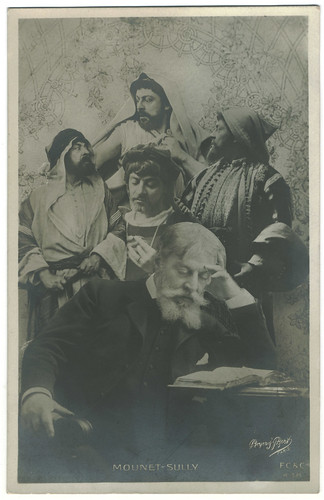