Dame Wendy Hiller DBE (1912-2003) was an English film and stage actress, who enjoyed a varied acting career that spanned nearly sixty years. She is best remembered as Eliza Doolittle in Pygmalion (1938). Despite many notable film performances, she chose to remain primarily a stage actress. 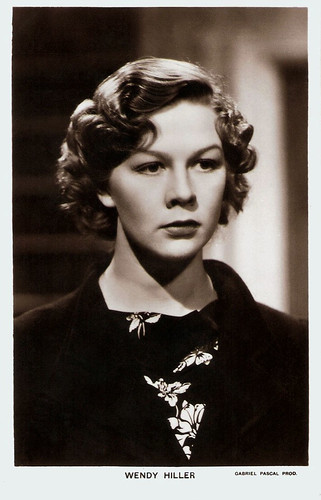 Wendy Margaret Hiller was born in Bramhall, near Stockport, England in 1912. She was the daughter of Frank Watkin Hiller, a Manchester cotton manufacturer, and Marie Hiller-Stone.

In a situation similar to her Doolittle character, Wendy's parents enrolled her in speech and refinement at the Winceby House School in Sussex in the hopes of disguising her humble Lancashire roots and receiving upperscale marriage proposals for her.

Such hopes were vanquished when the highly determined Hiller set her career sights on the theatre. Hiller began her professional career as an actress in repertory at Manchester in the early 1930s.

She first found success as slum dweller Sally Hardcastle in the stage version of Love on the Dole in 1934. The play was an enormous success and toured the regional stages of Britain.

In this play she made her West End debut in 1935 at the Garrick Theatre. She married the play's author Ronald Gow, fifteen years her senior, in 1937.

That same year as she made her film debut in the comedy Lancashire Luck (Henry Cass, 1937), scripted by Gow.

The huge popularity of Love on the Dole took the stage production to New York in 1936, where her refreshingly frank performance attracted the attention of George Bernard Shaw.

Shaw recognized a spirited radiance in the young actress, which was ideally suited for playing his heroines. He and his wife, who were childless, took a pronounced and parental liking to the budding, youthful star.

Shaw cast her in several of his plays, including Saint Joan, Pygmalion and Major Barbara and his influence on her early career is clearly apparent. She was reputed to be Shaw's favourite actress of the time.

At Shaw's insistence, she also starred as Eliza Doolittle in the film Pygmalion (Anthony Asquith, Leslie Howard, 1938) with Leslie Howard as Professor Higgins. The film won the 1939 Academy Award for Adapted Screenplay, and also received nominations for Best Picture, Best Actor (Howard) and Best Actress (Hiller). This was a first for a British actress in a British film.

She was also the first actress to utter the word ‘bloody’ in a British film, when Eliza utters the line "Not bloody likely, I'm going in a taxi!".

She followed up this success with another Shaw adaptation, Major Barbara (Gabriel Pascal, 1941) with Rex Harrison and Robert Morley. It was again both a critical and financial success.

Powell and Pressburger signed her for The Life and Death of Colonel Blimp (1943), but her second pregnancy led to Deborah Kerr being cast instead. Determined to work with Hiller, the film makers later cast her with Roger Livesey again for I Know Where I'm Going! (Michael Powell, Emeric Pressburger, 1945), another classic of British cinema.

Joel Hirschorn described Hiller in Rating the Movie Stars (1984) as "a no-nonsense actress who literally took command of the screen whenever she appeared on film". 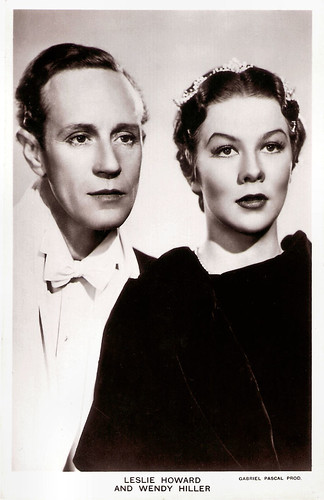 Rather plain but strong willed characters

In the early 1940s, Wendy Hiller and husband Ronald Gow moved to Beaconsfield, Buckinghamshire, where they brought up two children, Ann (1939–2006) and Anthony (1942).

Despite her early film success and offers from Hollywood, Hiller returned to the theatre full-time after 1945 and only occasionally accepted film roles.

In the course of her stage career, she won popular and critical acclaim in both London and New York. She excelled at rather plain but strong willed characters. After touring Britain as Viola in Twelfth Night (1943) she returned to the West End to be directed by John Gielgud as Sister Joanna in The Cradle Song (1944).

Unlike other stage actresses of her generation, she did relatively little Shakespeare, preferring the more modern dramatists such as Henrik Ibsen and new plays adapted from the novels of Henry James and Thomas Hardy among others.

The string of notable successes continued as Princess Charlotte in The First Gentleman (1945) opposite Robert Morley as the Prince Regent, Pegeen in Playboy of the Western World (1946) and Tess of the d'Urbervilles (1946-1947), which was adapted for the stage by her husband.

In 1947, Hiller originated the role of Catherine Sloper, the painfully shy, vulnerable spinster in The Heiress on Broadway. The play, based on the Henry James novel Washington Square, also featured Basil Rathbone as her emotionally abusive father. The production enjoyed a year-long run and would prove to be her greatest triumph on Broadway.

On returning to London, Hiller again played the role in the West End production in 1950. She did a two year run in N. C. Hunter's Waters of the Moon (1951–52), alongside Sybil Thorndike and Edith Evans.

In the 1950s, Hiller returned to film. She portrayed an abused colonial wife in Outcast of the Islands (Carol Reed, 1952), with Robert Morley and Trevor Howard. She played mature, supporting roles in films like Sailor of the King (Roy Boulting, 1953) and a memorable victim of the Mau Mau uprising in Something of Value (Richard Brooks, 1957) starring Rock Hudson.

In 1959, she won the Oscar for Best Supporting Actress for Separate Tables (Delbert Mann, 1958), as a lonely hotel manageress and mistress of Burt Lancaster.

On stage, she did a notable performance as Portia in Julius Caesar among others. In 1957, Hiller returned to New York to star as Josie Hogan in Eugene O'Neill's A Moon for the Misbegotten, a performance which gained her a Tony Award nomination as Best Dramatic Actress. 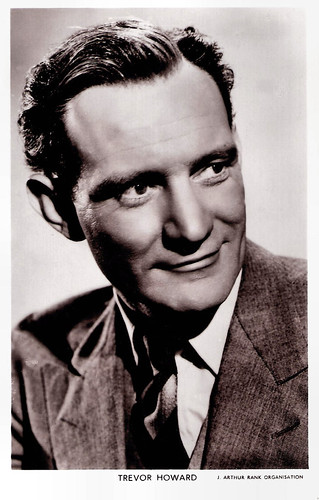 Wendy Hiller received a BAFTA nomination as Best Supporting Actress for her portrayal of the domineering, possessive mother in Sons and Lovers (Jack Cardiff, 1960) with Trevor Howard and Dean Stockwell.

She reprised her London stage role in the southern gothic Toys in the Attic (1963), which earned her a Golden Globe nomination as the elder spinster sister in a film which also starred Dean Martin and Geraldine Page.

Her final appearance on Broadway was in 1962 as Miss Tina in Michael Redgrave's adaptation of The Aspern Papers, from the Henry James novella.

She received a third Oscar nomination for her performance as the simple, unrefined, but dignified Lady Alice More, opposite Paul Scofield as Thomas More, in A Man for All Seasons (Fred Zinnemann, 1966).

As she matured, she demonstrated a strong affinity for the plays of Henrik Ibsen, as Irene in When We Dead Awaken (1968), as Mrs. Alving in Ghosts (1972), Aase in a BBC TV play of Peer Gynt (1972) and as Gunhild in John Gabriel Borkman (1975), in which she appeared with Ralph Richardson and Peggy Ashcroft.

Later West End successes such as Queen Mary in Crown Matrimonial (1972) proved she was not limited to playing dejected, emotionally deprived women.

Regarded as one of Britain's great dramatic talents, she was created an Officer of the British Empire (OBE) in 1971 and raised to Dame Commander (DBE) in 1975.

Her role as the grand Russian princess in the Whodunnit star ensemble of Murder on the Orient Express (Sidney Lumet, 1974), won her international acclaim and the Evening Standard British Film Award as Best Actress. This Agatha Christie adaptation starring Albert Finney as Hercule Poirot was a huge commercial success.

Other notable film roles included a Jewish refugee fleeing Nazi Germany with her dying husband in Voyage of the Damned (Stuart Rosenberg, 1976) and the London Hospital matron in The Elephant Man (David Lynch, 1980).

On stage she revisited some earlier plays playing older characters, as in West End revivals of Waters of the Moon (1977-1978) with Ingrid Bergman and The Aspern Papers (1984) with Vanessa Redgrave.

She was scheduled to return to the American stage in a 1982 revival of Anastasia with Natalie Wood, until Wood's death just weeks before rehearsals.

On TV she played in BBC dramatizations of Julian Gloag's Only Yesterday (1986) and the Vita Sackville-West novel All Passion Spent (1986), in which she was the quietly defiant Lady Slane. This performance earned her a BAFTA nomination as Best Actress.

Hiller made her final West End performance in the title role in Driving Miss Daisy (1988). Her last appearance, before retiring from acting, was the title role in the TV film The Countess Alice (Moira Armstrong, 1992), with Zoë Wanamaker.

Her husband Ronald Gow died in 1993, but Hiller continued living at their home until her death a decade later. Despite a busy professional career, throughout her life she continually took an active interest in aspiring young actors by supporting local amateur drama societies, as well as being the president of the Chiltern Shakespeare Company until her death.

Chronic ill health necessitated her eventual retirement from acting in 1992. She spent the last decade of her life quietly at her home in Beaconsfield, where she died in 2003 of natural causes at the age of 90.