The Choice of Jan-Hein Bal

Today, my former colleague Jan-Hein Bal takes leave as the stills librarian of EYE Film Institute in Amsterdam due to retirement. For 41 years, Jan-Hein worked for The Netherlands Filmmuseum and later for EYE. So for this special occasion, we 're-issue' a post with his favourite film postcards in the series The Choice of....

Jan-Hein Bal: "I'm no film collector, only of information on subjects like Saul Bass, 70mm, Amsterdam cinema buildings etc. My largest collection are memories of thousands of movies I saw. I am Amsterdam EYE Filmmuseum stills librarian with over half a million stills, including tens of thousands of postcards, mostly published by Ross. About 1500 are digitized including 500 portraits but further scans are only produced on request and visible in our library only. This selection includes no portraits but a very different choice." Double click at the pictures to see them in full view.

Jan-Hein Bal: "One of several Dutch postcards from Bambi, my first cinema experience in 1957 aged eight. I always vividly remembered Bambi on ice, the realistic forest fire and the impressive scenery, unequalled until The Lion King. Half a century later on second viewing, I was excited by the multi plane camera depth effect."

"I am in charge of the Amsterdam EYE Filmmuseum's stills collection and love location shots with filmmakers, like this postcard reproduction with producer Zanuck and CinemaScope camera circa 1962 (not 1964) at Pointe du Hoc in Normandy. Sam Shaw was only a visitor as Vincent Rossell was stills photographer. This was in 1963 my first widescreen cinema experience and is half a century later still my favorite black-and-widescreen film, with its exciting aerial and tracking shots. Curiously this best-bw-photography-Oscar winner was colorized later and long unavailable in bw until the DVD. I visited several French locations, saw its composer Maurice Jarre and actress Irina Demick at festivals and interviewed its actor Arnold Gelderman (German soldier opposite Demick)."

"One of several large size A5 postcards from my favorite musical with its impressive music, ballet, design and social issues. No quick cuts and no nervous camera movements but dancers performing their exciting choreography in long shots and long takes. Besides Bridge on the River Kwai I saw it more often than anything else but never watch my DVD as it is the only film from my youth which was always in distribution. Thanks to the Amsterdam EYE Filmmuseum it can be seen on 70mm again."

"I always admired Saul Bass for his brilliant movie title sequences and already visited the Amsterdam Filmmuseum's retrospective in 1969. When I later became involved in the museum's poster collection his printed art added a whole new dimension and I bought many of his vintage posters for their already impressive but uneven collection. This postcard reproduction shows one of his Human Rights poster designs. Not film related? Wrong, because Bass secretly used it again from his own 1956 poster for the Bette Davis movie Storm Center."

"This Amsterdam Vondelpark renaissance palace from 1881, seen on countless vintage postcards like this, was Filmmuseum between 1974 and 2012, almost identical to my long career. Here I discovered Die Nibelungen and Metropolis etc. in total silence because it was not yet fully understood that silents too had music. Many architectural details disappeared long ago but the building's middle stairs will return during its change as a broadcasting studio after 2013." 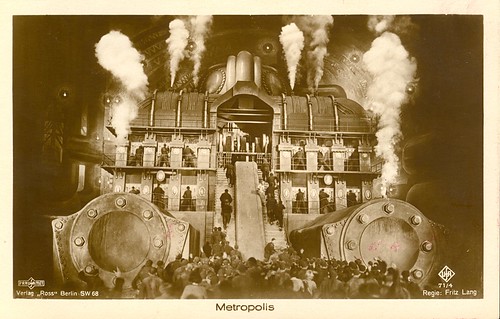 "One of several Dutch postcards from this musical. Besides design I also love dance sequences like those of Astaire-Rogers, Gene Kelly, Bollywood, The Red Shoes, Saura's Carmen, White Nights, Billy Elliot, Mao's Last Dancer etc. Busby Berkeley's choreographies like this postcard are almost a combination of dance and design."

"Many decades I only knew Cinerama from my favorite Amsterdam Bellevue Cinerama 70mm cinema but in 2011 I finally experienced 3-strip projection at the Bradford widescreenfestival with This is Cinerama, seen on this vintage postcard. The closure of the Bellevue cinema in Amsterdam in 2005 triggered my Amsterdam 70mm cinema history website 70mm.nl and I even became a cinema projectionist during the final 35mm years."

"Since a festival in an East Berlin cinema I investigate Soviet widescreen history, including the world's largest and most successful 70mm production which continued until 1989. This is one of several postcards from their most ambitious 70mm film. The dance, fire and battle scenes have many impressive tracking shots and giant crane shots."

"This is my favorite Dutch short fiction film, a sound movie from 1987 without dialogue and resembling silent slapsticks with Buster Keaton, Harold Lloyd etc. It was shot in my home town Alkmaar seen on this postcard, and as a projectionist I was allowed by producer Orlow Seunke a private 35mm screening for a scouting group during an excursion to my Alkmaar arthouse cinema."

All the postcards in this post are from the collection of EYE. Watch the Vondelpark postcard closely: during the 1980s, Jan-Hein used to work in the library at the left part of the Filmmuseum on the ground floor, I worked under the centre roof at the poster collection. Jan-Hein, thanks for all the good work you did all these years and enjoy your party today. Cheers!

Wonderful images and commentary. Many thanks Jan-Hein and Bob. Both of you were fortunate to work in such a beautiful building.