Dynamic Zappy Max (1921-2019) was one of the most popular radio hosts in France and Belgium during the 1950s till the 1970s. He worked for Radio Luxembourg (now RTL) and Radio Monte Carlo (RMC), and his partner was Mr. Champagne. He also appeared in several French films, often as himself. In June 2019, Max passed away at the age of 97. 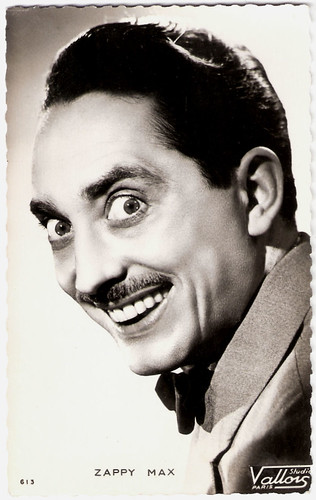 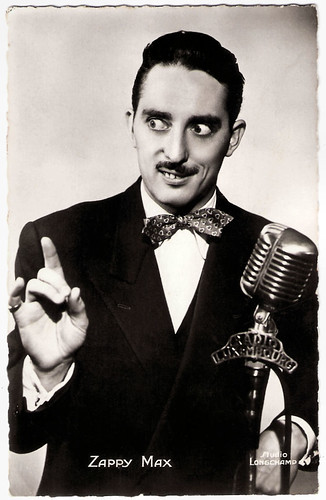 A Passion for the Music-Hall


Zappy Max is the pseudonym of Maxime Doucet, who was born in Paris in 1921. He was the only son of Maxime and Julia Doucet.

He lost his father in 1937. His father passed him a passion for the Music-Hall. In 1941, Zappy began appearing in Music-Halls with the group The 5 Mathurins where he imitated Popeye in English wearing the uniform of the Marines.

In 1945, he became a singer and entertainer at the orchestra of Jacques Hélian, with whom he remained for two years.

In 1947, he went to work for Radio Luxembourg, where he hosted many games such as 'Quitte ou double' (Double or Nothing) and 'Crochet radiophonique'.

The 'Crochet radiophonique' was part of the Radio Circus, a combination of show, talent contest and game show created by Roger Audiffred and Jean Coupan. With Radio Circus, Zappy travelled all over France and Belgium. Radio-Circus gave shows for 10,000 to 20,000 spectators, while promoting Dop shampoo.

For Radio Luxembourg, Zappy made several radio serials: 'Vas-y Zappy' (Go Zappy), 'Ça va bouillir' (It will boil) and 'C'est parti mon Zappy' (It’s gone My Zappy). His contract at Radio Luxembourg ended in 1966 when the station became RTL. His eviction reportedly annoyed him very much.

Max continued his radio career from 1974 until 1982/1983 at Radio Monte Carlo (RMC). There he hosted the game 'Quitte ou double' (Double or Nothing) again. 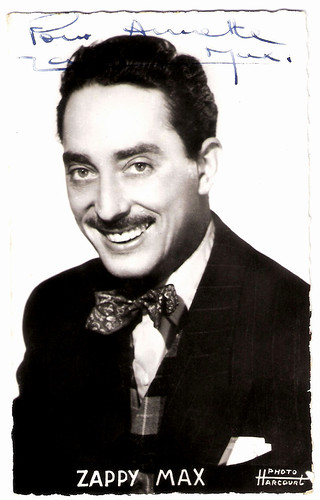 Hamming it up and rolling his eyes every five minutes


Zappy Max performed in plays and in several films. He made his first appearances as an extra. he was a musician in the Fernandel comedy Coeur de coq/Rooster Heart (Maurice Cloche, 1946) and played another bit part in the anthology film Souvenirs perdus/Lost Souvenirs (Christian Jacque, 1950).

Two years later, he appeared as himself in Quitte ou Double/Double or Nothing (Robert Vernay, 1952) with Suzanne Dehelly and Danielle Godet.

Max had his first leading part in the comedy Faites-Moi Confiance/Trust me (Gilles Grangier, 1954) with André Gabriello and Louis de Funès in a supporting part. DB DuMonteil at IMDb is not enthusiastic about Zappy's film antics: "On the screen, to put it mildly, he reveals himself a limited actor, hamming it up and rolling his eyes every five minutes."

There's a reference to his radio show in the classic thriller Les Diaboliques (Henri-Georges Clouzot, 1955): Simone Signoret's tenants are listening to Zappy Max while their landlady is helping to murder her boyfriend.

During the following decades, he did a few more performances in films and TV series. His last film appearance was in the drama Outremer/Overseas (Brigitte Roüan, 1990) with Nicole Garcia and Marianne Basler. 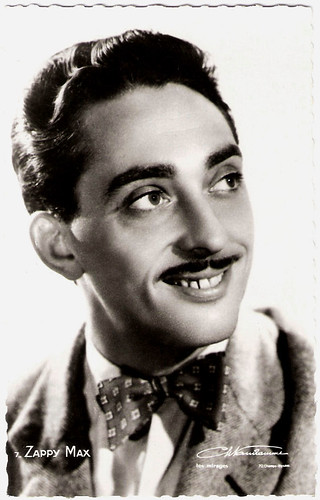 In 2005, he was awarded with the Prix Jean Nohain, and was also honoured as Chevalier (Knight) of the Ordre des Arts et des Lettres (Order of Arts and Letters).

A comic entitled 'Zappy Max: ça va bouillir' (Zappy Max: it's going to boil) was designed by Maurice Tillieux for the journal Pilote in 1959, but it was republished in 2010 by Editions de l'Élan.

That year, Max also published a new book about his passion for the Music-Hall: 'Mes GEANTS du music-hall' (My GIANTS of the Music-Hall).

Indefatigable, he announced a new book, 'Mes Z d'or... Mémoires d'un cinéphile' (My Golden Z ... Memoirs of a film buff), with portraits of his favourite actors.

However, Zappy Max passed away in 2019, before the book was published. He was 97. 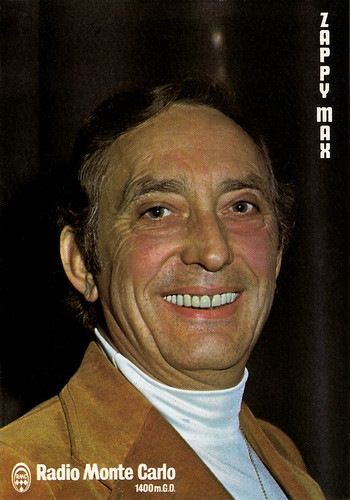 
Scopitone clip for the song Elle S'était Fait Couper Les Cheveux (She had her hair cut) by accordionist Aimable and Zappy Max. The clip was directed by Claude Lelouch. Source: Music Zone 1 (YouTube).