Carlo Aldini (1894-1961) was an athletic hero of the Italian and German silent cinema. The robust but also gentleman-like Aldini often appeared as Ajax or Achilles in sensational historical epics. 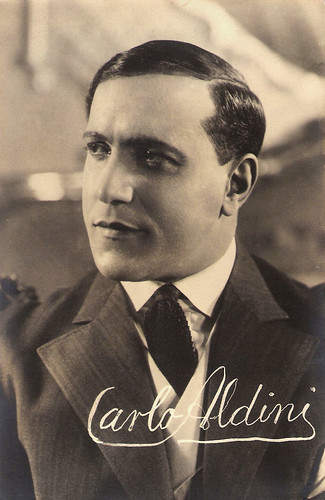 
Carlo Aldini was born in 1894 in Pieve di Fosciano near Lucca, Italy, but he was raised in Bologna. There he frequented the famous gymnastic club of Virtus in 1910-1911 and soon he won matches in all sections.

At the age of 15 he was champion in wrestling, boxing and jumping in the province of Emilia. In 1914 and 1915 he won the national wrestling championship, while in 1916 he won the pentathlon.

At the time, the Italian cinema was keen on athletic men and the Cinegraf studio discovered Aldini in 1920. His debut was in their action adventure La 63 - 7157/The Adventures of Carlo Aldini (Salvo Alberto Salvini, 1920) which featured lots of cars.

Then the Rodolphi film company launched him as Ajax in a series of historical epics, such as Le perle di Cleopatra/The Pearl of Cleopatra (Guido Brignone, 1922). These films were mostly shot in Turin, and the scripts were simple but effective, focusing on how Ajax would restore order and peace.

He also starred in the comic action film  La fuga di Socrate/The Flight of Socrates (Guido Brignone, 1923). In this film, Carlo pursues his fiancee's parrot all over the world. In the end the parrot returns to his mistress, but Carlo dumps his hysterical fiancee for a nice girl he met during his travels. 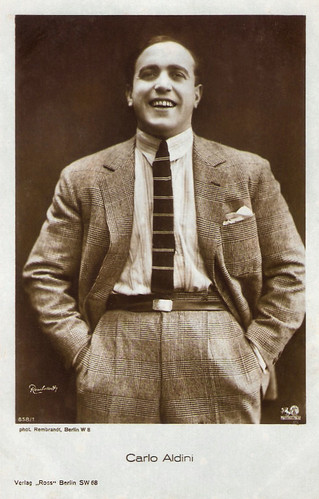 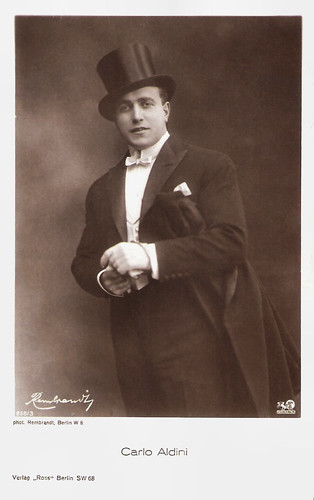 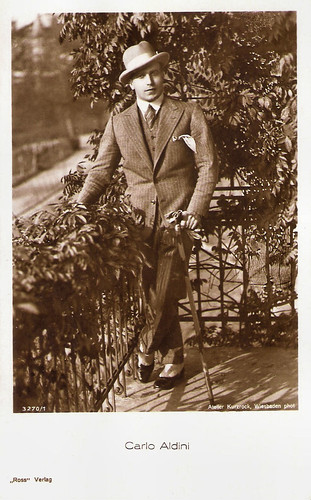 
The Italian film crisis forced Carlo Aldini to move to Berlin where he was well received and starred in a series of 'Sensationsfilmen'.

Memorable is his Achilles in the two-part epic Helena (Manfred Noa, 1924) about the Homeric battle of Troy. Italian actress Edy Darclea played Helen of Troy and Vladimir Gajdarov Paris. In this heroic film Aldini's classic beauty - robust, muscular but also slender and gentleman-like - was expressed best.

In 1926 Carlo Aldini started his own Aldini Film company. Italian director Nunzio Malasomma directed him in various German films such as Jagd auf Menschen/Hunted People (1926) with Maly Delschaft, and Einer gegen alle/One Against All (1927).

He also made films in Great Britain and Czechoslovakia. For a short while Aldini continued to work in German sound film and even directed one film himself: Im Kampf mit der Unterwelt/In the battle with the underworld (1930) with Ruth Weyher.

In 1943 he repatriated to Bologna. His perfect knowledge of German permitted him to act as a mediator between the partisans and the retreating German army in April 1945. This resulted in his house filling up with arms by the Germans to show their surrender.

In Bologna Aldini married Emilia Cella, whom he acquainted in 1945. Carlo Aldini died in 1961 in a hospital in Bologna, his once athletic body ruined by an irreversible disease. 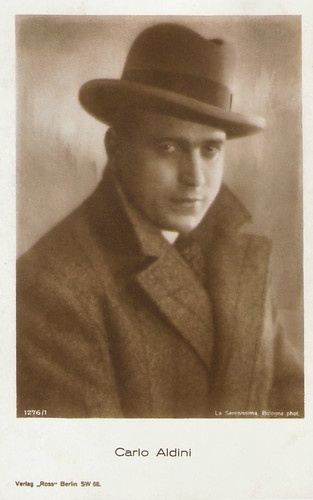 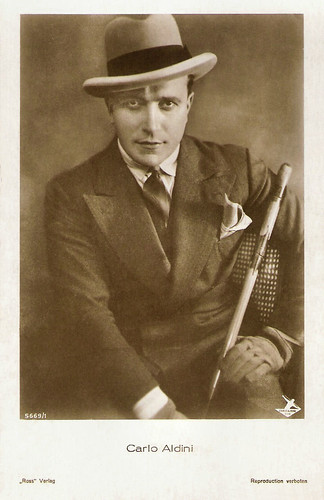