Peter Pasetti (1916–1996) was a German stage, television and film actor. The handsome and incisive character actor played a number of leading roles in post-Second World War productions such as the operetta film Eine Nacht in Venedig/A Night in Venice (1953). From the late 1950s he appeared increasingly on television. 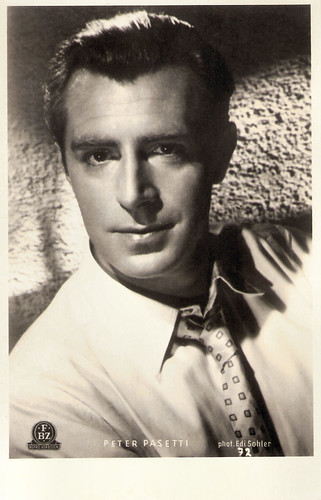 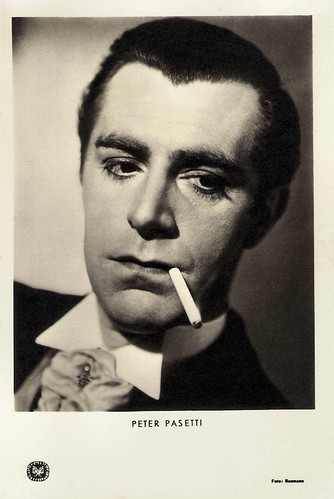 
Peter Viktor Rolf Pasetti was born in München (Munich) in the German Empire in 1916. His father Leo Pasetti was an architect and stage designer for the Bayerischen Staatsoper.

He studied music and acting, and made his stage debut at the Bayerischen Landesbühne. In 1940 he made his film debut in the historical comedy Das Fräulein von Barnhelm/The Girl from Barnhelm (Hans Schweikart, 1940) starring Käthe Gold. It is an adaptation of the classic play Minna von Barnhelm (1767) by Gotthold Ephraim Lessing.

He also had a small part in the drama Venus vor Gericht/Venus on Trial (Hans H. Zerlett, 1941), starring Hannes Stelzer, Hansi Knoteck and Paul Dahlke. The film was part of the Nazi's campaign against 'degenerate art', and depicts the trial of a young artist who has resisted the trend towards it.

Then World War II caused a break in his film career. After the war, Peter Pasetti belonged to the Münchner Kammerspiele, from 1947 till 1979.

In 1948 he returned to the screen in the comedy Die kupferne Hochzeit/The Copper Wedding (Heinz Rühmann, 1948) with Hertha Feiler. His next films were Der Herr vom andern Stern/The Lord from another planet (Heinz Hilpert, 1948) starring Heinz Rühmann, and Du bist nicht allein/You are not alone (Paul Verhoeven, 1949).

In the musical Sensation in San Remo (Georg Jacoby, 1951), Peter Pasetti co-starred with Marika Rökk. The film, partly set at the Sanremo Festival in Italy, was one of Rökk's most successful post-war films. Mart Sander at IMDb: “Very superfluous and light entertainment, where you can predict every word, gesture and action from the beginning to the happy end.”

In the adventure film Jonny rettet Nebrador/Jonny Saves Nebrador (Rudolf Jugert, 1953), he appeared opposite Hans Albers and Margot Hielscher. The film is set in South America, but was shot on location in Italy.

In 1957 Pasetti appeared as Dr. Busch in the DEFA-production Spielbank-Affäre/Casino affair (Arthur Pohl, 1957), next to Gertrud Kückelmann and Jan Hendriks. 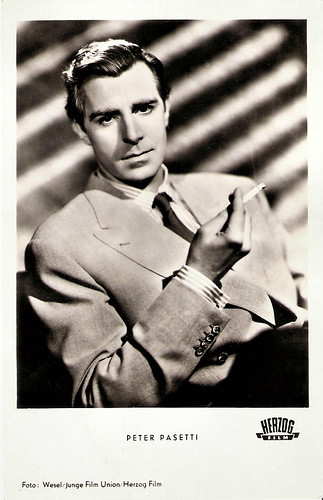 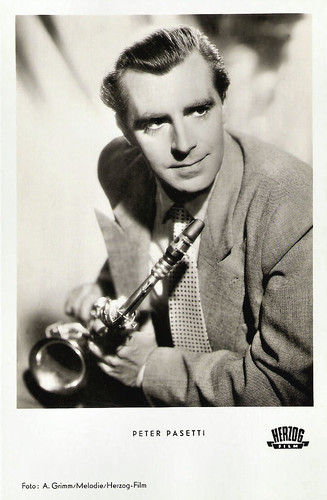 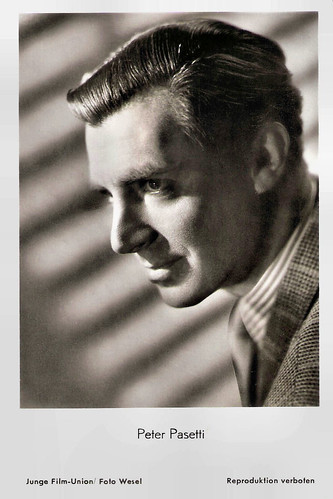 The German voice of Alfred Hitchcock


During the 1960s, 1970s and 1980s, Peter Pasetti focused more on stage and on TV. He played in countless TV series, including Am grünen Strand der Spree (Fritz Umgelter, 1960). At IMDb, Ernst Wiltmann writes about this popular mini-series : “a haunting timetravel to a lost German way of live.“

One of his later films is the drama Die Zeit der Schuldlosen/Time of the Innocent (Thomas Fantl, 1964), starring Erik Schumann. The film premiered at the 14th Berlin International Film Festival in the presence of President Lübcke and his wife, and many other German politicians.

He also could be seen in the film Und Jimmy ging zum Regenbogen/And Jimmy went to the Rainbow (Alfred Vohrer, 1971), which was based on the novel The Caesar Code by Johannes Mario Simmel. It was filmed in Vienna and Munich.

Pasetti played Professor Gaspardi in the melodrama Das Chinesische Wunder/The Chinese Miracle (Wolfgang Liebeneiner, 1977). Jan Onderwater at IMDb: “Not only the subject of the badly written script is boring, Liebeneiner directs with disinterest - and who could blame him. The cast seems to be on heavy drugs, with the exception of Heinz Rühmann who has a fine performance during 30 minutes or so but cannot save the film; and what is his character doing in Hong Kong anyway?”

Peter Pasetti died in 1996 in Dießen am Ammersee, Germany. 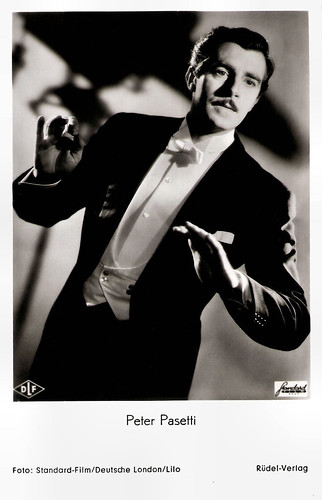 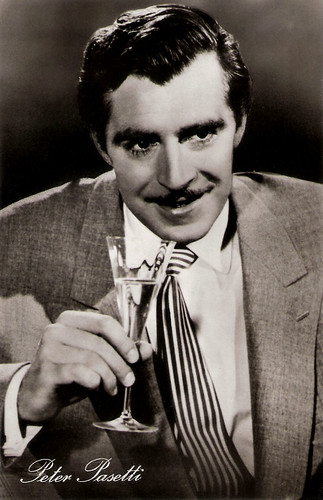