Imported from the USA: Ramon Novarro

Mexican-American actor Ramon Novarro (1899-1968) was promoted as 'The Latin Lover' and became one of the top box office attractions of the 1920s and early 1930s. In 1925 he appeared in his most famous role, as the title character in Ben-Hur: A Tale of the Christ (Fred Niblo, 1925). He later co-starred with Norma Shearer in The Student Prince in Old Heidelberg (Ernst Lubitsch, 1927) and with Greta Garbo in Mata Hari (George Fitzmaurice, 1931). Novarro also worked in the European cinema. In 1968 he was murdered by two young hustlers.

Italian postcard by Ed. Vettori, Bologna, no. 932. Ramon Novarro holding a sketch for the period piece Scaramouche (Rex Ingram, 1923), in which Novarro had the title role. The film, produced by Metro Pictures, was based on a novel by Rafael Sabatini, and co-starred Alice Terry and Lewis Stone. 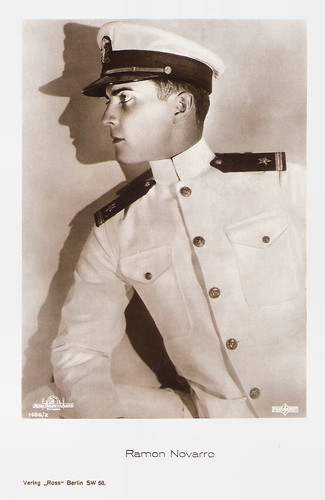 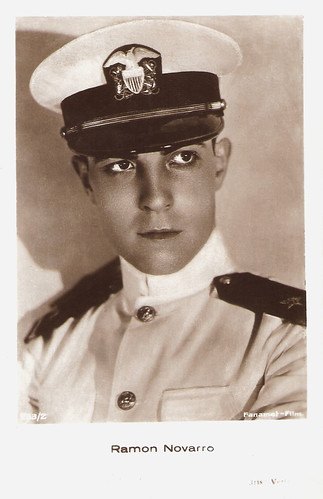 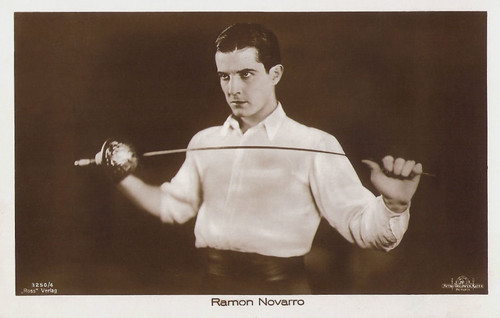 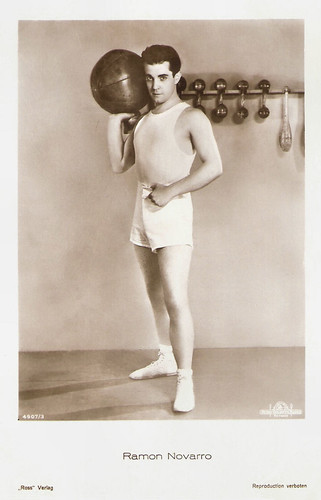 Ramon Novarro was born as Jose Ramón Gil Samaniego in 1899 in Durango, Mexico. His parents were Leonor (Gavilan) and Dr. Mariano N. Samaniego Siqueiros, a prosperous dentist. Ramon and his family moved to Los Angeles in 1913, as refugees from the Mexican Revolution. He was a second cousin of the Mexican film star Dolores del Rio.

The family's wealth having been left behind, young Novarro took on a number of odd jobs, ranging from ballet dancer, piano teacher and singing waiter. In 1917, he became a film extra. Ramon worked as an extra until director Rex Ingram cast him as the lovable scoundrel Rupert of Hentzau in The Prisoner of Zenda (1922) with Lewis Stone and Alice Terry. Ramon scored an immediate hit. He was billed as Ramon Samaniegos and Terry suggested that he would change his name to Novarro. And so he did.

Ramon Novarro worked with Ingram in his next four films. Ingram again teamed him with Terry and Stone in the successful costume adventure Scaramouche (Rex Ingram, 1923). Novarro played a law student who becomes an outlaw French revolutionary when he decides to avenge the unjust killing of his friend. Ron Oliver at IMDb: "Novarro, taking the hero role this time, proved he was no flash in the pan. Equally adept as sensitive lover or dueling revolutionary, with this performance Novarro was catapulted to Hollywood's upper ranks."

Novarro's rising popularity among female moviegoers resulted in his being billed as the 'New Valentino' and as 'The Latin Lover'. In 1925 he appeared in his most famous role, as Judah Ben-Hur in Ben-Hur: A Tale of the Christ (Fred Niblo, 1925). At IMDb, John Nicolaus reviews: "I found Roman Navarro far more likable in the title role than Charlton Heston. Like with most silent films, Navarro is a bit over the top, but he's still portrayed as honest and kind, yet proud figure. He also has a very kind face, which helps the audience 'fall' for this guy."

With Valentino's death in 1926, Novarro became the screen's leading Latin actor. He co-starred with Norma Shearer in The Student Prince in Old Heidelberg (Ernst Lubitsch, 1927). Lubitsch made an enjoyable Viennese fairy tale in which Novarro played a cloistered, overprotected Austrian prince who falls in love with a down-to-earth barmaid (Shearer).

Ron Oliver at IMDb: "This wonderful, exuberant, heartbreaking film - one of the last major movies of the Silent Era - is a scintillating example of the artistry of director Ernst Lubitsch. Filled with wry humor & aching pathos, Lubitsch tells a tale which is a persuasive paean to the power of the talkless film. Ramon Novarro, always eager to please his audience, brings great charm to the title role. Although about 10 years too old to be playing a typical university freshman, he nonetheless brings tremendous enthusiasm to the role." 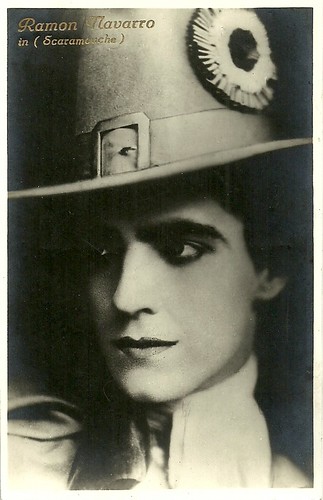 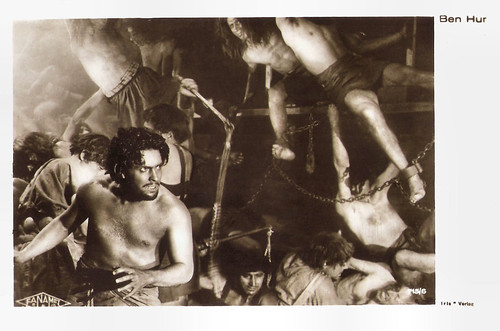 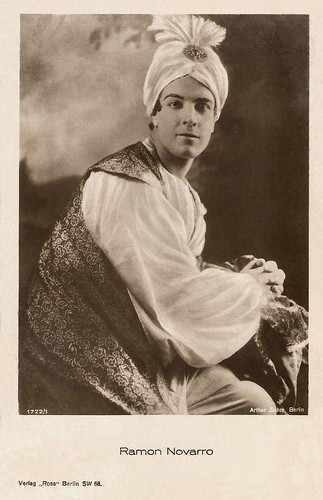 German postcard by Ross Verlag, no. 1722/1, 1927-1928. Photo: Arthur Ziehm, Berlin. Novarro is dressed in the attire of his film A Lover's Oath (Ferdinand P. Earle, 1925), based on Edward Fitzgerald's The Rubaiyat of Omar Khayyam, the Astronomer-Poet of Persia. From this film only a short clip remains. 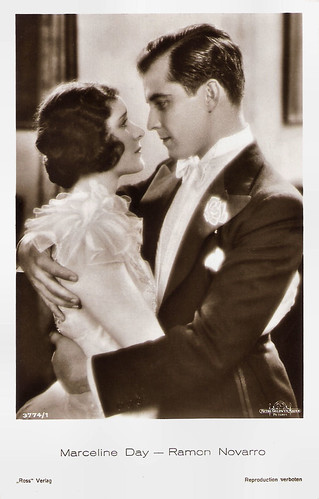 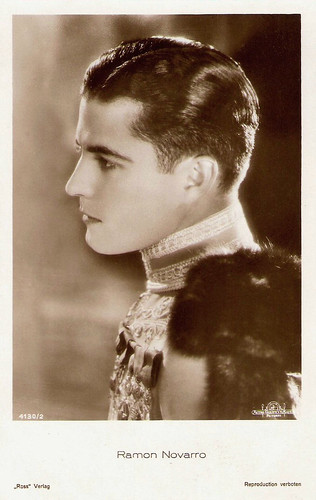 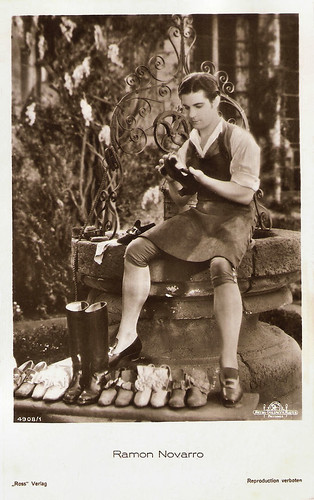 At the peak of his success in the late 1920s and early 1930s, Ramon Novarro was earning more than US$100,000 per film. His first talking picture was Call of the Flesh (Charles Brabin, 1930), where he sang and danced the tango. He continued to appear in musicals, but his popularity was slipping. MGM insisted on giving their Mexican star a wide range of ethnic parts, everything from a carefree South Seas native in The Pagan (W.S. Van Dyke, 1929) to a wealthy Indian jewel merchant in Son of India (Jacques Feyder, 1931).

He was not given many topnotch assignments, but he did star with Greta Garbo in the Mata Hari (George Fitzmaurice, 1931), a semi-fictionalized account of the life of the exotic dancer who was accused of spying for Germany during World War I. She falls in love for the first and only time in her life when she meets dazzlingly handsome lieutenant Ramon Novarro. Ron Oliver at IMDb: "Ramon Novarro, who receives co-equal billing with Garbo, had been an important movie celebrity far longer than she, but her rising sun tended to obscure most other stars in her orbit and Novarro has to work hard to get much notice in their joint scenes. As always, MGM's chameleon actor (this time he plays a Russian) gives a very competent performance, but as a romantic pair they make a rather unusual couple - which simply means that Novarro's sexual ambiguity is perfectly mirrored by Garbo's intrinsic androgyny."

Mata Hari was a success, but soon Novarro's career began to fade fast. In 1935 he left MGM and appeared on Broadway in a show that quickly flopped. Though wealthy enough not to need work, Novarro was restless when not before the cameras. His later career, consisted mostly of cameos. In Europe he was still popular. In France he starred in La comédie du bonheur/Comedy of Happiness (Marcel L'Herbier, 1940) opposite Michel Simon. He also appeared in the Italian version, Ecco la felicità (Marcel L'Herbier, 1940). In Mexico, he starred in La virgen que forjó una patria/The Saint That Forged a Country (Julio Bracho, 1942).

After the war, Novarro returned to Hollywood as a supporting actor and appeared in such films as We Were Strangers (John Huston, 1949) and the Film Noir The Big Steal (Don Siegel, 1949), starring Robert Mitchum. His last film was Heller in Pink Tights (George Cukor, 1960) with Sophia Loren. Later he guest-starred in TV series such as Rawhide (1964), Bonanza (1965) and The High Chaparral (1968).

Ramon Novarro was troubled all his life by his conflicted feelings toward his Roman Catholic religion and his homosexuality. His life-long struggle with alcoholism is often traced to these issues. He was romantically involved with journalist Herbert Howe, who was also his publicist in the late 1920s. In 1968, Novarro was savagely beaten in his North Hollywood home by two young hustlers, the brothers Paul and Tom Ferguson, aged 22 and 17. They had heard - in error - that a large sum of money was locked away somewhere in his home. They never found any money, and Novarro was discovered dead the next day by his servant. Novarro died as a result of asphyxiation—having choked to death on his own blood after being beaten. He was less than four months away from what would have been his 70th birthday. 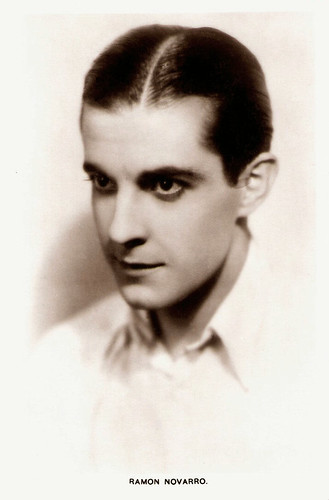 British postcard in the Picturegoer Series, London, no. 58b. 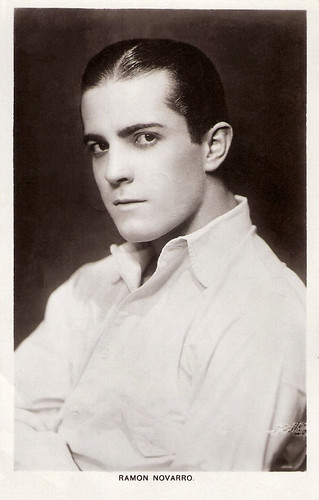 British postcard in the Picturegoer Series, London, no. 93. Sent by mail in 1931. 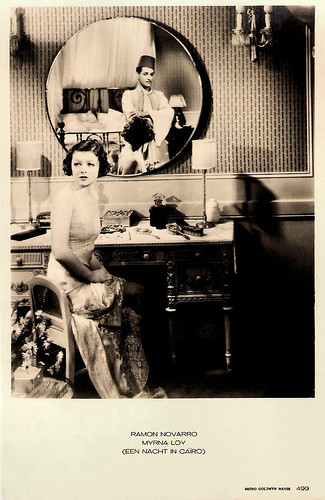 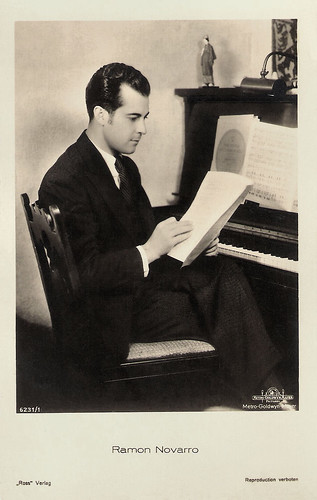 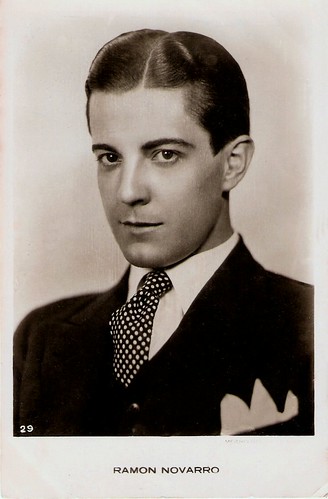 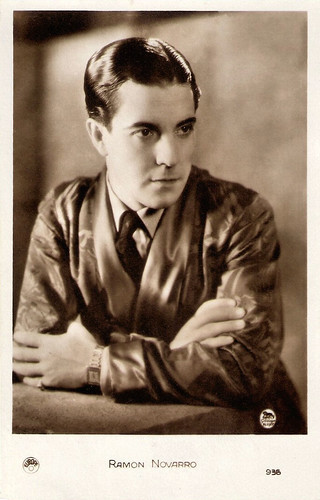 I've just downloaded iStripper, so I can have the best virtual strippers on my taskbar.