Original and versatile Monica Vitti (1931) is one of Italy's most famous actresses of the 20th century. She is most widely noted in the early 1960s for her starring roles in four classic avant-garde films directed by Michelangelo Antonioni. Later the glamorous blonde became the queen of the commedia all’italiana, a film genre previously restricted to men. 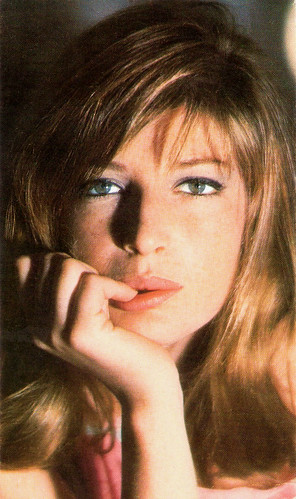 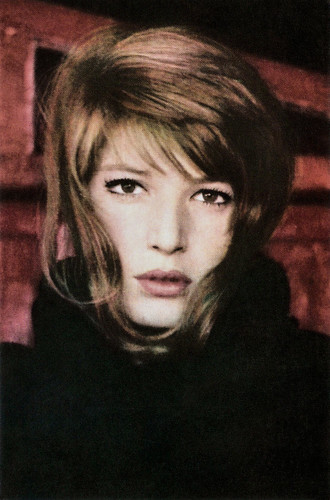 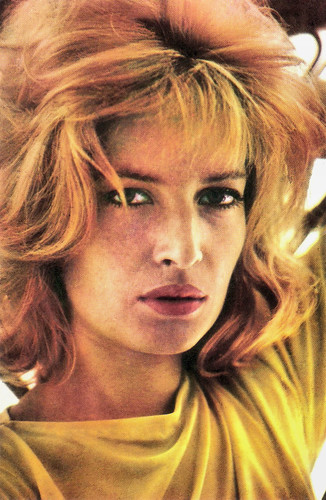 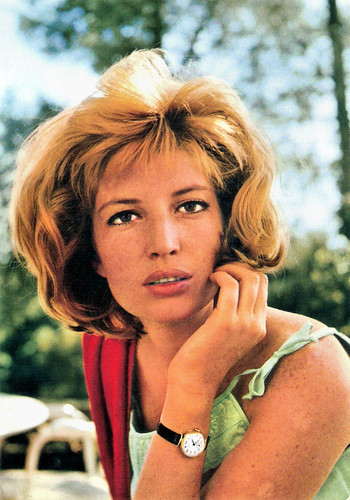 Italian postcard by Rotalcolor, no. 146. 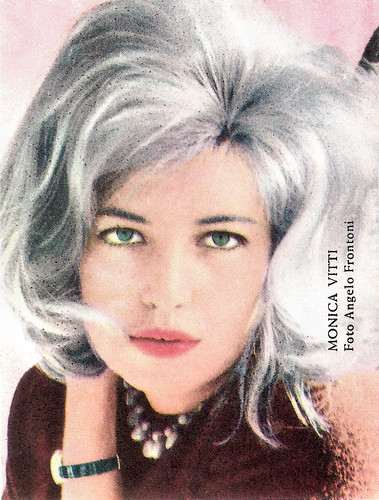 Monica Vitti was born Maria Luisa Ceciarelli in Rome, in 1931. She studied at Pittman's College, where she played as a teen in a charity performance of Dario Niccodemi's La nemica (The Enemy). She then trained as an actor at the Accademia Nazionale d'Arte Drammatica (Rome's National Academy of Dramatic Arts) where she graduated in 1953.

She toured Germany with an Italian acting troupe and her first stage appearance in Rome was for a production of Niccolò Machiavelli's La Mandragola (The Mandragola). Vitti's film debut was an uncredited bit part in the comedy Ridere! Ridere! Ridere!/Laugh! Laugh! Laugh! (Edoardo Anton, 1954) with Tino Scotti and Ugo Tognazzi. Her first widely noted performance was at the age of 26 in the comedy Le dritte/Smart Girls (Mario Amendola, 1958) starring Franco Fabrizi.

In L’avventura a group of rich Italians head out on a yachting trip to a deserted volcanic island in the Mediterranean. When they are about to leave the island, they find Anna (Lea Massari), the main character up to this point, has gone missing. Sandro, Anna's boyfriend (Gabriele Ferzetti), and Claudia (Monica Vitti), Anna's friend, try without success to find her. While looking Anna, Claudia and Sandro develop an attraction for each other. They proceed to become lovers, and all but forget about the missing Anna.

Vitti as the detached and cool Claudia gave a stunning screen presence. She also helped Antonioni raise money for the production and stuck with him through daunting location shooting. L'avventura made Vitti an international star and one of Italy's most famous actresses of the 20th century. Her image later even appeared on an Italian postage stamp commemorating the film. 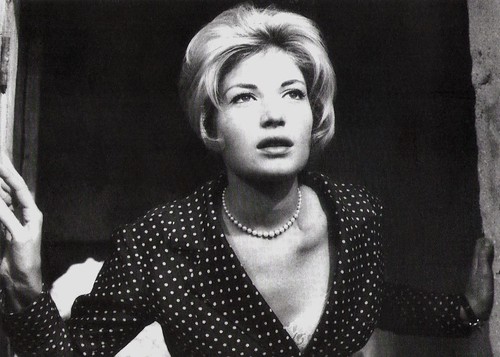 British postcard by BFI and The Screen on the Hill, for the British re-release in 1995. Photo: publicity still for L'avventura (Michelangelo Antonioni, 1960). 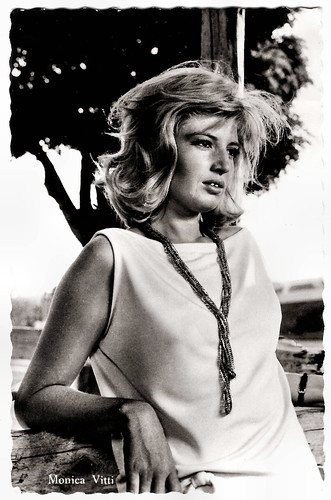 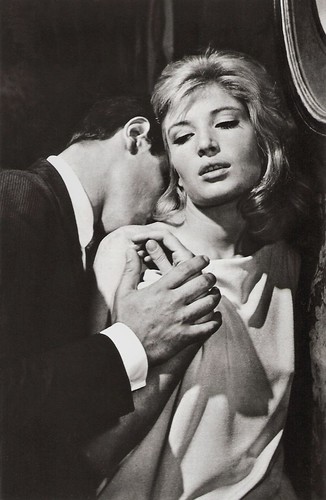 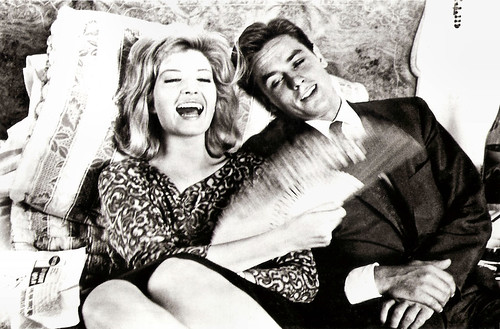 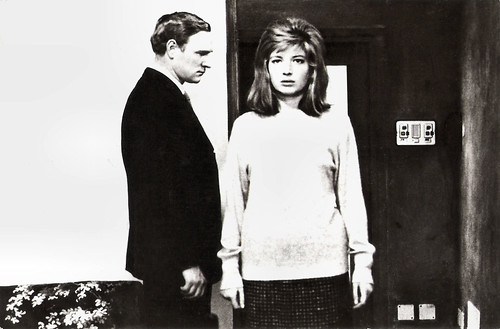 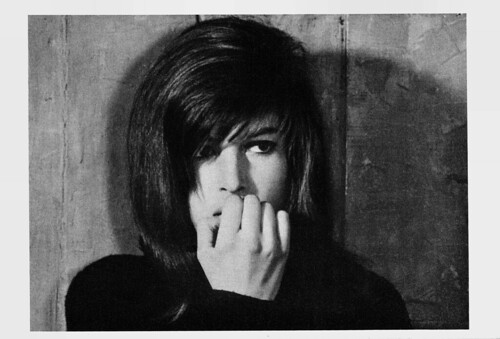 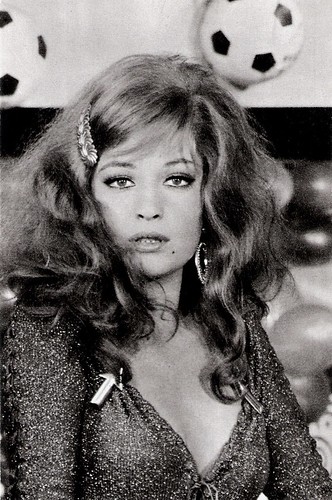 Modernist Consciousness in the 1960s

In the four films Antonioni explores modernist consciousness in the 1960s. In her portrayal of deeply troubled middle-class women, unable to establish satisfying relationships and incapable of connecting with their environment, the beautiful Vitti came to embody the modernist dilemma in all its complexity and angst.

Hal Erickson at AllMovie even calls her ‘The high priestess of frosty sensuality’. In La notte she plays the daughter of a wealthy industrialist who tries to inaugurate an empty affair with a married author, played by Marcello Mastroianni. In L’eclisse she plays Vittoria, a young translator who meets the vital broker Piero (Alain Delon) during a crash in the Stock Market but the love affair is doomed because of Piero’s materialistic nature. In Il deserto rosso she was Giuliana, a housewife married to a factory manager. She is mentally ill, but hides it from her husband as best she can. She meets the engineer Zeller (Richard Harris) who takes advantage of her distress, and then she is again alone and ill.

She also starred in films by other directors, such as Château en Suède/Nutty Naughty Chateau (Roger Vadim, 1963) with Jean-Claude Brialy, and the comedy Il disco volante/The Flying Saucer (Tinto Brass, 1964) with Alberto Sordi and Silvana Mangano.

Vitti appeared in only two English language films. She starred in the title role of Joseph Losey's Modesty Blaise (1966), a mod James Bond spy spoof with Terence Stamp and Dirk Bogarde which had only mixed success and received harsh critical reviews. Her second English language film was An Almost Perfect Affair (Michael Ritchie, 1979) with Keith Carradine, which takes place during the Cannes Film Festival. 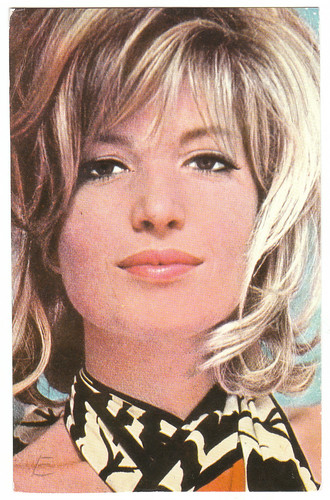 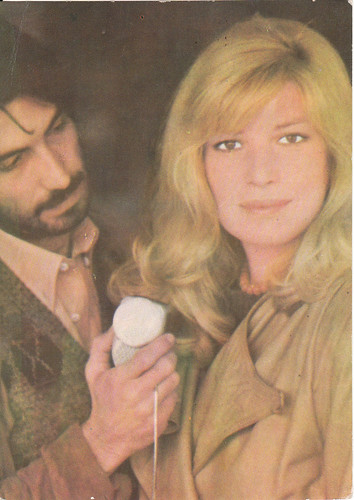 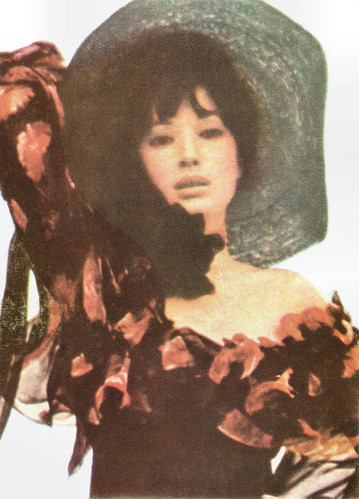 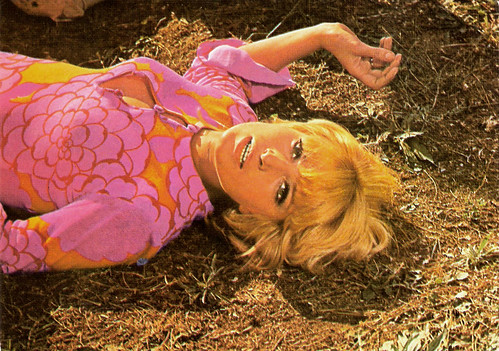 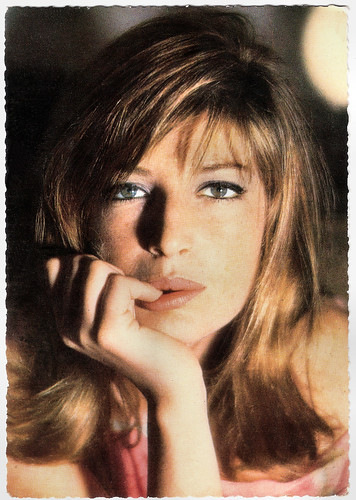 In the mid 1960s Monica Vitti decided to switch genre, and returned to the light comedy that was clearly her forte. After a few uncertain performances, she gained enormous public recognition with La ragazza con la pistola/The Girl with a Pistol (Mario Monicelli, 1968), in which she plays the unlikely role of a Sicilian woman seeking revenge in London.

She achieved ever greater success in Amore mio, aiutami/Help Me My Love (Alberto Sordi, 1969), on the theme of marital infidelity, and Scola's romantic comedy Dramma della gelosia/The Pizza Triangle (Ettore Scola, 1970) about a working-class love triangle with Marcello Mastroianni and Giancarlo Giannini.

Throughout the 1970s Monica Vitti appeared mostly in Italian films which did not have international distribution. There were a few exceptions. She starred in Buñuel's innovative Le Fantôme de la liberté/The Phantom of Liberty (Luis Buñuel, 1974) and the political thriller La raison d'état/State Reasons (André Cayatte, 1978) with Jean Yanne. In 1974 she won the David di Donatello award for Best Actress in Polvere di stelle/Stardust (Alberto Sordi, 1973), an emotional recreation of the world of variety. She won this Italian award five times.

In 1980 after 15 years she reunited with Antonioni for his Il mistero di Oberwald/The Mystery of Oberwald (Michelangelo Antonioni, 1980) which was one of the first major international feature films to be shot on video. Based on a screenplay by Jean Cocteau it tells the story of fugitive Sebastian (Franco Branciaroli), who breaks into the castle at Oberwald to kill the Queen (Monica Vitti), but faints before doing so. He is the splitting image of the King who was assassinated on his wedding day. The Queen discovers that Sebastian once wrote a subversive poem that she liked, even though it was attacking her. The Queen dares Sebastian to kill her, otherwise she vows to kill him.

During the 1980s Monica Vitti did much less screen work. By 1986 she had returned to the theatre as an actress and teacher. In 1989, Vitti wrote, directed and starred in Scandalo Segreto/Secret Scandal (1989) with Elliot Gould. The film was well received critically but met with limited box-office success. She then retired from the cinema. During the 1990s she did television work, both acting and directing. In 1993 she was awarded the Festival Tribute at the Créteil International Women's Film Festival in France.

In 1995 Monica Vitti married photographer Roberto Russo, with whom she had lived since 1975. Alzheimer's disease has removed her from the public gaze for the last 15 years.

Long tall cool Monica. A wonderful piece about this iconic actress. I enjoyed it very much. Thank you Bob.

Thanks for including Monica, I have been fascinated by her since I saw those early Antonioni's in the 60s. She is wonderful in a '69 French comedy 'The Scarlet Lady' with Maurice Ronet.

Thanks. She is cool, isn't she? I haven't seen The Scarlet Lady, but last year I discovered L'éclisse. I saw the film for the first time when I was in Rome. We went to visit all the places where L'éclisse was filmed in EUR. Her apartment was still there, the house of her ex-lover, the water tower. Not that much had changed. A very special trip.