Dark-haired Hollywood beauty Yvonne De Carlo (1922–2007) was a Canadian American actress, singer, and dancer whose career in film, television, and musical theatre spanned six decades. From the 1950s on, she also starred in British and Italian films. She achieved her greatest popularity as the ghoulish matriarch Lily in the TV sitcom The Munsters (1964-1966). 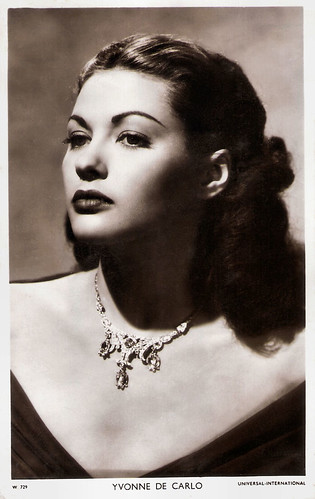 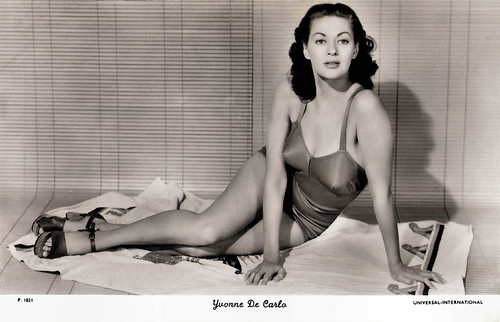 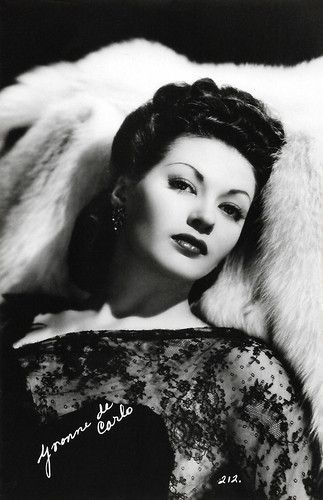 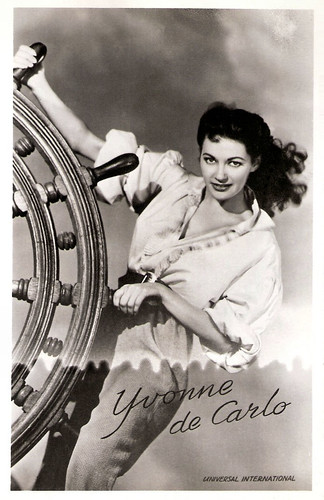 The most beautiful girl in the world

Yvonne De Carlo was born Margaret Yvonne Middleton in 1922 in West Point Grey (now part of Vancouver), British Columbia, Canada. She was the only child of William Middleton, an Australian-born salesman, and Marie DeCarlo, a French-born aspiring actress. Her father deserted the home, leaving her mother to make a living as a waitress. When De Carlo was ten her mother enrolled her in a local dance school and also saw that she studied dramatics. De Carlo and her mother made several trips to Los Angeles to seek fame and fortune in Hollywood.

In 1940, she was first runner-up to Miss Venice Beach, and she also came fifth in the 1940s Miss California competition. A year later, she landed a bit part as a bathing beauty in Harvard, Here I Come (Lew Landers, 1941). She also appeared in the three-minute Soundies musical, The Lamp of Memory (1942), shown in coin-operated movie jukeboxes. Other roles were slow to follow, and De Carlo took a job in the chorus line of Earl Carroll. During World War II she performed for U.S. servicemen and received many letters from GIs.

She got her big break when she was chosen over a reported 20,000 girls to play the lead role as a European seductress in the Technicolor spectacle Salome, Where She Danced (Charles Lamont, 1945), with Rod Cameron and Walter Slezak. She played a dancer during the Austrian-Prussian war who is forced to flee her country after she is accused of being a spy and ends up in a lawless western town in Arizona. Producer Walter Wanger described her as "the most beautiful girl in the world." Though not a critical success, it was a box office favourite, and the heavily-promoted De Carlo was hailed as an up-and-coming star. Universal signed her to a long-term contract.

De Carlo was given a small role in the prison film Brute Force (Jules Dassin, 1947), starring Burt Lancaster. Two years later she was again cast opposite Lancaster in her first important role in the classic Film Noir Criss Cross (Robert Siodmak, 1949). Claudio Carvalho at IMDb: "Burt Lancaster has an outstanding performance in the role of an honest man obsessed with his former wife, who becomes a criminal trying to regain the love of his fickle ex-wife. Yvonne De Carlo is also perfect and very beautiful, in the role of a cold and manipulative woman, being a perfect 'femme-fatale'."

However, Universal preferred to cast De Carlo in more conventional fare, such as Casbah (John Berry, 1948) a musical remake of the 1938 film Algiers, the adventure film River Lady (George Sherman, 1948), and Buccaneer's Girl (Frederick de Cordova, 1950). In the latter, she played a New Orleans singer who becomes involved with a Pirate Lord (Philip Friend). 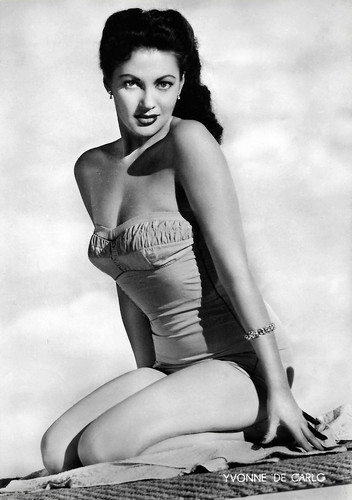 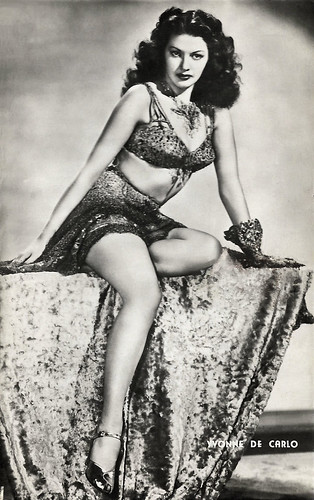 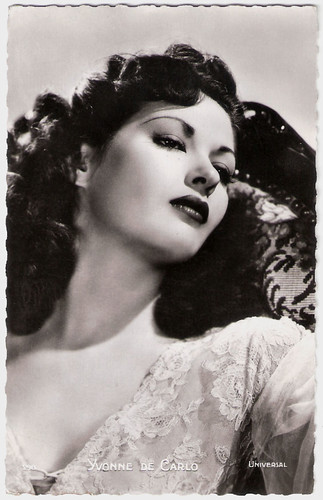 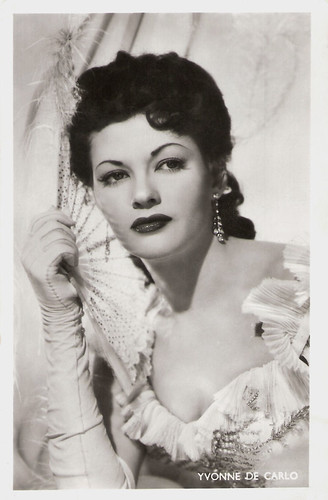 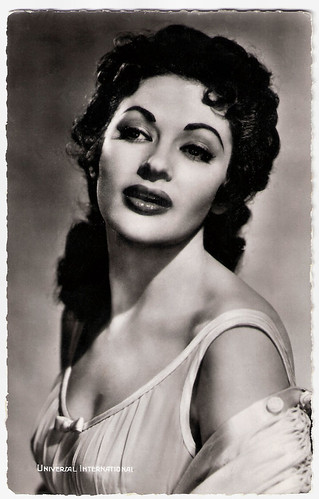 When Yvonne De Carlo was in England making Hotel Sahara (Ken Annakin, 1951), she asked Universal for a release of her contract even though she still had three months to go. The studio agreed. De Carlo had always travelled extensively to promote her films and her appearances were widely publicised. In 1951 she became the first American star to visit Israel.

De Carlo regularly played in European films from now on. She starred in the British comedy The Captain's Paradise (Anthony Kimmins, 1953), about a captain of a ferry boat between the restricted British colony in Gibraltar and Spanish Morocco (Alec Guinness) who keeps two wives in separate ports. De Carlo of course played the hot-blooded mistress, Nita in Tangiers. She persuaded director Anthony Kimmins to talk Alec Guinness into doing the mambo with her in a nightclub sequence. Guinness, not usually thought of as a physical actor, consented to a week's worth of dance lessons from De Carlo and the sequence is one of the film's highlights.

In England, Yvonne De Carlo also co-starred with David Niven in the comedy Happy Ever After (Mario Zampi, 1954). Her film career reached its peak when director Cecil B. DeMille cast her as Sephora, the wife of Moses (Charlton Heston) in his biblical epic The Ten Commandments (1956). It was to be her most prominent role.

In 1964, De Carlo was deeply in debt, her film career was over and she was suffering from depression. Then, she was offered the role of Lily Munster, the wife of Herman Munster, in the legendary TV sitcom The Munsters (1964-1966). The Munsters are a weird but honest family. Herman, the father (Fred Gwynne) is Frankenstein's monster. Lily, his wife (Yvonne De Carlo), and the cigar-chomping Grandpa, her father (Al Lewis) are vampires. Their little son Eddie (Butch Patrick) is a werewolf. Their niece Marilyn (Pat Priest) is the only normal one. She is the ugly duck of the family. The sitcom went on the air in 1964 and lasted only two seasons, but achieved a kind of pop-culture immortality in decades of reruns and movie and television spinoffs.

Wolfgang Saxon in The New York Times: "In her cape and robes and with a streak of white in her black hair, Miss De Carlo’s Lily was a glamorous ghoul and a kind of Bride of Frankenstein as a homemaker, “dusting” her gothic mansion at 1313 Mockingbird Lane with a vacuum cleaner set on reverse. The humor mostly derived from the family members’ oblivious belief that they were no different from their neighbors." After the show's cancellation, De Carlo reprised the role as Lily Munster in the Technicolor film Munster, Go Home! (Earl Bellamy, 1966).

After 1967, De Carlo became increasingly active in musicals, appearing in off-Broadway productions of Pal Joey and Catch Me If You Can. Her defining stage role was as Carlotta Campion in the original Broadway cast of Stephen Sondheim's musical Follies (1971-1972). Playing a washed-up star at a reunion of old theater colleagues, she introduced the song I'm Still Here, which would become well-known.

Yvonne De Carlo married stuntman Robert Drew Morgan, whom she met on the set of the Western Shotgun (Lesley Selander, 1955). They had two sons, Bruce Ross (1956) and Michael (1957-1997). After Bob Morgan's untimely accident, De Carlo was dismissed from her contract at Metro-Goldwyn-Mayer in 1960. Morgan became an alcoholic and they divorced in 1974.

De Carlo kept appearing in films and TV series. After her role in the TV Movie The Barefoot Executive (Susan Seidelman, 1995), she retired from acting at age 72. In 2007, she died from heart failure in Los Angeles. De Carlo was 84. 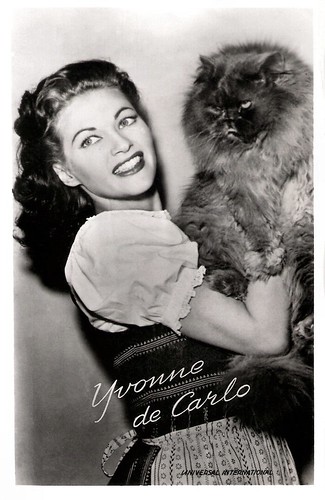 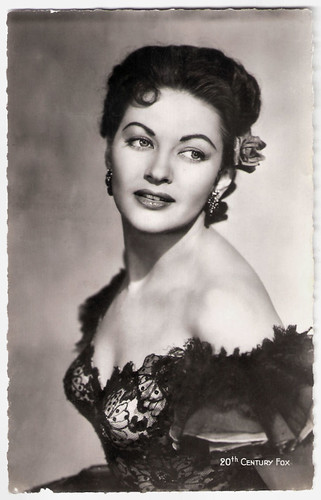 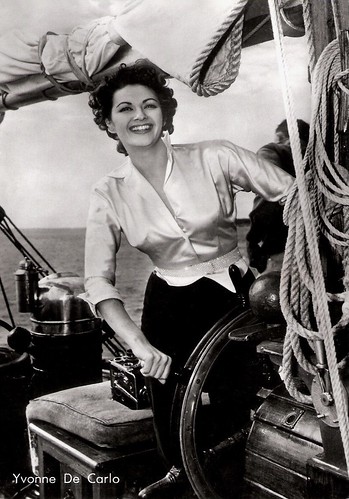 Italian postcard by Bromostampa, Milano, no. 209. 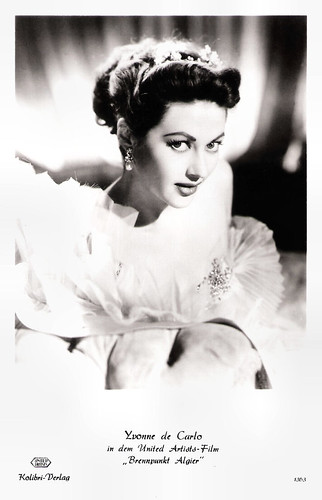 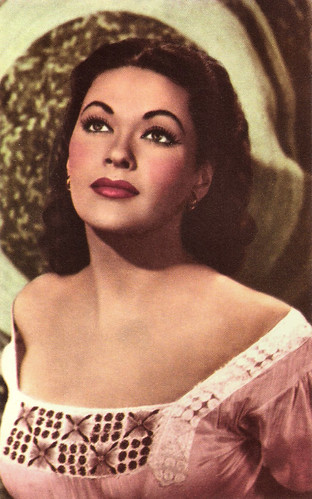 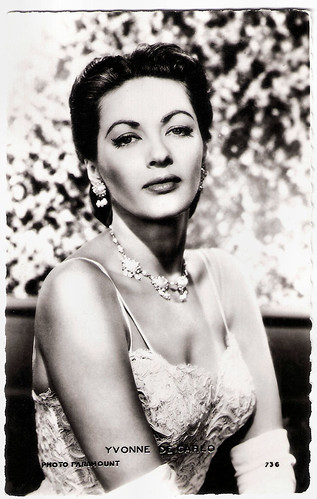 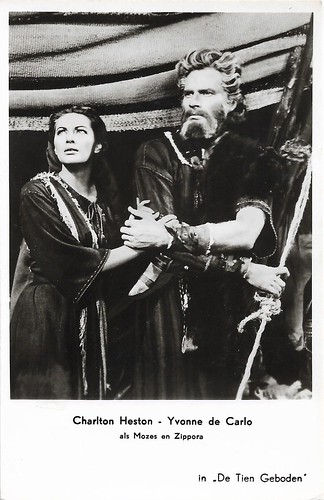 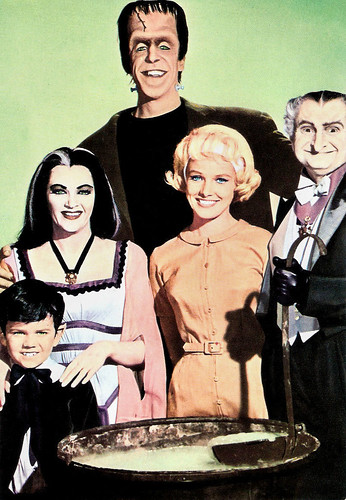 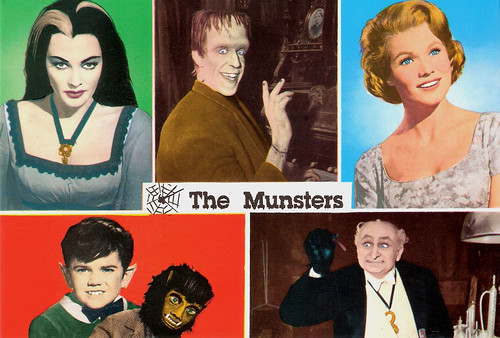