Russian actor Vitali Konyayev (1937) is honored as a people’s artist of Russia. Next to his theatre work, he appeared in a dozen films and he also worked as a director and acting teacher. 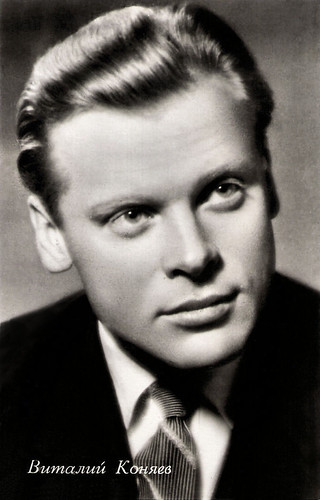 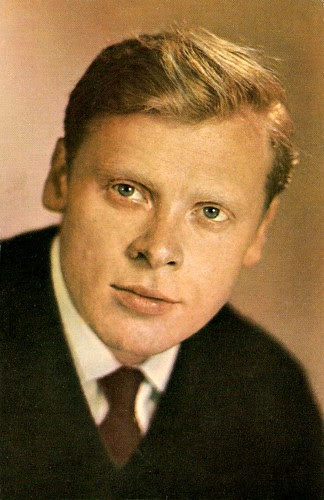 Russian postcard by Izdanije Byuro Propogandy Sovietskogo Kinoiskusstva, no. A 03168, 1965. Photo: B. Vilenkin, G. Ter-Ovanesov. (This postcard was printed in an edition of 200.000 cards. The price was 8 kop.)


Vitali A. Konyaev (in Russian written as Виталий Коняев and in French as Vitali Koniaev) was born in Kronstadt in the former Soviet Union, now Russia, in 1937. from 1954 till 1958, he studied acting with L. Volkova at the M. S. Schepkin Higher Theatre School and from 1958 he worked for the State Academic Maly Theater.

In 1958 he also made his film debut with a small part in Stuchis' v lyubuyu dver'/Knock On Any Door (Mariya Fyodorova, 1958). More roles soon followed in films like Nasch Korrespondent/Our Correspondent (Anatoli Granik, 1958) and the lead role in Pesnya o Koltsove/A Song about Koltsov (Vladimir Gerasimov II, 1959), about the life of Russian poet Alexey Koltsov.

Konyaev played a supporting part in Chistoe nebo/Clear Skies (Grigori Chukhrai, 1961), a drama starring Yevgeny Urbansky. It is the story of a Soviet test pilot taken prisoner by the Nazis during World War II only to find himself expelled from the Communist Party on his release. Fired from his job, and deprived of all decorations, he becomes a drunk. His only solace lies in the love of his wife, as she challenges him to right the wrongs done to him.

This film was possible only after Joseph Stalin's death when his successor Nikita Khrushchev in 1956 denounced the 'cult of personality' and all of Stalin's purges. Still, Chukhrai had a hard and very delicate task on his hands because he had to portray the issue while still following the propaganda guide-lines and affirming the righteousness of the whole communist system, so that the film would actually pass the censors. He told the story seen through the eyes of the young wife of the pilot, played by Nina Drobysheva. Konyayev would later marry Drobysheva.

Next Vitali Konyaev played one of the leading roles in Tishina/Silence (Vladimir Basov, 1963) based on the novel by Yuri Bondareva. In this film, a young World War II hero's moral and political resolve is tested when he and his father are drummed out of the Communist Party.

At AllMovie, Dan Pavlides writes: "Sergei (Vitali Konyayev) resents his father for taking a lover, but his morals do not stop his own affair with a woman separated from her husband. After the war, Sergei enters the institute hoping to further his education, but he too is kicked out of the Party and the institute for the sins of his father. Vladimir Basov, a famous character actor in his own right, directed the film that was seen by over 50 million people in the USSR alone. This is one of the last films that fell under the political thaw period under Khruschev and openly depicted Stalinist oppression."

The film won the Grand Prize at the Vsesoyuznyy kinofestival (All-Union Film Festival) in Leningrad in 1964. That same year, Leonid Brezhnev rose to power and this sort of commentary would once again be forbidden. 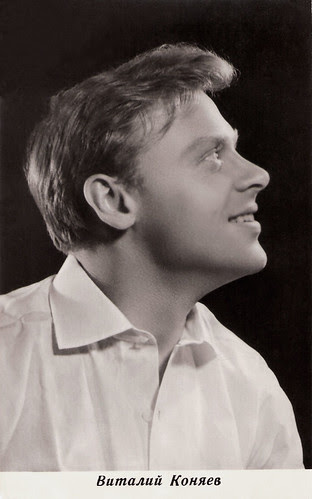 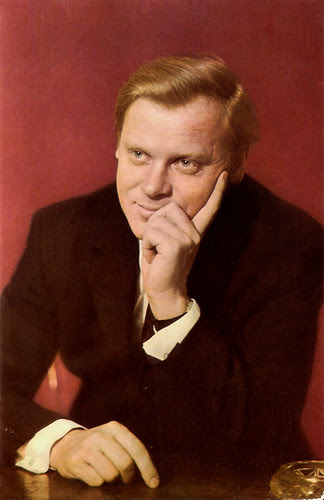 The Red and the White


Vitali Konyaev had a small part in the controversial Hungarian-Soviet co-production Csillagosok, katonák/The Red and the White (Miklós Jancsó, 1967). The film was originally commissioned to celebrate the 50th anniversary of the October Revolution in Russia in which the Bolsheviks took power.

However, director Miklós Jancsó chose to use a radically different approach to the film than was expected. As a result, the film was not well received in Russia, where it was first re-edited to put a more heroic spin on the war for its premiere and then banned. However, in Hungary and in the West it was favourably received and it had a theatrical release in many countries.

From 1972 till 1982 he worked as a teacher at the M.S. Schepkin Higher Theatre School. During this period he played in the TV-series Variant ‘Оmegа’/Option ‘Omega’ (Antonis Vogiazos, 1975) and the adventure film Tovarishch Innokentiy/Comrade Innocent (Yevgeni Mezentsev, Iosif Shapiro, 1981).

More recent films in which he played small parts were the German-Russian coproduction Ubit drakona/To Kill a Dragon (Mark Zakharov, 1988) and the black comedy Vystrel v grobu/Shot in a Coffin (Nikolai Zaseyev, 1992). In 1998 Vitali Konyayev was given the title of People's Artist of Russia.

Vitali Konyaev is married to Tatiana Konyaeva-Stanislavski. He has a daughter, actress Yelena Drobysheva (1964), and a son, Dmitry V. Konyaev (1987).

Thanks Nelson. I'll visit your blog too.